The morgue the merrier! Thieves break into mortuary and steal ‘exhumation liquids’ to get drunk on

The morgue the merrier! Thieves break into mortuary and steal ‘exhumation liquids’ to get drunk on during South Africa’s coronavirus booze ban

Thirsty thieves who broke into a mortuary during a nationwide booze ban are feared to have stolen gallons of ghostly exhumation fluid to get drunk on.

South Africa is into its seventh week of coronavirus lockdown and one of the most hated restrictions is the total prohibition of buying or selling any type of alcohol.

The nation has gone home brew mad stripping supermarkets of pineapples in their tens of thousands a day to just to make a potent tropical beer they can get a hit from.

South Africa is into its seventh week of coronavirus lockdown and one of the most hated restrictions is the total prohibition of buying or selling any type of alcohol. Pictured, a closed liquor store in Hillbrow, Johannesburg, on April 17

But in the latest incredible twist it would seem desperate drinkers forced their way into the Rest in Peace Funeral Parlour in Clocolan in Free State Province to get pickled.

They stole four gallons of the of 97 per cent proof exhumation liquid contained in two 2kg bottles which is usually used to preserve body parts if dead bodies have to be dug up.

Police spokesperson Brigadier Motansi Makhele said the burglars had broken down the roller blinds of the mortuary first to gain entrance then broken into a steel cabinet.

They villains seem to have targeted the exhumation liquid which was securely locked away and as they left also stole some embalming powder and the mortuary first aid kit. 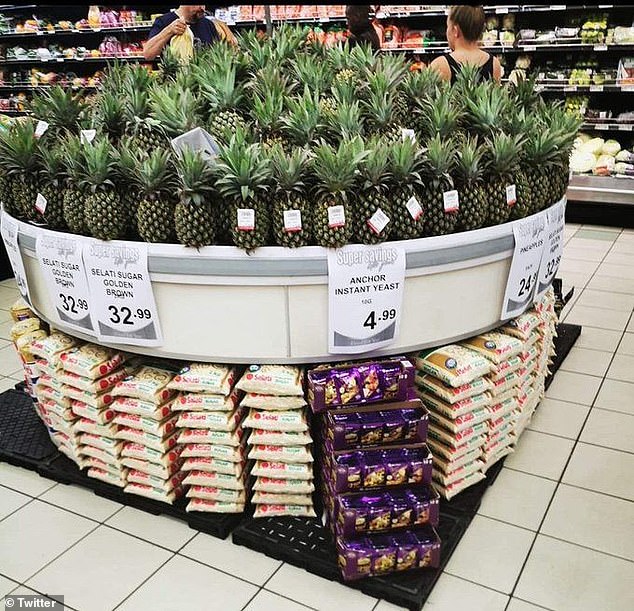 Supermarkets cash in on the Pineapple Beer home brew craze by selling everything you need to get started on one counter – the tropical fruit, yeast and sugar – to make your own booze during the alcohol lock down in South Africa

Brigadier Makehele said: ‘Exhumation liquid is 97 per cent alcohol and preserves body parts if the remains of a deceased person are dug up from the grave for further investigation.

‘It also helps to prevent the body from smelling and prevents infections to humans. We do not know for sure what the purpose of the theft of the liquid actually was yet.

‘A case of business burglary is being investigated and no-one has been arrested yet’.

A Forensic Officer with the Government Mortuary Department said: ‘If the thieves drink that liquid without watering it right down then they will drop dead themselves!

‘The liquid would make a very good sanitiser as it is nearly 100 per cent proof but as for drinking it then they would end up alongside those already in the funeral parlour,’ she said. 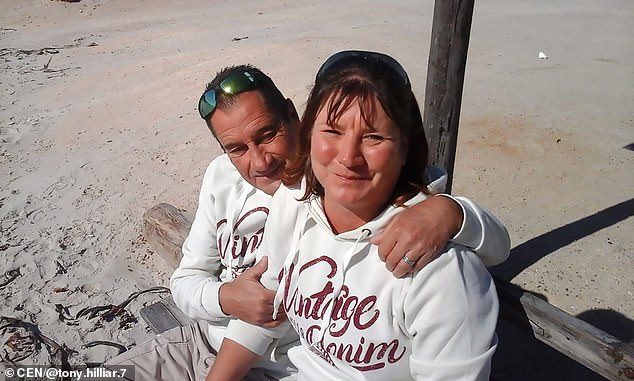 South African couple Tony Hilliar, 54, and Alida Fouche, 42, died after making their own illicit supply of beer to get around their country’s strict alcohol ban

A South African Police source said: ‘There does not seem to be any other logical reason for the thieves stealing this liquid unless they thought they could get drunk on it.

‘It is rocket fuel without a doubt at 97 per cent proof and if they do have a party with it one thing is for sure they will wake up with one hell of a hangover.’

Nobody was available for comment at the Rest in Peace Funeral Parlour today.

Last week loving couple Tony Hilliar, 54, and Alida Fouche, 42, both died in agony after drinking a batch of home-brew they had made themselves to get round the alcohol ban.

They collapsed at their home in Port Nolloth in Northern Cape Province, South Africa.

When the emergency services arrived secretary Alida was already dead and estate agent Tony was writhing on the floor in agony and died two days later in hospital.

Police investigators sent two empty bottles of home brew beer they had downed for forensic testing fearing that they died from a form of alcohol poisoning.

The rest of the batch which had not been drunk was also taken away for laboratory testing.

South Africa went into Covid-19 lockdown on March 26 and one of the strictest restrictions was the total ban on the sale or purchase of any type of alcohol.