The most eye-catching hotel designs that were never built

They were meant to be the most jaw-dropping hotels that the world – and even the moon – had ever seen.

But from diamond-shaped orbs to Aztec-shaped pyramids, some hotel designs turned out to be just too ambitious and expensive.

The Fourth Grace Hotel was designed by renowned British architect Will Alsop and was set to be built on Liverpool’s Pier Head.

It was described as looking like an ‘ethereal cloud’ while others likened the extraordinary concept to a diamond.

Unfortunately the project to build the stilt-bound structure fell apart in 2004, with organisers blaming financial difficulties. 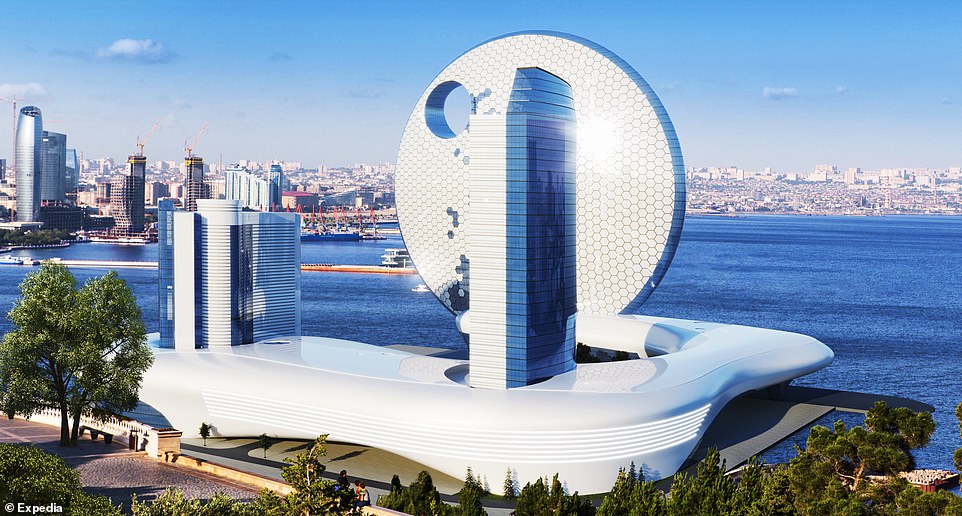 The Full Moon Hotel would have stood on the banks of the Caspian Sea in Baku. Many thought it resembled Darth Vader’s ‘Death Star’ complex

The Full Moon Hotel was planned to be a huge resort on the banks of the Caspian Sea in Baku, the capital of Azerbaijan.

The Full Moon would have been 521 feet tall and resembled Darth Vader’s ‘Death Star’ from one angle and London’s Gherkin from another.

It would be able to accommodate guests in 382 rooms over 35 floors – but the project has been put on hold. 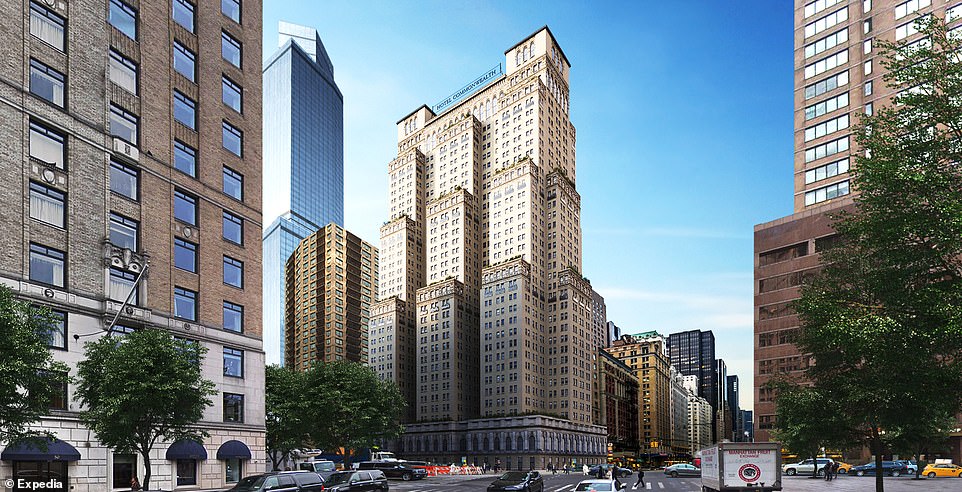 How the Hotel Commonwealth might have looked in the heart of New York City if it had been built. There were plans for 2,500 rooms on the plot, which would have taken up an entire block on Broadway

The Commonwealth was set to be the largest hotel in the world when plans for the huge building were revealed in 1918.

However, the project ended up mired in legal and financial woes and was finally called off in 1925.

The Crown Tower in Las Vegas was set to be the tallest building in both Sin City and the United States.

It was designed to be almost 2,000 feet tall and as well as a hotel would have housed a casino and an observation deck.

But the Federal Aviation Administration voiced concerns about the height of the tower and its proximity to McCarran International Airport and Nellis Air Force Base. In 2008, the plug was finally pulled on the $5billion (£3.8million) project by James Packer, the then director of Crown Resorts. 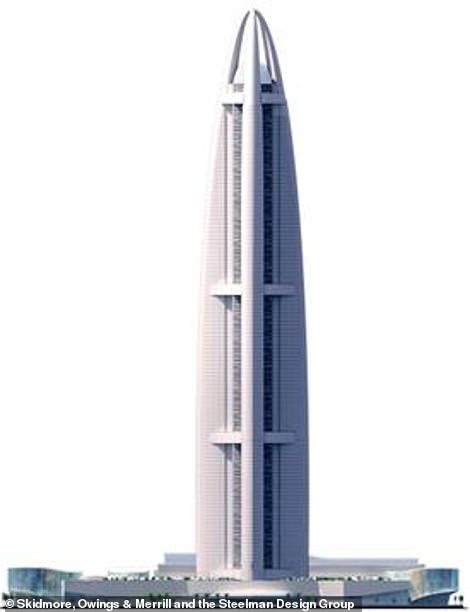 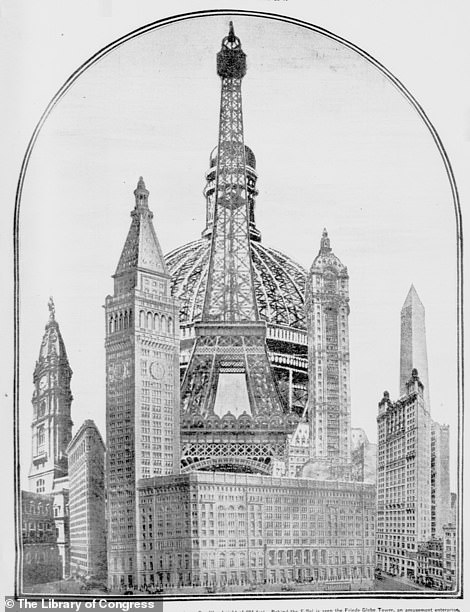 The Crown Tower, left, which had been planned for Las Vegas and would have been the tallest building in the United States. Pictured right is a sketch showing a plan for the Coney Island Globe Hotel, which was never built

Plans for the Coney Island Globe Tower were announced with great fanfare in an ad in the New York Herald newspaper in 1906.

It was billed to be the ‘largest steel structure ever built’ and would have housed a hotel as well as a a music hall, the largest ballroom and theme park in the world, an observatory and the United States Weather Observation Bureau and Wireless Telegraph Station.

Money poured into the project with investors told they would get 100 per cent returns on their investment. But after two years of zero construction, it was revealed that the project was a scam. 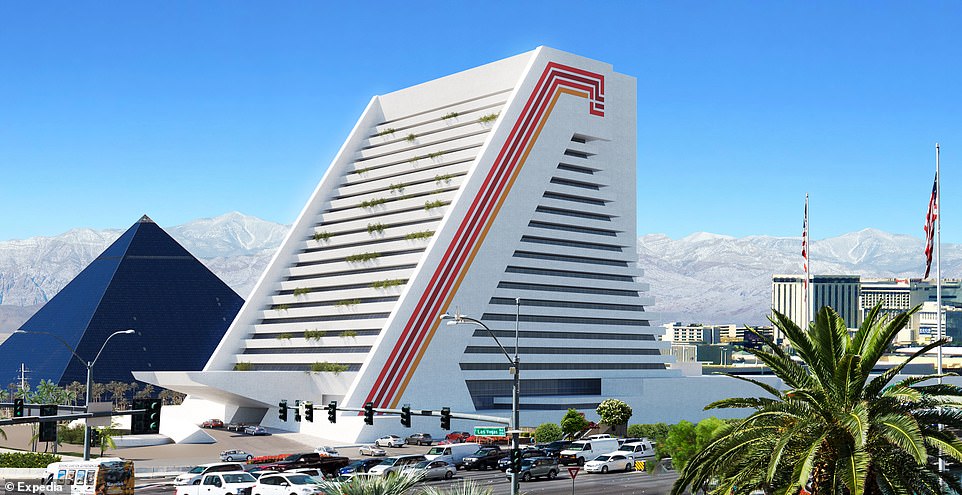 How the Xanadu Hotel might have looked on the Las Vegas strip had it gone ahead. It was planned to be a 2,000-room Aztec-style pyramid hotel with a 20-storey atrium and a flaming water feature

Even among the outrageous hotels on the Strip, the Xanadu would have been one of the most eye-catching in Las Vegas.

It was planned to be a 2,000-room Aztec-style pyramid hotel with a 20-storey atrium and a flaming water feature.

However, a dispute arose over sewer line installations and the project never went ahead. 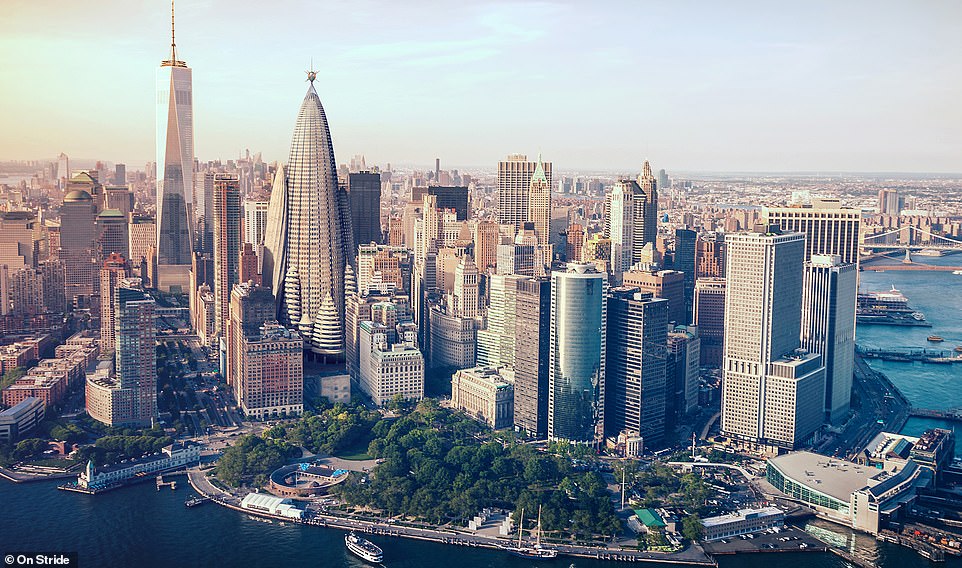 The Hotel Attraction (the rocket-shaped building to the left) had been designed by Antoni Gaudi and was planned for New York City, but the project was scrapped when the architect dropped out of the project

He is best known for designing the world-famous Sagrada Familia in Barcelona but Antoni Gaudi also designed a hotel for New York City in 1908.

Called the Hotel Attraction, it would have been the tallest building in the country at the time and would boast conical towers and a star-shaped sphere on the top.

Despite big money backing the project, Gaudi eventually backed out before the idea totally collapsed. 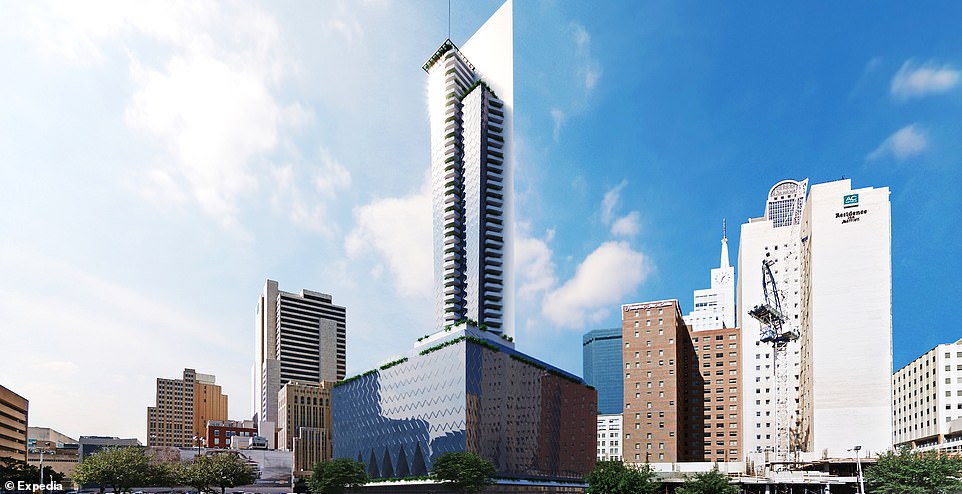 The design was a Shard-like skyscraper hotel that would ‘glisten at night’ and Wright argued it should be named the Lone Star.

But the project was too ambitious and it was scrapped before Lacy’s death aged 65 in 1947. Wright later used some of his unused ideas for the Price Tower in Bartlesville, Oklahoma. 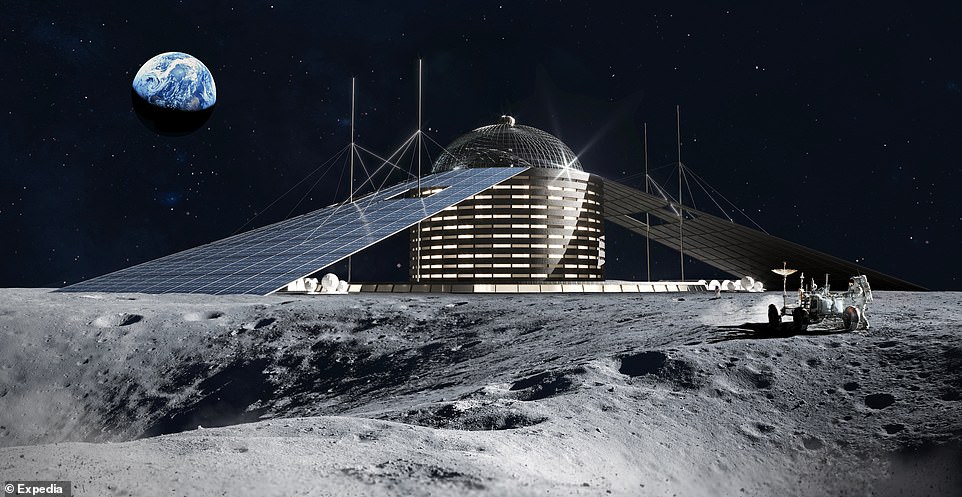 How a Hilton hotel might have looked on the surface of the moon. Barron Hilton wanted to build a fleet of ‘Orbiter Hilton’ satellite hotels

In the 1960s, inspired by the buzz of the space race, Barron Hilton, head of the Hilton Hotel Group, wanted to build a fleet of ‘Orbiter Hilton’ satellite hotels.

The luxury rooms would have been built from lunar soil and food would have included freeze-dried steaks shipped from earth and warmed in a ‘nuclear reactor kitchen’.

Although Hilton’s big ideas sparked a short-lived space-hotel race, the cost per head would have put room prices out of the reach most people and the designs were scrapped.