But anyone who buys this one – From Above: The Story of Aerial Photography by Eamonn McCabe and Gemma Padley – will find thumbing through it over and over again irresistible. Because it contains some of the most incredible aerial images in existence, many taken by photography pioneers.

Inside you’ll find the first-ever aerial picture of America, taken above Boston in 1860, the first shots by reconnaissance pigeons and startling disaster images, from the aftermath of the 1906 San Francisco earthquake to 9/11 and the tsunami that hit Japan in 2011.

This celebration of 150 years of aerial photography will shock, astound and mesmerise as it takes you on a decade by decade journey using the work of photographers who propelled image-taking to bold new heights.

It provides a unique overview of the events, challenges and changes of the past 150 years.

Here we present 20 of the compelling images found within the tome.

A photograph of Boston, called ‘As the Eagle and the Wild Goose See It’, taken from a hot-air balloon in 1860 by James Wallace Black. It’s widely believed to be the first picture of the U.S from above and, according to the book, the world’s oldest surviving aerial photograph 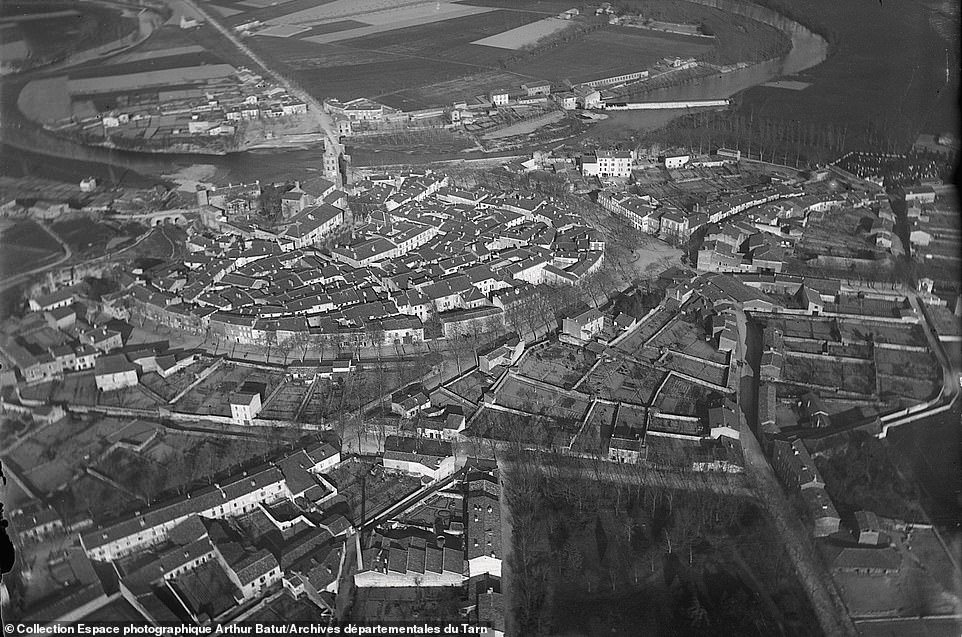 A view of Labruguire in southern France, taken by Arthur Batut in 1889. The book explains that he is believed to be the first person to take photographs using a kite in flight. A slow-burning fuse activated the shutter

A bird’s-eye view of the ruins of the San Franciscan waterfront in 1906 after an earthquake struck the city, killing 3,000 people. The image was taken by American George R Lawrence, using a device he invented called a ‘Captive Airship’, a ‘network of kites from which a camera was suspended’. According to the book, some call it the world’s first drone

Another image taken by George R Lawrence of San Francisco in 1906 after the earthquake. This image was taken around 1,900ft above the waterfront using his ‘Captive Airship’ 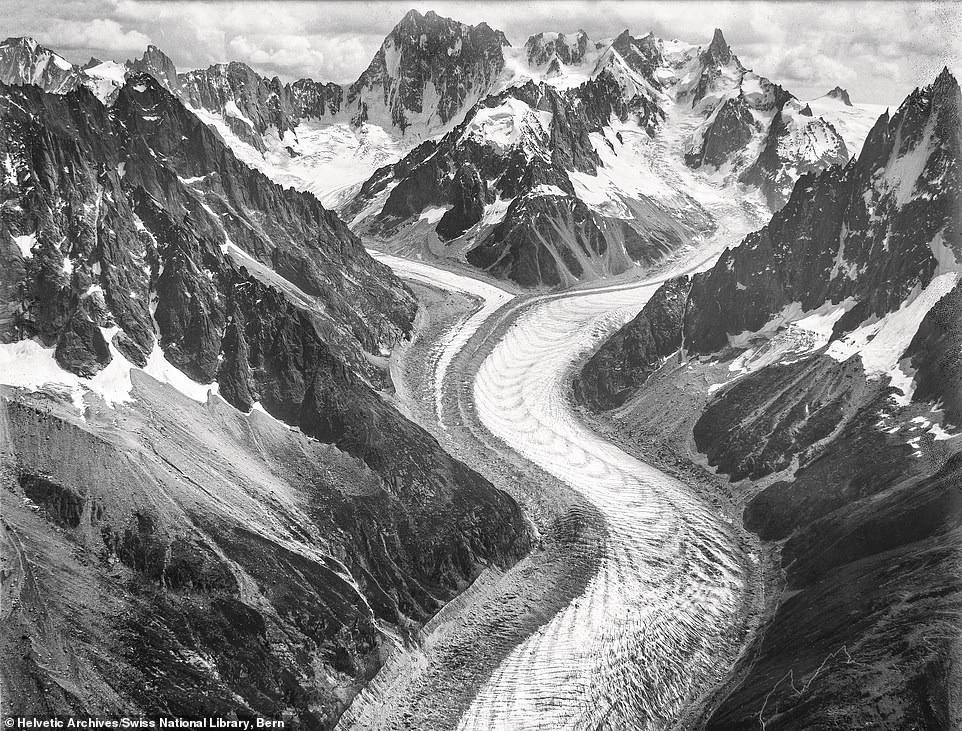 The Mer de Glace glacier on Mont Blanc, France, taken in 1909 by Swiss adventurer and ‘pioneer balloonist’ Eduard Spelterini. The book says that environmentalists today use his images to help track how fast glaciers are shrinking 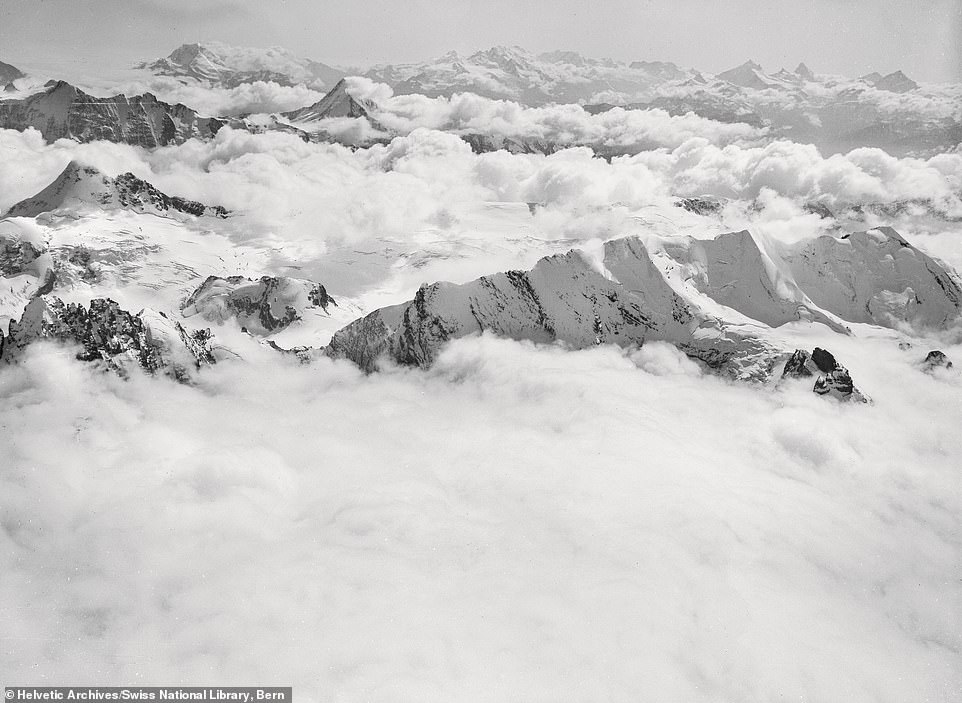 A photograph of the Blümlisalp massif in Switzerland in 1909, by Spelterini. He was the first person to successfully cross the Swiss Alps by balloon 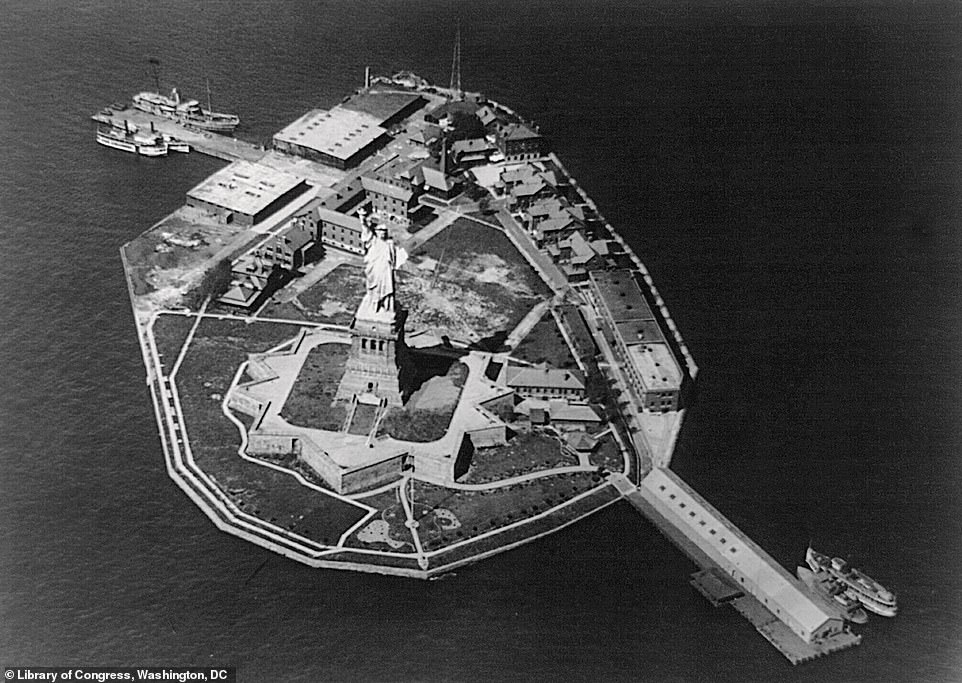 The Statue of Liberty from the air in 1922. The authors say that aerial pictures of Lady Liberty, a gift from France to America in 1885, taken around this time were rare 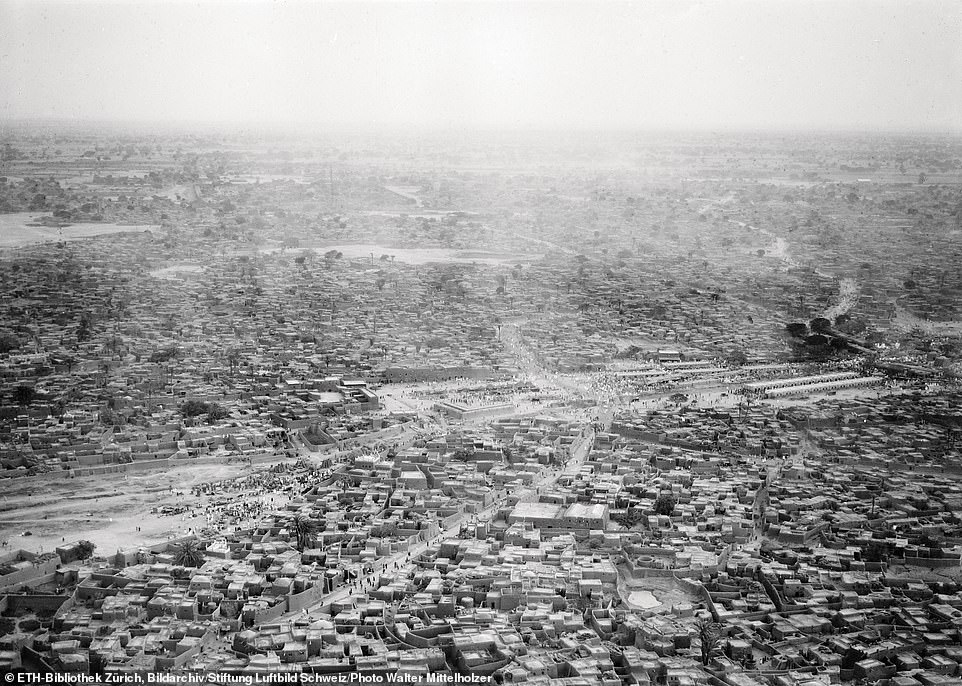 A photograph of Kano in Nigeria, taken by pioneering Swiss aviator Walter Mittelholzer in 1930. He made history in 1926 by becoming the first person to fly from the south to the north of Africa. And he banked another world first in 1929 when he flew over Mount Kilimanjaro 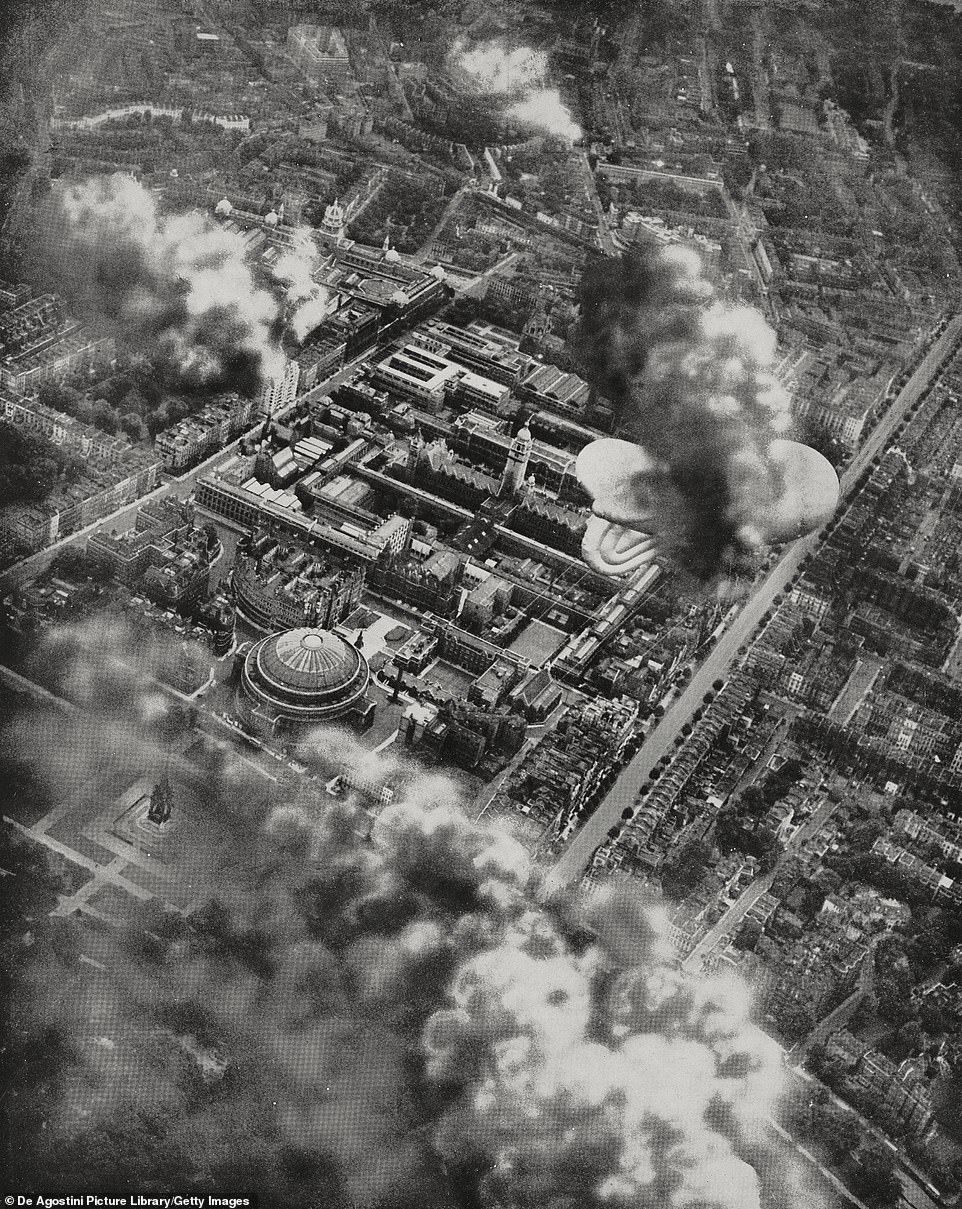 London in flames during Luftwaffe bombings on September 15, 1940. The action on that day was part of a 76-night campaign that came to be known as The Blitz 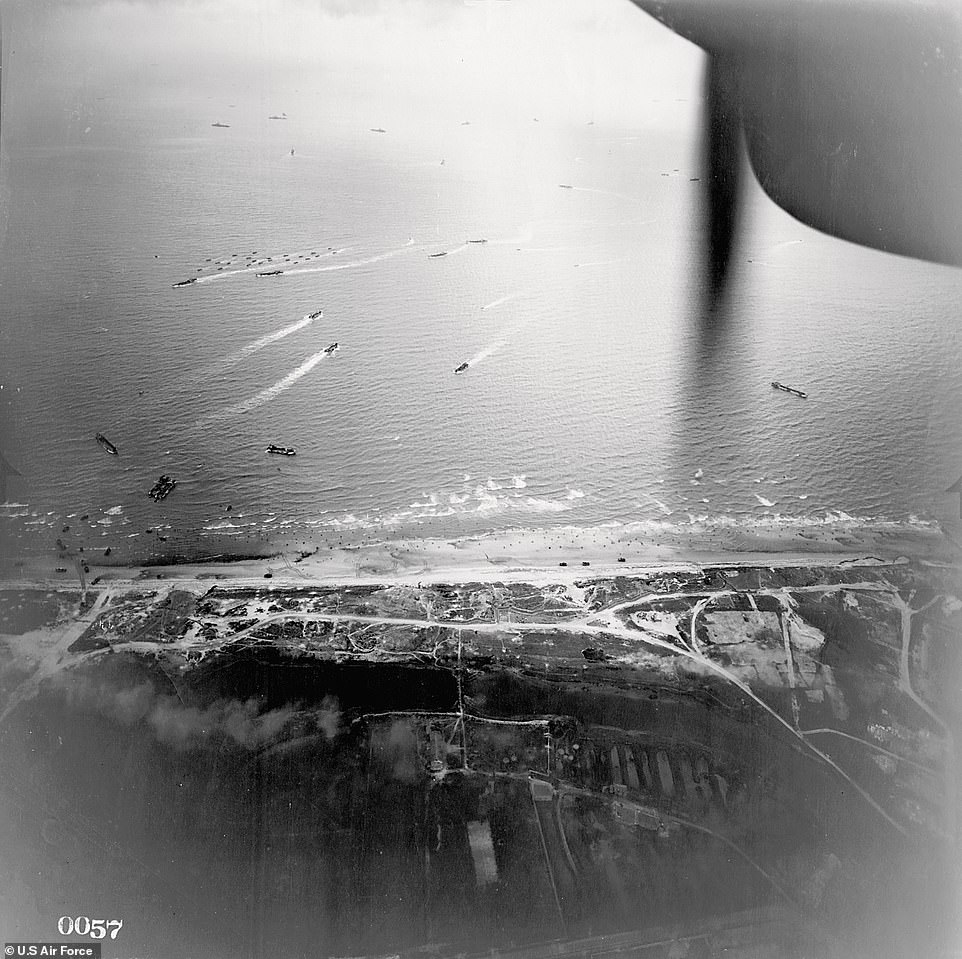 An image by an unknown photographer of the D-Day landings at Utah Beach, Normandy, France, in 1944 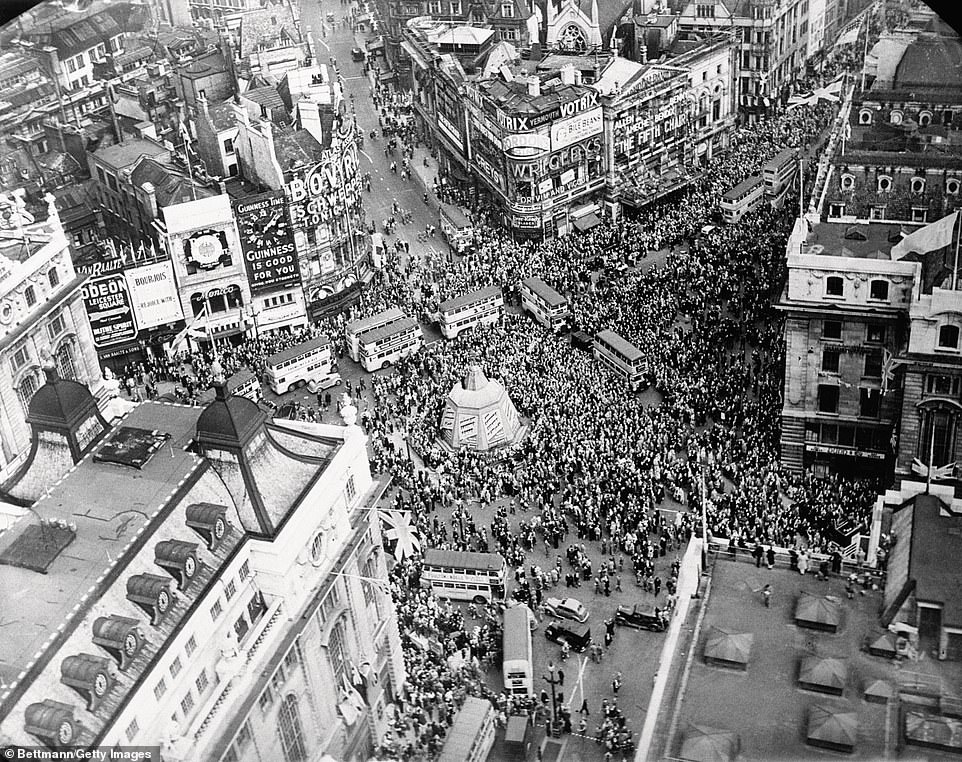 An RAF photo taken on V.E. Day, May 8, 1945, showing jubilant crowds at Piccadilly Circus in London 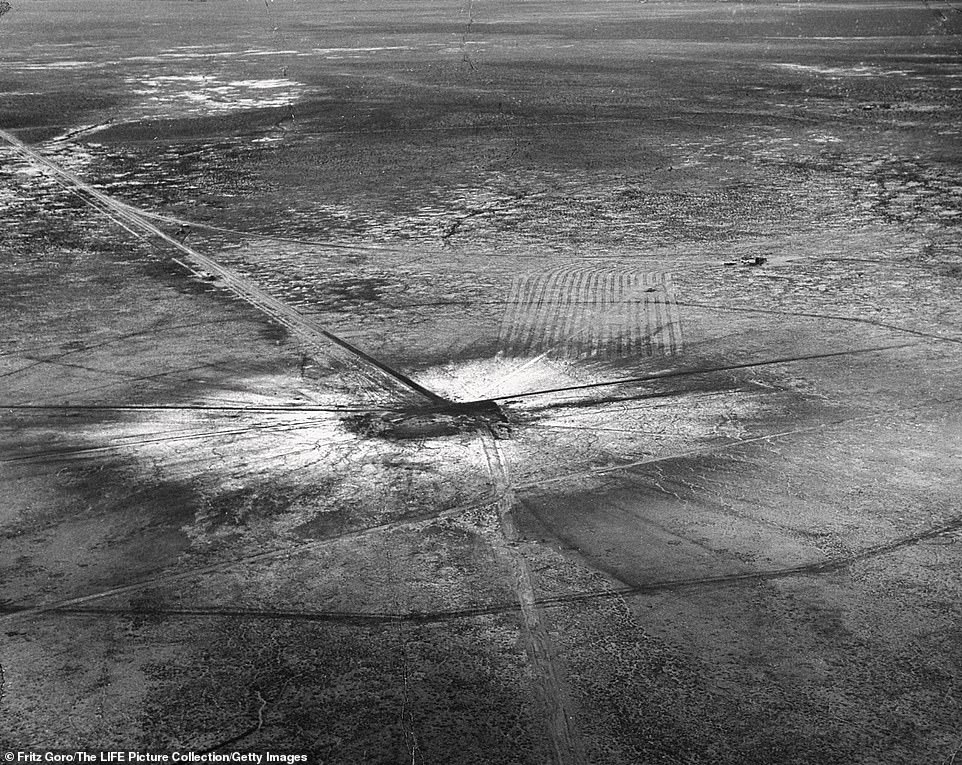 This is the aftermath of the detonation of the world’s first atomic bomb near Alamogordo in New Mexico on July 16, 1945. It shows a dark crater surrounded by a lighter splash created when the explosion’s heat melted the sand to glass 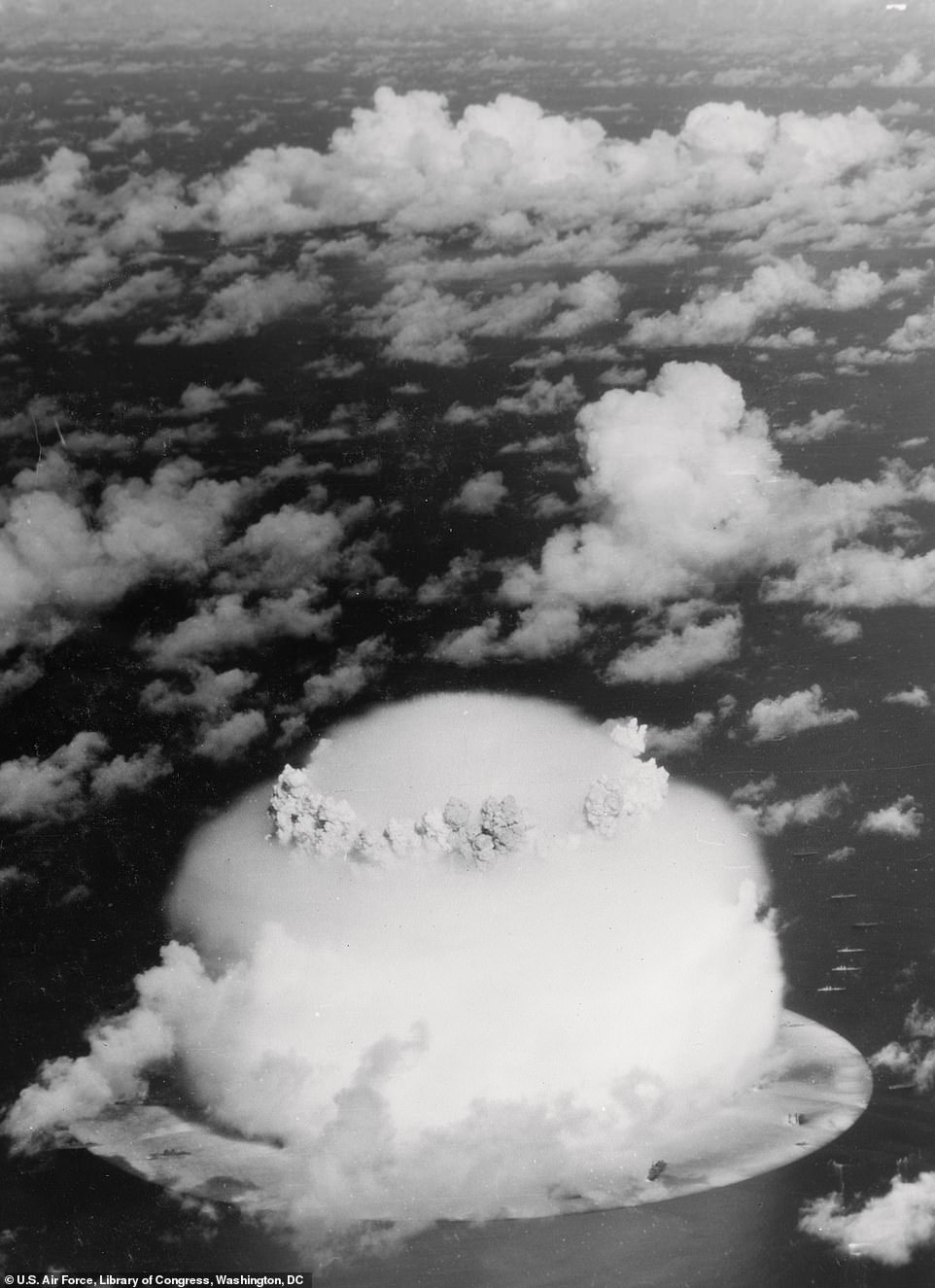 This startling image shows a U.S hydrogen-bomb test in 1946 at Bikini Atoll, Marshall Islands, in the Pacific Ocean. The event, the book says, marked the start of a series of 23 atomic and hydrogen bomb blasts carried out by the U.S government during the 1950s and 60s. It adds: ‘This aerial photograph… gives an indication of the vast and almost unimaginable scale of the blast’ 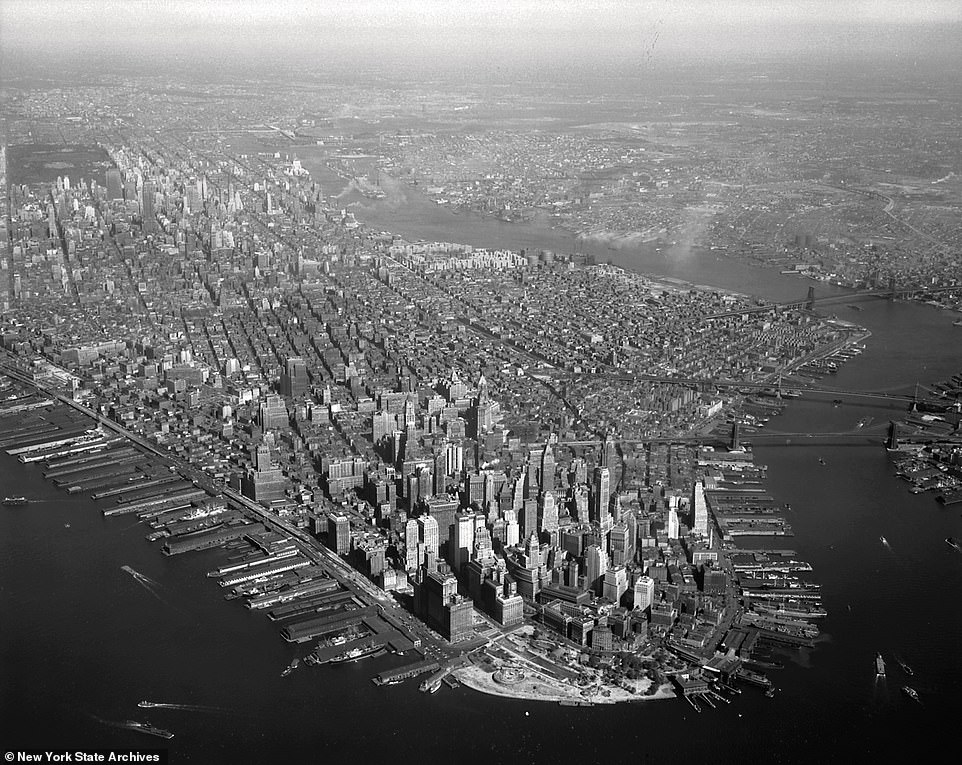 Manhattan Island in 1947. The book says that in the 1940s and 1950s aerial-survey companies produced pictures like the one above to help with map-making and land-use studies 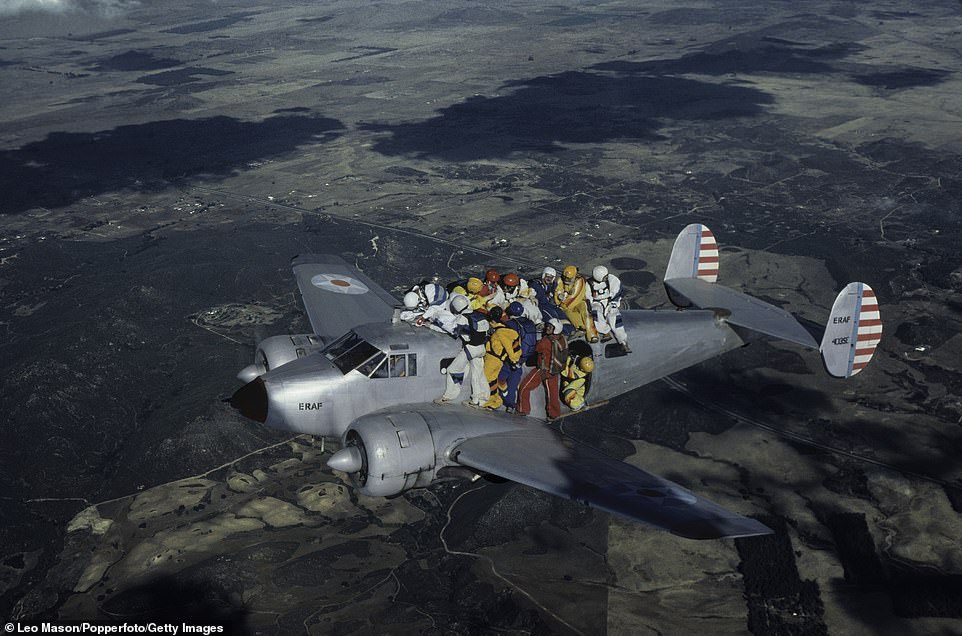 A group of skydivers holding on the exterior of an aeroplane as they prepare to skydive in formation above Lake Elsinore, California, in 1980. Handles had been welded on to the fuselage to help the daredevils hold on. The picture was taken by photographer Leo Mason, who was flying alongside in a Cessna with a door removed 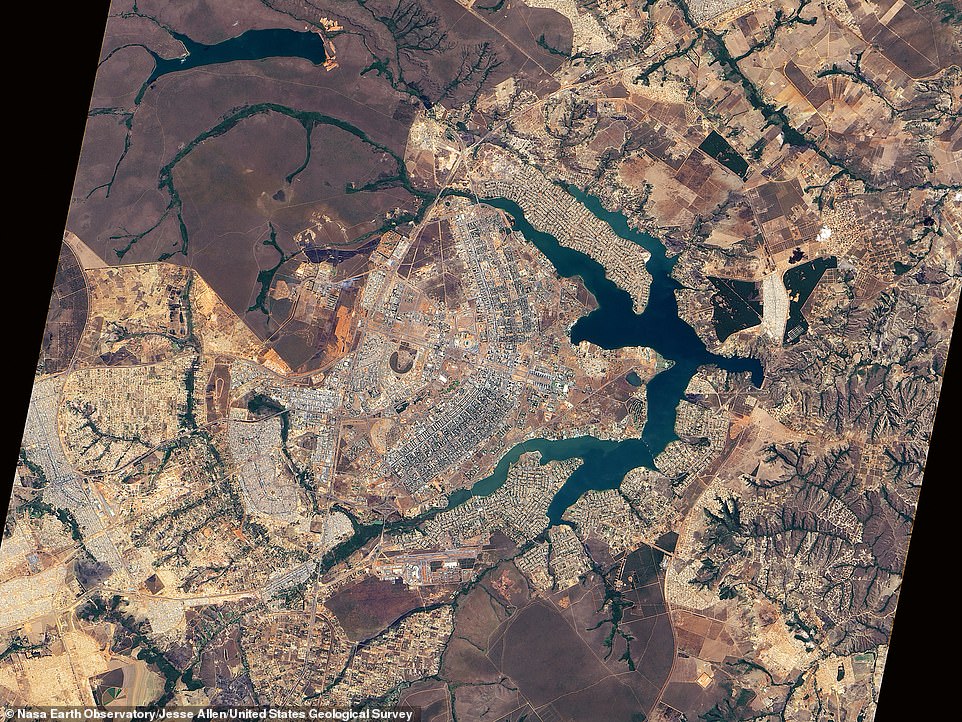 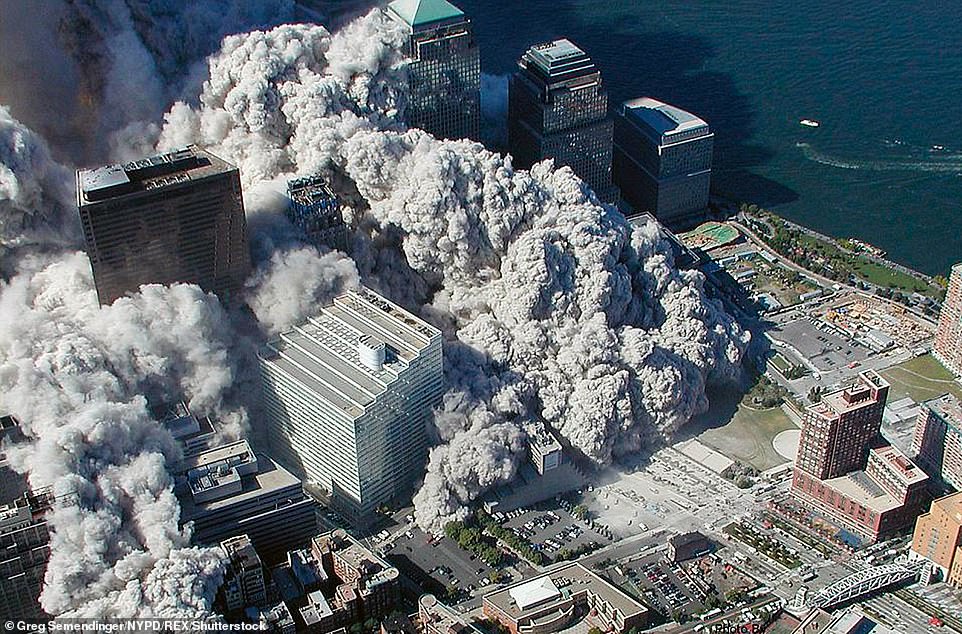 A New York Police Department photo of the 9/11 attack on New York’s Twin Towers. This image caught the aftermath of one of the towers collapsing 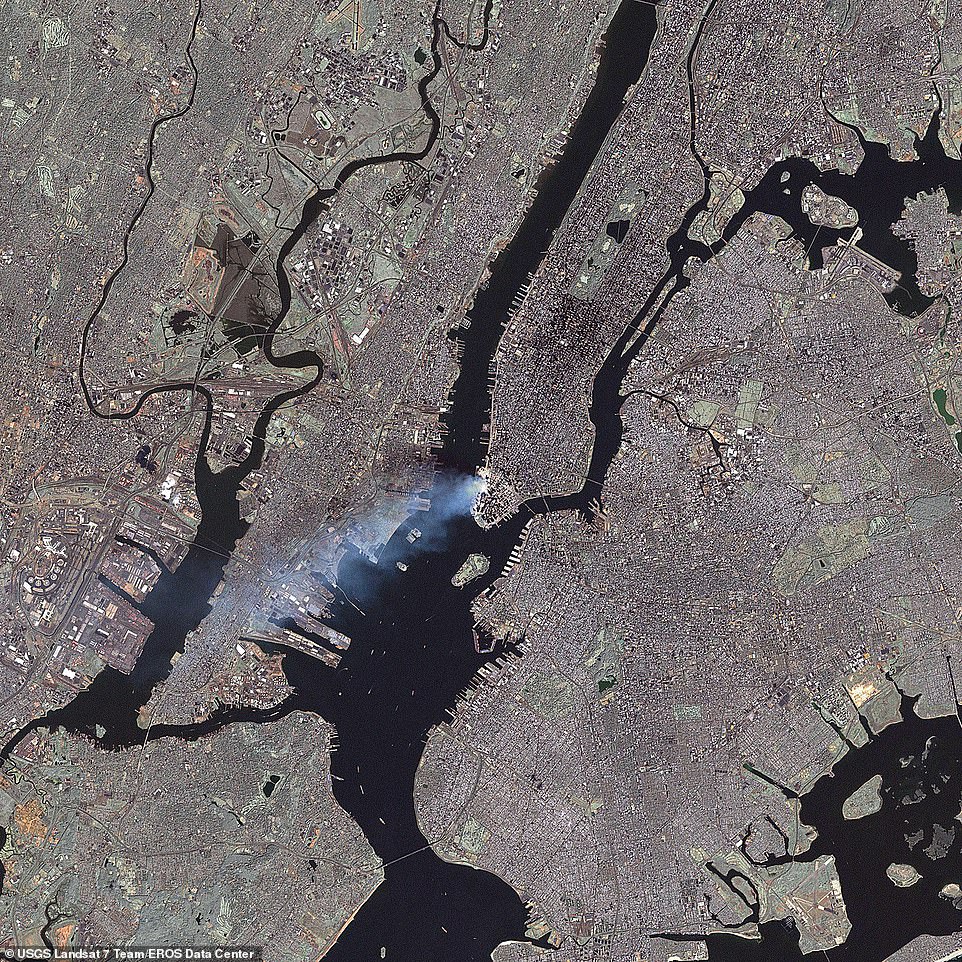 A Nasa satellite photo of the World Trade Center site on September 12, 2001. The attack, in which around 3,000 people died, was the worst-ever terrorist atrocity on U.S soil 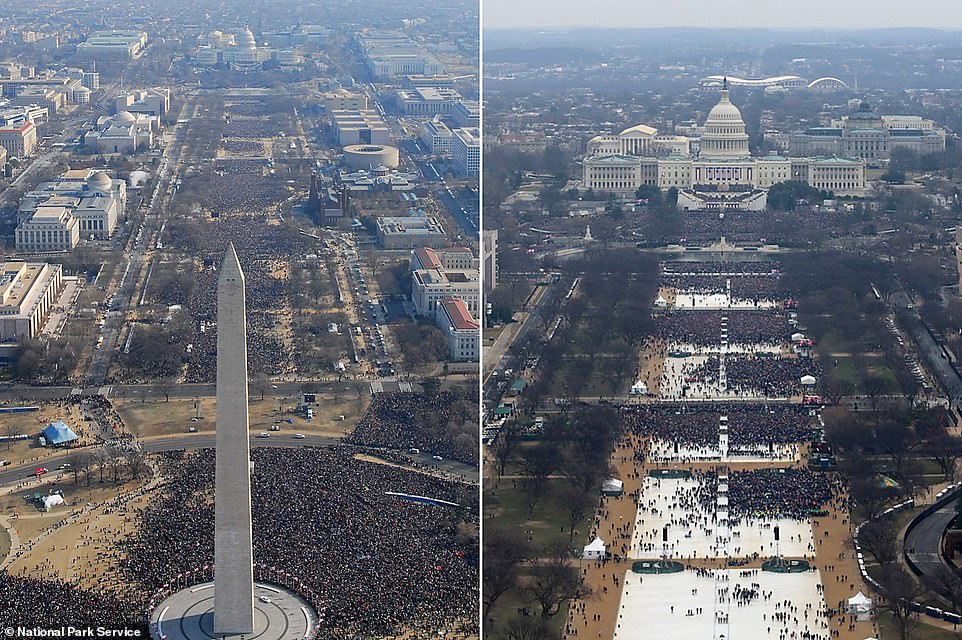 Comparative photos showing the inauguration of both Barrack Obama in 2009 (left) and Donald Trump in 2017 (right) in Washington, DC. Some estimate that twice as many people attended the former 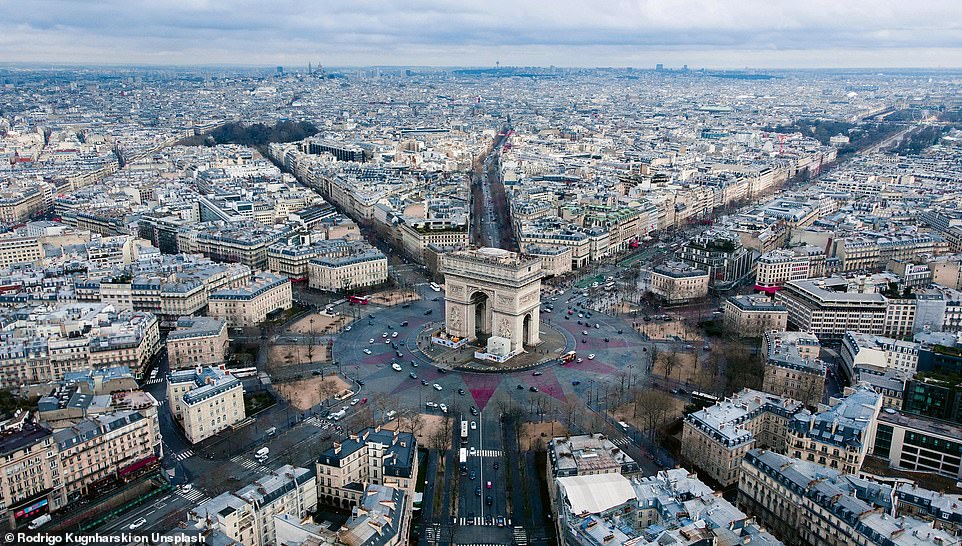 This image of the Arc de Triomphe in Paris was taken in 2018 by Rodrigo Kugnharski, who the book describes as one of a ‘new breed of creative professionals who are using drone photography to complement their day job’