Sweetly scented breezes blow through the palm trees at Julio Iglesias’s enormous villa in the Dominican Republic, and his every need is attended by a permanent staff of around 40.

He enjoys the use of other properties around the world, including an enormous pad in Miami and another huge mansion in the hills above Marbella. A private jet takes him to concerts worldwide.

Now 75 years old and worth around £250 million, he lives there in absolute luxury with second wife Miranda, 53, and their five children who range in age from 12 to 22.

Julio Iglesias also has three grown-up children — including the singer Enrique — from his first marriage. Now we know, though, that his progeny includes a ninth child — Javier Sanchez Santos (pictured) — whom a court has ruled this week is also Julio’s son

He also has three grown-up children — including the singer Enrique — from his first marriage.

Now we know, though, that his progeny includes a ninth child — Javier — whom a court has ruled this week is also Julio’s son.

‘This means that Julio must take responsibility if Javier suffers an illness or is in poverty. It also means that Javier will have a claim to inheritance.’

Indeed, the ruling could have serious financial repercussions for the star — more of which later.

According to the court’s ruling, Javier was born after his ballet dancer mother Maria Edite had a week-long fling in 1975 with Julio, a famous Casanova who has previously boasted of bedding 3,000 women. 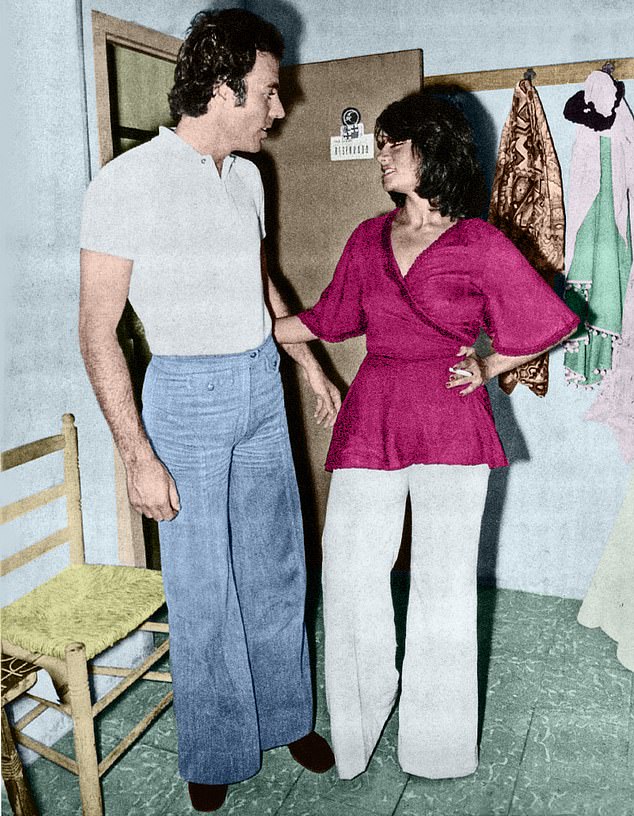 Julio Iglesias and dancer Maria Edite meet on the Costa Brava. According to the court’s ruling, Javier was born after his ballet dancer mother Maria (right) had a week-long fling in 1975 with Julio (pictured left), a famous Casanova who has previously boasted of bedding 3,000 women

Javier, now 43, who lives in a modest apartment in Valencia, dreams of making it as a singer while working in a sports nutrition shop. He has spent 30 years fighting to be recognised.

His lawyer tells me: ‘Javier is finally at peace.’

Although Julio’s legal team continue to deny paternity — the singer has 17 working days to lodge an appeal to the court ruling — his reputation as a lady-killer does not help.

‘I have been with so many beautiful girls in my life,’ Julio has said. ‘I have loved and respected women since I was 15 years old.’

He was sold as the last great Latin lover by his record company, enjoying global fame from the mid-Eighties with his romantic ballads.

He added: ‘Me, I don’t have numbers. I respect women very much. I learn from women, I adore women.’

The public Julio only has toothpaste smiles and winsome reminiscences about all the girls he’s loved before.

But the private man, according to Javier and his mother Maria, is a different story. 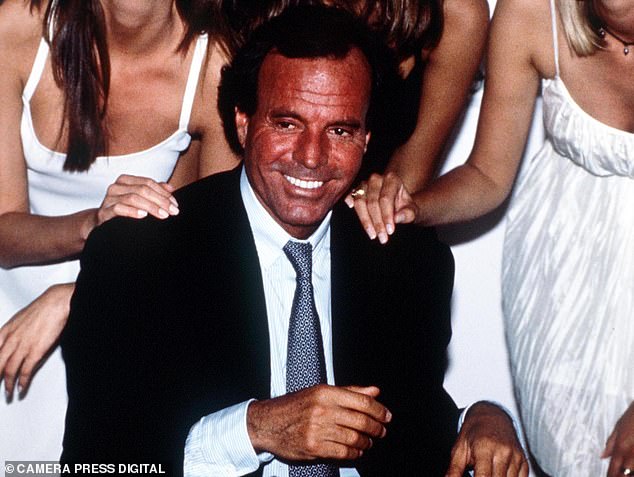 Julio’s legal team continue to deny paternity — the singer has 17 working days to lodge an appeal to the court ruling.  Pictured at Harrods, London, when he opened their new Sound & Vision Department and signed copies of his album Crazy in 1994

For three decades, she has fought to have her child acknowledged as Julio’s son and throughout it all the singer has not faced her in court.

His functionaries in America this week declined to make any comment whatsoever on the court action, or its outcome. The wall of silence continues. Speaking to the Mail this week, Maria exclaims: ‘Julio has not once met his son. He’s never once contacted either of us. What kind of a man does that? We have suffered so much and faced so many problems — we went through terrible times.’

The story begins in 1975 when Portuguese ballet dancer Maria Edite was booked to perform in a cabaret in Girona, Spain. Also on the bill was Julio Iglesias, then married to his Filipina first wife Isabel. According to her, the attraction was mutual and immediate.

She said: ‘I knew he was married but we spent all our time together, going to the beach together in the afternoons, dining together after the show and spending nights in his rented chalet.’ 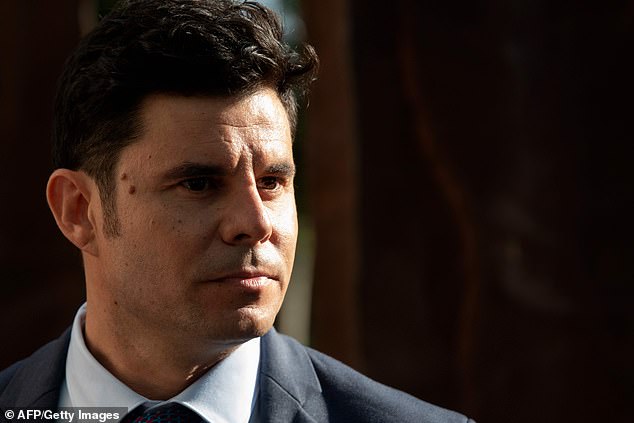 Maria says Javier (pictured) was bullied and taunted in school, with his peers not believing that his father was the internationally famous singer

Maria claims that he was her first lover. After the cabaret was over, she says he gave her a pair of jeans to remember him by.

When she realised she was pregnant, she tried to contact the singer, but never received any response.

After the birth of Javier, she kept trying to get in touch, but was met only with silence.

Julio Iglesias had son Enrique with his first wife in May 1975 — meaning that he would have had a baby and two toddlers, daughter Chabeli and Julio Jnr, at the time of the alleged affair.

It was impossible for Maria to keep on working as a ballet dancer when pregnant. After Javier was born, she ended up serving paella in a small, scruffy restaurant in Valencia.

Money was tight. They lived in an apartment in a block by the port, just along the street from a hotel. 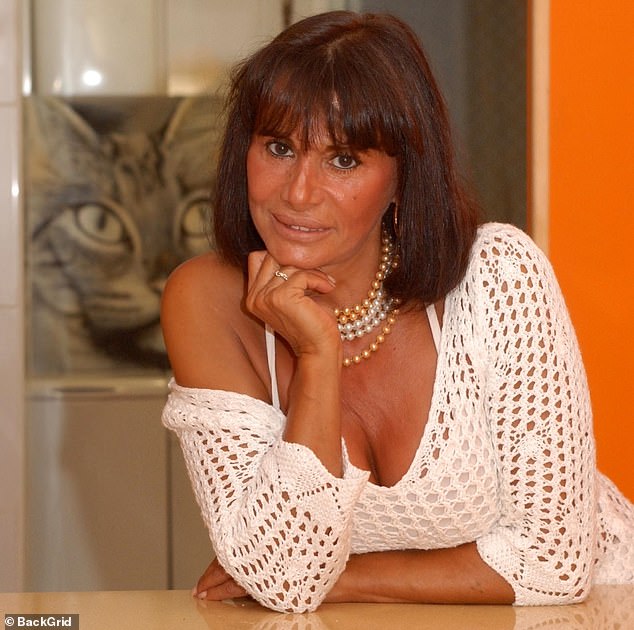 Edite Santos (pictured yesterday) and her son Javier have finally won their battle against the singer. Maria claims that he was her first lover. After the cabaret was over, she says he gave her a pair of jeans to remember him by

She said this week: ‘When Julio and I met, we were both stars. We were equal performers when we met in July 1975 in the Las Vegas de Sant Feliu de Guixols in Girona.

‘But when I became pregnant, I had to give up being a ballet dancer. Julio destroyed my dreams. It’s always the woman who has to pick up the pieces.

‘We went through terrible times. From being a ballet dancer, I had to work long hours in a restaurant making ends meet, to feed my family.

‘I was told that Julio once asked after me, and my former colleagues told him he had a son in Valencia, but he’s never once contacted either of us. What kind of man behaves like that? Not turning up to a court summons? What is that?’

She says Javier was bullied and taunted in school, with his peers not believing that his father was the internationally famous singer.

She went on to marry, and have another son who is a street artist. Now divorced, she lives in the Cabanyal district in Valencia, near the port.

Her first attempt at legal action came in 1990 when she filed a paternity suit in Valencia. Javier was 13. Julio’s lawyers denied paternity and he refused to take a test.

Undaunted, Maria took Javier to a Julio Iglesias concert, but didn’t manage to introduce them. She said: ‘When Javier was 13 we went to see Julio Iglesias live in concert. I went to present his long-lost son to him, but I couldn’t get to see him.’

The following year, the singer said in an interview — rather ungallantly: ‘I would not have time to sing if I had to take a paternity test every time a girl says I got her pregnant.’ 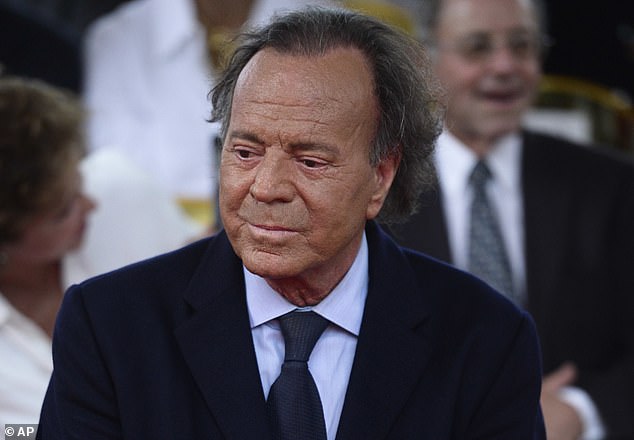 In 1992, though, the court found that Javier was Julio’s son. His lawyers had this verdict overturned on appeal. In 1995, as Julio’s son Enrique launched his hugely successful singing career, Javier decided that the time was right to launch his own pop career.

He brought out two solo albums under the name Javier Iglesias, one of which was titled ‘Soy Como Tu’, meaning ‘I am like you’ — a message to his father. Neither were successful. He then started to work as a DJ in Valencia and Ibiza.

In 2007, Maria and Javier returned to the fray, this time asking lawyer Fernando Osuna to represent them.

Osuna said: ‘He has not had the money to pay legal fees, but has been greatly helped by donations from friends, family and neighbours.’

Osuna was famous in Spain as the man who proved that legendary bullfighter El Cordobes was the father of another popular matador.

The court case gripped Spain — and was proved after a napkin used by El Cordobes was DNA tested and showed that there was a 99.9 per cent probability that he was the father.

This strategy was wheeled out again in the Julio Iglesias case, with Osuna hiring a private eye in 2017 to obtain some Iglesias DNA. 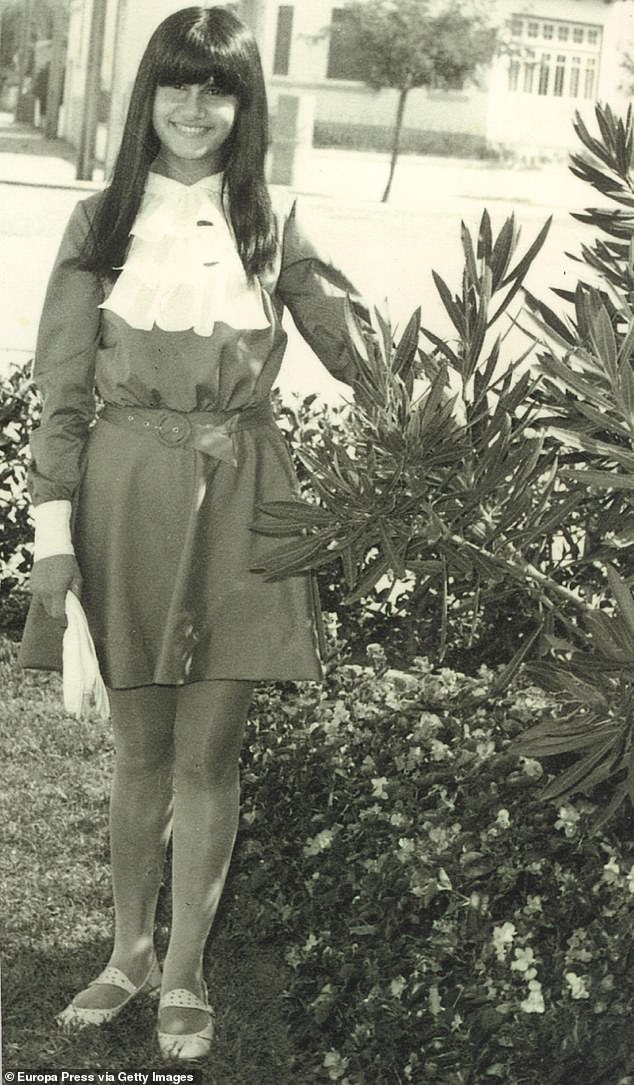 Pictured, Maria Edite Santos as a young girl in Madrid. She went on to marry, and have another son who is a street artist. Now divorced, she lives in the Cabanyal district in Valencia

This was done by acquiring a water bottle discarded by Julio’s eldest son, Julio Jr, in Miami, Florida, while he was surfing.

Osuna said: ‘In May 2017 we managed to prove through a bottle of water taken from Julio Jose that Javier was his brother, with 99 per cent certainty.Furthermore, Javier’s birth was exactly nine months after the eight-day spell in which Maria met Julio in Girona.’

With this evidence, another paternity case was brought in 2017, with the verdict finally coming this week. The judge in the case refused to admit the DNA evidence but he ruled that Maria had provided credible details of her affair with the singer, including descriptions of the chalet which he had rented.

He also cited the physical resemblance between Julio Iglesias and Javier Sanchez Santos.

Fernando Osuna said: ‘Javier is extremely happy, tranquil and finally at peace. I have worked on over 500 paternity cases, but when the father is as famous as Julio Iglesias, the satisfaction reaches inexplicable heights.

‘More than anything, what Javier feels is security. Can you imagine how he has suffered without the support of a father? Can you imagine the children asking him in the playground, “Where’s your dad?” “Why’s he never around?” It’s the peace of knowing who his father is.’

I can also reveal that the decision of the Spanish court on Wednesday paves the way for further legal action. For Maria’s lawyer says that the family now plan to sue Julio for the distress he has caused. It is also possible that Javier will try to lay claim to his inheritance, just like the eight children whom Julio acknowledges. 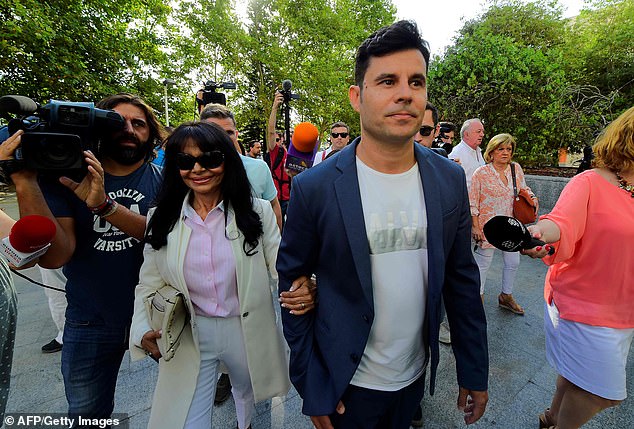 As for Maria and Javier, their 30-year battle is best described as a lesson in absolute persistence. Maria said: ‘I cannot describe the happiness we feel after fighting for so many years. For Javier, his whole world has changed.’ Pictured together on July 4

Fernando Osuna said: ‘We will now claim for moral, psychological and spiritual damages from Julio Iglesias. We will also ask for compensation, because Javier has suffered so much.’

How much will they ask for? Osuna doesn’t say, but the singer can expect the sum to run comfortably into seven figures.

This will prove a sour coda to a gilded 50-year career, which has seen Iglesias sell 300 million albums and receive a lifetime achievement Grammy and a French Legion of Honour medal.

Last month, Julio, who had been a professional footballer and only picked up a guitar to pass the time after he suffered a serious back injury in a car accident, said of his career: ‘Going out onstage to sing is an act of discipline and of absolute passion.’

Certainly, his passion has never been in doubt.

As for Maria and Javier, their 30-year battle is best described as a lesson in absolute persistence.

Maria said: ‘I cannot describe the happiness we feel after fighting for so many years. For Javier, his whole world has changed.

‘But my victory is that I am exactly the same person, because I always knew Julio was his father. My justice is that I have always been telling the truth.’