Melbourne residents could soon be hit with tougher lockdown restrictions as the number of coronavirus cases continues to climb.

Officials hinted that stage-four lockdown measures were being considered to limit the spread of the virus, and that would involve the closure of most shops, schools, workplaces and construction sites.

Retailers including Target, Bunnings and Officeworks were already bracing for the possible forced shutdown.

Kmart stores were preparing for the possible change, with the company looking to implement ‘drive and collect’ shopping, the Australian Financial Review reported.

Melbourne and Mitchell Shire were placed into stage three lockdown last week for at least six weeks after a record number of daily cases.

Melbourne residents could soon be hit with tougher restrictions as the number of coronavirus cases continues to soar (pictured: Tests are carried out at a pop-up COVID-19 testing clinic) 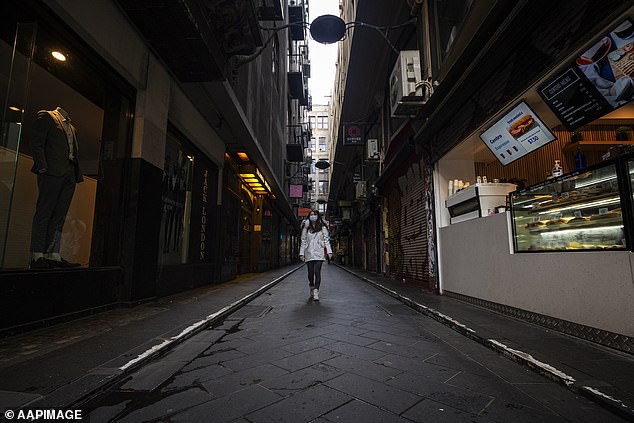 Melbourne city and Mitchell Shire were forced back into stage three lockdown last week for at least six weeks but more restrictions could soon be introduced (Pictured: Empty streets at Centre Place in Melbourne)

Despite the lockdown, the state continued to see a rise in active cases to 1,800 by Tuesday. There were 26 COVID-19 patients in intensive care, including 21 on ventilators.

High-level discussions about a possible stage-four were continuing but neither Professor Sutton nor the Premier would go into detail about how the additional restrictions could work.

In New Zealand, stage four restrictions saw all businesses close except for supermarkets, pharmacies, and other organisations it described as ‘lifeline utilities’.

Daily life had returned to normal in New Zealand, although its international borders remained closed to travellers.

Mr Andrews said Victoria may need to ‘go harder’ on restrictions if the numbers did not improve.

‘We always have to look at every single option, about what a next phase or next step may be, but again it will all be based on health advice and it will be based on the data,’ Mr Andrews said. 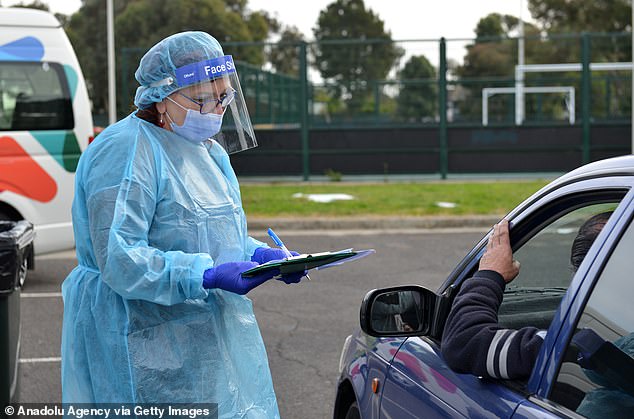 Victoria recorded 1,249 active coronavirus cases (testing in Melbourne pictured) on Saturday and it is believed that as many as 535 cases were acquired through community transmission

‘We then might also have just chains of transmission and the way the virus is presenting which means we have to go harder, if we do then we will make those announcements.’

‘We can’t rule anything out if there aren’t sufficient mechanisms to drive down transmission,’ Professor Sutton said.

‘We would do the minimum required, because we know how much of an imposition it is on businesses and people’s lives, but if it’s required to reduce transmission, then it has to be in play.’

Residents are only permitted to leave home for work, study, exercise, medical care or to buy essential supplies under stage three restrictions.

Cafes, restaurants, pubs, clubs and bars have also been restricted to takeaway only.

He said just having people stay home wouldn’t be enough to slow the spread of coronavirus.

‘We need to work with the masks, the workplaces, make sure people are doing the right things in terms of excluding themselves and getting tested as part of that,’ he said.

On Tuesday, Victoria announced 270 new cases while a man and a woman in their 80s died in hospital, taking the state death toll to 26.

‘It’s not as high as our biggest single day, but we haven’t turned the corner yet,’ Chief Prof Sutton told reporters earlier on Tuesday. 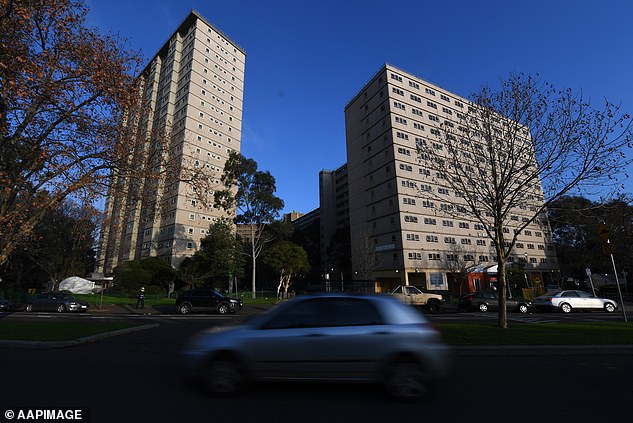 On July 7, the government forced nine subsidised housing blocks in Flemington and North Melbourne into hard lockdown, with residents unable to leave the buildings (pictured: A tower in North Melbourne) 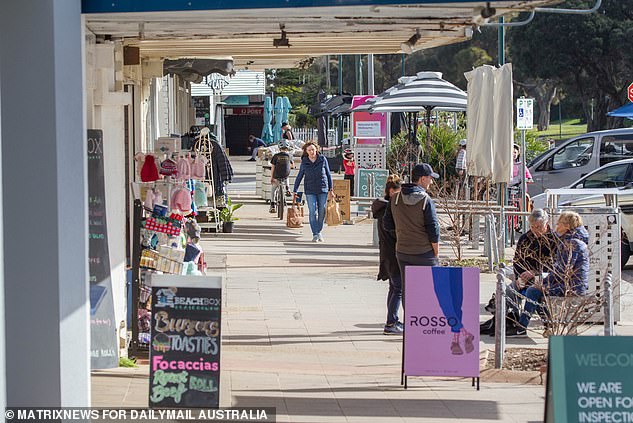 High-level discussions into the possibility of shops being forced to close were under way on Tuesday afternoon (pictured: The main street in Blairgowrie)

‘I hope to see that this week, but there are no guarantees.’

Some private security guards at the hotels had reportedly breached quarantine protocols, thus spreading the virus into the community.

On July 7, the government forced nine subsidised housing blocks in Flemington and North Melbourne into hard lockdown, with residents unable to leave the buildings.

Eight of those nine ‘hot zone’ towers have had their lockdowns eased now that residents have been tested, and were back at the same stage three restrictions as the rest of Melbourne.

Residents of the tower at 33 Alfred Street remained in their apartments, with no release date announced.

Latest snapshot of the coronavirus impact