The new rules of good manners

As a nation, we Brits have long prided ourselves on our manners. We are, supposedly, polite sorts who hold doors open and say please and thank you. But manners evolve, like language, and if you use the wrong spoon for the soup these days it shouldn’t cause anyone heart palpitations, as it might have done 100 years ago.

Instead, we have a new range of quandaries to consider. What should we do about our obsessive phone use? How do we greet someone we’ve never met but follow on social media? Do you have to invite that vegan over for dinner? And should we really still send thank-you letters? (Yes, sorry.)

Patricia Routledge as Hyacinth Bucket in Keeping Up Appearances. As a nation, we Brits have long prided ourselves on our manners. But manners evolve…

So, to avoid awkward social dilemmas, here’s my guide to getting it right in 2019…

1 Do not correct people or make a face if they say ‘toilet’ (rather than the allegedly more acceptable ‘loo’ or ‘lavatory’). I cannot bear the snobbery around this word. The same applies to ‘couch’, ‘settee’, ‘lounge’ and so on. It is 2019 – people should be able to use whatever words they like without judgment. One of my friends taught her children to say ‘toilet’ purely to wind up her snobby mother-in-law and I love her for it.

2 Never email people at the weekend unless it’s an actual emergency. This applies mostly to work emails since we’ve all become so caught up with being in touch and fear being fired if we don’t reply to a colleague/boss within two and a half seconds, even if it’s 11pm on a Sunday. But how urgent is this, really? It’s not. Leave it until Monday morning.

3 If in doubt when meeting someone, shake hands. Greetings can be hideously awkward these days when we tend to be less formal with people and sprinkle our emails with kisses. How do we greet that colleague or person we follow on social media but have never actually met – two air kisses? One kiss and a weird half-hug? If you’re worried, stick out your hand with confidence. Nobody can misconstrue that.

4 Don’t be a TV snob. A friend went on a date and was struggling with conversation, so she asked her prospective beau what he was watching. ‘I don’t have a TV – I read books,’ came the reply, as if he deserved a medal and she was a halfwit. Snobbery of all forms is unattractive, but TV snobbery is particularly misplaced nowadays given how excellent television has become and how many choices we have. Being pointedly rude about Love Island or Bodyguard makes you sound like an out-of-touch geriatric.

5 If you’re sitting next to someone at a dinner or standing next to them at a drinks party, ask questions. Be interested in them. Do not assume that you’re so intriguing the other person only needs to hear about you. A friend has a little trick she often plays if sitting next to a self-obsessed man who won’t stop banging on about himself. ‘And when did you first realise you were so fascinating?’ she asks, and they apparently always answer genuinely. Don’t be the butt of this joke.

6 You still need to send thank-you cards or letters but it’s totally acceptable to do it online. I often use the website Moonpig to send a postcard. I’ll go online, upload a photo from my phone of the lunch/dinner in question for the front of it, type out a thank-you note for the back, then send it to arrive the next day. Quick, easy, job done.

7 Never leave your phone on the table when you’re in a restaurant or at someone else’s house. So many do it, eyes flicking from their friends’ faces to their phone to check for a little blinking light. It’s incredibly irritating. Put it away. And don’t do that thing of reaching for your phone halfway through a meeting/lunch/dinner, mumbling vaguely that you’ve ‘just got to check something’ and then scan your emails and all forms of social media because you’re addicted to the dopamine hit. Just leave it for a few minutes/hours. Nobody will die.

8 If someone has a poppy seed stuck in their teeth or a drop of gravy on their chin at a party (this is often me), tell them. There’s nothing worse than going to the bathroom only to realise that, while chatting about international affairs, trying to sound intelligent, there was a piece of dill wobbling on my lower lip. Please tell me. We’d all much rather know.

9 Look people in the eye. It may seem obvious, but it’s one that my stepmother drummed into us as teenagers. ‘Slidey eye,’ she used to say severely of our friends who failed to do this. It looks shifty if you don’t. 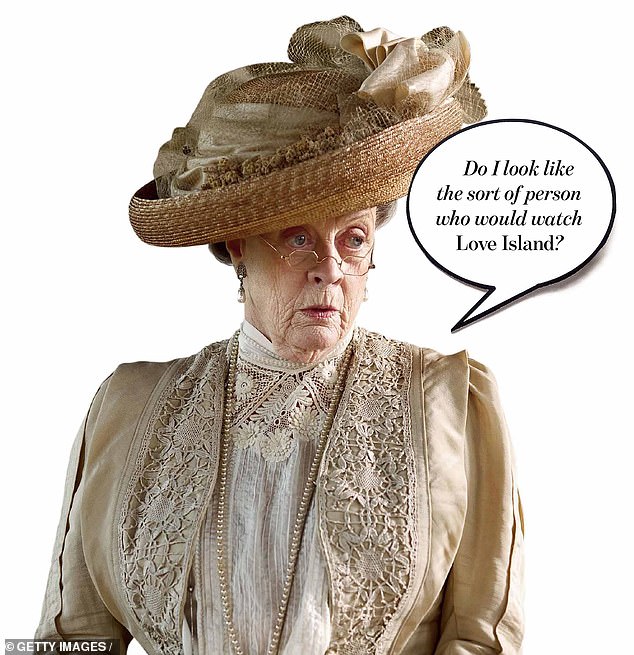 Snobbery of all forms is unattractive, but TV snobbery is particularly misplaced nowadays given how excellent television has become and how many choices we have

10 Try to wean yourself off the habit of saying, ‘We must have drinks soon,’ to someone you’d rather never see again. Trying to set up a date for something that will never actually happen is a waste of time for everyone involved.

11 If you are vegan/haven’t eaten bread since 1997/only eat organic foods that have been locally foraged even though you live in London, and you are asked to dinner at someone’s house, let the host know this when you’re invited. A discreet text or email is fine. ‘I’m so sorry to be difficult but I’m vegan, so do let me know if I can bring something,’ strikes the right tone and gives the host time to prepare. Do not leave it until you’re all sitting around the table and then loudly proclaim, ‘Oh no, I’m so sorry, I can’t possibly eat this chop because I don’t know the name of the lamb it came from.’

12 If you really have to cancel something at the last minute, it’s best to call the other person. Don’t send a WhatsApp with a feeble explanation and a string of sad-face emojis. When you phone, try to sound suitably guilty and offer another date to make up for it.

13 What kind of birthday person are you – the sort who treats it as a week-long festival or the kind who hates the weird pressure to have ‘the best day ever’ and so ignores the whole thing? I’m the latter, but not telling colleagues or friends that it’s your birthday and then casually letting it slip too late in the day when you’re feeling needy can make them feel awkward. Instead, why not simply say, ‘It’s my birthday’, smiling, whenever someone asks you how you are that day, and then graciously accept their congratulations. That way nobody feels guilty.

14 Don’t always make friends do the running. People with babies and small children should, every now and then, make the effort to travel to see their single mate who usually comes to them. If you are the single friend in this scenario, don’t make passive-aggressive remarks about it; remember, the height of good manners is not making a fuss or making someone else feel uncomfortable. Console yourself with the fact that you weren’t woken up at 5am this morning.

15 Whatever you do, don’t mention Brexit in polite company – or any company at all.

And some very bad manners…

Being nice to others has always been good etiquette, but it seems that many people still haven’t got the memo. After we published our best (and worst) backhanded compliments last month, we asked you for your own examples. You didn’t disappoint, sending us the catty comments that made you wince and laugh in equal measure. Here are our favourites… 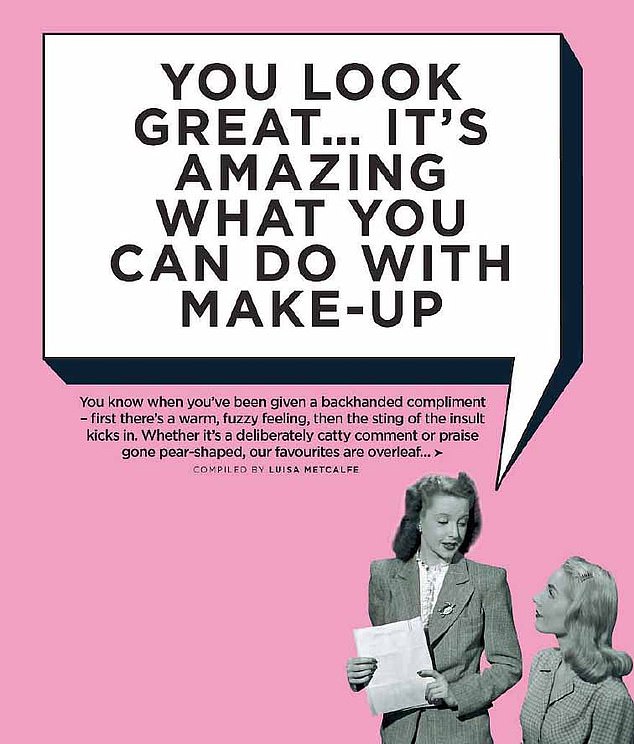 My new mother-in-law, who idolised my husband, was looking at our wedding photos and said, ‘Doesn’t that white dress make his suit stand out nicely?’

Many years ago, arriving at the office with my hair newly styled into a curly perm, a friend commented, ‘I love your hair. I would have mine done in that style if it ever came back into fashion.’

Early on in our relationship my husband told me he wouldn’t describe me as stunning but I was a good all-rounder.

A neighbour on first seeing my newly arrived third baby: ‘Oh, she’s lovely. A really beautiful baby – what a lucky girl to look so like her father.’

A lovely friend, who is still a lovely friend, told me a couple of years ago: ‘Oh, it’s OK for you! Being slim means you can get away with wearing cheap clothes.’

I’m a life model for art classes; I’m Rubenesque and not slim or young. Several years ago, while working at an adult education evening class, a very drunk intruder burst in. I held my pose while the tutor tried to get him out of the door. Just as we thought he’d gone, the door flew open again and he said, ‘You’re not bad looking, for a fat bird,’ before slamming the door shut. I burst out laughing. I am still curvy and still modelling.

A colleague once said to me: ‘How early in the morning do you have to get up to look like that?’

A woman at a business event once said about me: ‘I have always thought it is better to be interesting looking than attractive.’

‘That coat is lovely. If you were tall and slim it would suit you.’

After our wedding ceremony, friends and relatives gathered round to compliment us on the day when an aunt came up to me and said, ‘You do look lovely – your dress suits you well and it must be so hard to get one in your size.’

I was once told by a close friend: ‘Your nose fits your face.’

My mum to me: ‘I know you’re kind underneath that waspish exterior.’

When I mentioned to a friend that someone had told me I looked young for my age, she said, ‘Yes, you do, except for your hands and feet.’

I was walking into town with my granddaughters. The younger one was being rather unkind to me, as children of this age can be, which I chose to ignore. The elder one rose to my defence and said, ‘Don’t be unkind to Grandma as we don’t know how long we will have her for.’

Years ago, I was singing away in work when a visiting engineer said, ‘You sing like a bird.’ I felt really proud, and then he said, ‘Like a crow.’

I met an old friend and his mother, who I hadn’t seen since infants’ school. He told me later that his mum had said, ‘She’s quite attractive now, considering she was such an ugly child.’

A colleague once told me, ‘You’ve got no real talents… but lots of skills.’

A friend’s daughter – when she was about 12 – said to her godmother, ‘I’d really like boobs like yours when I’m older. Only bigger!’

My favourite was from a drunken man on the tube who said to me, ‘You have such beautiful blue eyes, you look like… Mickey Rourke.’

An American friend once told me I was ‘an eight [out of 10], which is like a British nine’ in a conversation about attractiveness in the US versus UK.

When I had platinum hair I got: ‘I love your wig!’

I have a friend who, when I showed her a new dress I’d bought, said, ‘You’re so lucky, you can wear dresses like that because you’re so flat-chested.’

I took my new baby, who was rather red-faced, out in his pram and called into a local toy shop. The assistant looked at my darling son, paused, and said, ‘My, what a lovely pram!’