I’ve never needed the services of the paramedics before – but right now I fear I might.

I’m about to try out one of the £340,000 jet suits that the ambulance service are training to use to allow them to flit across treacherous terrain in minutes.

Inventor Richard Browning, 41, created the astonishing means of travel – bringing something that we’d normally see in a Hollywood sci-fi movie to reality.

Looking distinctly like Marvel’s Iron Man, Browning put the 1,050 brake horsepower jet pack through its paces in a test flight with the Great North Air Ambulance Service in the Lake District last month.

The carbon-fibre device, which can fit in just two suitcases, would radically reduce rescue times from 25 minutes on foot to 90 seconds.

Now, Browning has given me the unique opportunity of putting his ground-breaking suit through its paces at his training and experience centre at Goodwood, in West Sussex.

Lucy Jones tests the £340,000 jet suit that the ambulance service are training to use to allow them to flit across treacherous terrain in minutes 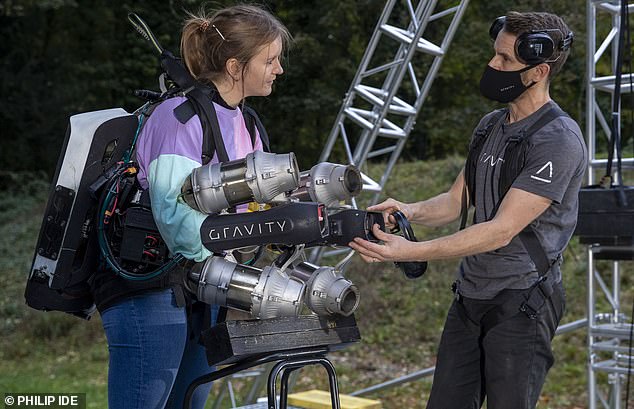 Inventor Richard Browning, 41, created the astonishing means of travel – bringing something that we’d normally see in a Hollywood sci-fi movie to reality

The former Royal Marine reservist and BP oil trader founded Gravity Industries in March 2017 to pioneer the ‘next frontier in human flight’.

His carbon-fibre device looks a bit like a rucksack with gas canisters stuck to the side – which in a way it is – and weighs 35kg including fuel.

‘It has the potential to propel whoever is wearing it through the air at up to 200mph, but I set the world record at 85mph last year,’ Browning tells me as he straps me into it.

Despite this, I won’t be going any faster than 40mph or hovering higher than about four or five feet above grass level for my training session ‘for safety reasons’.

I’ll also be tethered to a metal frame that Browning has equipped to give support as I attempt to handle the thrust of the turbines – and to ensure I don’t float off into mid-air.

As Browning fires up the suit – with the jets inner spindles rotating 110,000 times a minute – the first thing that strikes me is the noise.

The thunderous roar is the same kind of decibel level as a large aeroplane on the runway at Heathrow – and it is more than enough to rumble through the ear defenders clamped firmly on the heads of everyone watching. 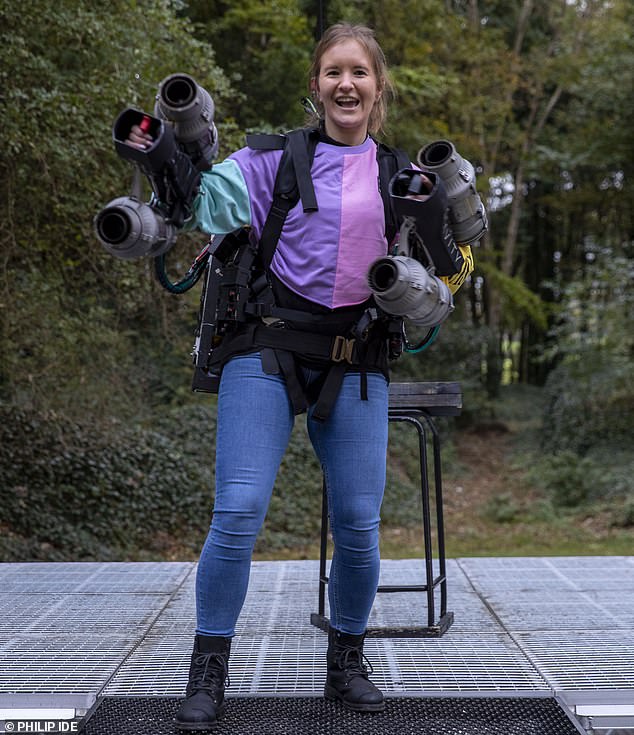 The violent throbbing emanates from two micro jet engines on both of my arms and one on my back, which are powered by Jet A1 or diesel fuel, allowing for movement to be controlled.

‘The way the micro turbines blow so much air downwards allows you to lift off the ground,’ Browning, tells me.

I’m told I need to keep arms straight as I point the cylinder-like arm engines down, with my chest pointing forwards.

I do exactly that but – at first – it proves to be a lot more difficult than Browning makes it look.

After a few goes, I finally find my feet lifting up, with my body floating in the air.

The feeling of complete weightlessness is exhilarating.

While I felt like a superhero during that moment, when I look back at the footage I look far from Browning who appears bird-like when he demonstrates the suit. 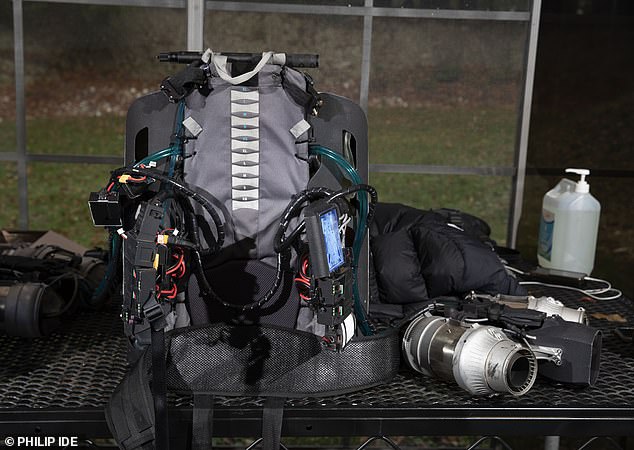 ‘It has the potential to propel whoever is wearing it through the air at up to 200mph, but I set the world record at 85mph last year,’ says Browning

It’s not just Browning’s jet pack which is taking off though – his company is too, with its influence spanning the globe.

He has picked up investment from Tim Draper, one of Silicon Valley’s most prominent venture capitalists, and his son Adam.

He also has an inbox full of requests from some of the world’s wealthiest individuals who are looking purchase their own jet suits.

Not one to rest on his jet engine, Browning has also been developing a means by which the jet pack could become an attraction at theme parks.

‘We are building an electric tether system to train people which you could have at theme parks – we’re working with some people on that,’ he says.

‘It’ll be a cheaper experience that more people can enjoy.’

‘I think people enjoy getting a bit of a distraction at looking at something that’s so exciting and engaging and a bit super-heroey and a bit comic book.

‘There’s also a bit of a subliminal metaphor of going above and beyond and setting free and escaping.

‘When it comes to lockdown and politics it’s quite a nice refreshing change.’

So could we be approaching an age when people can pop on a flying suit and whiz themselves to the shops at the push of a button?

Browning says: ‘The dream of flight is owned by both men and women – the world is a hard place to predict at the moment but we will see where it goes.