The nine best hotels that are packed with stunning masterpieces

Gaze at a Matisse before breakfast and a Chagall before bed? It’s now possible, thanks to serious art collections on show in hotels around the world.

Here we round up nine of the very finest…

Modern marvel: Paintings adorning the walls of the Merchant House Hotel in Bahrain. The showstoppers are works by Chagall, Gauguin, Matisse and Toulouse-Lautrec

Check in: The latest gem of a hotel in Bahrain’s capital is housed in a remodelled historic building close to what was once the main gate of the old city. Expect high style all the way, from the lobby, reception and cafe right up to the rooftop, with its pool, sun terraces and bar/restaurant Indigo.

The collection: Luxurious guest suites are adorned with distinctive graphic screens and walls by Bahraini/American architect and artist Nasser Alzayani. These complement the wonderful original artworks to be found throughout the hotel, some by local artists. However, the showstoppers are works by Chagall, Gauguin, Matisse and Toulouse-Lautrec, some on loan from the private collection of the hotel’s investors.

Price tag: Bed and breakfast for two from BHD 90 (about £185) per night (campbellgrayhotels.com). 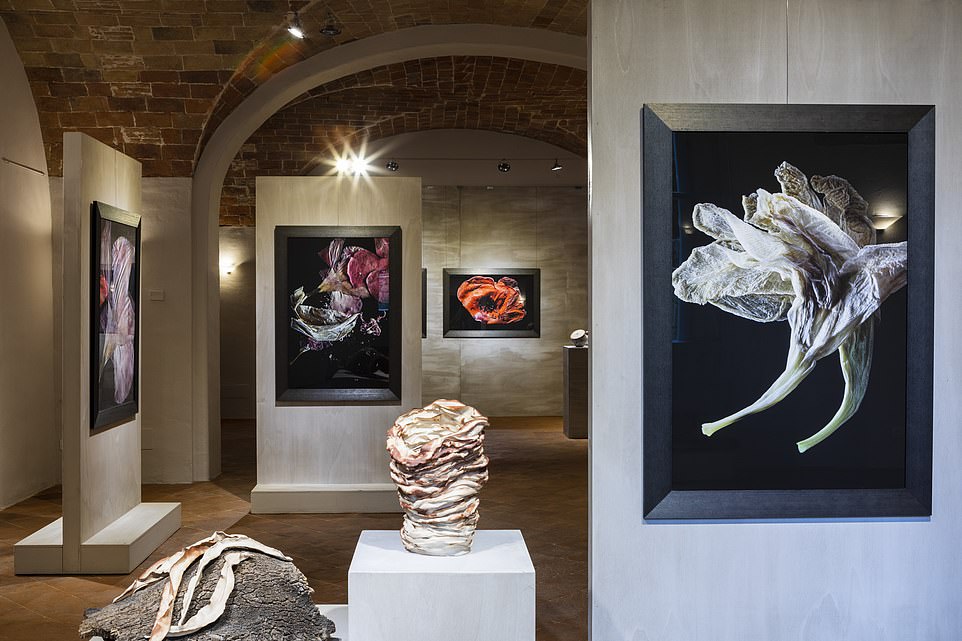 Check in: At the heart of an exquisite 750-acre estate in Tuscany and a short drive from Florence and Pisa, the hotel, owned by Sir Michael Moritz (sponsor of the Booker Prize), has a long-established collaborative relationship with the Royal Drawing School in London. An alumnus is always on hand to provide painting classes for guests, who can dabble with their brushes in between meals in the excellent restaurants specialising in organic, locally sourced produce.

The collection: Guests can view contemporary art exhibitions at the Pignano Art Gallery, curated anew every six months. Those who want to add to their own portfolio can take advantage of the painting room in The Villa with complimentary painting supplies and canvasses.

The One Hotel, Barcelona

Check in: This five-star hotel is in the perfect location – on the city’s Golden Mile – for guests who want to immerse themselves in modernist architecture, galleries aplenty and designer shopping.

The collection: Exuberant contemporary pieces by artists such as Joan Miró, Manolo Valdés and Antoni Tàpies. Eye-catching works are also exhibited in guest rooms by artist Fernando Prats, who has created headboards depicting the beauty of a bird’s flight in every room. 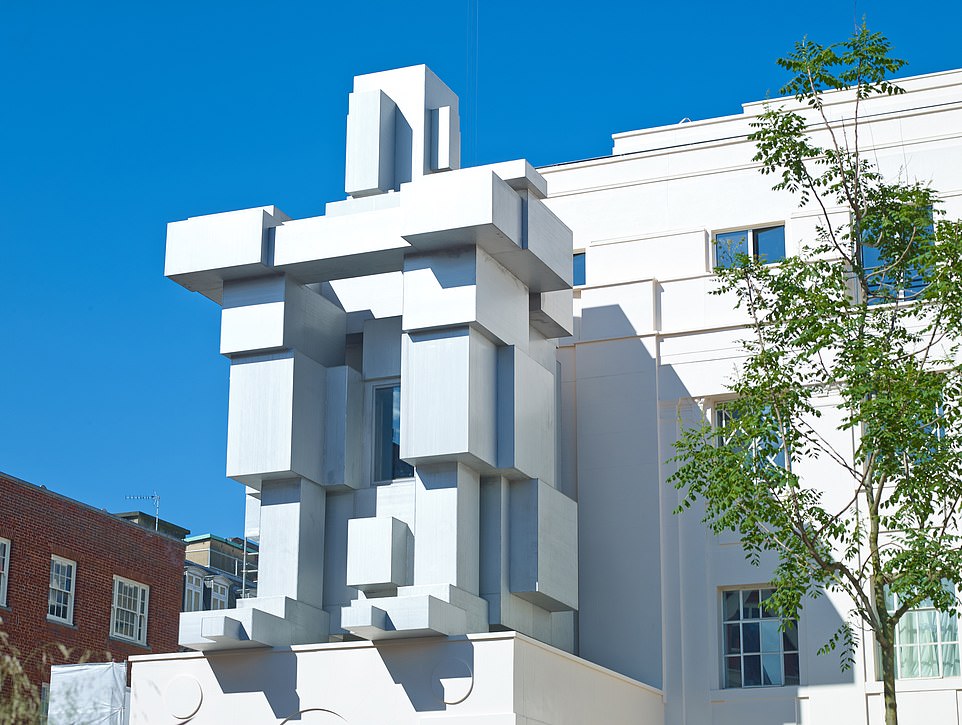 Eccentric: An outside view of Antony Gormley’s ROOM sculpture at the Beaumont hotel in London

Check in: This magnificent Grade II listed 1926 Art Deco building has been transformed into a hotel by top restaurateur Jeremy King. King, to construct a ‘fake history’ for the hotel, dreamed up the fictional hotelier Jimmy Beaumont, who opened a hotel in London to escape Prohibition-era New York.

The collection: Celebrated artist Antony Gormley gets top billing here with his notable art work ROOM, a three-storey inhabitable sculpture created as an experimental work. It’s a bedroom 33ft high, clad entirely in dark-fumed oak and furnished only with a bed. Gormley was, apparently, aiming to ‘sculpt darkness itself’.

Diners in the Colony Grill can view murals by American artist John Mattos depicting American sporting scenes and legendary venues as well as a set of 48 black-and-white cartoons of famous characters from the 1920s, 1930s and 1940s. Centre-stage within a suede-lined bookcase is René Magritte’s oil Le Maître D’École, while works by Samuel John Peploe and John Duncan Fergusson face the bar. Two rare Charlie Chaplin posters by Auguste Louis Leymarie from 1917/18 complete a group of early 20th Century works.

Check in: Much admired as the most lavish Regency-era mansion in Ireland, this 20-bedroom, five-star hotel can be admired both for its art and its 614-acre estate, which is ideal for relaxing in.

The collection: Much of the period when the house was being renovated and converted into a hotel was spent sourcing a suitable collection of Irish and Ireland-related art to decorate the huge space. The result? An impressive collection by Irish artists as well as a number of continental and American ones.

Family portraits of past owners were reinstalled after about 90 years and now provide a wonderful display on the grand staircase. The first painting you encounter when you step inside is a full-length portrait of Sir Audley Mervyn, who was related to the three families who have owned Ballyfin at one time or another – the Crosbys, the Poles and the Cootes. There are also group portraits by George Hayter.

Price tag: From €580 per room, per night, including breakfast (ballyfin.com).

The stylish PuXuan in Beijing where guests are treated to a stunning wealth of priceless sculptures, ceramics and paintings throughout the hotel

Check in: Close to the Forbidden City and Beijing’s main commercial and shopping district, the PuXuan, located above the Guardian Art Centre, has 116 rooms, most of which feature an art safe with two compartments. One for the usual valuables and the other to store any artwork you buy from the nearby art centre.

The collection: Guests are treated to a stunning wealth of priceless sculptures, ceramics and paintings throughout the hotel, including artist Qiu Deshu’s The Mountain at the hotel reception on level one. 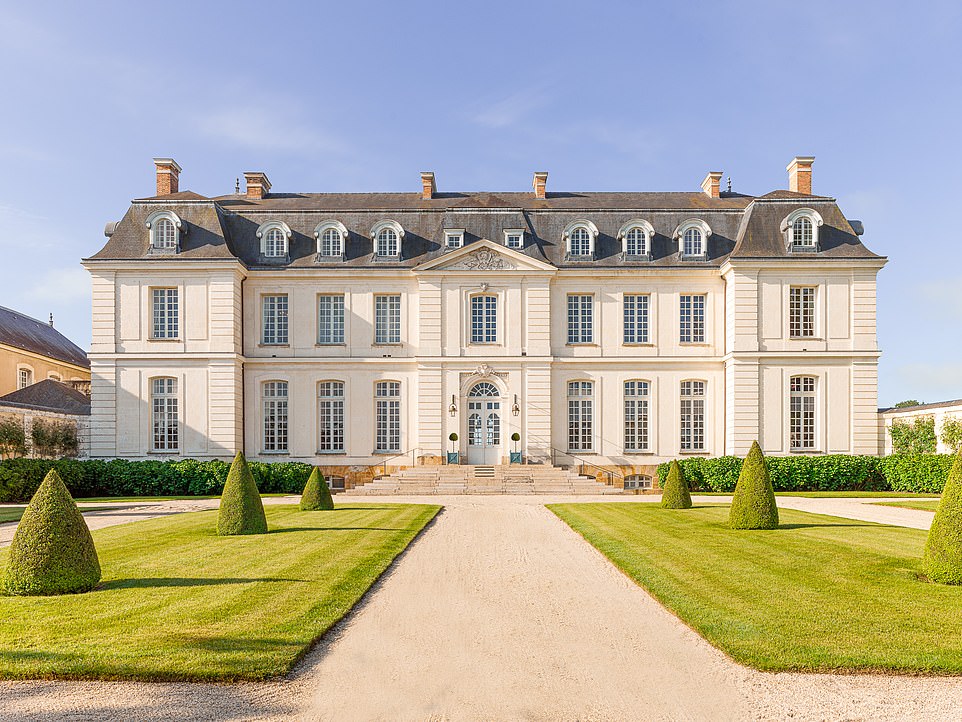 Check in: Newly opened as a luxury hotel, this chateau is one of the finest remaining examples of 18th Century French neoclassical architecture. Its former owner, Baron Jacques Pineau de Viennay, demanded the best and got it, from the creamy white tuffeau (limestone) quarried nearby to the best furnishing and finishes, including painted walls by the artist Jean Baptiste Pillement. His only other examples today are found in just one place, the Petit Trianon, Marie Antoinette’s private garden palace at Versailles.

The collection: Outstanding art includes murals depicting a fanciful life in Asia in the chinoiserie style, painted on canvas-covered walls in the aptly named Salon Chinois – once the Baron’s private drawing room. Guests can wander among art from a number of centuries, with fabrics on display from designers including Christian Lacroix and Jean Paul Gaultier.

Check in: Small and intimate, with just 18 rooms, it’s the most luxurious hotel on the island. To add to its art credentials, the owner, Cuban artist Sandra Pérez Lozano, runs a charitable programme that lets other artists stay at the hotel and help with the local community. When you’re not checking out the art, join dawn yoga sessions, take cooking lessons, explore the island by bike or indulge in massages.

The collection: A frequently changing collection by the owner as well as artists in residence such as Ernesto Sanchez, who is part of a group of creative Cubans behind the 13th Havana Biennial earlier this year. 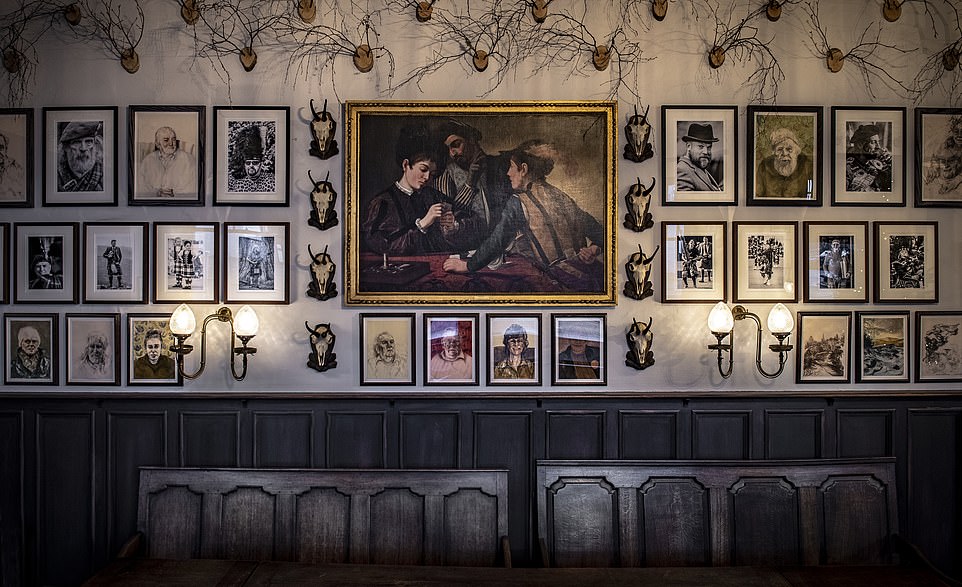 Check in: This grand former Victorian coaching inn, which reopened last Christmas, has 46 rooms and suites. Decor mixes ultra-modern with traditional Scottish. The restaurant overlooks the River Clunie, and there’s a jewel-box-like cocktail bar and plenty of public areas, all packed with interesting art, artefacts and stories.

The collection: A vast wealth of newly commissioned contemporary works as well as examples of other valuable art and antiques. In all there are said to be more than 14,000 pieces of art throughout the hotel, including in guest rooms. All have been meticulously curated by the hotel’s owners, Iwan and Manuela Wirth, co-founders of the world-renowned gallery group Hauser & Wirth.

Price tag: Rooms with breakfast from £250 a night (thefifearms.com).

…And a floating collection

Check in: A voyage on board a Viking cruise ship takes you into Scandinavia’s most scenic and fascinating corners, as well as the charming canals of Amsterdam, the tranquil old fishing village of Skagen, and visits to Oslo, Kristiansand, Stavanger, Flåm and Bergen. In Oslo, visitors can stroll the streets as Edvard Munch once did, visit his final resting place and take a behind-the-scenes tour of the Munch Museum, home to the largest collection of the artist’s work.

The collection: Art on board Viking’s ocean-going ships is made up of 28 priceless pieces and is one of the largest private collections of Munch artwork outside Oslo.