The Nutcracker dancers detail agony of the beloved play

Dancers of the decades-old Nutcracker ballet are not just talented in choreography – but top grade acting.

With grace and gratitude, the ballet dancers have described some of the most daunting details about their day-to-day job.

Aside from getting the wonderful opportunity to work while doing what they love, the poised performers live in constant fear of the unknown on and offstage, a dance critic report for The Washington Post explains.

Some of the fears include the ever-familiar injuries and illnesses that are passed around – and even landing in piles of pee during grand jetés at live shows.

And in workplace with children, teens and adults of various ages, viruses run rampant.

One dancer details the huge ‘hysteria’ after one little member, sick with the norovirus, accidentally infected hundreds of others.

The Washington Post photographed ballet dancers tending to injuries and performing at the Boston Opera House in November. Shown: Dancer Sage Humphries massages her legs during intermission backstage at The Nutcracker performance 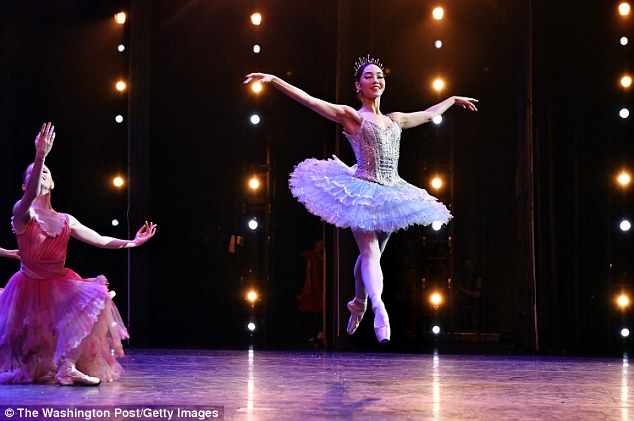 Seo Hye Han also performs the role of Snow Queen, during a performance of The Nutcracker at the Boston Opera House 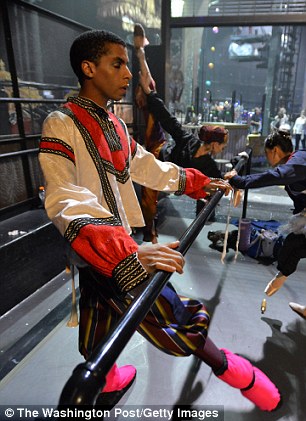 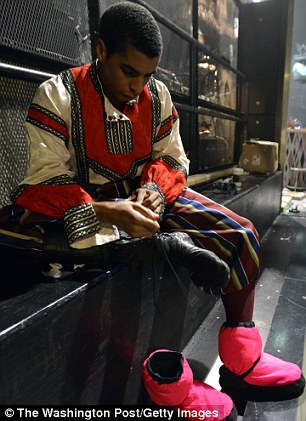 Dancer Lawrence Rines warms up for his role as lead Russian during intermission backstage at The Nutcracker performance, at the Boston Opera House

‘Like wildfire, it spread … and by end, like, over 200 people had it, including kids, their parents, dancers, artistic staff,’ dancer Lawrence Rines says.

However, that didn’t stop the entertainers from pushing on. Rines says he recalls hearing ‘a kid in the wings taking the hat off the costume and throwing up’ in it.

During the Pennsylvania Ballet’s performance, corps de ballet dancer Harrison Monaco recalls making a leap across stage into something wet.

It seems one of the children couldn’t hold their bladder when Monaco saw someone from the crew attempting a quiet sweep behind all of the performers.

Counsels dancer Elizabeth Walker reveals she visited all types of doctors for her slew of sprains and injuries – more notably the horrific feet issues from pointe shoes.

‘I’ve had broken bones, but a corn is this horrible nerve pain,’ Walker says of the severe calluses. 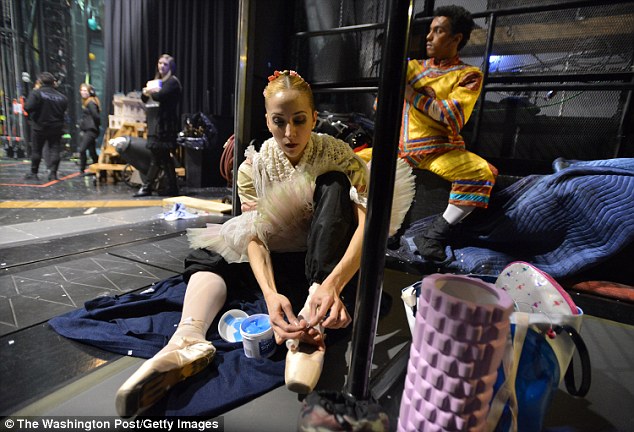 Dancer Ekaterine Chubinidze tapes her toes with a package of blister prevention patches on hand during intermission backstage at The Nutcracker performance, at the Boston Opera House 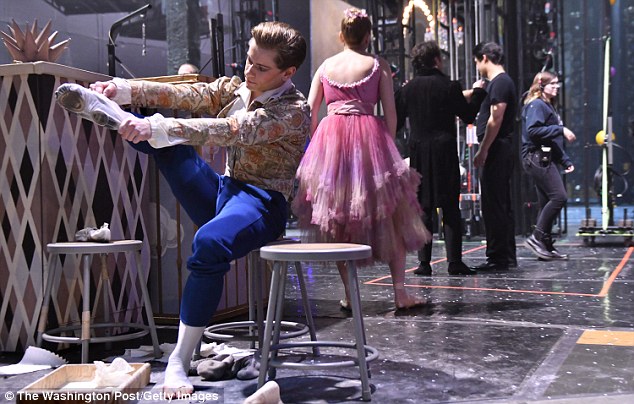 Derek Dunn applies rosin to his feet and ballet slippers during intermission backstage at The Nutcracker performance, at the Boston Opera House

‘Dancing ‘The Nutcracker’ gave me a six-month injury,’ she tells the newspaper, while speaking of the ‘end-of-the-series limp’ every performer is familiar with.

‘The first week, you’re like, ‘I got this.’ But it’s a different story the fourth week into it. The fatigue, the repetition … you can get complacent,’ she said.

Michael Sean Breeden, who says he previously played the very-physical character of the Candy Cane, has suffered a ‘smacked chin, banged skull, smashed toes and trips,’ to name a few.

He said: ‘I had a year where I’d get caught in the hoop in a different moment each time. Okay, so next time, I’d have my mental strategy, like, don’t pull your chin in. And I’d clear that hurdle, and the next sequence I hadn’t over-analyzed would get me.’

Others mention the prop and costume catastrophes – including falling off stage and losing prominent accessories.

Still, you’d never know by looking at these experts, who always appear smiling, and on top of their game.

‘Only closed-teeth smiles,’ Walker added. ‘Breathe through your teeth.’