The one lesson I’ve learned from life: Comedian Dom Joly says dads cry over the empty nest too

The one lesson I’ve learned from life: Comedian Dom Joly says dads cry over the empty nest too

By Liz Hoggard for the Daily Mail

Dom Joly, 53, came to fame in prank show Trigger Happy TV in 2000, and today he is a travel author and broadcaster.

He walked from Belgrade to Istanbul last year for BBC2 series Pilgrimage.

He is married to artist Stacey MacDougall, with whom he lives in Cheltenham, Gloucestershire, and has a daughter, 21, and son, 17.

DADS CRY OVER THE EMPTY NEST, TOO

As a kid I lived quite a split life. Half the time I was in a war zone (I was born in Beirut to British parents), the other half at the Dragon School in Oxford, with most of the current Tory cabinet.

I hated boarding school, but it taught me to attack before you’re attacked. Which is where my comedy comes from — always shooting from the hip.

Comedian Dom Joly (pictured), 53, said he ‘wept like a baby’ after dropping his daughter, 21, at university in Oxford

I’m amazed I became a comedian. I’ve no acting skills, I never did stand-up. I just did this specific type of comedy — hidden camera and practical jokes.

But there’s a certain age after which you can’t dress up as a squirrel any more without humiliating your children.

And in a way I always wanted to be a travel writer. Comedy sort of got in the way, but it opened other doors for me.

Everything I’ve done has made me who I am. And I enjoy who I am and what I do. The problem is I get bored. If someone offers me a project, I’ll do it.

When I look back at mistakes I’ve made — saying yes to the wrong thing, for example — it’s always been when I’ve made a decision straight after finishing something.

After making a TV series you’re knackered because it’s non-stop. But when things are going well you want to keep the ball rolling. 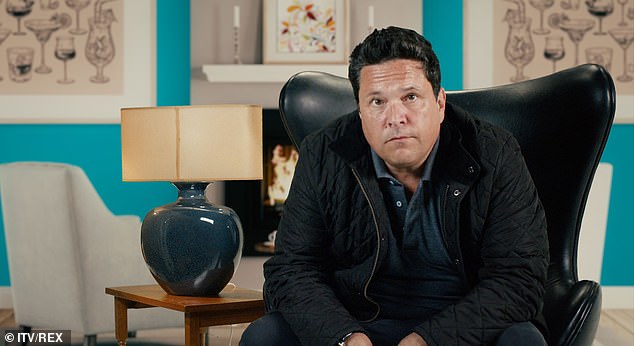 The father-of-two (pictured in April 2019), who is married to artist Stacey MacDougall, said his next fear is the empty nest as his son, 17, does his A-Levels

My next worry is the empty nest. I think about it every day. My daughter is in her second year at Oxford. I wept like a baby after dropping her off at university.

My son is doing his A-levels, but he’s out quite a lot now. So occasionally my wife and I stare at each other going: ‘Is this it?’

My biggest dread from the moment my daughter was born has been the thought of meeting her boyfriend.

There’d be this spotty youth knocking on the door and I’d be there holding a shotgun.

And then, two weeks ago, I met her first boyfriend. I really liked him. It was so much better than I’d feared it would be.