The Open: Jordan Spieth is back! Texan feels at home on the links in front of the best fans in golf

The Open is back and so, too, is Jordan Spieth. The popular American marked the return of the game’s most historic event with a wonderful first round 65 on Thursday that served to underline his own welcome renaissance.

The Texan also opened with a 65 the last time The Open was staged in England, when he went on to become the Champion Golfer of the year and claim his third major title at the age of just 23. Four years on, here was more persuasive evidence that he’s recovering all his formidable powers.

This was the sort of easy-on-the-eye return that the R&A would have dreamed about. At the top of the leaderboard, the purist’s golfer Louis Oosthuizen sprinkled all his unrivalled grace over the proceedings to set the pace with a fabulous 64.

Gutsy left-hander Brian Harman plotted his way round this thoughtfully prepared layout to match his compatriot Spieth. Former Open Champion Stewart Cink, at the grand age of 48 and with two wins already to his name on the PGA Tour this season, shot 66.

There was plenty of English cheer as well, from the moment three loyal footsoldiers from the European Tour got proceedings underway at 6.35am right up to Tommy Fleetwood’s birdie at the 18th shortly before 8pm to make it five home players on 67.

Andy Sullivan, part of that first group, had set the ball rolling, followed by the nation’s two former major winners in the field, Danny Willett and Justin Rose, and Jack Senior, the man who has found his game on tour at the age of 32. Paul Casey, who has finished 2nd, 17th, 26th, 4th and 7th in his last five majors, made another useful start, with a round of two birdies and 16 pars for a 68. 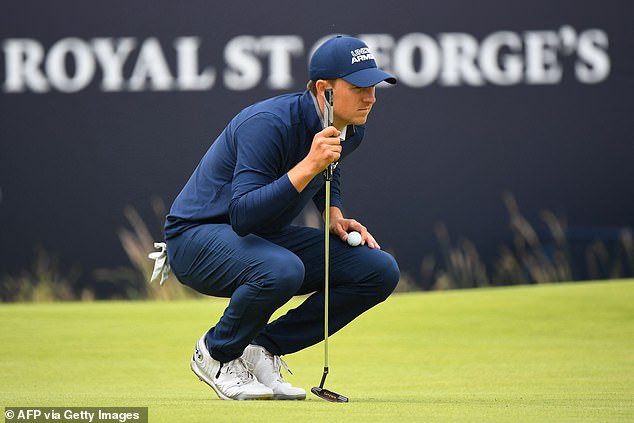 The 27-year-old scored 65 on Thursday, underlining his own welcome renaissance at the top 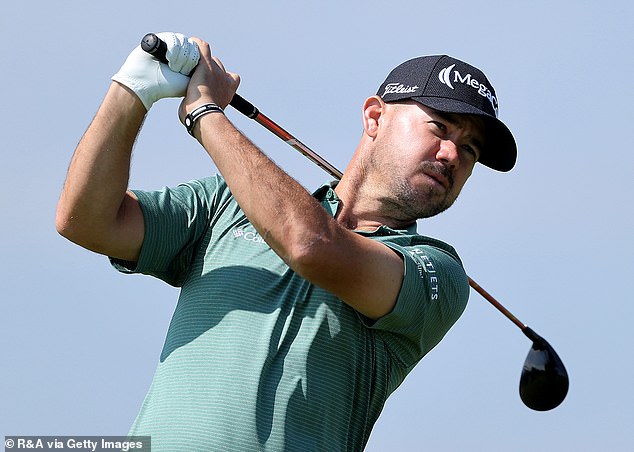 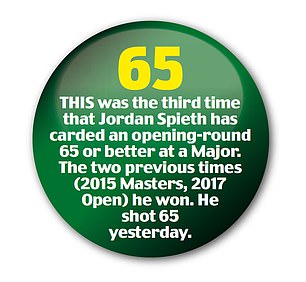 All this was played out on a perfect day for links golf, with enough breeze to separate the shotmakers from the chaff, and the sort of noise and vibrancy from the 32,000 spectators permitted that provides The Open with its unrivalled soundtrack. ‘They’re just the best fans in golf,’ said Spieth.

It says much about Spieth’s love of links golf that even when he lost his game he still turned in spirited displays at The Open. He finished tied 9th in 2018 and tied 20th the following year, despite final rounds of 76 and 77 respectively.

‘It’s because over here I’m thinking more about the shots I’m trying to play rather than thinking about my swing,’ said Spieth. ‘Instead of trying to pull off yet another driving range shot back home, you’re always thinking about the little punch shot or something similar here that might give you an advantage, and you can never switch off.

‘I guess what I’m saying is there’s a lot more externals to think about and that’s where I should be living.’ Spieth didn’t seek to link this 65 with the one he opened with at Birkdale. ‘I think back then I was striking the ball better than at any time in my career and I’d have won the Claret Jug that week at any venue,’ he said. 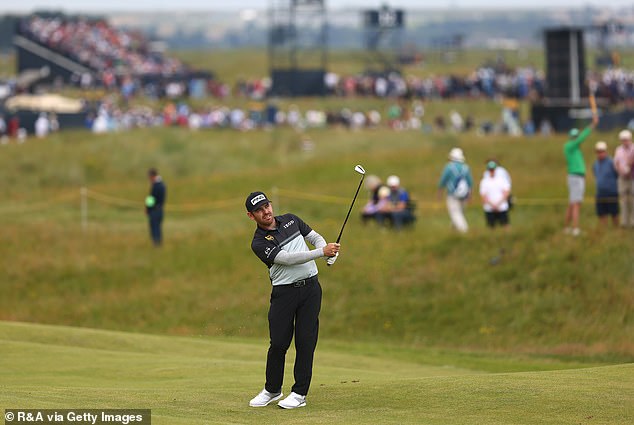 ‘This time I’m pleased with my progress and I’m not surprised I’ve shot another 65 because I’ve been trending in this direction this season.’ Asked if the next major victory will feel different, given the tribulations he’s been through, Spieth smiled and responded: ‘I don’t know, but I hope I’ll be able to answer that question on Sunday.’

Oosthuizen simply continued from where he left off at the US Open and the US PGA before that — he was runner-up at both — with another sublime round in the mid-sixties as he continues the search for a second major title to add to his Open success in 2010.

No need to look far for the reason behind the 38-year-old’s consistency. In 12 months, he’s gone from 50th to 1st in putting on the PGA Tour. He did little wrong in losing out to Jon Rahm and Phil Mickelson on the majors stage this year, and Spieth or anyone else for that matter will surely not beat him this time with anything other than their A games.

Rose’s bogey-free round represented a good recovery following his collapse at the US Open, where he missed the halfway cut by a bundle. He needs a spectacular performance here to have any chance of forcing his way into Europe’s Ryder Cup team.

Another with similar designs is Sergio Garcia, who almost missed his tee-time. He shot 68 after needing a police escort to make it, getting caught in the terrible traffic jams that clogged the cramped roads of Sandwich. As the day progressed, the weather turned cooler with the wind picking up and scoring later on was almost two strokes higher on average than those who’d played early.

The rounds of 66 delivered by Benjamin Hebert from France and former US Open Champion Webb Simpson were particularly admirable, as was the 67 posted by last year’s PGA Champion, Collin Morikawa, on his Open debut. 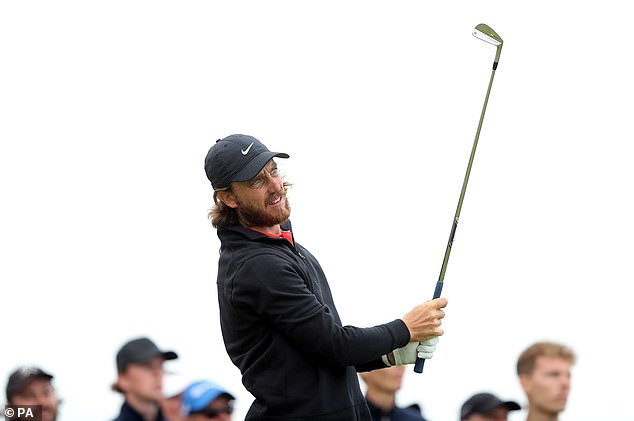 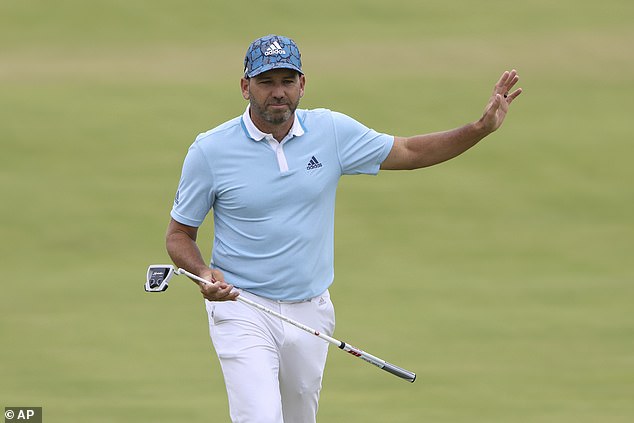 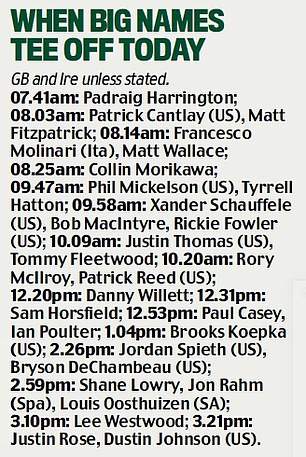 They were the sort of conditions in which Fleetwood thrives, and he was delighted with his three-under round. It included one of the day’s most unlikely birdies at the par five 14th, where he hooked his iron shot off the tee into a lie so bad he could only gouge it out sideways. He then struck a long iron from over 200 yards to 8ft and rolled in the putt.

The most spectacular sequence of shots, however, was delivered by American Brandt Snedeker. He followed his tee shot to the par three 16th that finished two inches from the flag by holing his next iron to the 17th for an eagle two.

At the other end of the scale was Mickelson, out in the evening chill. The oldest major winner in history in May didn’t break 80. He placed 156th out of 156 competitors when he walked off the 18th green.