The other Queen of Jordan: In search of Fahrelnissa Zeid

When T. E. Lawrence passed through Amman a century ago at the head of the Arab Revolt, the city had fewer than 6,000 inhabitants. The only aircraft flying in were Ottoman biplanes hoping to drop a bomb on the British officer’s head.

Now the Jordanian capital has a population of more than four million and is a major international hub, served by architect Norman Foster’s breathtaking Bedouintent-inspired Queen Alia Airport.

A desert delight: Petra is rightly considered to be one of the wonders of the world

In the Seventies and Eighties, before this boom, Amman was home to Fahrelnissa Zeid, the painter and sculptor whose fabulously bold abstracts and portraits are being rediscovered and given a major retrospective at London’s Tate Modern.

Hoping for a glimpse of the world Fahrelnissa knew, I have come to Amman – and to Tannoureen, the sumptuous downtown restaurant that was once her home and studio.

Uniquely, perhaps, this allows me to dine on exquisite Arab mezze in what was once the artist’s bedroom.

Jordan is a remarkable country. With no oil riches to speak of, it has still taken far more than its share of refugees displaced in the region’s wars. Fahrelnissa was a refugee of sorts. When she died in 1991, aged 89, it was the end of a peripatetic life that was as noteworthy as her art.

She spent her teens in Ottoman Istanbul, then married Iraqi prince Zeid bin Hussein in 1933. She knew Hitler, Kemal Ataturk – the founder of modern Turkey – and in Fifties London, counted the Queen Mother as an acquaintance.

But she lost nearly all her royal in-laws when they were executed in the 1958 Iraqi military coup.

Fahrelnissa would not recognise the glass-clad towers and luxury hotels that exist now. The huge, cool suites with walk-in wet rooms at The Boulevard Arjaan, where I am staying, look down on the hotel’s al fresco Italian restaurant and a plaza linked to swish shopping malls. Jordanians like to shop.

But many of the things she enjoyed remain. A lone bagpiper still plays a lament on the walls of the ancient citadel that stands guard over the Roman theatre and souk below. The remaining columns of the Temple of Hercules point to the heavens, as they have since the 2nd century.

Fahrelnissa’s art melded modernism with Islamic and Byzantine styles. You can find a similar mix throughout Jordan – in the Byzantine mosaic map of the Holy Land at the Church of St George in Madaba; in the angular lines of the fabulous crusader castle at Kerak; in the patterns of the fabrics that Bedouin women still wear.

I encounter just such a woman in a Fahrelnissa portrait at Amman’s Darat al Funun gallery.

This arty bolthole, an officer’s club during the inter-war British Mandate, is full of contemporary Arab art as well as a small, brilliant collection of Fahrelnissa’s work.

Close your eyes and listen hard enough, and the corridors still ring with shouts for Scotch and soda. I opt instead for several slices of the sweet cheese pastry kanafeh – an addictive Middle-Eastern dessert – at the rooftop café, and finish as Amman’s mosques broadcast the evening call to prayer. The muezzins are pre-recorded these days, but the resulting cacophony, startling pigeons from the rooftops, is still haunting.

Jordan delights in such moments, though nothing is as striking as emerging from the perilously narrow rock cleft that leads to the cliff-face facade of the Treasury in Petra.

A three-hour drive from Amman, the city’s temples, stairways and cisterns were carved out of stone by the Nabateans more than 2,000 years ago.

A monumental work of art as much as architecture, Petra had a hypnotic pull on Fahrelnissa, who visited often. 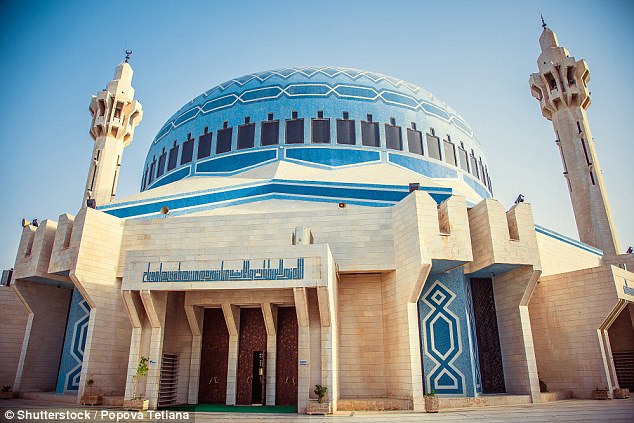 A capital combination: The King Abdullan I Mosque, one of the landmarks of Amman

On the drive back to Amman I take in Mount Nebo – where God allowed Moses to look out over the Promised Land in which he would never set foot. Then I dip down to Al-Maghtas, the Unesco World Heritage site on the River Jordan where Christ was baptised.

Finally, I follow Fahrelnissa’s example and take a hot plunge at the artist’s favourite Roman baths and springs at Hammamat Ma’in. High above the Dead Sea, this is a true oasis where the springs reach 60C, and desert valleys turn as vividly green as a Fahrelnissa canvas. Life, perhaps, imitating art.

The Fahrelnissa Zeid exhibition at the Tate Modern is on until October 8. Tickets £12.50. See tate.org.uk.