The pandemic has led to 225,000 excess deaths in the US, study finds

The pandemic has directly or indirectly led to 225,000 COVID-19 deaths in the US, whether those people died of COVID-19 itself or an issue linked to the pandemic, such delaying care over fears of going to hospitals amid outbreaks, a new study finds.

Researchers at Virginia Commonwealth University found that 150,000 people died of COVID-19 infections between March and August 1 after analyzing death certificates.

But they also discovered an additional 75,000 deaths beyond the expected fatality rates and even beyond the COVID-19 deaths during that period.

As of September 19, the US had officially recorded just 198,589 COVID-19 deaths, according to the study, published Monday in JAMA.

The Virginia Commonwealth study suggests that the death toll of the pandemic goes beyond deaths attributed directly to coronavirus.

While the US has had the fourth-highest rate of deaths from COVID-19 itself over the entire course of the pandemic – behind Belgium, Spain and the UK – fatality rates remained highest among Americans after May, when rates had fallen in other hard hit countries, a separate Harvard and University of Pennsylvania study found.

Excess deaths remained considerably higher in the Sun Belt states that tried to reopen and experienced summer surges, suggesting that attempts to reopen drove not only drove up COVID-19 deaths, but those from other causes

According to Johns Hopkins University’s tracking, more than than 214,000 Americans have died of coronavirus as of October 12 – more than have perished in any other nation in the world.

Rumors that the high death toll is fabricated have flown, on social media and even among scientists, according to the Virginia Commonwealth University (VCU) researchers.

But they argue their study helps to disprove that notion.

‘Contrary to skeptics who claim that COVID-19 deaths are fake or that the numbers are much smaller than we hear on the news, our research and many other studies on the same subject show quite the opposite, said lead author Dr Steven Woolf, director emeritus of VCU’s Center on Society and Health.

He notes that the Sun Belt was particularly hard-hit by coronavirus, with 3,933 COVID-19 deaths between March and August in Arizona, 8,517 deaths in Florida and 10,062 in Texas. 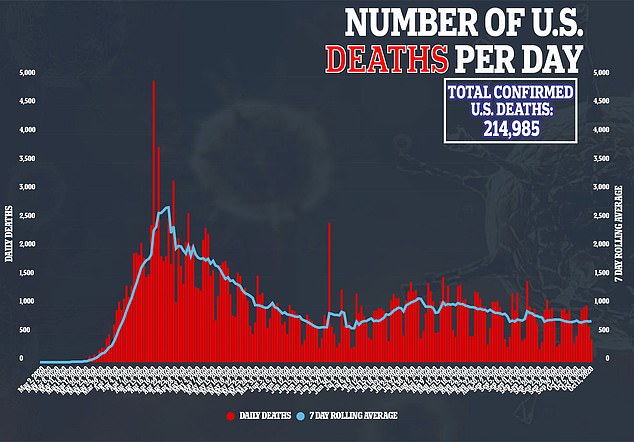 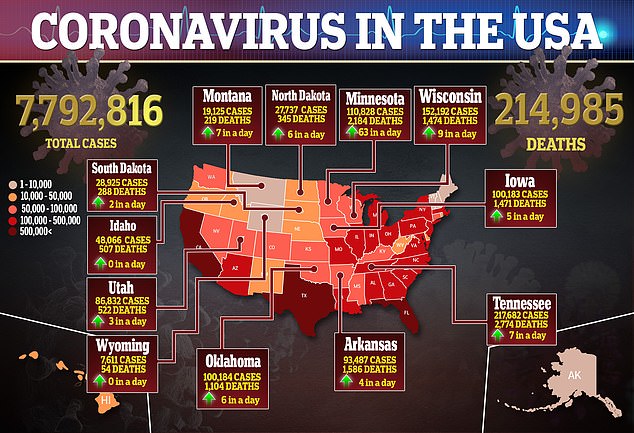 In Texas, for example, there were 100,951 deaths over that five month period.

That was nearly 18,000 more than expected, and still over 7,700 more deaths than the additional COVID-19 deaths accounted for.

‘The high death counts in Sun Belt states show us the grave consequences of how some states responded to the pandemic and sound the alarm not to repeat this mistake going forward,’ Dr Woolf said.

‘Some people who never had the virus may have died because of disruptions caused by the pandemic.

‘These include people with acute emergencies, chronic diseases like diabetes that were not properly care for, or emotional crises that led to overdoses or suicides.’

Nationwide, dementia and heart disease deaths increased over the course of the pandemic.

President Trump has contended that lockdowns and economic hardship due to coronavirus will lead to a surge in mental illness and suicides – and has called on the Departments of Defense and Veteran Affairs to investigate the link.

But Dr Woolf insists that in fact it was the attempt to reopen that led to the spikes in deaths.

‘We can’t prove causally that the early reopening of those states led to the summer surges. But it seems quite likely,’ he said.

‘And most models predict our country will have more excess deaths if states don’t take more assertive approaches in dealing with community spread. The enforcement of mask mandates and social distancing is really important if we are to avoid these surges and major loss of life.’ 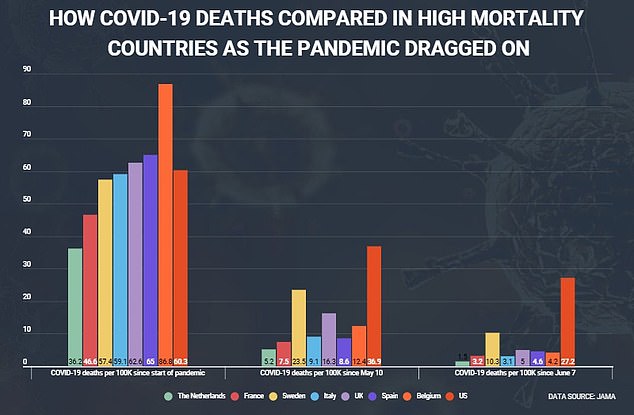 While death rates were higher in other nations over the entire course of the pandemic so far, the US has had far and away the highest COVID-19 mortality rates since May, when parts of the country began to reopen

He also says quick reopenings in the Sun Belt led to surges in cases, which in turn dragged out periods during which people were afraid to seek care, which may have led to more excess deaths as well as disabilities from other causes.

‘Imagine someone who developed the warning signs of a stroke but was scared to call 9-1-1 for fear of getting the virus. That person may end up with a stroke that leaves them with permanent neurological deficits for the rest of their life,’ Dr Woolf said.

He and his co-authors also point to the fact that despite the high fatality rates in New York as it became the pandemic’s epicenter in the spring, the death toll fell sharply after lockdowns, and the city had fewer excess deaths unaccounted for by COVID-19.

The research from Harvard and U Penn may bolster that theory.

While the COVID-19 death rates in the UK, Spain and Belgium swelled well beyond those in the US over the course of the entire pandemic, they fell precipitously by May and June.

Meanwhile, in the US, death rates remained more than twice as high as the UK’s fatality rates, and 15 times higher than Spain’s.