The party from above: Drone footage shows Burning Man from the skies

Fascinating drone footage taken above Burning Man shows stunning views of prominent installations at the arts and culture festival as thousands of revelers make their way around the desert by foot and bicycles.

An estimated 70,000 people are in attendance to the eight-day revelry – which sees burners don wild costumes and leave their cash at home for a week of all-night parties in the temporary city known as the playa, north of Reno, Nevada.

Photos from the drone footage show bikers trek around the desert and aerial views of art installations such as the Burning Man Temple. 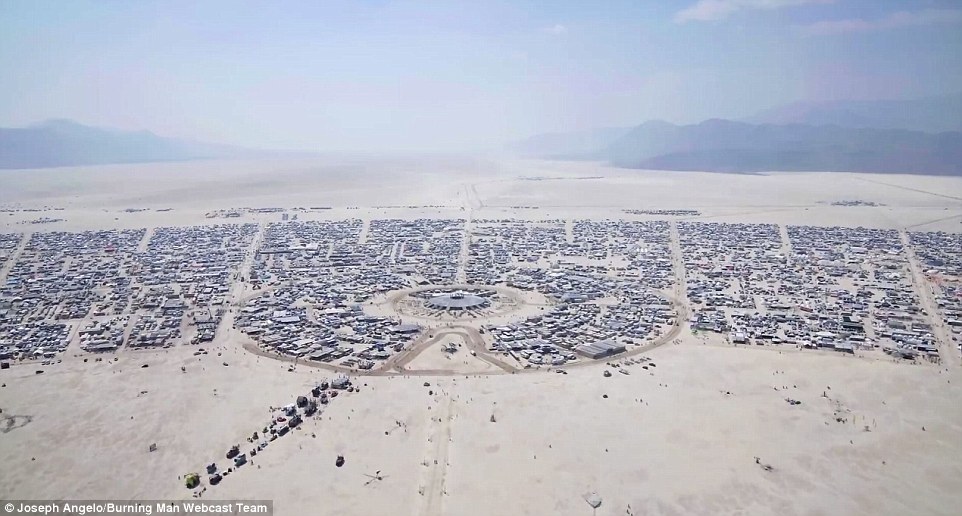 The Burning Man Webcast team captured the fascinating footage on Monday at the festival north of Reno, Nevada 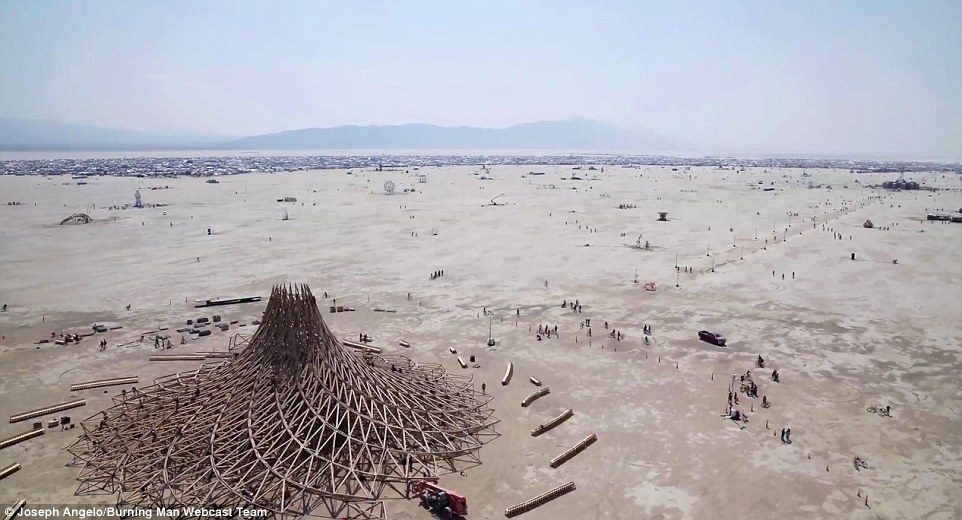 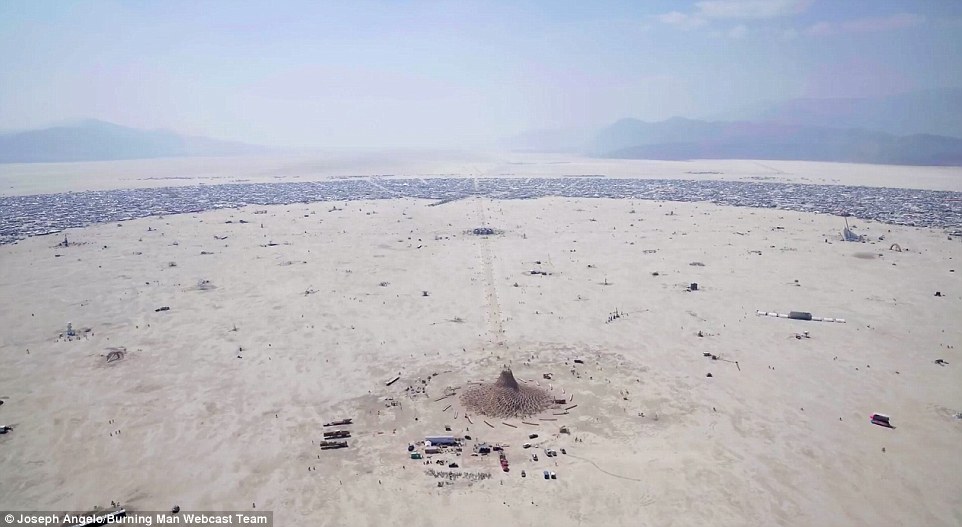 An estimated 70,000 people are said to be in attendance to the eight-day revelry this year 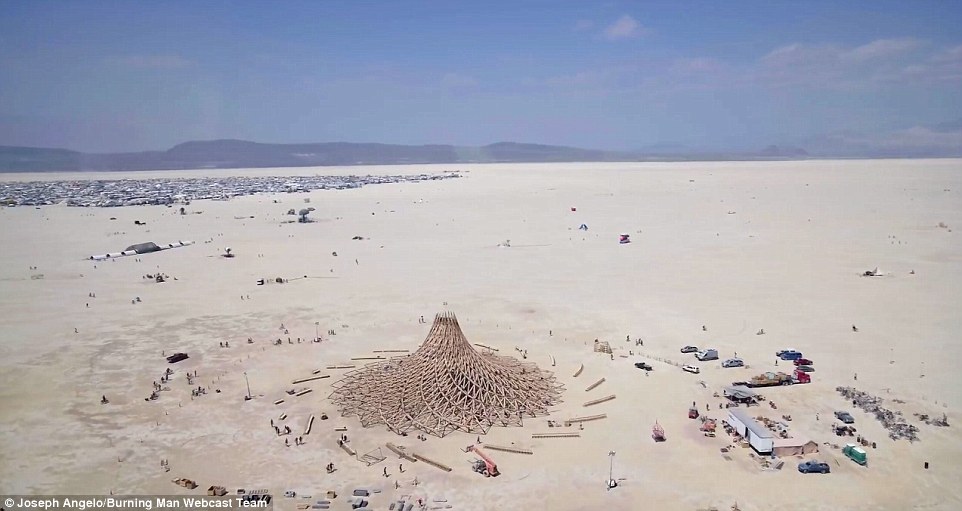 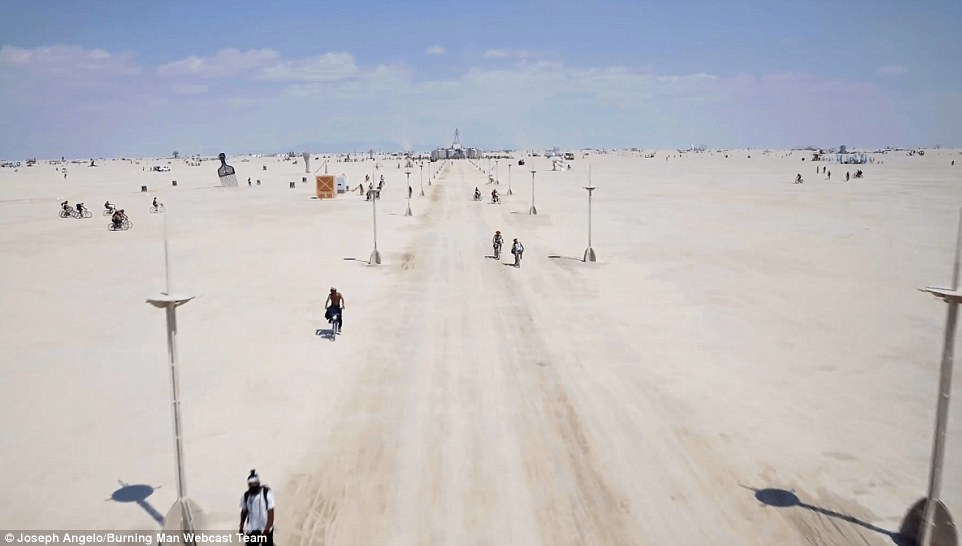 Bikers make their way around the desert at the Burning Man Festival in Reno on August 27, 2018

The festival is scheduled to run through the next Monday with celebrity guests such as the likes of Cara Delevingne and Elon Musk among previous years’ attendees.

Burners shared photos on social media this week from the mega-party, showing off nights with lit up bicycles, DJ sets and skimpy outfits. 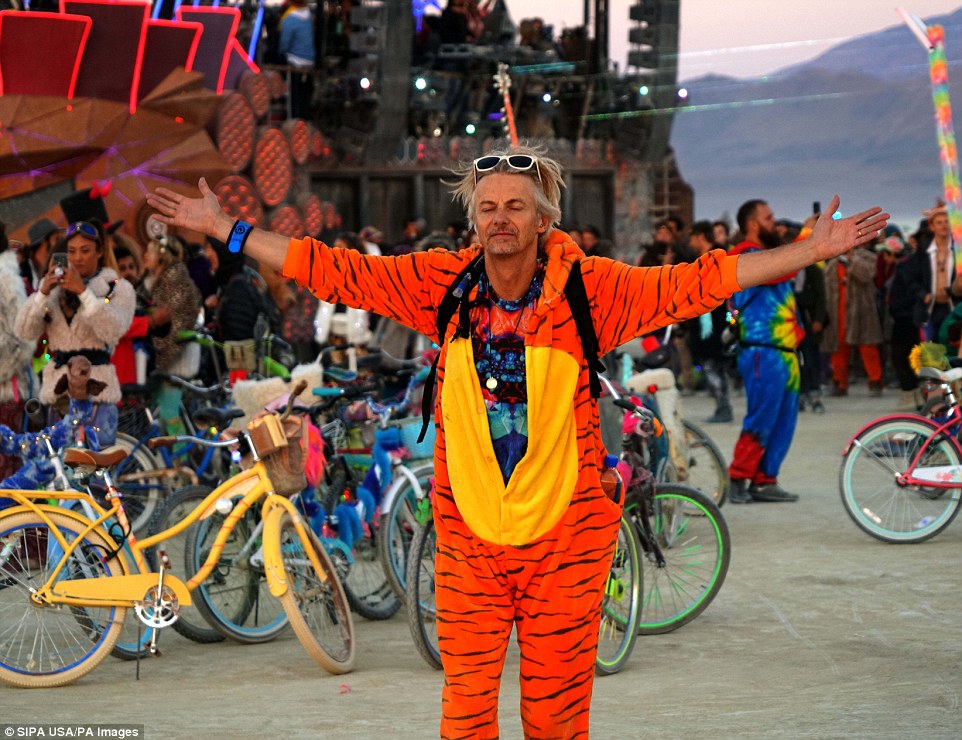 Peter Read, of London, raises his arms to greet the morning sun at Burning Man after all-nighter dancing on August 29, 2018 in Reno, Nevada 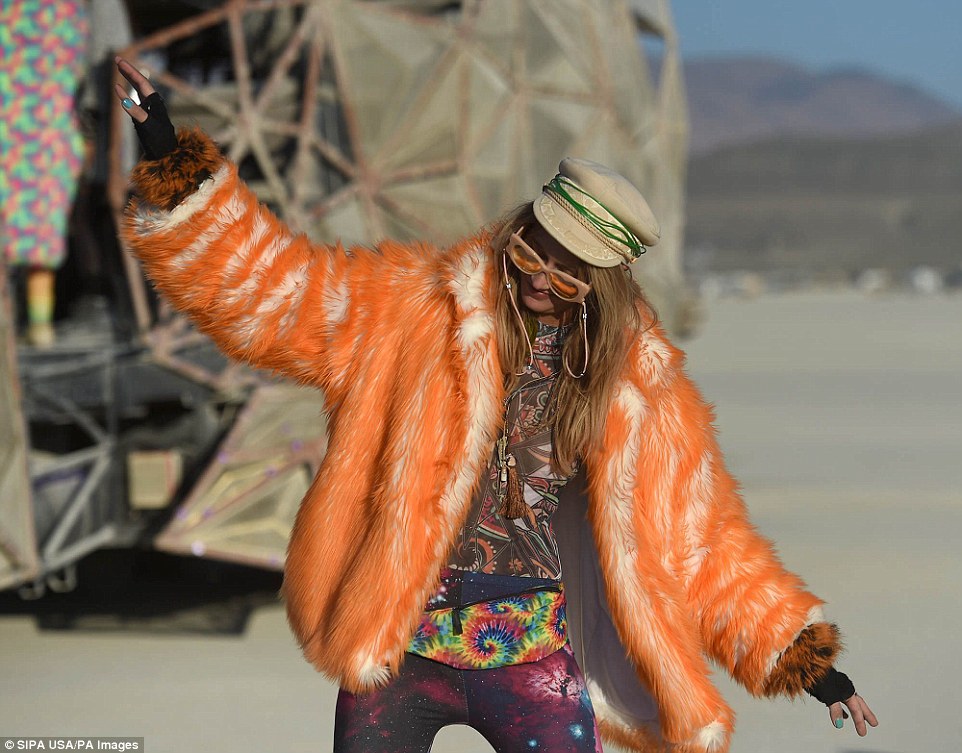 A woman dances as she dons a wild costume August 28, 2018 at the Burning Man festival 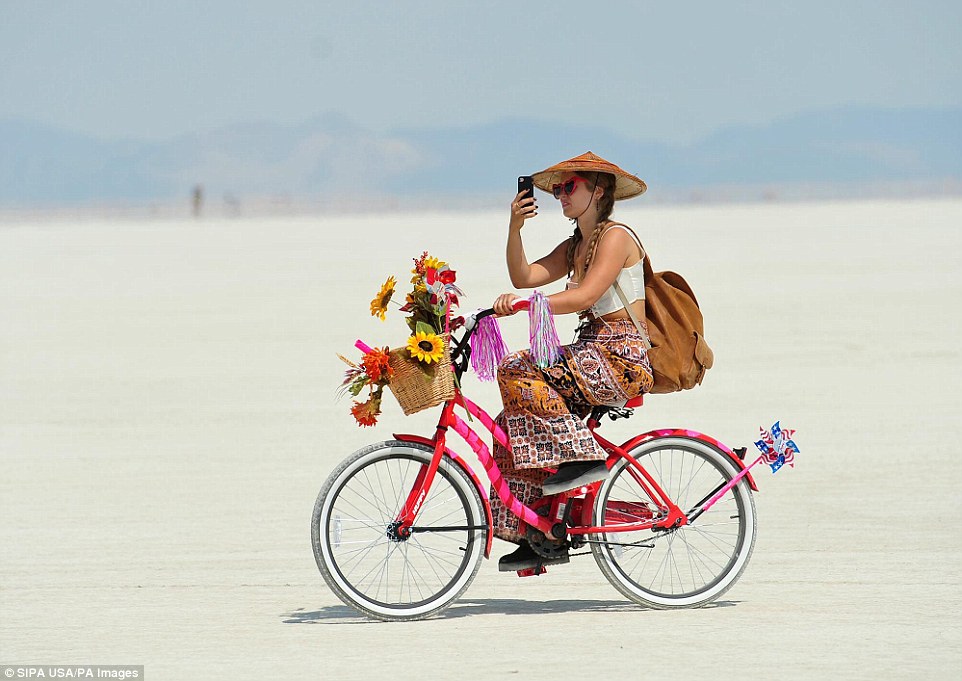 A woman rides her dike through the desert on August 28 at Burning Man 2018 in Reno, Nevada 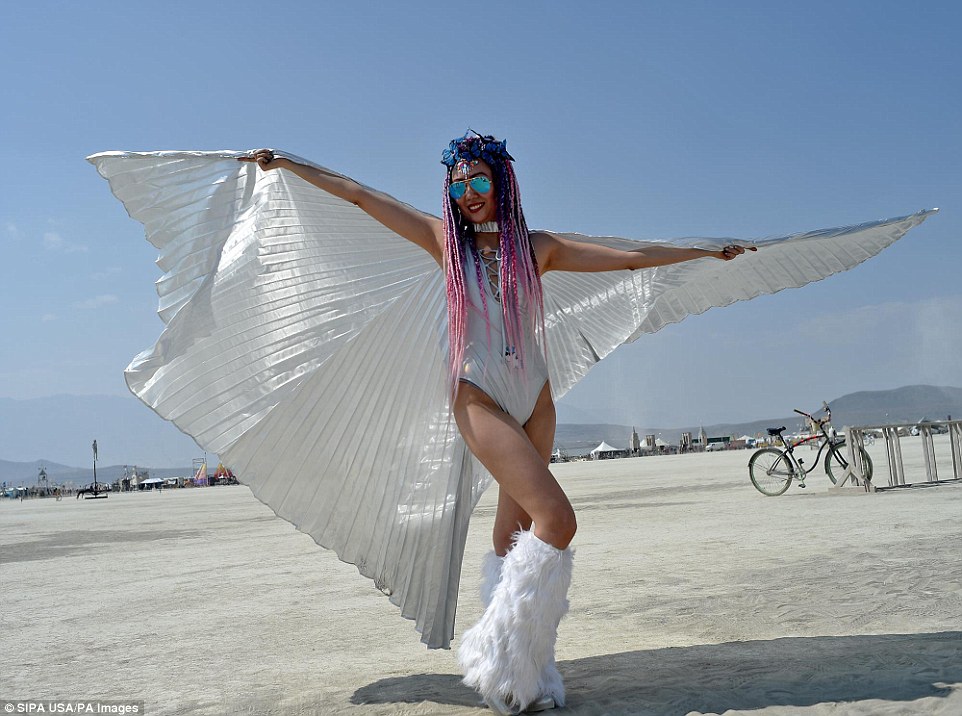 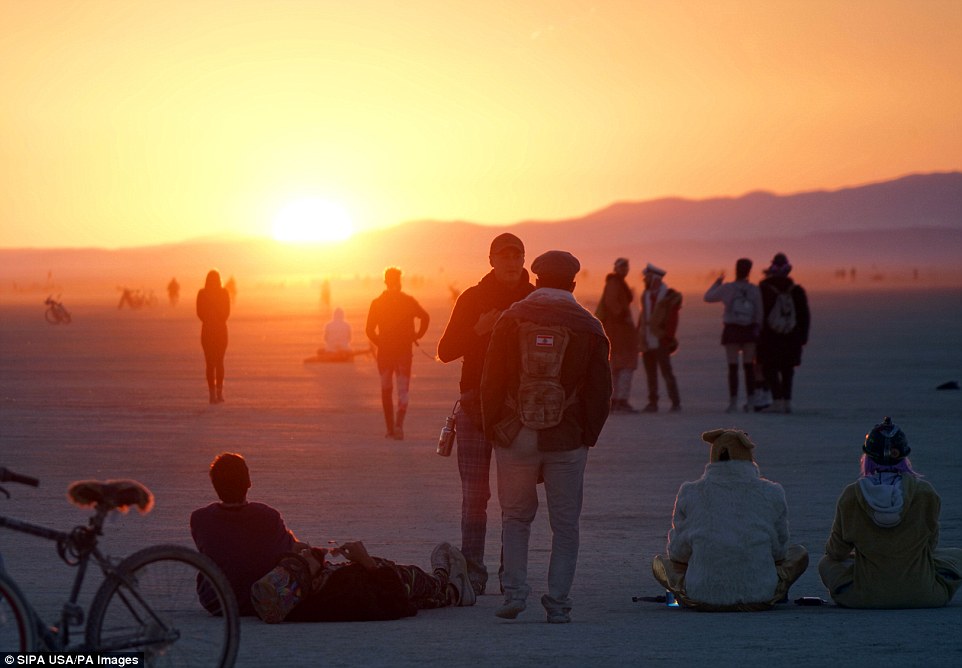 Burning Man attendees watch the morning sun clear the horizon after dancing all night on August 29, 2018

Thousands of festival-goers were forced to put their Burning Man plans on hold Sunday, as the event was delayed on its first day.

Revelers waited for hours on the entrance road outside of the festival due to whiteouts and potholes and construction. 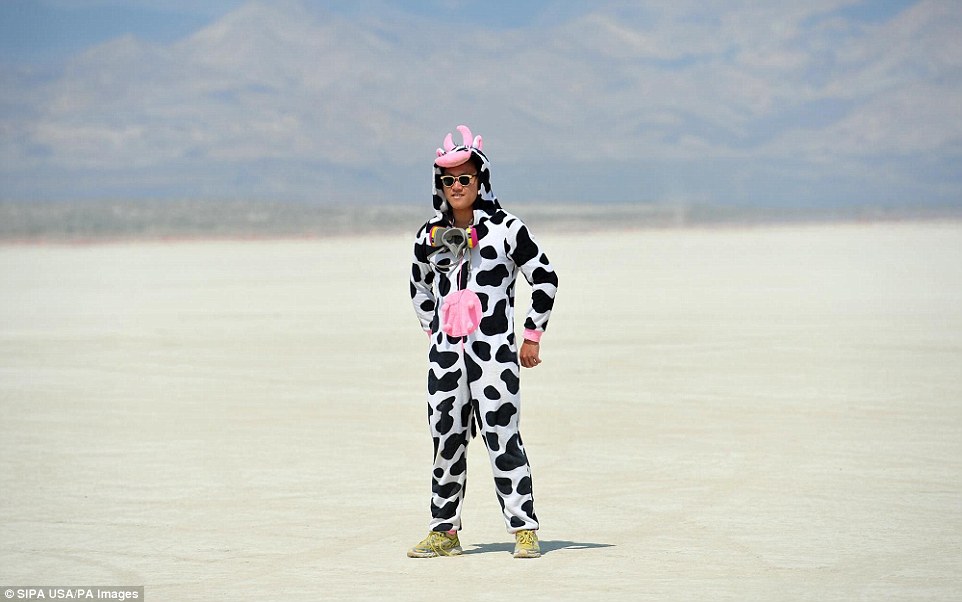 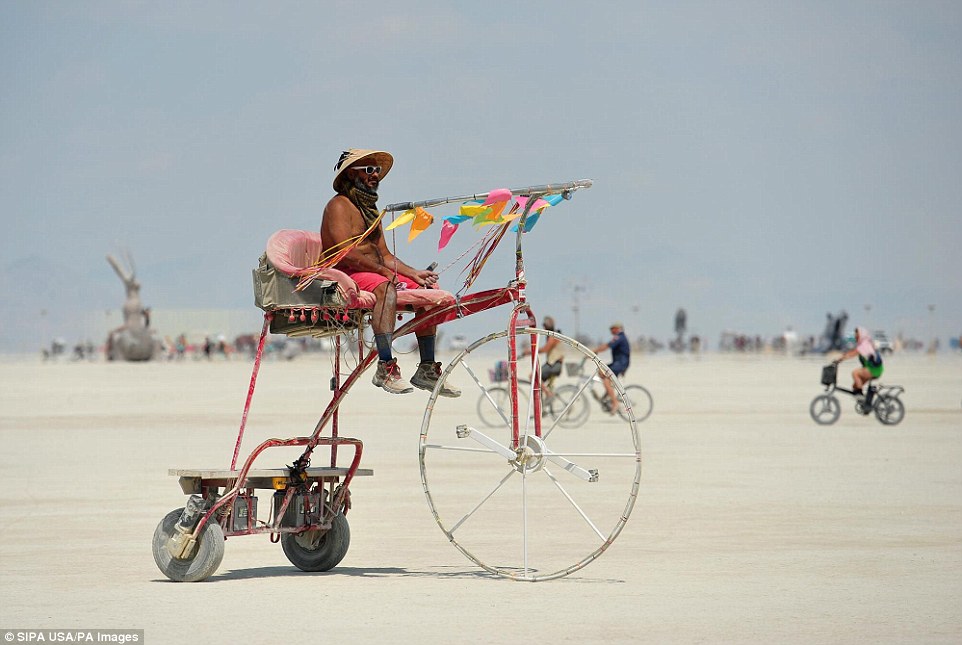 A reveler is shown sitting on a lifted bicycles August 28, 2018 at Burning Man in Reno 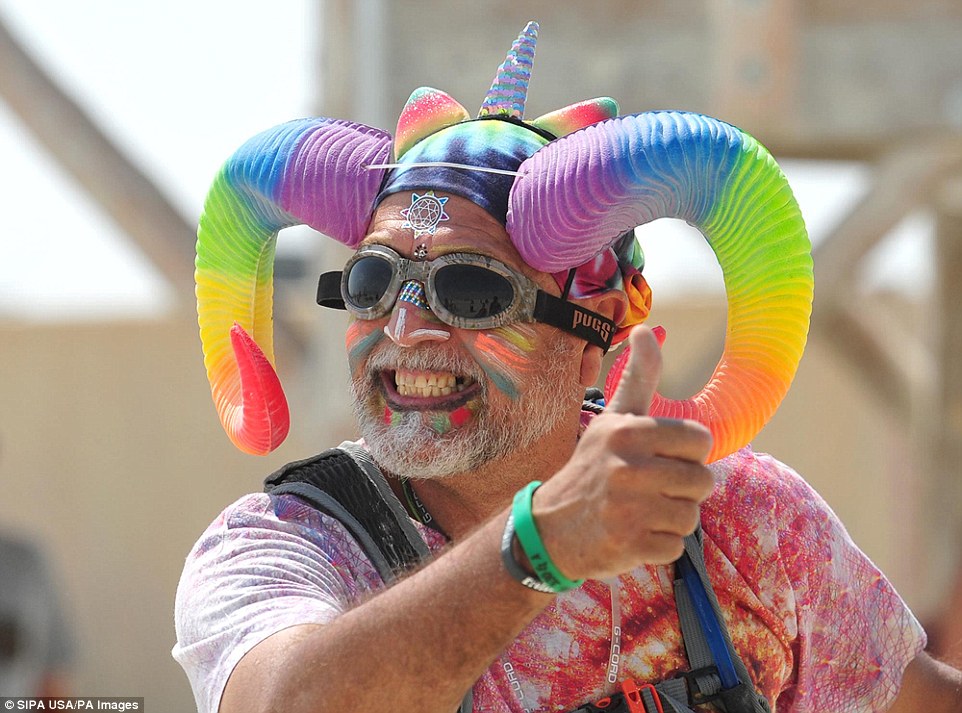 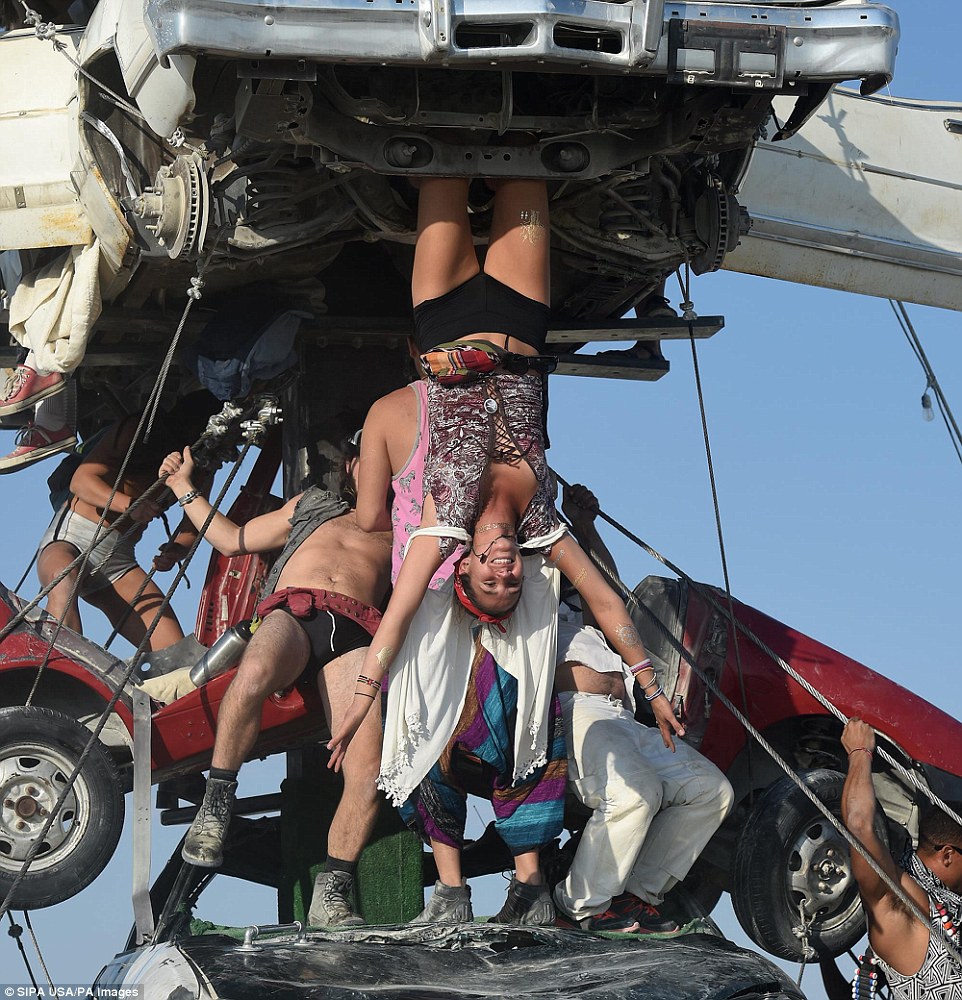 Burners shared photos on social media this week from the mega-party, showing off nights with lit up bicycles, DJ sets and skimpy outfits 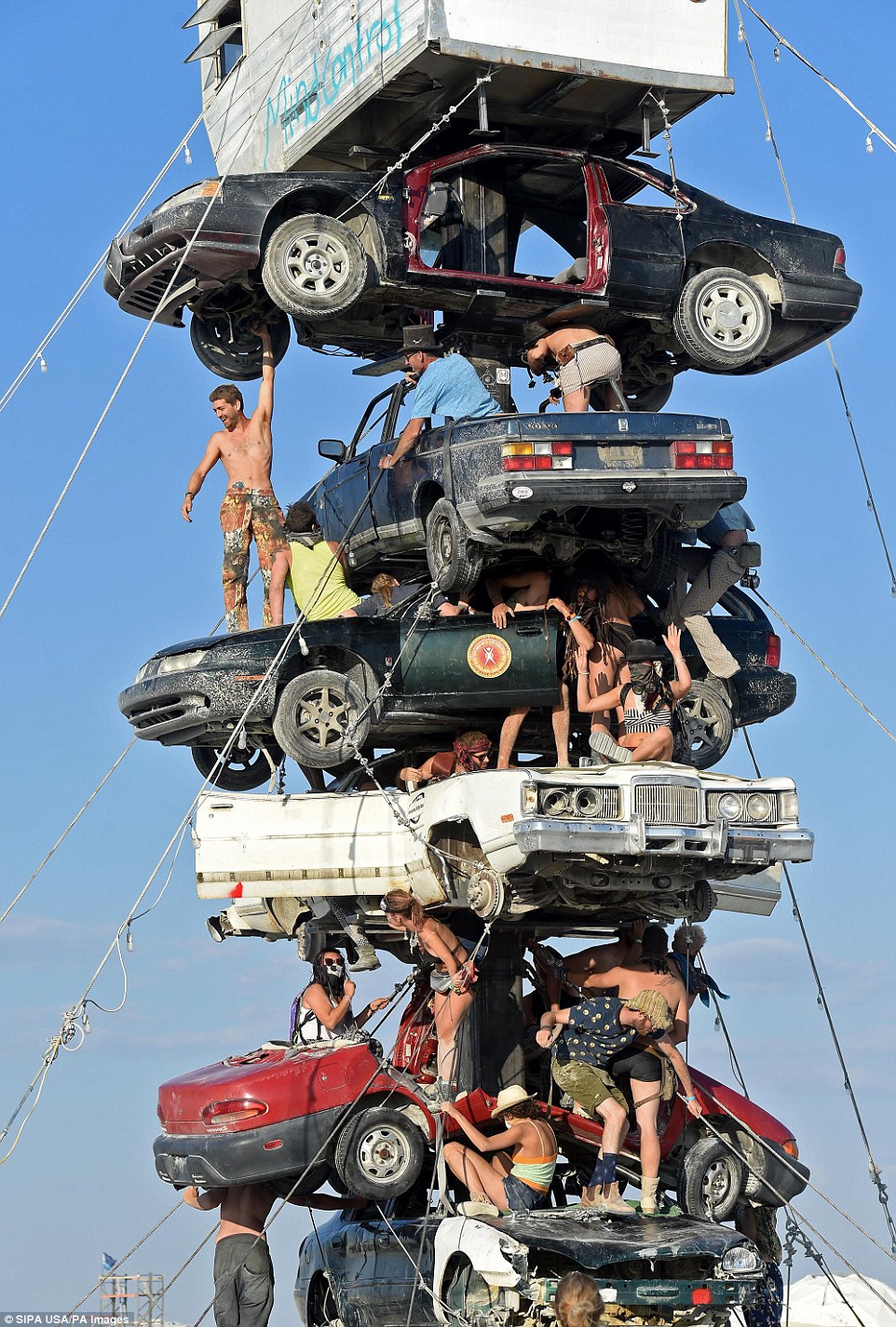 Revelers are shown hanging from the car installation at Burning Man on August 27, 2018 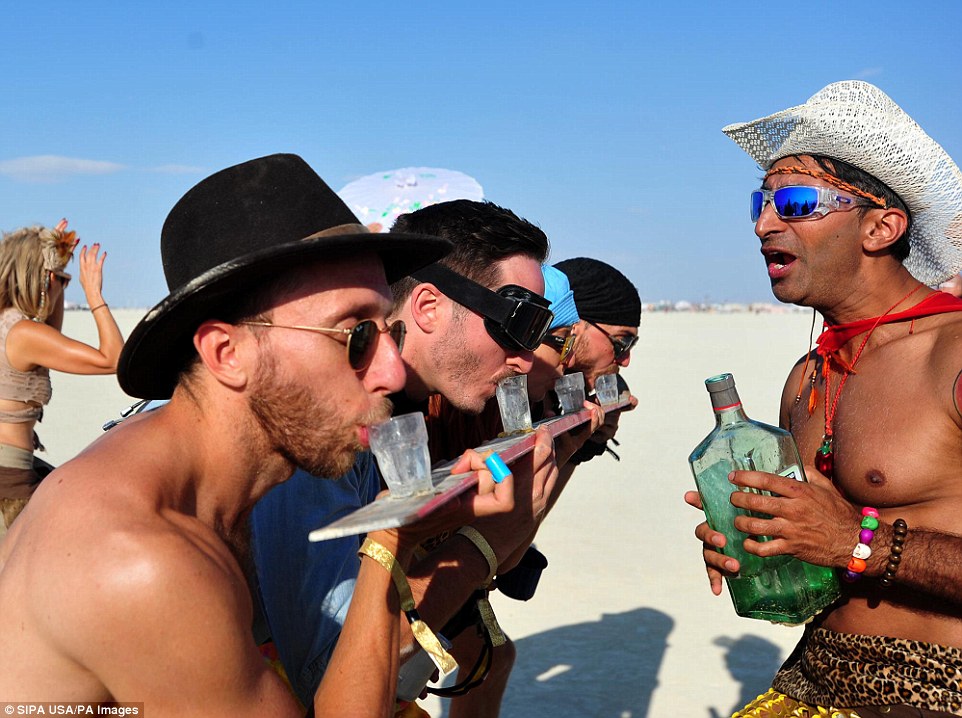 A group of people are seen taking shots Monday at the festival, which will continue on into early next week 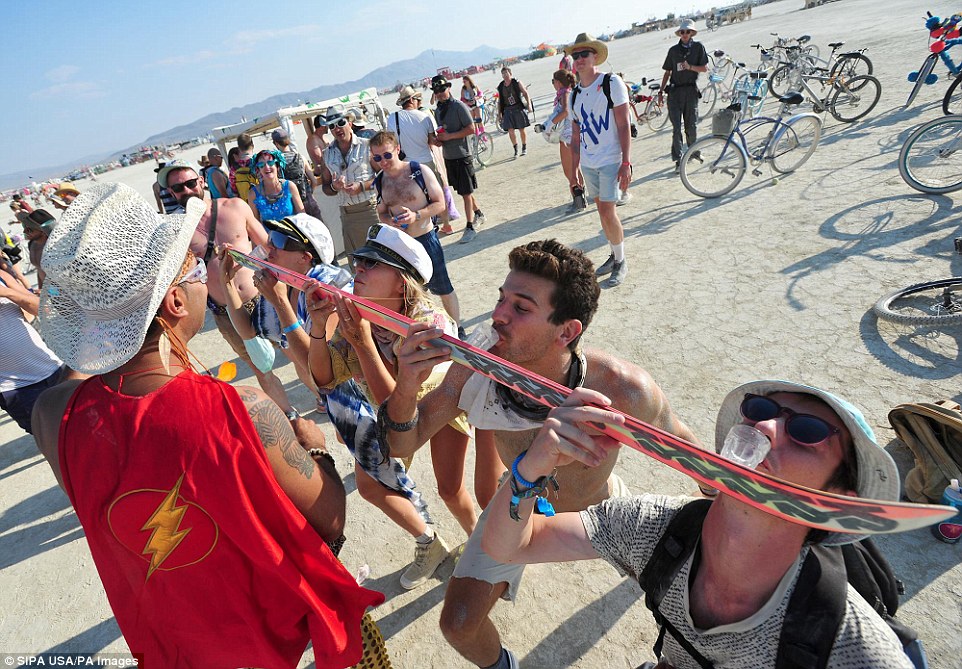 In 1990, the meager festival moved from the beach to the desert, and since then it has grown into one of the most infamous events of the year

In 1990, the meager festival moved from the beach to the desert, and since then it has grown into one of the most infamous events of the year.

Burning Man is guided by a set of 10 principles – including radical inclusion, self-expression, self-reliance, immediacy and leaving no trace. 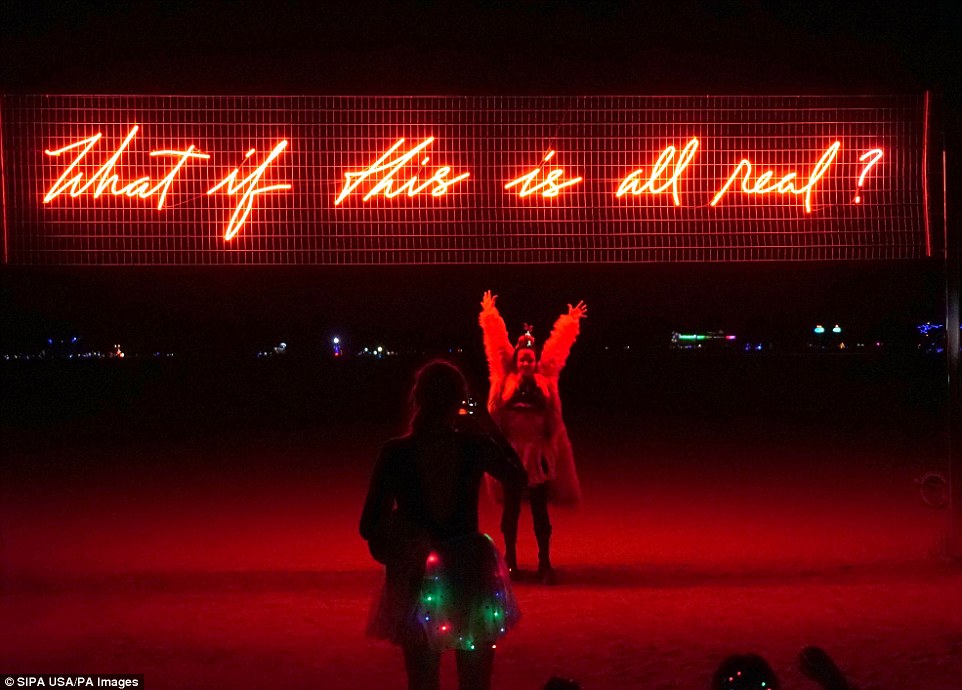 Evelyn Gavioli, od Paulo, Brazil, poses for a picture beneath a neon sign at Burning Man on August 28, 2018 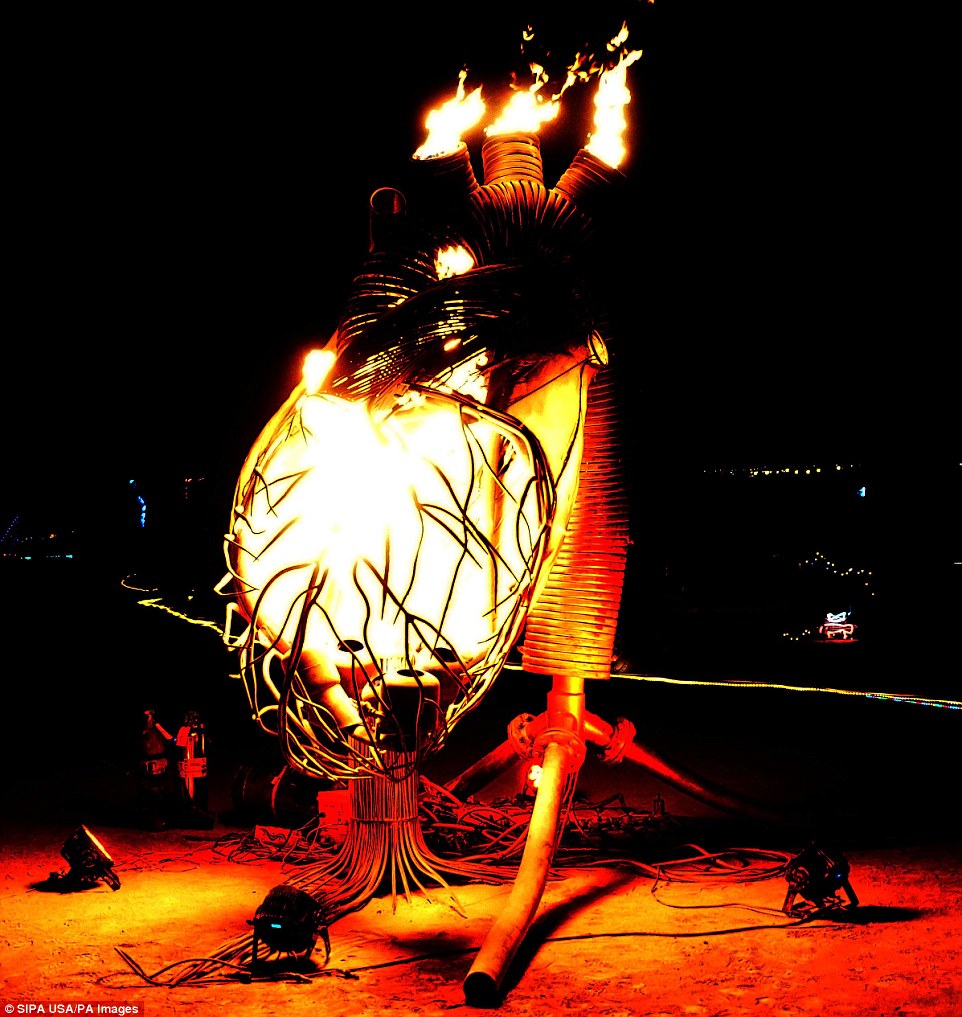 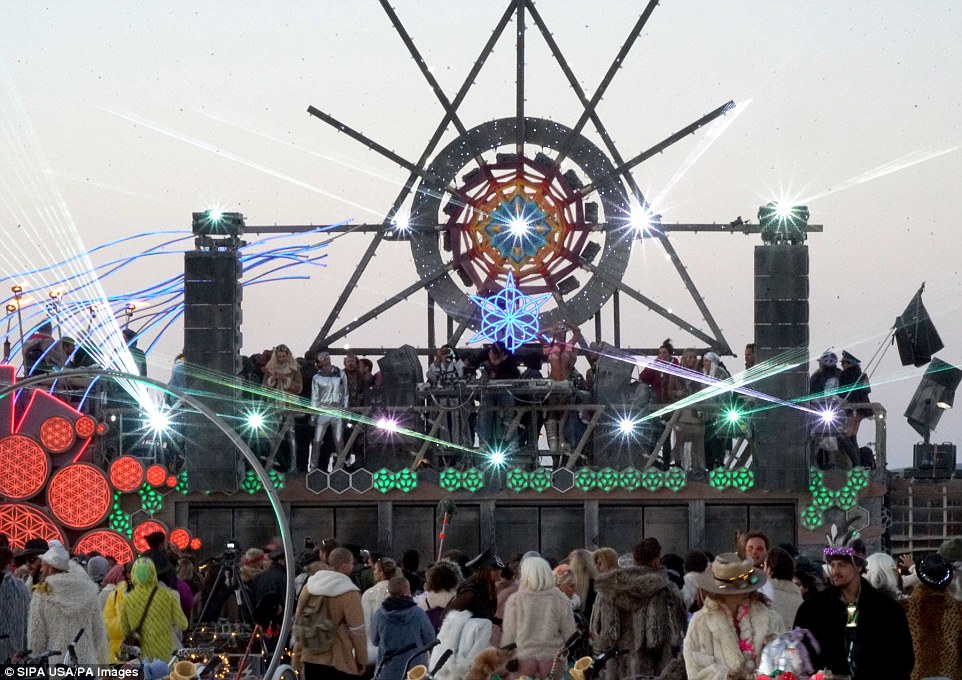 Hundreds of dancers crowd in front of the Mayan Warrior, a bus-sized mobile music stage at Burning Man on August 29, 2018