The passion and sadness of Catherine The Great

The REALLY sordid tales about Catherine the Great’s love life are pure fiction. But, as a lavish new TV drama reveals, the facts were pretty steamy too…

As the famous quote has it, ‘death is no respecter of persons’. In life, Catherine was a world-class stateswoman and supreme ruler of Russia, but in death she was reduced to an object of ridicule – damned by her well-documented, bed-hopping private life.

‘The sordid stuff we can dismiss completely, it never happened,’ says Virginia Rounding, who has written a definitive history of the empress who ruled Russia for more than three decades. ‘She was a highly civilised woman who would have been horrified at the stories. The tryst with a horse was a myth that emerged after her death in order to diminish her legacy. It was the very definition of fake news.’

Sky Atlantic is releasing a new drama about Catherine the Great’s life, with Helen Mirren magisterial in the title role

If you want a more accurate version of the life of the 18th century’s most powerful woman, tune in to Sky Atlantic’s new drama about her, on which Rounding served as historical consultant. It focuses on the last few years of Catherine’s life, with Helen Mirren magisterial in the title role. And, despite eschewing all the fleshier rumours of her life, is nonetheless full of eye-opening moments of drama.

‘The rule is the facts are invariably more interesting than anything you can invent,’ says Nigel Williams, who wrote the screenplay. ‘The thing about history is we think that because they all wore different hats and spoke in a funny way they were different from us. They weren’t. They were subject to exactly the same emotions as we are. Love, jealousy, fear – these are not modern inventions.

‘The one thing I knew about Catherine before starting the project was the schoolboy legends about her love life,’ he admits. ‘It shows the depth of men’s fear of strong women that they were prepared to degrade her with ludicrous stories. When you find out more about her, you can only conclude: what an amazing woman.’

Catherine came to power in 1762, ruthlessly deposing her husband, Tsar Peter III. By the time the series begins, Catherine had survived numerous coup attempts, built dozens of palaces and expanded the Russian empire. But the one thing she hadn’t done was remarry.

‘She realised that she needed the protection of strong men around her but would lose her power if she married any of them,’ says Williams. ‘There’s a real similarity with Queen Elizabeth I, who maintained her distance by creating the image of the virgin queen. Catherine did it in a different way.’

And what a different way it was. An open, liberally minded woman, Catherine enjoyed male company and took a succession of lovers through her life. ‘The 18th-century was much less puritan than the 19th,’ says Williams. ‘Catherine took lovers in the sort of way that was the 18th century equivalent of Tinder: don’t want him, I’ll have that one.’

In the series we see her plotting, planning and politicking, but also curious, inventive and passionate. She built up the art collection that now hangs in the Hermitage, St Petersburg, a palace she commissioned. Catherine’s physical legacy is impressive. The libraries, the art collections, the palaces are all largely extant. And these formed the most spectacular sets for the film, shot in the Hermitage and the Winter Palace. 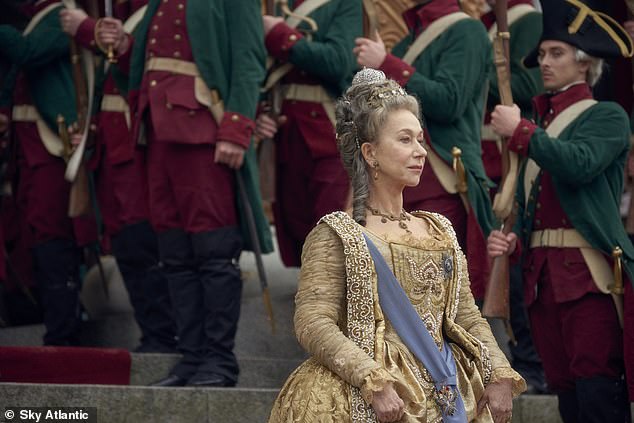 Catherine came to power in 1762, ruthlessly deposing her husband, Tsar Peter III. By the time the series begins, Catherine had survived numerous coup attempts, built dozens of palaces and expanded the Russian empire. But the one thing she hadn’t done was remarry

But if her cultural legacy was maintained, her personal reputation was less well preserved. Her son Paul I, jealous of her affection for her lovers, traduced her memory soon after he took power by encouraging the rumours of her appetites. Now it seems we will get the chance to discover something closer to the real Catherine.

‘The film captures a lot of her personality and her sadness at the end of her life,’ says Rounding. ‘I think people who have just heard myths will get a good solid introduction into what she was really about.’