The patients left in despair as drugs fail to arrive

For Sarah Playfair-Moss, weekly injections are the only way to keep excruciating back pain and stiffness under control.

The 42-year-old primary school teacher has ankylosing spondylitis — a type of inflammatory arthritis which mainly affects the spine — and has been treating it with injections of etanercept since 2009.

The drug — which reduces inflammation by blocking a protein called tumour necrosis factor (TNF) — has to be stored in the fridge and can be prescribed only by a hospital consultant.

So to avoid repeat trips to the hospital, like many of the 50,000 patients with the condition who are treated with anti-TNF drugs, Sarah has the medication delivered to her home by a company employed by the NHS.

However, last month, Sarah was left without her medication for four weeks, causing a painful flare-up.

‘I was off my medication for a month because my delivery company, Healthcare At Home, failed to organise a delivery and I had no other options,’ says Sarah, who is from Chelmsford, Essex.

‘I can’t get my medicines any other way; I can’t go to a pharmacy or GP to ask for them as they are prescribed by my NHS consultant rheumatologist to be delivered to my home once every four weeks. 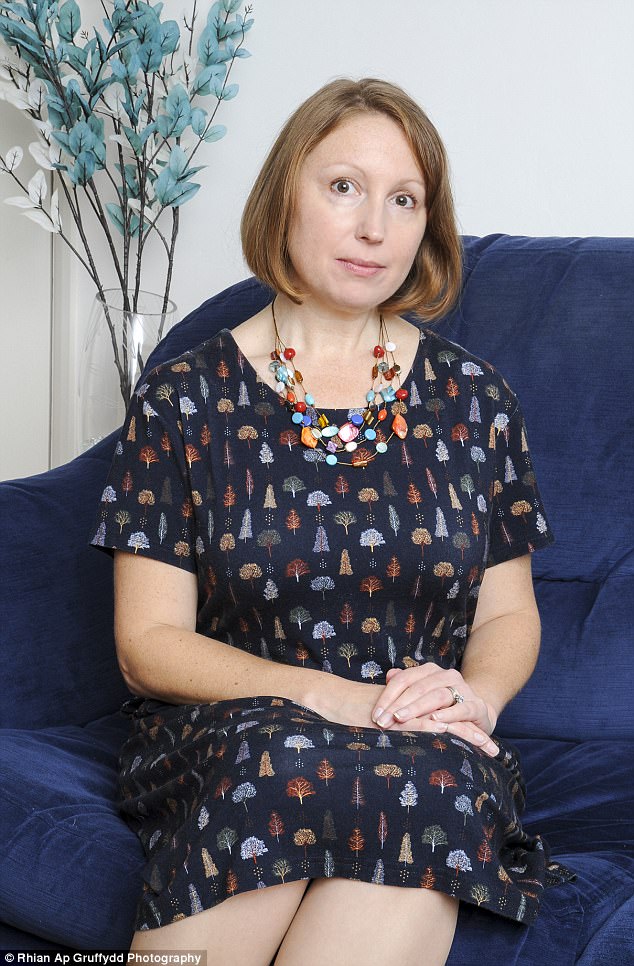 Last month, Sarah was left without her medication for four weeks, causing a painful flare-up

‘It is very important with ankylosing spondylitis to keep taking the medication because without it you can have flare-ups which cause intense pain.

‘With anti-TNF injections, the pain is manageable and I am able to work.

‘Over the four weeks I was without the injections, the pain in my lower back, hips, knees, elbows and neck was so bad I had difficulty sleeping — simple tasks such as carrying my handbag, holding a mobile phone to my ear or even opening a bottle of milk were difficult.

‘Even now that I am back on the medication, the pain is not yet under control as it takes a while for it to build up again in your system.’

Sarah was due to receive a new delivery of medication at the end of September, ready for her to administer her next injection on October 3. When she didn’t receive her usual phone call from Healthcare At Home to arrange delivery, she contacted the company on September 27 to say she had no injections left.

She asked to speak to a manager about her situation, but says she was never called back. She finally received the injections on October 26, four weeks later.

Sarah is one of 300,000 people in the UK who have vital, hospital-prescribed medication for conditions such as cancer, haemophilia, HIV, rheumatoid arthritis and multiple sclerosis delivered to their homes by private companies contracted by the NHS.

The service has been running since 1995, but has rapidly expanded since 2007 as part of a drive to reduce unnecessary hospital visits.

The drug treatments these companies provide now account for £2.1 billion, or 30 per cent, of the NHS secondary care medicines budget, according to the National Clinical Homecare Association.

There are more than a dozen companies that dispense and deliver medicines to patients with chronic conditions — hospital trusts select one or more from a panel of firms approved by NHS England. Patients can then choose their specific provider, but are limited to those their local trust uses.

Healthcare At Home is the country’s largest provider, delivering more than a million prescriptions annually to 200,000 patients, mainly to treat cancer and inflammatory conditions.

However, reviews of the company on the NHS Choices website since the beginning of October suggest Sarah is not the only customer dissatisfied with the service, and it receives only a one-and-a-half-star rating out of five.

One woman wrote: ‘My husband has aggressive RA [rheumatoid arthritis] and has now been without his medication for four months despite numerous phone calls.’

Another said: ‘Failed deliveries, no apologies, no explanations, impossible to get through on the phone.’

While a woman called Sue wrote: ‘Failed deliveries, inaccurate delivery times (despite text confirming the time). Impossible to get through on the phone, when you do they blame the consultants, i.e. no current prescription.

‘I have had to call to chase my delivery every time since April 17. My medication has had to be taken late every six weeks due to this. Appalling service and no response to my complaint email either!’

Good Health can reveal that Healthcare At Home has recently been under investigation by the General Pharmaceutical Council, which regulates pharmacists including home care providers (which are registered pharmacies). The results have not yet been made public.

This comes just three years after the company was investigated by the regulator over complaints about late and failed deliveries and patients having difficulties contacting the company.

An inspection revealed that Healthcare At Home was ‘insufficiently prepared’ for an increase in patients and changes to its distribution arrangements.

Yet the delivery system is inherently a good one, says Aileen Bryson, a pharmacist and practice and policy lead for the Royal Pharmaceutical Society.

‘These medicines are usually prescribed by specialist hospital services which arrange for suppliers to deliver medicines that might, for example, be injections for cancer, arthritis or specialist medicines for HIV, direct to patients. It makes it easier for patients because they can have treatments in their own homes rather than travelling to outpatient appointments.

‘When it is done properly, it is a win-win for everybody. However, medicines are not normal commodities; there are safety, confidentiality and storage concerns so they can’t be left with a neighbour like an Amazon package . . . or pushed through the letterbox where they could be eaten by a toddler or a pet.’

Healthcare At Home says it insists medication is signed for on delivery and that the patient’s name and address are checked before it is handed over. Patients can arrange for a nominated person to accept the delivery on their behalf.

There are standards to which these delivery companies must adhere, set by The Royal Pharmaceutical Society.

There are also supposed to be back-up plans in case something goes wrong, so that patients are not left without their medication, explains Aileen Bryson.

‘In general, the system works well. However, there is always the possibility of human error.’

Responding to unfavourable online comments, Healthcare At Home said it had a technical issue with its telephone systems in July and August.

‘We experienced a much higher volume of in-bound telephone calls, leading to some individual patients experiencing a much longer wait time at certain peak times in the day,’ it said online.

In Sarah’s case, it admits there were ‘human errors’, but says 96 per cent of its deliveries arrive on time. It claims part of the problem was that it hadn’t received Sarah’s prescription from the NHS hospital, despite requesting it 11 times over ten weeks.

However, when the firm had received and processed Sarah’s prescription, it still took another ten days to deliver it. And this is not the first time she has had problems with the company, which she has been using since 2009.

Sarah was left without her medication for four weeks over Christmas last year.

‘Last December, my dad waited in for my delivery as I had to go out. The driver called the house phone but Dad didn’t get to it in time, so the driver just left without knocking.’

With no medication, Sarah ended up having a painful flare-up during a trip to Chester with her husband, Stephen.

‘In total, I’ve had three instances of the delivery driver not knocking on the door,’ she says.

A spokeswoman for Healthcare At Home said that following the problems in 2014, more staff were recruited and a new CEO was appointed, but that Sarah’s case was unrelated to those issues.

She added: ‘Some delays can occur as a result of us waiting for prescriptions from referring centres, however in this case, we do recognise that we could have done more to avoid this situation from happening.’