A young pastry chef has revealed his recipe for mouthwatering garlic bread knots.

‘You ain’t had garlic bread till you’ve had my garlic knots,’ the 20-year-old chef said.

Morgan Hipworth, who opened his bakery at 14, revealed in a TikTok his latest recipe for ‘garlic knots’ a garlic infused cheesy goodness the whole family will love

Morgan begins by making tangzhong paste, a traditional Japanese water roux, by combining 35g bread flour, 60ml water and 85ml milk in a pan on medium. He stirs for four to five minutes then takes the pan off the heat.

He makes the knots in an electric mixing bowl with a dough hook by adding milk, yeast, bread flour, salt, caster sugar, eggs, an egg yolk, garlic, herbs, butter and the tangzhong paste.

He mixes the ingredients on low for 10 minutes then adds butter and mixes again for 2 minutes. In another bowl the same size as the one attached he sprays canola oil inside. 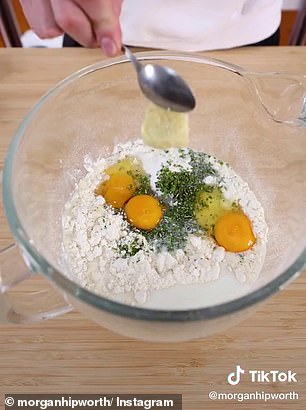 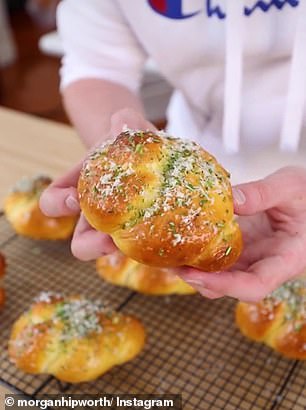 Whilst baking he melts the butter and places it into a bowl with garlic. Then separately combines salt, herbs, garlic powder and parmesan. He removes the knots from the oven and brushes them in melted butter and sprinkles over the salt mixture

He transfers the dough into the bowl and covers it with a tea towel, allowing it to rest for an hour and lines a baking tray with baking paper.

To a clean surface he sprinkles plain flour and divides the dough into 12 equal portions by rolling them into sausage shapes and tieing them into knots.

He places the dough onto baking paper with room in between each knot and puts them into a warm spot for an hour, then preheats the oven to 190°C.

In a bowl Morgan whisks together an egg with milk and once the dough proves brushes the egg wash onto the knots and bakes in the preheated oven for around 20 minutes.

Whilst baking he combines melted butter to a bowl with garlic then mixes in salt, herbs, garlic powder and parmesan. He removes the knots from the oven, brushes them in melted butter and sprinkles on herbed salt.

The young pastry chef sent foodies into another frenzy recently with his sponge cake recipe that’s cooked entirely in the microwave. 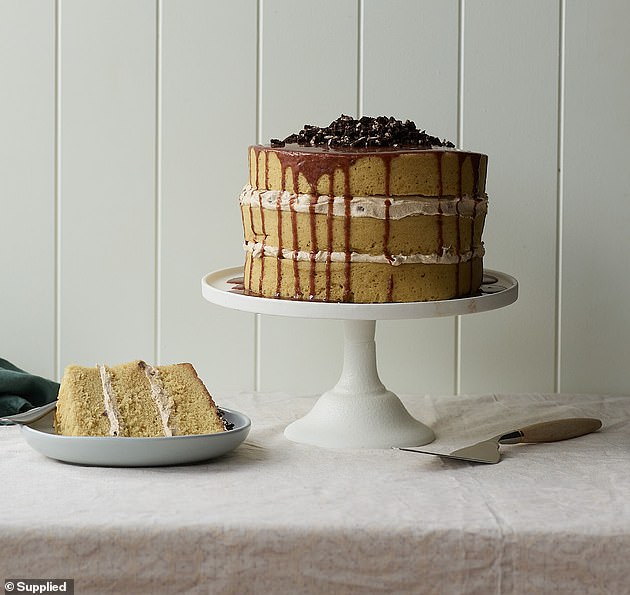 It looks professional, but Melbourne baker Morgan Hipworth makes this three-tier sponge cake in the microwave

He begins by mixing 500g of all-purpose flour with half a teaspoon of baking soda, 350g of caster sugar, 90g of brown sugar and a pinch of salt, then makes a well in the centre and adds 240g of melted butter, two eggs, 500ml of buttermilk and vanilla extract.

He whisks the mixture until it is smooth and all the ingredients are fully combined. Morgan divides the batter equally between three 15cm silicone cake tins, before cooking them one at a time in a microwave set to full power for three minutes. 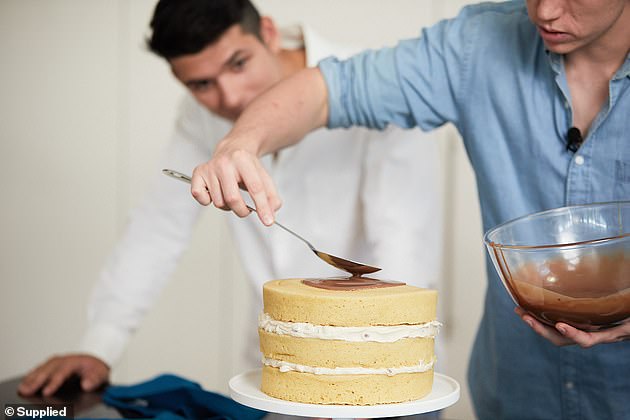 Morgan then pours 250ml of cream into a bowl and microwaves it on a high heat for two minutes before adding in 185g of chocolate and whisking until the two have combined.

He then removes the cake from the fridge and pours the ganache over the top, allowing it to drip down the sides for decoration. Morgan finishes the cake by adding four to five cookies, crushed and broken into different sized chunks.

He likens the dessert to an advanced version of the classic mug cake. No stranger to public praise, 20-year-old Morgan has been over achieving for most of his life. 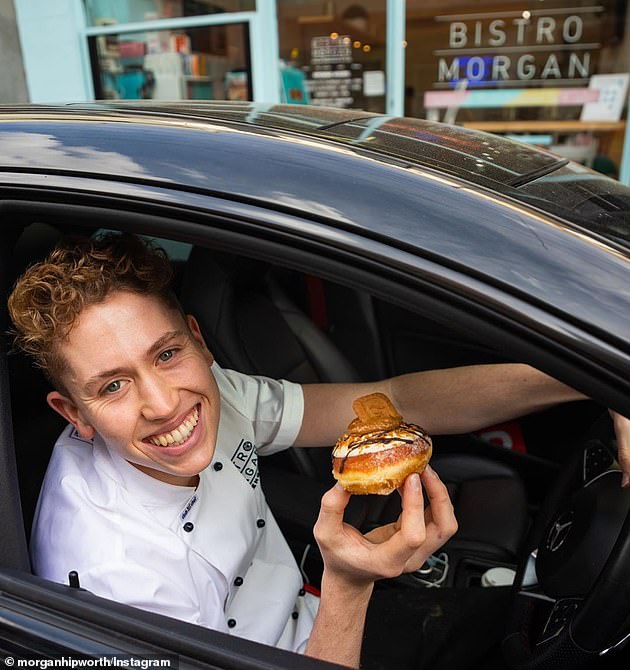 Morgan Hipworth (pictured) has been described as a ‘one-in-a-million star’ by Instagram CE0, Kevin Systrom

One year before opening his bakery in 2016, the then 14-year-old was busy supplying his signature doughnuts to 15 Melbourne cafes on weekends.

His flavour creations included a Gaytime Crunch inspired by the popular ice cream, Coco Pops, Lotus Biscoff and Red Velvet, all of which he stocks at Bistro Morgan today.

The hard-working youngster was once hailed as a ‘one-in-a-million star’ by Instagram co-founder Kevin Systrom, who said ‘it’s because of entrepreneurs like Morgan’ that the photo-sharing platform has become so successful.

1. In a large bowl, combine all the dry ingredients and whisk until combined. Make a well in the centre and add the remaining ingredients. Whisk until smooth and combined.

2. Divide the batter equally amongst the three 15cm silicone cake tins. One at a time microwave the cakes on full power for 3 minutes. Remove from the oven and allow to sit until completely cooled.

3. In the bowl of an electric mixer fitted with the paddle attachment combine the butter and brown sugar and cream until light and fluffy. Add the icing sugar & toasted flour and mix on high speed for 2 minutes, add the milk and whip for a further minute on high speed. Add the chocolate chips and stir to combine.

4. Assemble the cake on the serving platter starting with the bottom layer, a 1/3 of the frosting then repeat with the remaining layers. Place in the fridge whilst you make the ganache.

5. Place the cream into a microwave safe bowl and microwave for 2 minutes on high heat, add the chocolate and whisk until combined and smooth.

6. Remove the cake from the fridge and pour the ganache over the top of the cake and allow to drip down the sides, top with the crushed biscuits.