The Personal History Of David Copperfield review: ‘An unbridled joy’

As nomination season for the big film awards comes to a close, it is clear there are both winners – basically Joker, 1917, The Irishman and Once Upon A Time In Hollywood – and losers.

Unfortunately, Armando Iannucci’s The Personal History Of David Copperfield finds itself in the latter camp, having picked up no major nominations at all in America and only one Bafta nod here at home, where a major Dickens adaptation might reasonably expect to do better.

But please do not let that put you off, because this is an unbridled joy that will surely brighten the cold winter weeks that lie ahead. Yes, Iannucci and his regular collaborator Simon Blackwell (they worked together on In The Loop, The Thick Of It and Veep) have played fast and loose with Dickens’s much-loved plot. 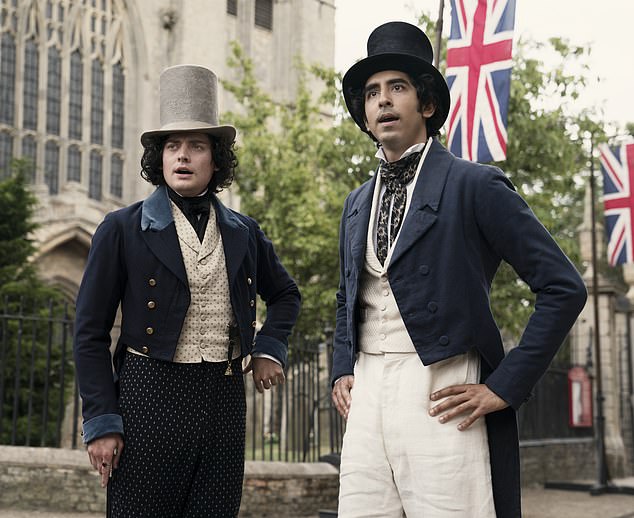 Characters are combined, exiles either shortened or cancelled altogether and some sadnesses and tragedies never happen at all. But the end result – which I’ve seen twice now – is just delicious, packed through with energy, intelligence and a deeply touching good humour. Literary purists may wince but it’s clear the pair hold the great English novelist in the very highest regard.

The one Bafta nomination the film has received (Best Casting for Sarah Crowe) is richly deserved – the film is packed with wonderful performances – but not without controversy too. For in a year when Bafta has so conspicuously failed to nominate a single black or Asian actor or actress for an award, this new version of David Copperfield positively revels in the ethnic diversity of its fine cast.

There’s a moment when David, the lovely Agnes and her drunken father, Mr Wickfield, are on screen together – and you realise that all three characters are being played, rather brilliantly, by performers of three different ethnicities – that is just wonderful. Casting is rarely singled out for mention but this thoroughly 21st-century example is right out of the top drawer. 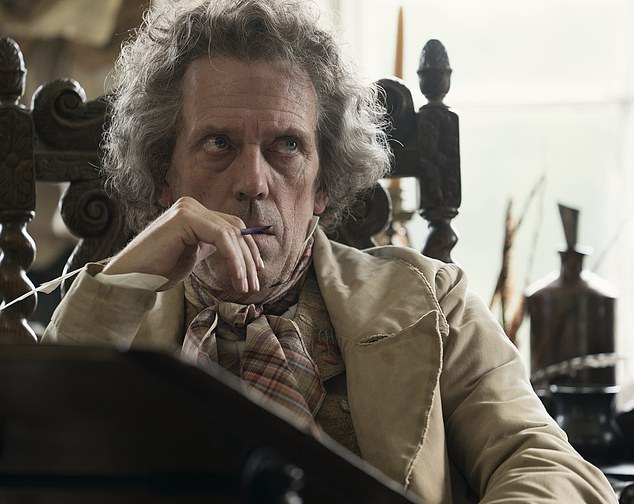 Dev Patel – he of Slumdog Millionaire and The Best Exotic Marigold Hotel fame – leads the consistently classy way, exuding openness, optimism and an underlying kindness that makes him a hugely engaging Copperfield.

Mind you, he’s helped considerably by Jairaj Varsani, who is fabulous as the younger David and first demonstrates the character’s passion for words – he scribbles phrases he particularly likes on scraps of paper that he keeps in a wooden box – that will one day lead to him becoming a writer. Just as with the semi-autobiographical novel, this is a film where you’re never quite sure where David Copperfield ends and Charles Dickens begins.

But in a production that bounces along with an infectious vitality and the sort of surreal visual touches that could have come straight out of Monty Python (look out for the giant hand smashing through the roof of Peggotty’s brother’s upside-down houseboat), there are lovely performances everywhere. 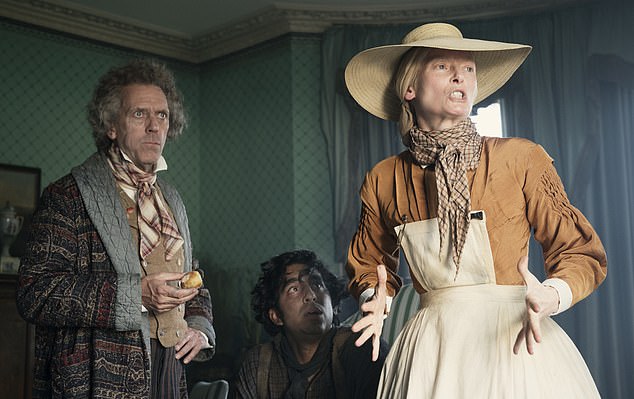 In fact, there are lovely performances everywhere: Tilda Swinton demonstrates her talent for comedy as Betsey Trotwood (above) while Peter Capaldi is one of the best Micawbers ever

Hugh Laurie is a befuddled delight as the constantly distracted Mr Dick (he can’t get King Charles I off his mind) and Tilda Swinton demonstrates her talent for comedy as the donkey-phobic Betsey Trotwood, while Peter Capaldi is quite simply one of the best Micawbers I’ve ever seen.

In a film packed full of fun (but possibly not enough sadness for Dickens devotees) the acclaim goes on and on – Ben Whishaw as the ever-so-’umble Uriah Heep, Daisy May Cooper as Peggotty, Rosalind Eleazar as Agnes, Benedict Wong as Wickfield and Morfydd Clark as the gloriously dim and yet ultimately heartbreaking Dora. All fabulous.

It’s certainly not Dickens as we know it, but the great man would definitely approve.

There’s nothing worse than a film that plucks cinematic failure from the jaws of commercial success, but that’s what’s happened here. Which is a shame as, until the disastrous last ten minutes or so, this watchable reworking of Henry James’s classic chiller The Turn Of The Screw has a lot going for it.

With James’s basic plot retained but its setting updated to the mid-1990s, the Terminator: Dark Fate star Mackenzie Davis does a good job of convincing as the young woman hired as a governess at a remote country house; Finn Wolfhard, of The Goldfinch and Stranger Things fame, introduces a disconcerting sexual undercurrent to the spooky goings-on as the older of her two charges; and Barbara Marten is iciness personified as the unbending housekeeper, Mrs Grose. 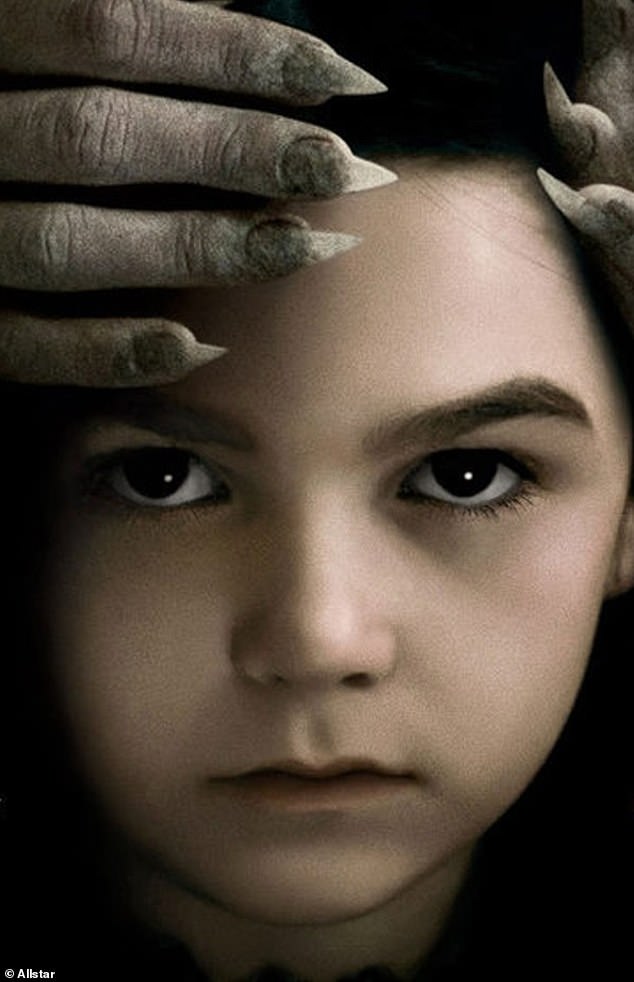 The Turning is a reworking of Henry James’s classic chiller The Turn Of The Screw which sadly plucks cinematic failure from the jaws of commercial success. Above: Brooklynn Prince

As Davis wanders prettily but ever more nervously through the spooky corridors, the Italian director Floria Sigismondi seems to have a modest success on her hands, despite one or two distinctly heavy-handed touches and an obvious over-abundance of broken china dolls.

But then, presumably in a misguided attempt to replicate James’s own unresolved ending, Sigismondi serves up a succession of climactic scenes that will leave most people scratching their head and stumbling grumpily out into the street in frustration.

If the title sounds familiar, it should, given that this is a little-awaited sequel to a 2004 film starring Sarah Michelle Gellar, which itself was a remake of a 2002 Japanese horror film, Ju-On.

And, fair dos, Nicolas Pesce’s co-written screenplay acknowledges both, as a frightened American woman flees the cursed house in Tokyo and returns to her family in America. Of course, the curse has come with her. 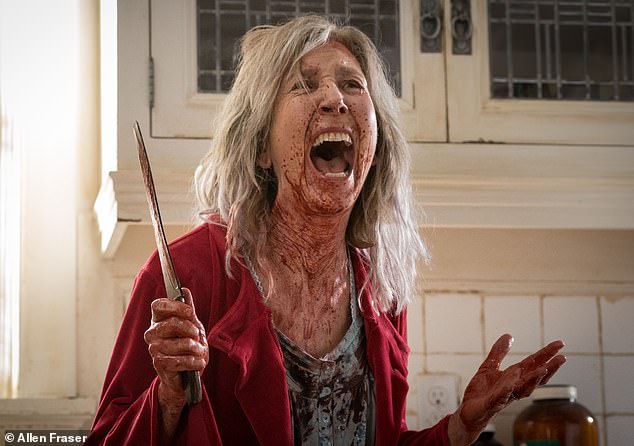 This is a little-awaited sequel to the 2004 horror starring Sarah Michelle Gellar which springs few real surprises and it’s hard to keep up with all the nastiness unfolding. Above: Lin Shaye

The British actress Andrea Riseborough is unlikely casting as an American police detective restarting her career after the death of her husband, and it’s hard to keep up with the nastiness unfolding in at least three different timelines.

But while it springs few real surprises, the film probably delivers sufficient jump-scares for a young audience, despite a rather predictable ending.