The picture of an Aldi bag that’s rocking the Labor party: Why this image of a group of young activists holding up a pink supermarket bag has been branded ‘tone deaf, gross and disrespectful’

Young Labor Party members have come under fire for an ‘insensitive and disrespectful’ photo showing the group posing with an Aldi shopping bag.

Annika Rees, who was at the Australian Young Labor National Conference in Canberra at the weekend, posted the photo to social media showing her holding the bag while posing with 17 other members.

The bag was a reference to allegations billionaire and banned donor Huang Xiangmo handed $100,000 cash in a plastic Aldi shopping bag to NSW Labor’s then-general secretary Jamie Clements at a dinner in 2015.

Ms Rees quickly deleted the post due to it’s ‘insensitivity’ amid the ongoing Independent Commission Against Corruption (ICAC) inquiry into alleged illegal donations.

‘The photo I posted was a tone-deaf attempt at being funny, but I understand the insensitivity of the situation that I strode to make light of,’ she told The Australian.

Annika Rees, who was at the Australian Young Labor National Conference, posed for a photo with 17 other members while holding a pink Aldi bag

‘I didn’t think about what I was doing when I held the bag up, and I didn’t talk to anyone else about it, and I apologise for posting it.’

A NSW Labor staffer told the publication the post was ‘gross, insensitive and disrespectful’.

The money was registered as a series of $5000 donations to NSW Labor and Country Labor by 12 donors, most of whom were associated with CFL convenor Jonathan Yee, the inquiry heard.

Ernest Wong, a former Labor MP, told the hearing the the cash was raised during a fundraising dinner and was delivered personally by Mr Huang.

ICAC is examining whether Mr Huang – who is now banned from Australia – was the true source of the $100,000 said to have been raised at the dinner. 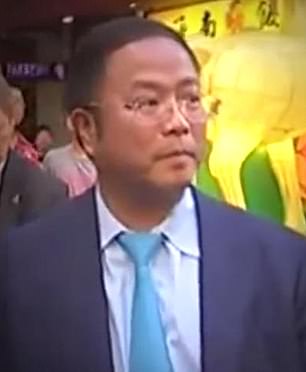 The bag was a reference to allegations billionaire and banned donor Huang Xiangmo (pictured) allegedly handed $100,000 cash in a plastic Aldi shopping bag to NSW Labor’s then-general secretary Jamie Clements at a dinner in 2015

As a property developer, Mr Huang was prohibited by law from making donations to NSW political parties.

The party has since forfeited the $100,000 donation after the inquiry heard ‘alternative facts and nonsense’ had been put forward in an attempt to hide the true source of the money.

The lawyer representing the party at the Independent Commission Against Corruption inquiry on Wednesday said NSW Labor forfeited the donation on September 13 following evidence given to the ICAC.

‘It is apparent that the party cannot be satisfied upon any view at all that the persons who it is alleged made the donation at the dinner on March 12, 2015, were the true donors,’ Arthur Moses SC told the inquiry on Wednesday.

‘There have been a lot of … alternative facts and nonsense put forward in this inquiry in order to hide the true source of donations.

‘The ALP accepts that this is a matter that should not have been allowed to get to this stage.’

He said the funds have been sent to the NSW Electoral Commission along with amended donation disclosure forms.

The $100,000 will now go to NSW Treasury Consolidated Fund, which contains all money collected, received or held on behalf of the state.