The plight of white working class boys is a ‘taboo subject’ in Westminster, where their poor school results are ignored, says Tory MP Ben Bradley.

Mr Bradley today told the Commons that modern society is ignoring the plight of white males from disadvantaged backgrounds.

He questioned why there is not the same outcry about academic under-performance in those communities in the way the Mansfield MP says there would be for others. 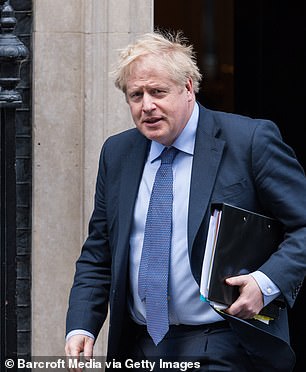 ‘Imagine the legitimate public outcry there would be if a set of statistics showed that disadvantaged black boys or Asian girls were way behind their white counterparts at school. Heads would roll,’ he wrote on Politics Home.

‘Yet this is precisely what is happening to white boys from disadvantaged backgrounds, and modern society is ignoring their plight.’

Mr Bradley says that white boys from poorer backgrounds are faring worse than any other race or ethnicity of boys.

Citing Boris Johnson’s crushing of Labour’s traditional support base in the north and midlands at the general election, he said that now the Tories have broken the ‘Red Wall’, they must also defeat prejudices that have sent white working class boys to the bottom of the pile.

But he also said that the subject remains a taboo in Parliament and challenged those politicians who talk about ‘white privilege’ to come to his constituency, where he said ex-coal miners who kept the country’s lights on are now dying early of lung disease from their jobs.

Mr Bradley has argued for a ‘Blue Collar’ Conservatism and said that it should not be taboo to mention the fact that the race and background of the boys in question are causing them to miss out.