The police states:  Victoria and Queensland hand out $800,000 worth of fines in 24 hours

Australians are still ignoring COVID-19 restrictions, with more than $800,000 worth of fines being handed out across the country in just a 24-hour period.

Police officers are out in force this weekend to crack down on social distancing offenders during the Easter holiday.

Most seem to have heeded the advice of the government, with usually-busy holiday spots being largely empty.

But in Victoria and Queensland alone, more than 580 infringements were issued to residents found blatantly breaching public health orders.

A man is handcuffed on Bondi Beach on Saturday morning 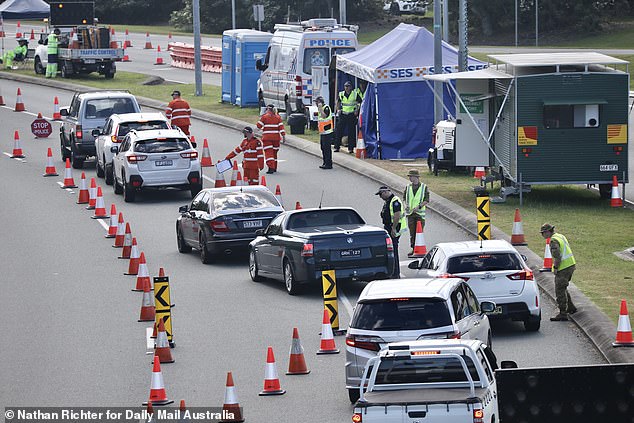 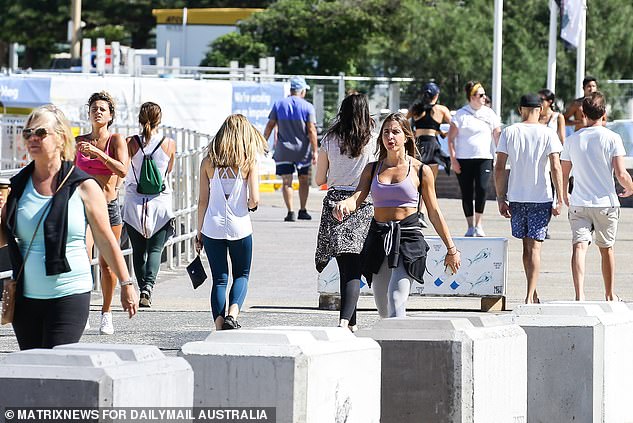 COVID-19 rules vary from state to state, but the general advice has been for Australians not to leave their homes unless it is absolutely necessary 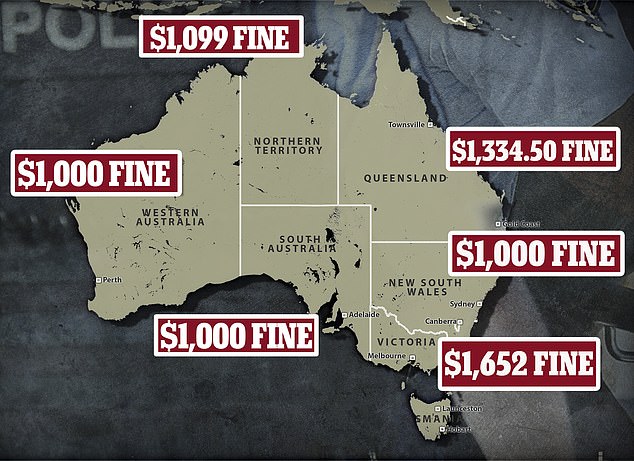 Victoria police confirmed 183 people were slapped with a $1,652 fine for breaching public health orders in the 24 hours to 11am on Saturday.

Among those fined were four women caught partying at a short-term rental property and seven mates drinking at a schoolyard.

Multiple people were fined over gatherings at their homes.

A five-day operation is underway to enforce safety on the state’s roads over Easter and have the added task of nabbing non-essential travellers.

COVID-19 rules vary from state to state, but the general advice for all Australians has been to not leave their homes unless it is for essential travel, including to buy food and to exercise. 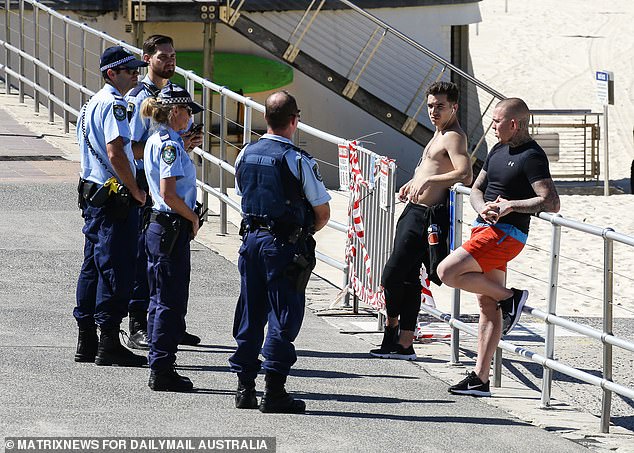 Police officers are out in force this weekend to crack down on social distancing offenders during the Easter holiday (pictured: officers speaking to bystanders) 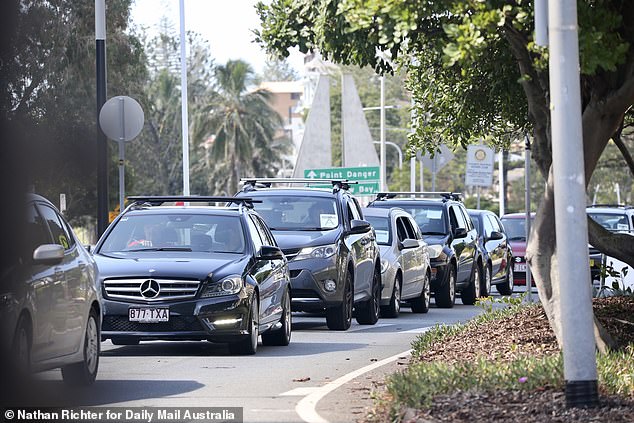 Queenslanders entering the state must have an amber or red pass, the latter indicating they are returning from one of the 13 COVID-19 hot spots declared by the state government

The crack down has extended to other parts of the country, with fears city residents are using the Easter break to travel to rural communities.

In Queensland, more than 400 fines for coronavirus-related offences were handed out, raking in more than half a million dollars for the state government.

Police Commissioner Katarina Carroll said the majority of people had been compliant and officers took people on their word and also showed compassion before issuing a $1,334 fine.

‘However, we have issued over 400 penalty infringement notices,’ Ms Carroll said on Saturday.

‘Most people are doing the right thing, but if there is blatant disregard, and there has been many examples of that, people will be issued with an infringement notice.’

Not only are police busy handing out fines, they are also patrolling the NSW-Queensland border and vehicles travelling southbound on the M1 to the Gold Coast after tighter restrictions came into force overnight.

The new 14-day isolation period for Queenslanders means those returning to the state will require a new pass and exemptions to strict coronavirus regulations to get home. 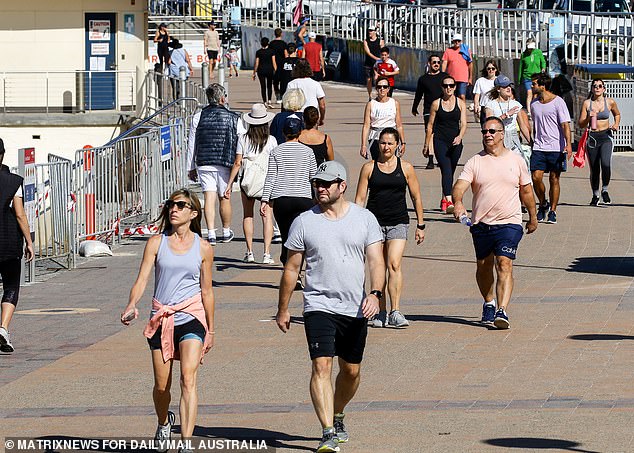 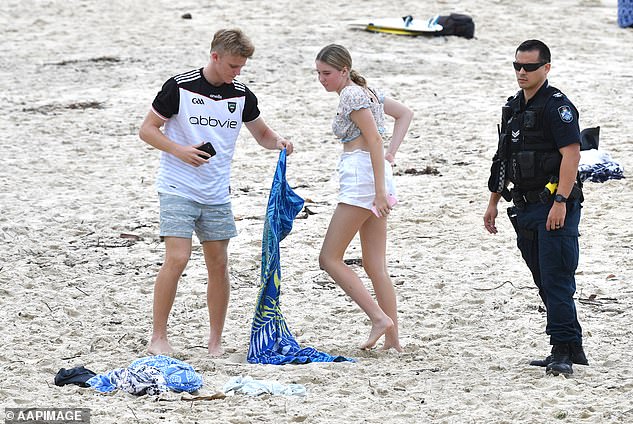 A Queensland Policeman (right) is seen moving people on from the beach at Burleigh Heads on the Gold Coast, Friday, April 10

Previous passes issued by the state government have been voided.

Queenslanders entering the state must have an amber or red pass, the latter indicating they are returning from one of the 13 COVID-19 hot spots declared by the state government.

‘There has been a dramatic change and every individual must have a pass,’ Ms Carroll said.

‘If you have a red pass, as has happened to two people, you will be put into self-isolation.’

She said from her experience, having driven past the Gold Coast beachfront this morning, people were adhering to social distancing rules.

Three beaches were closed on the Gold Coast, at Coolangatta, The Spit and Surfers Paradise, and they were being policed both physically and through the use of drones.

‘People are out there going for a swim or having that walk but we are not seeing people loitering, lingering or hanging around in groups,’ she said

Gold Coast District’s Chief Superintendent Mark Wheeler said they had intercepted 200 vehicles over the past couple of days heading south on the M1.

‘We have been very targeted with our interceptions … and we have had to turn 11 vehicles around containing 19 people. They had no reason to be travelling to the Gold Coast,’ Mr Wheeler said.

‘No infringement notices have been issued.’

Meanwhile in New South Wales, Police Deputy Commissioner Gary Worboys confirmed on Friday that almost 50 residents across the state had been slapped with a $1,000 fine.

Mr Worboys said while most people in NSW were following the rules, it was disappointing to issue $50,000 worth of fines. 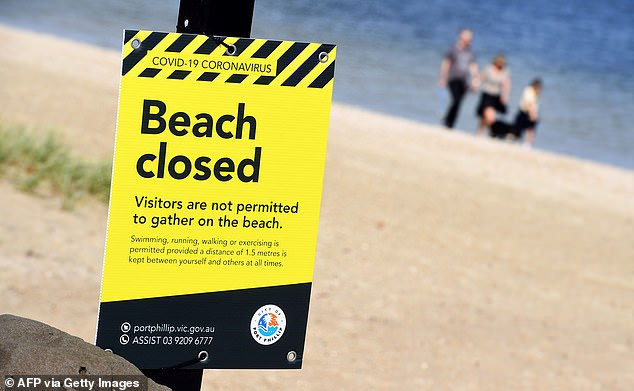 ‘Here we are at the start of Easter. Right around this state, police are reporting that there’s a good deal of consideration and compliance with those requests around not travelling, social distancing,’ he said on Friday.

‘But it’s also disappointing, in the same time, to say that in the last 24 hours nearly 50 people have been issued infringement notices for $1,000.

‘Those people who just failed to get the severity of the situation that we face in these last few months and days.’

Police in Western Australia have also been ordered to issue on-the-spot fines to people ignoring social distancing, with photos emerging of packed beaches on Good Friday.

WA Police praised beachgoers who hit the waves and were mindful of social distancing measures.

‘The overwhelming majority of people attending the beaches were consciously following the advice about maintaining appropriate distances,’ they said in a statement.