The Polish fighter pilots who helped save Britain in WWII

Anybody who has spent time on a film set will know that the word ‘wrap’, shouted at the end of a day’s filming, invariably signals a scramble for the exit. But it wasn’t like that at White Waltham aerodrome in Berkshire last autumn when filming was under way for the new Second World War film Hurricane. Instead of the usual sprint for the doors, the entire crew would gather to watch the star of the film head serenely off to her temporary lodgings.

‘Before doing their own thing, everyone would just wait to watch her go,’ says Simon O’Connell, the film’s aerial coordinator. ‘I’d never seen anything like it. They’d just quietly stand there in total awe. Which is pretty amazing as she is over 80 years old.’

The star in question was a magnificent Hawker Hurricane fighter, a surviving stalwart of the Battle of Britain and painstakingly reconstructed over several years by Anglia Aircraft Restoration. ‘We’d spent the week before she arrived filming around a full-sized replica of a Hurricane,’ recalls the film’s director, David Blair. ‘When we saw the real thing we realised it had been like working with a stuffed parrot. Suddenly we were confronted with this incredible piece of machinery. She was just wonderful.’

The star of the film is the Hawker Hurricane fighter, a surviving stalwart of the Battle of Britain and painstakingly reconstructed over several years by Anglia Aircraft Restoration

The Hurricane may be the unquestioned star of the picture but at its heart, the story is a human one. This is the true tale of the RAF’s hastily assembled No.303 (Polish) Fighter Squadron. Put together in the summer of 1940, as Britain faced the most concerted military threat in its history, this was a unit made up almost exclusively of Polish airmen. After failing to stop the Nazis overwhelm their homeland, about 150 Polish pilots (in 303 and 302 Squadron) and ground crew made their way across the Channel in order to continue their war. Initially they were treated with scepticism, but as the shortage of experienced British airmen became critical, they were soon corralled into frontline duty and supplied with Hurricanes.

‘I had no idea about their story,’ says Iwan Rheon, who plays Jan Zumbach, a devil-may-care Polish adventurer who ended up, after the war was over, flying as an aerial mercenary in Africa. ‘At school what we learned of the Second World War was all about D-Day and Dunkirk. So it was really fascinating to discover what these guys did. Their contribution was nothing short of miraculous. The fact is they helped to save Britain.’

Rheon is not exaggerating. 303 Squadron turned out to be among the most productive flying units in the RAF, responsible for downing some 126 Luftwaffe aircraft in just six weeks during the Battle of Britain. Zumbach alone was responsible for eight confirmed German kills and one probable.

‘The incredible thing about Zumbach was he didn’t need to be there,’ says Rheon, best known for his role as Ramsay Bolton in Game of Thrones. ‘He had a Swiss passport, he could have gone to a neutral country and sat out the war. But he got himself to England and deliberately sought out battle.’

As Witod Urbanowicz, the most senior of the Polish pilots, played in the film by Marcin Dorocinski, puts it: ‘We don’t beg for freedom, we fight for it.’ 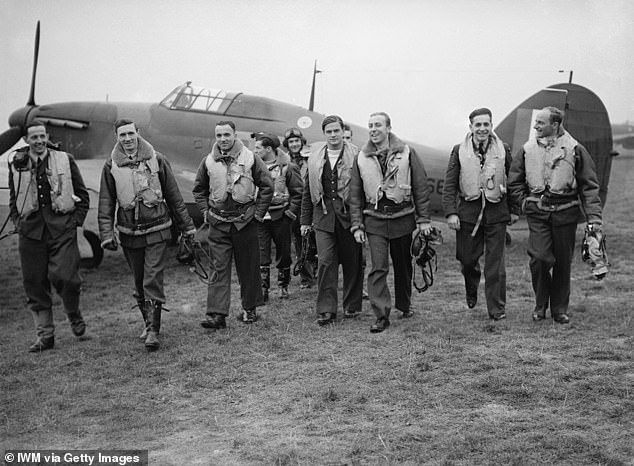 303 Squadron turned out to be among the most productive flying units in the RAF, responsible for downing some 126 Luftwaffe aircraft in just six weeks during the Battle of Britain

To assimilate the role of Zumbach, Rheon, who grew up speaking Welsh, was obliged to learn another language: Polish. Well, almost.

‘I’m bilingual, which is supposed to make new languages easier,’ he smiles. ‘But there’s very little connection with English or Welsh, so little to grasp on to. In the end I didn’t learn it, I just learned the lines.’

The insistence on Polish was part of Blair’s search for authenticity. Speaking in broken English among themselves, he reckoned, would not sufficiently communicate a sense of how these foreigners were set apart from British life. Not least by the man who was put in command of the squadron, a Canadian pilot named Johnny Kent, played in the film by Milo Gibson, son of Mel. ‘Reading up about the guy there’s no doubt he was initially very apprehensive about taking on a bunch of Poles,’ says Gibson, the star of Hackshaw Ridge. ‘But as he got to know the guys, as he realised the struggle they had come from, and as he saw them in action, he began to grow in appreciation. He came to call them his brothers.’

At the heart of Blair’s quest for truth was his venerable lead: the Hurricane itself. The aircraft used in the film was on its first sortie after being freshly restored. This was not a cheap operation: the three arms of the propeller alone cost £20,000 apiece.

When it was on set, the plane was filmed constantly by helicopters, tracked by drones or recorded in flight by other aircraft. On the ground it was under relentless scrutiny from lens and microphone. ‘Just once one morning, a bit like most 80-year-olds tend to do, she was reluctant to start first thing,’ he says. ‘Other than that she was a real trouper.’

She needed to be. A huge amount of footage had to be accrued because this was the only Hurricane the film-makers had at their disposal. ‘We wanted to do everything as authentically as possible,’ explains Blair. ‘Unfortunately, there was only one plane available, so we couldn’t fly it in formation or start destroying it in a dog fight. Instead we fed the footage we had into special effects software.’

Ultimately though, all of those involved in the film are anxious that it is the pilots rather than the plane that are memorable. In a prescient echo of current times, of the Windrush scandal and the Brexit fallout, it is what happened to the Poles after the war was won that, from a British perspective, is the least distinguished part of their story. 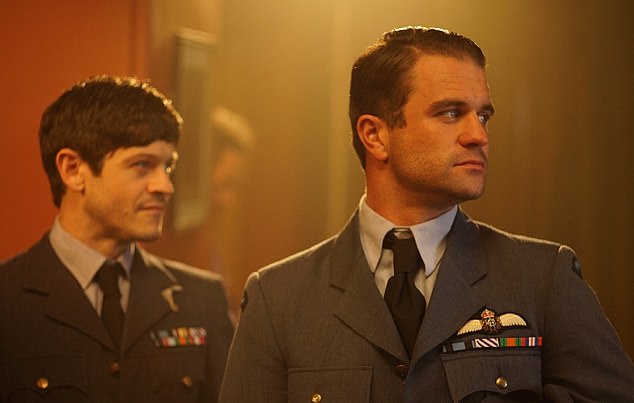 Iwan Rheon and Milo Gibson in Hurricane. After the war the courage of the Polish pilots went unrecognised, both at home and in Britain

‘One thing that blew my mind was that the Polish airmen were not allowed to march in the victory parade on VE Day,’ says Gibson. ‘These were men whose bravery had helped save Britain and here they were being told, now they’d done their job, they weren’t wanted. And it wasn’t just that they weren’t recognised for what they did, at the end of the war a lot of them were told to leave. When they went back to Poland, they were regarded as traitors, ill-treated, some were even executed. These are heroes who went completely unnoticed.’

Until now. And, like the amazing aircraft they flew, it is high time they were remembered.

‘Hurricane’ will be released in cinemas and on Rakuten TV from September 7, uk.rakuten.tv