The power behind the ‘baby-faced assassin’ Ole Gunnar Solskjaer

New Manchester United manager Ole Gunnar Solskjaer is a man so committed to football that he even met his future wife while playing the beautiful game.

The 45-year-old Red Devils legend first spotted Silje when they were football training as youngsters at Clausenengen Fotballklubb in his native Kristiansund, Norway.

Now there are questions over whether she will return to Manchester with her three children who are happily living in Norway, where Solskjaer was managing Molde FK.

Solskjaer, who met Silje as children across the centre circle, confided that he carried on playing with a younger age group in the hopes of getting to know her better.

And his move paid off, because they got together in 1992 – and, after they went their separate ways to complete national service, they married in Florida in 2004.

The duo – who now have three children: 18-year-old Noah, 15-year-old Karna and ten-year-old Elijah – have lived in Britain twice before thanks to his football career.

They resided in Bramhall, near Stockport, while he played as United between 1996 and 2007, and in South Wales when he managed Cardiff for nine months in 2014. 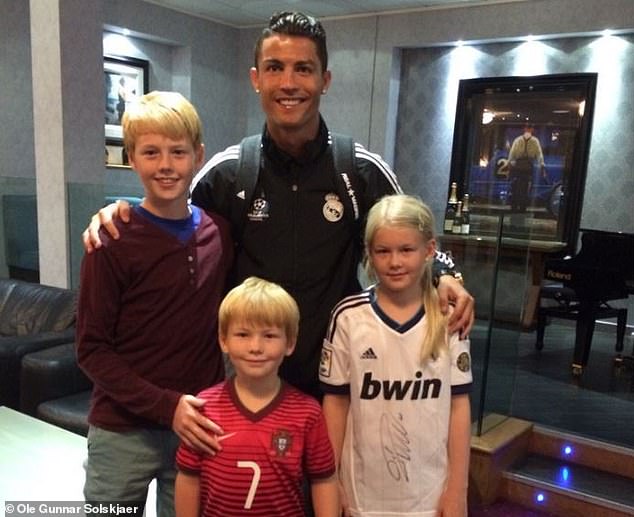 The Solskjaers have three children – Noah (left), 18, Karna (right), 15, and Elijah (centre), ten – who are pictured with former Real Madrid footballer Ronaldo in a photo tweeted in June 2017 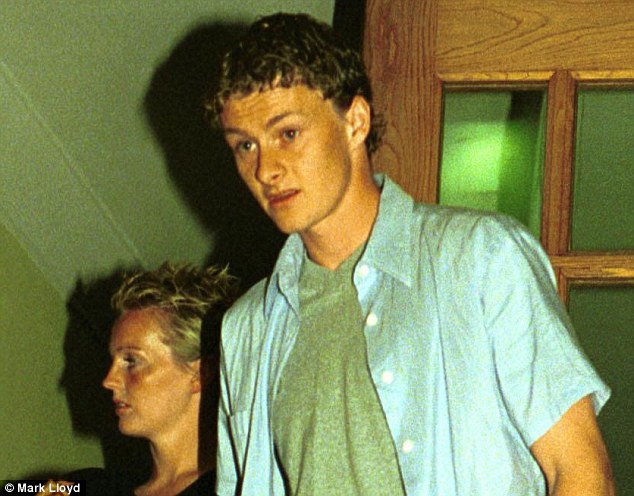 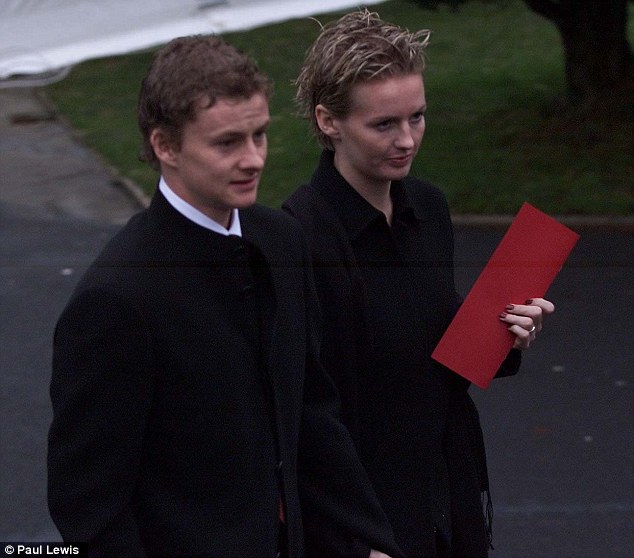 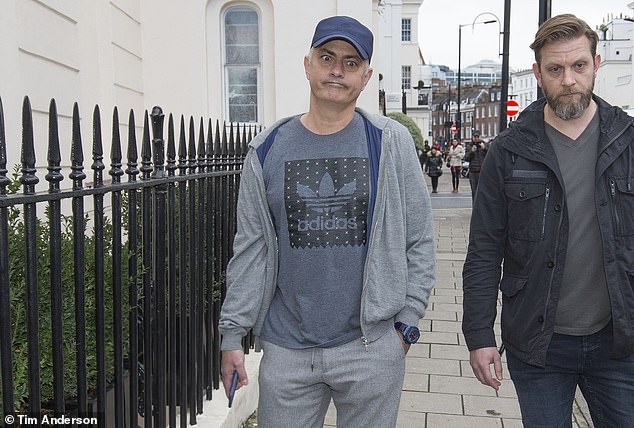 Solskjaer is taking over from Mourinho, who was pictured outside his home in London today

Speaking to Dagbladet magazine in 2015, Solskjaer said of his wife: ‘Silje was also a very good football player. We often trained together when we were younger.

‘In Clausenengen we had a talent group in the morning that I really was too old to, but I was allowed to be with anyway. Actually, I would just because Silje was.’

Silje’s brother Ole Lyngvaer was also a footballer and scored twice in a Norwegian Cup semi-final in 1990. Solskjaer gave him a job Cardiff’s youth academy in 2014.

Solskjaer – who had been in his second stint in charge of Molde in Norway – will now be United’s caretaker manager until the end of the season after Jose Mourinho’s exit.

He managed in the Premier League with Cardiff in 2014, but that went badly with him failing to save them from relegation before he was axed the following September.

Silje has followed him around Europe for his football, and they moved with their family to a £400,000 home just outside the Welsh capital when he was at Cardiff. 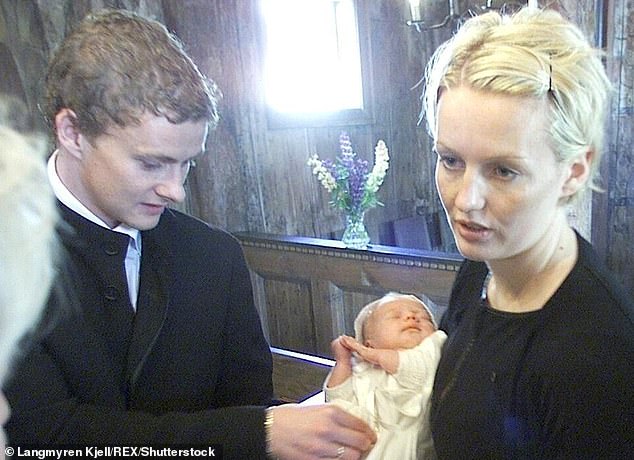 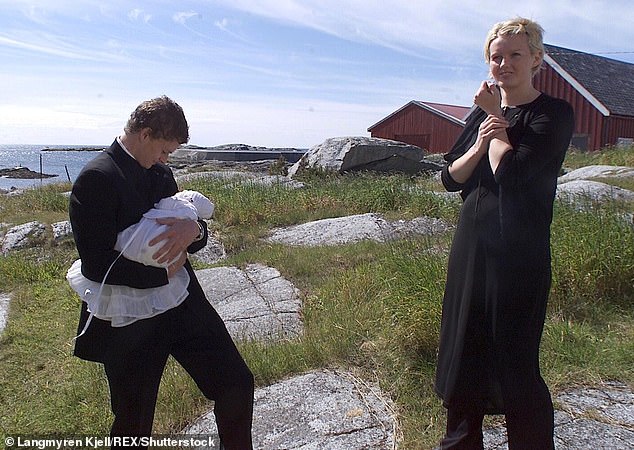 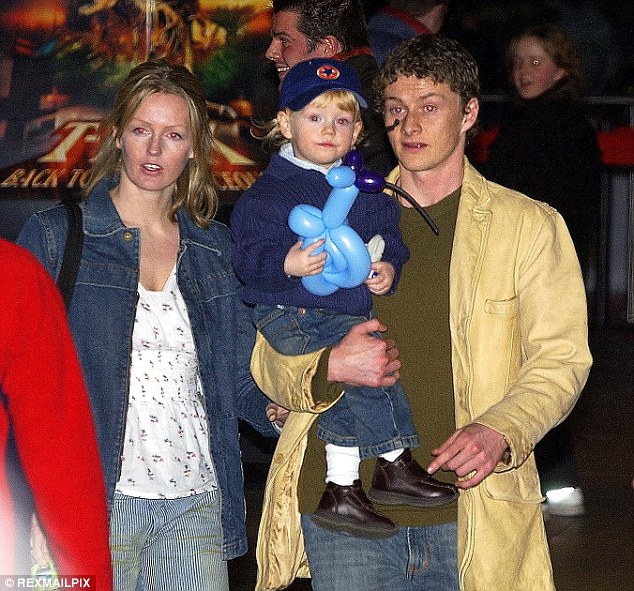 Solskjaer with his wife Silje and son Noah leaving the UCI Filmworks in Manchester after the third birthday party of Brooklyn, son of his fellow United player David Beckham, in March 2002 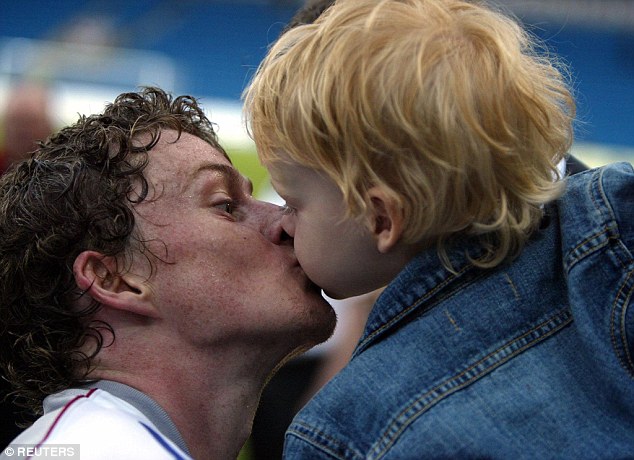 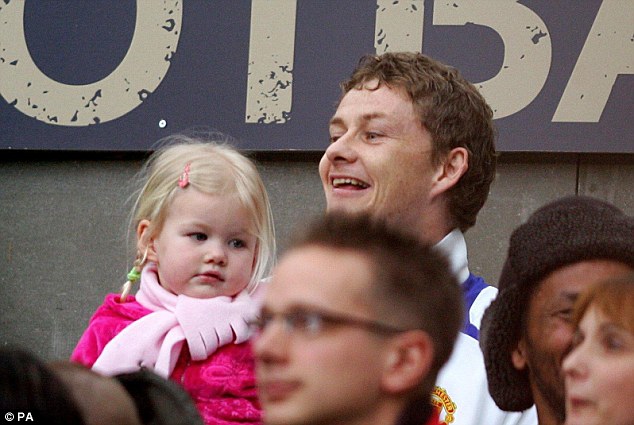 Speaking about their arrival at the time, he said: ‘It means you relax more and think less football when you have family around you. When you are alone, you have nothing else apart from video chat with them to keep you going.’

But they returned to his homeland of Norway in 2015 when he rejoined Molde, with Solskjaer saying the move was for the sake of their three children.

He told Dagbladet at the time: ‘It had a lot to say. The kids get a different upbringing here than they would have had in Manchester or Cardiff.’

Solskjaer added: ‘It has been very nice to see how the kids have it at home. It’s an upbringing I and Silje have had both, and that was the main reason we moved home.’

He said that in Britain, his sons had to travel by car for half an hour to get to school, while back in Norway they were only five minutes away from school and friends.

Solskjaer continued: ‘Now friends and buddies come and knock on the door. It’s really impossible to put any price and words on how important that value is.’ 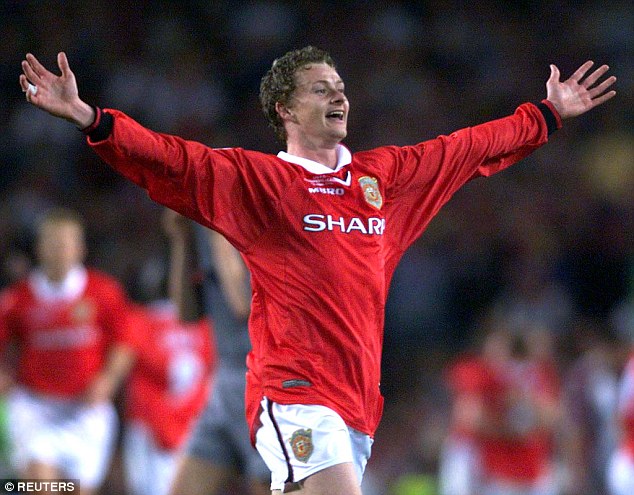 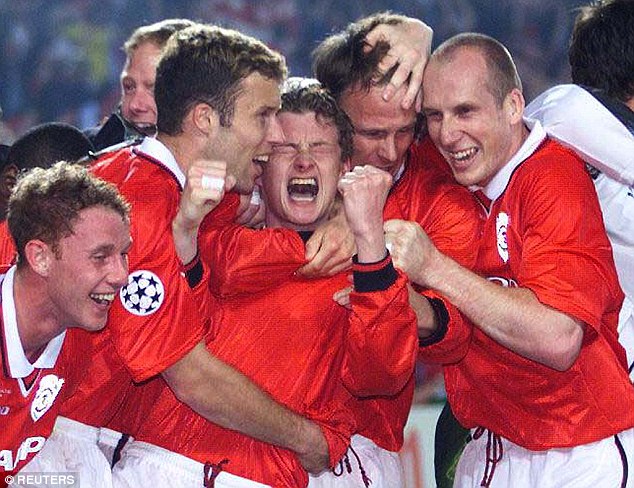 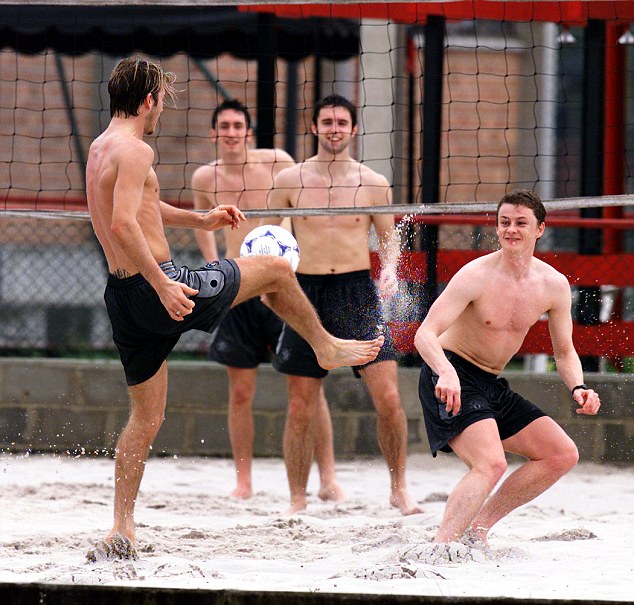 Solskjaer and other Manchester United players including David Beckham enjoy a game of beach volleyball in Rio de Janeiro, Brazil, before the World Club Championship in 2000 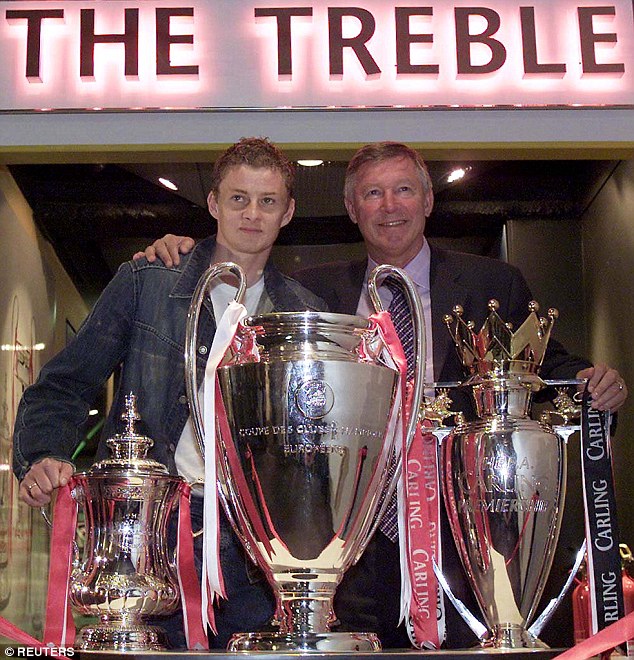 His sons have also taken up his interest in football, although Noah is said to have preferred Wayne Rooney to his father as his favourite player.

In 2010, he was said to have bought the most expensive property in his hometown of Kristiansund – a £1million seafront mansion with an outdoor swimming pool.

Now, Solskjaer is the man the United hierarchy have turned to as the club bid to make up lost ground on the Premier League’s top four.

However, speaking as recently April 2017, he had told Dagbladet that he wanted to stay in Norway, saying: ‘I’ve changed since I was Molde coach.

‘Last time I was a young and ambitious Molde coach who had a dream to move on to the Premier League. Now I may have changed my mind. 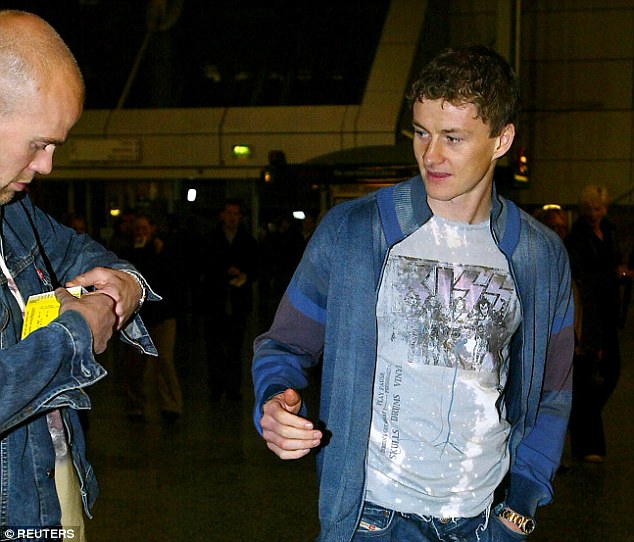 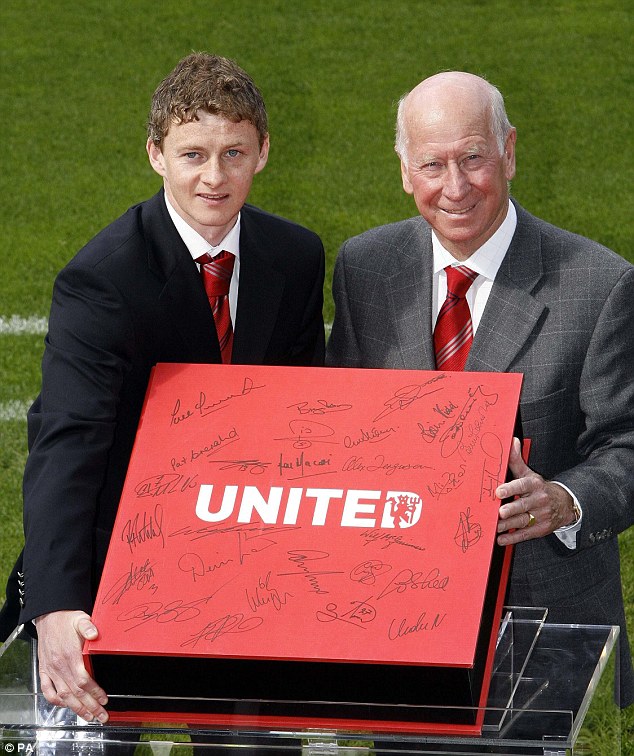 Sir Bobby Charlton (right) and Solskjaer with Manchester United’s Opus Book of History at Old Trafford in April 2006. The book is one metre square, signed by past and present stars 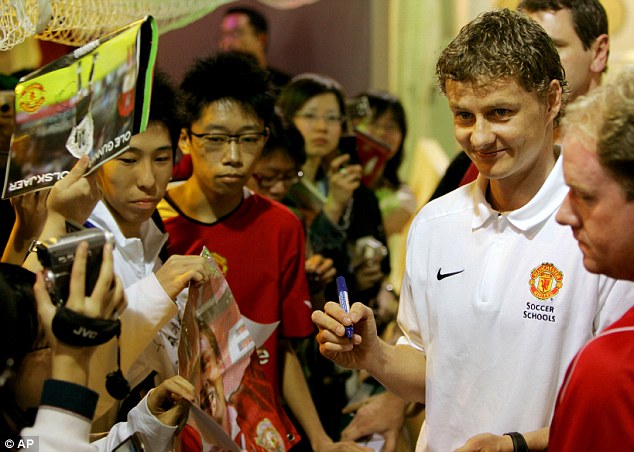 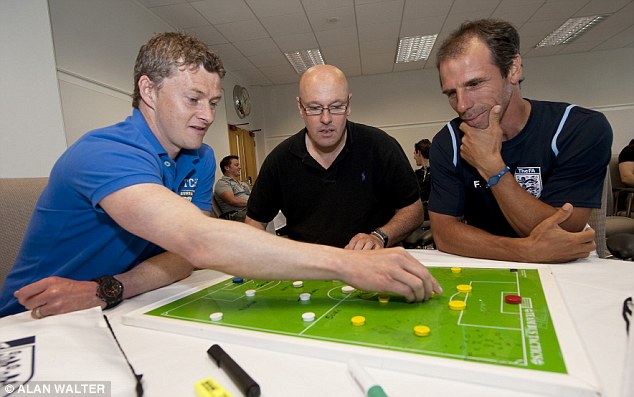 ‘Now I’m not dreaming about the Premier League anymore. I want to do the best in Molde, while continuing the wonderful life I have with my family in Kristiansund.’

He added that his son Elijah had told him: ‘I will never move from Kristiansund, dad.’

Solskjaer also said last year that he wanted to manage abroad ‘in five to ten years’, adding that his children ‘must grow up first’.

But Solskjaer is revered at Old Trafford, having played for the Red Devils between 1996 and 2007, and knows all about the club’s philosophy.

Sir Alex Ferguson would regularly summon the Norwegian striker from the bench if his side needed a goal, and more often than not he obliged. 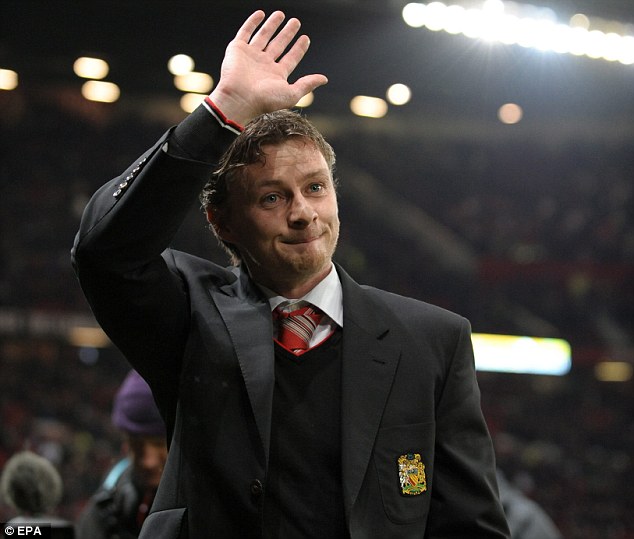 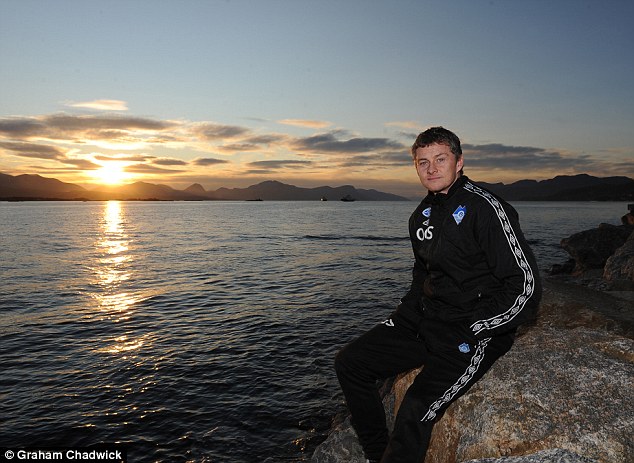 Solskjaer is pictured in his tracksuit for Molde FK, where he has had two stints as manager, in a picture for the Daily Mail in September 2011 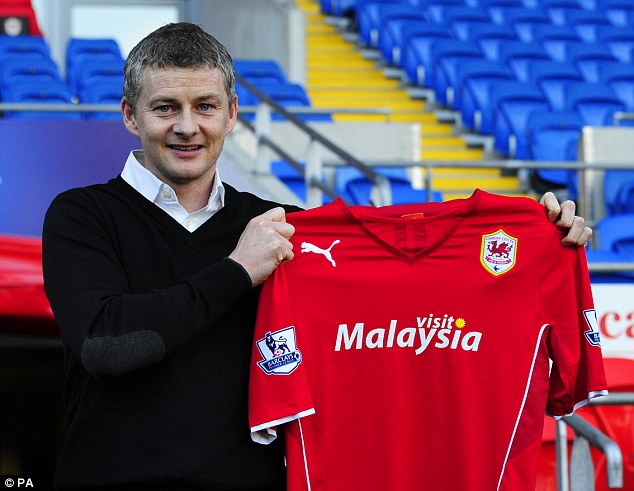 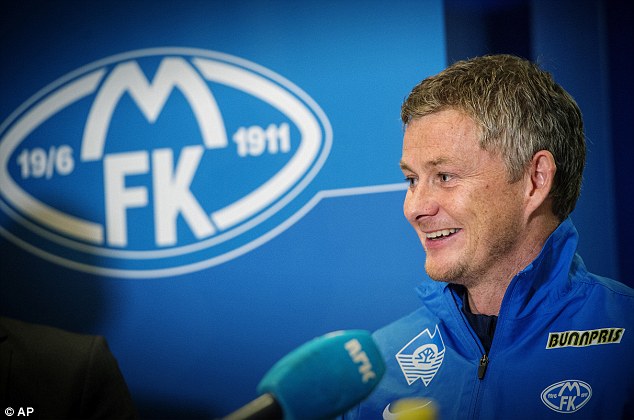 Solskjaer regularly turned a United match in their favour, scoring 126 goals in 366 appearances, many after coming on as a substitute.

Known as the ‘baby-faced assassin’, Solskjaer once climbed off the bench and scored four times in an 8-1 win over Nottingham Forest.

Solskjaer’s most memorable goal came in the 1999 Champions League final against Bayern Munich when, as a substitute, he scored United’s dramatic injury-time winner.

Ferguson apparently claimed that Solskjaer was such an effective substitute because he watched the game from the bench more intently than other players.

He will be watching intently again this Saturday when, having made the move from super-sub to interim boss, he takes charge of his first United game against Cardiff.

Ole Gunnar Solskjaer has been appointed as Manchester United’s caretaker manager until the end of the season.

The former United striker replaces Jose Mourinho after he was sacked on December 18, two days after a heavy 3-1 defeat to Liverpool at Anfield.

Here, we look at how the former Norway international has worked his way up to become the new man to lead the Red Devils.

Solskjaer was a surprise signing by Sir Alex Ferguson in July 1996 after he impressed in his homeland, netting 20 in one season for Molde. He made an instant impression, scoring six minutes into his United debut before registering 18 Premier League goals in his first season at Old Trafford, which led to the Norway striker being dubbed the ‘Baby-faced Assassin’ by the media for his youthful looks. Solskjaer scored four goals in 12 minutes as a substitute against Nottingham Forest before entering United folklore for scoring the stoppage-time winner in the 1999 Champions League final against Bayern Munich to clinch an historic treble. He remained a key part of United’s teams over the years, however knee injuries plagued the latter part of his career before he hung up his boots in 2007.

Solskjaer took over as United’s reserves manager in May 2008 to become the first person to take on the role in a full-time capacity for two years. During his tenure, he was offered the role as Norway national team boss but he turned it down. He remained in the job until January 2011 before returning to his homeland and taking charge of Molde.

Molde-ing into a successful manager

Solskjaer moved to Molde as first-team manager on a four-year contract in November 2010, but did not officially take over the role until two months later. They initially struggled at the start of his reign but came back to take the Tippeligaen (Norway’s top flight) title in his first campaign. The former striker was approached by Aston Villa six months later, but once again he rejected this role before guiding the club to a second successive league crown. The 2013 season was less successful, however Solskjaer still yielded a Norwegian Cup success to further enhance his managerial reputation.

Cardiff made their move for the highly rated manager as they fought against relegation from the Premier League. His reign started in positive fashion, with a 2-1 comeback victory over Newcastle in the FA Cup third round, but just three wins and three draws from 18 league matches saw the Bluebirds immediately return to the Championship and he was sacked in September following a poor start to the campaign.

Fourteen months after his Cardiff departure, Solskjaer returned to Molde for a second spell in charge on a three-and-a-half-year contract. His impact was immediate, guiding the club to the last 32 of the Europa League after negotiating a difficult group containing Fenerbahce, Ajax and Celtic. They fell to eventual winners Sevilla and finished fifth in the domestic league. Solskjaer helped the club to second place in the 2017 and 2018 season and signed a three-year contract extension on December 3, 2018.

On December 19, 2018, the 45-year-old became the second player of Ferguson’s 1999 treble-winning team to take the reins at Old Trafford on a temporary basis. Ryan Giggs was in charge for four matches during the 2013-14 season, following the departure of David Moyes, on an interim player-manager basis. The Welshman won two of those matches before becoming successor Louis Van Gaal’s assistant for the next two seasons. Solksjaer has 21 Premier League games in which to rescue the Red Devils season, with the club 19 points off Premier League leaders Liverpool and 11 behind fourth-placed Chelsea.