The Queen, 92, goes horse riding with Prince Andrew in Windsor

Long to rein over us: The Queen, 92, goes horse riding with Prince Andrew through early morning mist in grounds of Windsor Castle

The Queen took the reins today after going for a ride around her Windsor estate followed by her son Prince Andrew.

The 92-year-old monarch was seen on the early morning ride along with two members of the Royal household.

The Queen, pictured centre, was seen riding through the Windsor estate this morning with two members of the Royal household 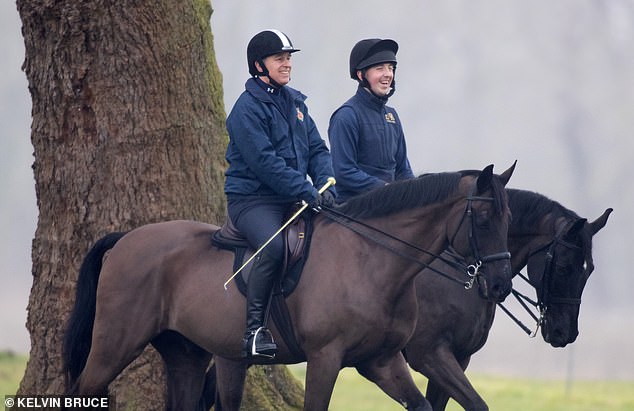 Prince Andrew, pictured, was also seen today going for a ride during the mild weather

Earlier this week, the Queen revealed how her father struggled to use his special secret service phone during a visit to GCHQ’s old headquarters to mark the listening agency’s centenary.

She told how her father, King George VI, used to struggle with the technology of the old ‘scrambler’ phone at Buckingham Palace, which required some patience while the valves heated up.

Inspecting some old machines at the agency’s first headquarters, Watergate House, behind The Strand in central London, she said: ‘I remember my father had one. He used to get so cross when it didn’t scramble.

‘It took some time to heat up.’

As head of state for 67 years, the Queen is the longest serving customer of Government Communications Headquarters – and no slouch when it comes to understanding the work of the security, intelligence and cyber agency.

She toured Watergate House – now the head office of an investment company – with Jeremy Fleming, GCHQ’s current director, and met members of staff.

She also viewed historic intelligence and machinery in the Alan Turing Room, the boardroom named after the mathematician and computer scientist who was instrumental in breaking German codes during the Second World War.

‘He was an amazing man with his brain and everything,’ the Queen said.