Prince Philip pulled out of the traditional Maundy Thursday church service because of a problem with his hip, it is understood.

The Duke of Edinburgh, 96, was named in the order of service and had hoped to join the Queen, 92, at the centuries-old event, which was this year held at St George’s Chapel at Windsor Castle.

However Philip, who has officially retired from royal duties, ultimately decided not to take part, apparently because he has been experiencing some trouble with his hip.

It is not thought to be a serious issue as he was seen driving in Windsor Great Park yesterday.

The Queen undertook the tradition of giving red and white purses containing Maundy money to pensioners, chosen in recognition of their service to the community and the Church 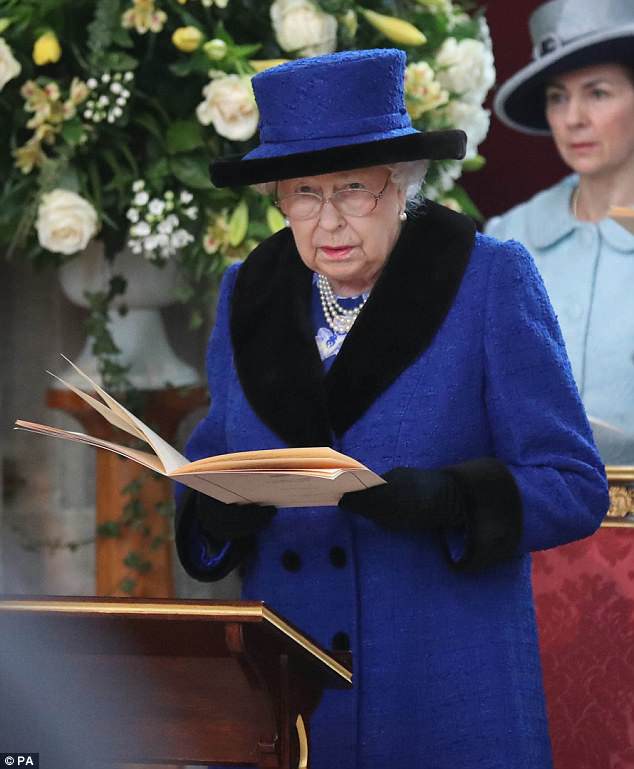 She handed two purses – one white and one red – to 92 men and 92 women, marking her 92nd birthday, which she will celebrate next month

Buckingham Palace would not comment on the his health but a spokeswoman said: ‘The order of service was printed some weeks ago when it was hoped the Duke would be able to take part. His Royal Highness has since decided not to attend.’

The Queen appeared in good spirits as she undertook the tradition of giving the red and white purses containing Maundy money to pensioners.

She handed two purses to each of the 92 men and 92 women, marking her 92nd birthday next month.

The pensioners were chosen in recognition of their service to the community and the Church.

This year the service was held at St George’s Chapel, at Windsor Castle, where Prince Harry and Meghan Markle will tie the knot on May 19.

Maundy Thursday is the Christian holy day falling on the Thursday before Easter and commemorates the Maundy and Last Supper of Jesus Christ with the Apostles.

Every year the Queen marks Maundy by offering alms to senior citizens – retired pensioners recommended by clergy and ministers of all denominations – in recognition of service to the Church and to the local community. 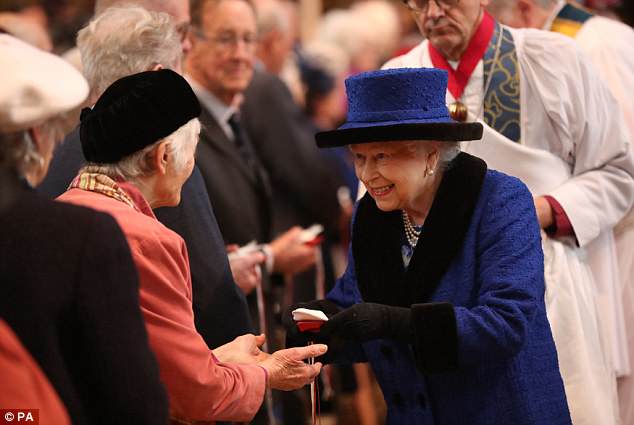 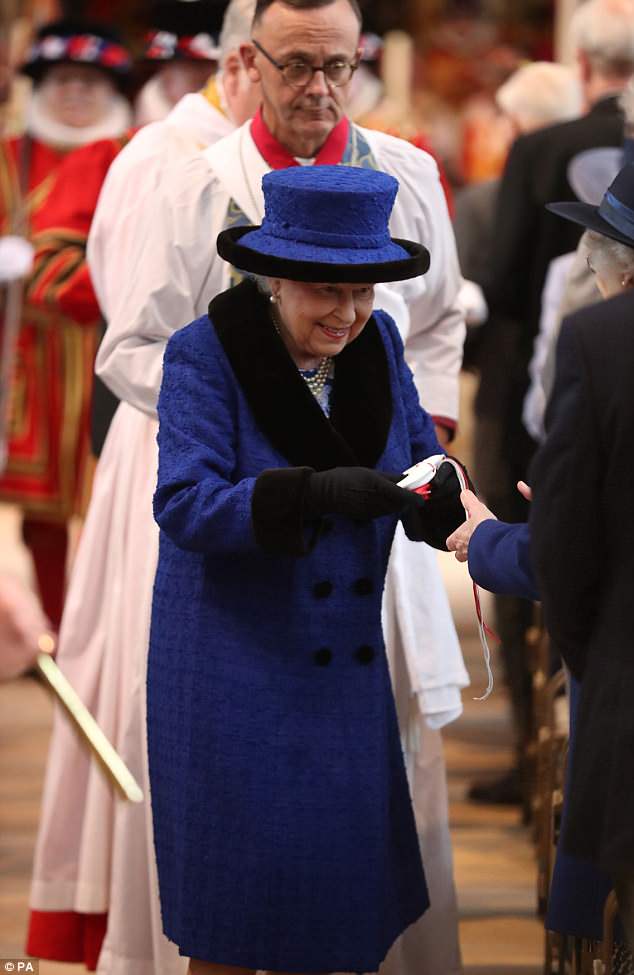 What is Maundy Thursday and why is it called that?

What is Maundy Thursday?

Maundy Thursday is the Thursday before Easter and is observed by millions of Christians worldwide in commemoration of the Last Supper of Jesus Christ and his disciples. Christians also believe the Jesus commanded his followers to love each other and washed their feet during the meal.

It always precedes Good Friday and marks the start of the three-day Easter celebration.

Why is it called Maundy Thursday?

The word Maundy is derived from the Latin word ‘mandatum,’ which means command.

How is Maundy Thursday celebrated in the UK?

Queen Elizabeth observes Maundy Thursday by taking part in the distribution of alms. In 2018 this will take place at St George’s Chapel, at Windsor Castle.

The number of pensioners chosen rises with the monarch’s age. In 2018 the Royal Maundy will be distributed about 92 women and 92 men,

All of the recipients will be senior citizens who will receive the Royal Maundy in honor of their service to the church and the local community.

This year the red purse contains a £5 coin, commemorating four generations of royalty, and a 50p coin commemorating the Representation of the People Act 1918, gave some women the right to vote. Both coins have been minted in 2018.

The White Purse contains uniquely minted Maundy money – one, two, three and four silver penny pieces – to the value of 92p, in keeping with the monarch’s age.

The Royal Maundy is an ancient ceremony which originated in the commandment Christ gave after washing the feet of his disciples the day before Good Friday.

Historically, this sum of £5.50 in the red purse is made up of £3 for clothing, £1.50 in lieu of provisions and £1 for the redemption of the Sovereign’s gown which, before Tudor times, used to be divided between the recipients.

The White Purse contains uniquely minted Maundy Money, which, unlike coins in general circulation, bear the portrait of the Queen produced by Mary Gillick at the start of her reign.

Gillick, a sculptor, designed the portrait which appeared on the coins of the UK and some Commonwealth countries from 1953 until preparations for decimalisation began in 1968.

The portrait of the Queen wearing a wreath on her head was considered to reflect the nation’s optimism as it greeted a new monarch in the post-war years.

The history of the monarchs and the Maundy Thursday service

The first monarch to take part in a Maundy Thursday service was King John, of Magna Carta and Robin Hood fame, who distributed gifts of clothes and money to the poor in Knaresborough in 1210.

John was also the first to present the poor with silver coins and is recorded as having done so in Rochester in 1213.

John’s grandson Edward I, the king known to posterity as ‘the Hammer of the Scots’, was the first to confine the tradition to Maundy Thursday alone, which, until his reign, could be conducted on any day of the year.

By 1363 and Edward III, the tradition had evolved into a ceremony that is still recognisable today, with monarchs handing out money equivalent to their age in years.

The ceremony was little changed by the dawn of the Tudor period, although rulers could – and did – increase the number of beggars involved to show their religious devotion and humility.

None took it more seriously than Mary I – or Bloody Mary – who in 1556 washed the feet of 41 ‘poor women’ and spent the entire ceremony on her knees.

Later monarchs were less keen on the service, with some, among them Charles I, rarely bothering to take part.

Charles II, anxious to curry favour with his subjects following the Restoration, took part in the ceremony without fail, including during the plague years.

Although today’s ceremony takes place in a different location each year, Queen Victoria insisted on doing it at Westminster Abbey – a custom that remained in place until the Queen took the throne in 1952.

She has taken part in the Royal Maundy Service in all but four years of her reign, including in 1954 when she was away touring the Commonwealth.

In 1960 she was also forced to pull out because of the imminent birth of Prince Andrew, again in 1964 for the birth of Prince Edward and in 1970 due to a tour of New Zealand.