The Queen Mother and Wallis Simpson was the most savage royal feud, says confidant MICHAEL THORNTON

During the turbulent history of the House of Windsor, royal sisters-in-law have seldom emerged as intimate friends.

In recent months, Court circles have reverberated with rumours that Britain’s future Queen, Kate, Duchess of Cambridge, and her brother-in-law’s wife, Meghan, Duchess of Sussex, are not exactly on hugging terms, although both have laughed off suggestions of a rift.

And thousands of startled television viewers have never forgotten the unexpected ferocity with which the present Queen’s daughter, the Princess Royal, slapped down the BBC’s royal reporter Jennie Bond for mentioning Anne’s divorced sister-in-law, Diana, Princess of Wales, during an interview before Diana’s death.

Court circles have reverberated with rumours that Kate and Meghan are not exactly on hugging terms, although both have laughed off suggestions of a rift

But for sheer virulence and long-lasting antipathy no royal feud in living memory quite measures up to the steely and implacable ostracism practised for 50 years by the late Queen Mother against her despised and twice-divorced American sister-in-law, Wallis Simpson, Duchess of Windsor.

The first of a new two-part documentary, The Queen Mum: The Reluctant Queen, to be screened tonight on Channel 5, asserts that it was Elizabeth’s personal influence as the new Queen Consort that was instrumental in Wallis being denied the title, Her Royal Highness, on her marriage in 1937 to the Duke of Windsor, after he had abdicated the throne as Edward VIII. His reign lasted less than 11 months. The denial of the HRH has been challenged as contrary to Common Law.

Indeed, a new book by Anna Pasternak, called Untitled: The Real Wallis Simpson, Duchess Of Windsor, is dedicated by the author ‘To Wallis, Her Royal Highness The Duchess of Windsor’, but that status has never been officially accepted.

When the Duchess’s coffin left her palatial Paris mansion in the Bois de Boulogne in 1986 it was not covered by her husband’s royal standard, and the HRH does not appear on her gravestone next to the Duke’s in the royal burial ground at Frogmore.

Tonight’s documentary also states that it was at the new Queen’s insistence that the Windsors were condemned to permanent exile in France. Both of them believed this.

At one of my meetings with the Queen Mother in 1978, she smiled enigmatically at this suggestion and merely commented, almost absently: ‘A country can only have one King at a time.’

For sheer virulence and long-lasting antipathy, no royal feud in living memory quite measures up to the ostracism practised for 50 years by the Queen Mother against Wallis Simpson

I became fascinated by this royal vendetta at an early age after reading the Duchess of Windsor’s memoirs, The Heart Has Its Reasons, published in 1956, in which Wallis described an encounter with the then Duchess of York at Royal Lodge eight months before the Abdication.

‘Her justly famous charm was highly evident,’ she observed acidly of Elizabeth. This was far from the first exchange between these two formidable adversaries.

In 1935, before Edward became King, the Duchess of York had walked into the drawing-room of Fort Belvedere, the Prince of Wales’s country retreat, only to overhear Wallis Simpson performing a particularly cruel and vindictive imitation of her.

Brigadier Oliver Hogg’s wife, Ella, present on that occasion, was later to say that ‘from the moment of overhearing, the Duchess of York became her implacable enemy’. Wallis said she had no sense of humour.

Ironically this situation was reversed when I visited the Queen Mother’s London home, Clarence House.

I had been expecting only to meet her Private Secretary, Lt Colonel Sir Martin Gilliat, an urbane homosexual somewhat given to rolling his eyes at handsome guardsmen.

To my alarm, I found myself a guest at a lavish luncheon party, with liveried footmen standing behind every chair, and our royal hostess repeatedly pressing a Fabergé pearl bell to summon service.

‘This is my Borgia bell,’ she announced and seemed in sparkling form.

Adopting a remarkably authentic American accent, she gave an hilarious account of Mrs Simpson’s sojourn at Balmoral in 1936, and her views on the décor of the castle. ‘This tartan’s gotta go!’ H.M. mimicked in unmistakably harsh Baltimorean tones. ‘I just have to do this place over.’

No one listening would have thought she lacked a sense of humour.

At an earlier meeting with the Queen Mother at a luncheon given in the Eaton Square penthouse of the American-born musical comedy star Dorothy Dickson, one of Elizabeth’s lifelong friends, who taught both the present Queen and Princess Margaret to dance, I found myself placed on HM’s left. 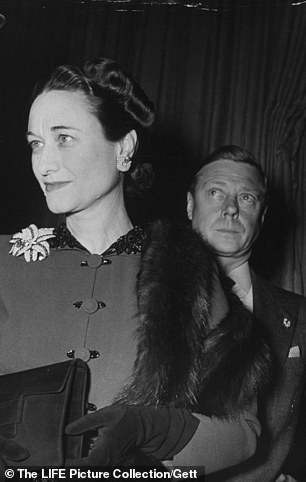 The Duke of Windsor had by then been dead for six years, and with some trepidation I very gently raised the subject of the Abdication crisis.

Once again she was elusive and lifted her hand to halt me in mid-sentence.

‘You know, it’s something I never talk about because it was all so dreadful at the time. It was a tragedy because he [referring to her brother-in-law] used to be such fun before she came along.’

There was a moment of silent reflection and then she added: ‘Love does strange things to people. I am afraid the truth is that at that time he was rather more than a little mad.’

And then she resolutely changed the subject.

Six years earlier, on a spring afternoon in 1971, I sat in the blue and gold Parisian drawing-room of the Duke and Duchess of Windsor’s palatial mansion in the Bois de Boulogne and heard what purported to be the other side of the story.

In 1957, Queen Mary’s official biographer, James Pope-Hennessy, visited the Windsors at their country home, Le Moulin de la Tuilerie, and noted, on the part of the Duchess, one ‘facial contortion, reserved for speaking of the Queen Mother, which is very unpleasant to behold, and seemed to me akin to frenzy’.

I also was on the receiving end of this contortion, as soon as Elizabeth’s name was mentioned.

The Duke, only months away from being diagnosed with inoperable throat cancer, suffered a convulsive spasm of coughing, but managed to deliver this verdict on his sister-in-law: ‘Behind that great abundance of charm is a shrewd, scheming and extremely ruthless woman.’

He paused, with one of his most charming smiles and added: ‘But of course you cannot quote that.’

The Duchess imposed no such embargo. ‘The Duke would have loved to return to live in the land of his birth,’ she said, ‘but our way was blocked at every turn. We were never allowed to go back, and we never will be allowed.

‘Not until the day we die. She will never permit it. When we are dead, perhaps she may at last forgive us.’

‘And the reason Ma’am?’ I inquired. The Duchess’s right arm shot out as if she was taking aim with a gun. ‘Jealousy,’ she said.

‘Jealousy of the Duke?’ I asked. ‘No!’ cried the Duchess, and for the first time her southern American origins were audible. ‘Jealousy of me for having married him.’

The Windsors then embarked on an unconvincing catalogue of all the paranoid rumours they had believed about Elizabeth for decades. 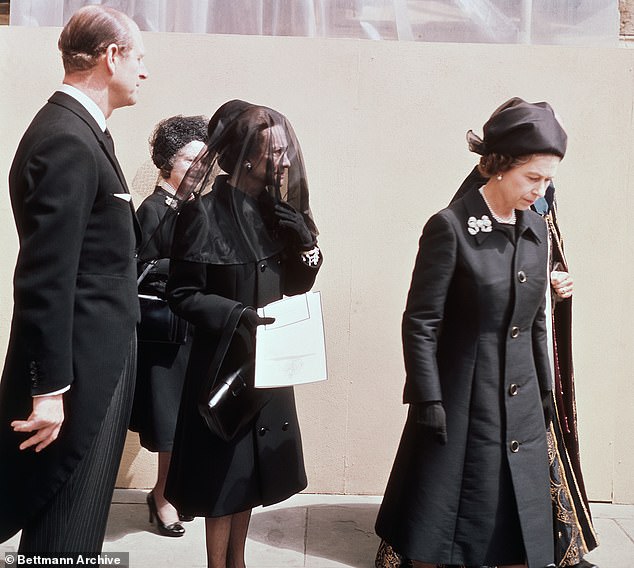 At the Duke of Windsor’s funeral in 1972, the Queen Mother dealt gently by Wallis Simpson, taking her by the arm and murmuring: ‘I know how you feel. I’ve been through it myself’

They claimed Elizabeth had really wanted to marry the Duke herself and become the Princess of Wales.

The Duke insisted that he had ‘proof positive’ that the Queen Mother had personally engineered the Duchess’s exclusion from royal rank, and was also responsible for their banishment to the Bahamas, where he was appointed Governor-General in 1940, and where Foreign Office instructions were issued to local ladies not to curtsey to the Duchess.

In this belief, the Windsors were mistaken.

Queen Elizabeth actually opposed the Duke becoming Governor- General and wrote to the Colonial Secretary, Lord Lloyd to say: ‘The Duchess of Windsor is looked upon as the lowest of the low.’

The new King and Queen were well aware of the Duchess’s close relationship with the German ambassador in London, Joachim von Ribbentrop, and in 1937, after their marriage, the Windsors made a disastrous visit to Germany, where the Duke was observed giving the Nazi salute, and he and Wallis were photographed in animated discussion with Hitler.

After the fall of Germany, secret files on the Duke’s conversations with Hitler were retrieved and brought to London, where the contents were seen by both the King and the Queen. When the Duke of Windsor learned of this, he was reported to be extremely worried.

In the meantime, Buckingham Palace was bombed by the Luftwaffe, and Queen Elizabeth rose to the status of a national heroine by saying: ‘I’m almost glad we have been bombed. It makes me feel I can look the East End in the face.’

When Hitler learned that Elizabeth was taking target practice in the grounds of Buckingham Palace with a loaded revolver, shooting rats in preparation for a German invasion, he was reported to have described the Queen as ‘The most dangerous woman in Europe’.

In 1967, after more than 30 years of estrangement, the sisters-in-law came face to face at the unveiling of a plaque in The Mall to Queen Mary. As banks of cameras flashed and clicked, they maintained a long and uncomfortable handshake, but Wallis pointedly omitted to curtsey to a crowned and annointed Queen.

At the Duke of Windsor’s funeral in 1972, Elizabeth dealt gently with his widow, taking her by the arm and murmuring: ‘I know how you feel. I’ve been through it myself.’

On the Duchess’s departure, Elizabeth astonished courtiers by kissing Wallis on the cheek.

In 1976, the Queen Mother made an official trip to Paris, and a visit to her ailing sister-in-law was pencilled in for one afternoon.

But it was never to take place.

Wallis’s doctor advised the Queen Mother’s staff that she ought not to go, as the Duchess was suffering from dementia and paranoid hallucinations.

From the British Embassy, Elizabeth dispatched her page with a basket of roses and a card in Elizabeth’s own hand.

It read: ‘In friendship, Elizabeth’.

The Queen Mum: The Reluctant Queen is on Channel 5 on Saturday at 9pm. Michael Thornton is author of Royal Feud: The Queen Mother And The Duchess Of Windsor.