Wearing a hat that will wow is one way to stand out at the social event of the summer – The Royal Ascot.

With a history as rich as it is long, Royal Ascot sits proudly as the jewel in the crown of horse racing, and is a favourite in the summer calendar for Britain’s royals.

A renowned racing fan and faithful Ascot attendee, The Queen, alongside the Duchess of Cambridge and Duchess of Sussex, will be taking in the action on the track from the Royal Enclosure.

But the question remains every year – what style of hat will they wear?

Luxury department store Fenwick has once again paired with the Royal Ascot Millinery Collective, to release a collection of dazzling pieces created by some of the monarch’s favourite designers – including Stephen Jones OBE and Philip Treacy OBE.

Philip Treacy’s elegant hat, which costs almost £3,000. He called it ‘an ode to British tradition adapted for contemporary society’ 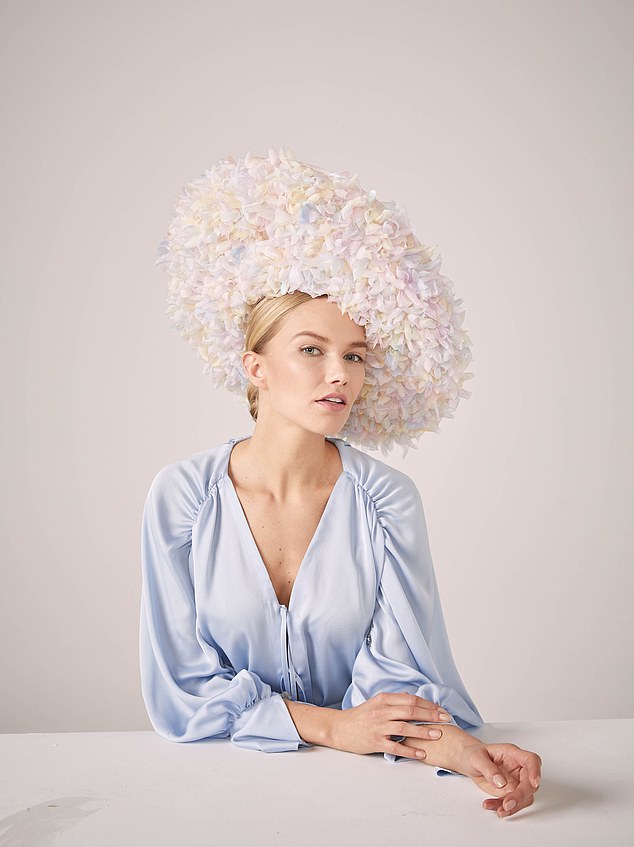 Meanwhile Merve Bayindir drew from the current trend of huge brims for this regal piece, which costs £2,700

Several of the pieces have towering styles, making them sure to help the wearer stand out from the crowd.

The ten piece collection features two hats that cost all £3,000, although some are just a tenth of the price at £300.

And this year, to reflect the global support for the Royal meeting, it will feature the first International designer into the regal collection. 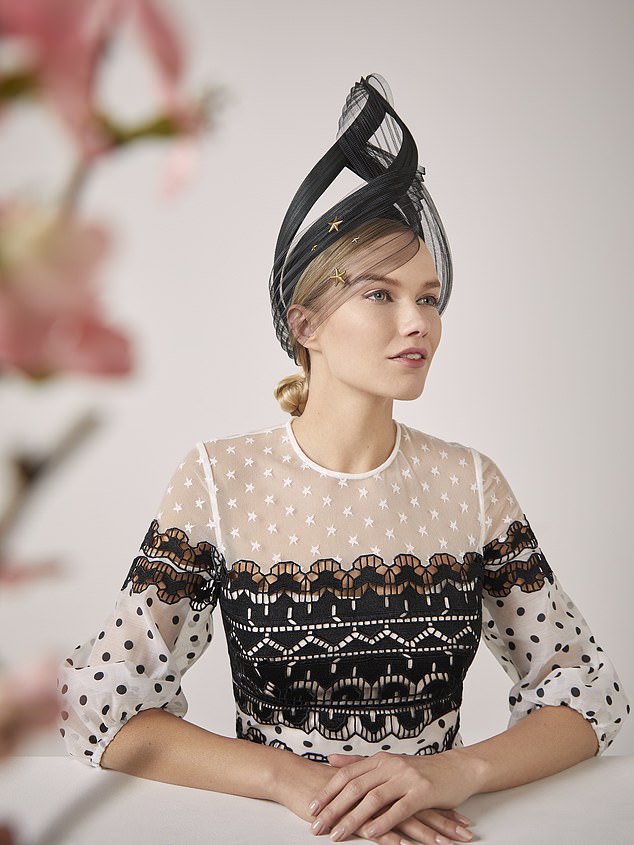 Australian designer Jack & Jill is the first International milliner to be featured in the collection, and costs £350

Joining from Australia – a country recognised for its modern, high-quality and diverse range of millinery – is renowned Melbourne-based milliner Millinery Jill.

Nodding to the pieces that Meghan Markle, Princess Eugenie and Sophie Countess of Wessex wore last year, she suggested that hats with ‘huge brims’ were selling impressively.

She said: ‘In Australia I cannot keep up with orders for hats with bigger brims. They are literally selling within minutes of completion.’

She also suggested that the unconventional could be spotted on the race course this year, saying: ‘Also, women’s top hats are creating a strong and fashionable silhouette at the racetrack.’ 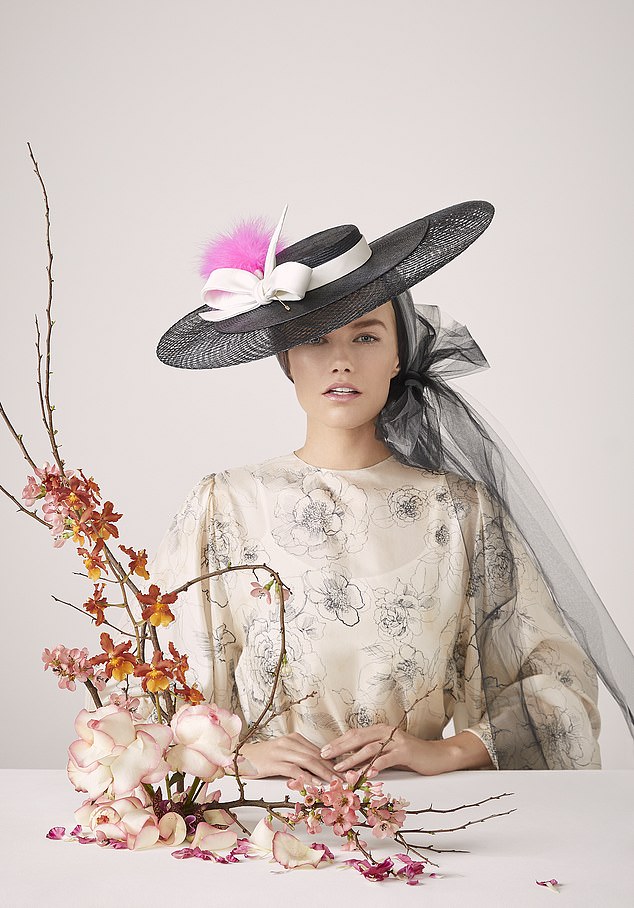 Awon Golding called this hat, which costs £880 and featured a monochrome design and a pop of bright pink colour, a classic piece with a ‘My Fair Lady twist’ 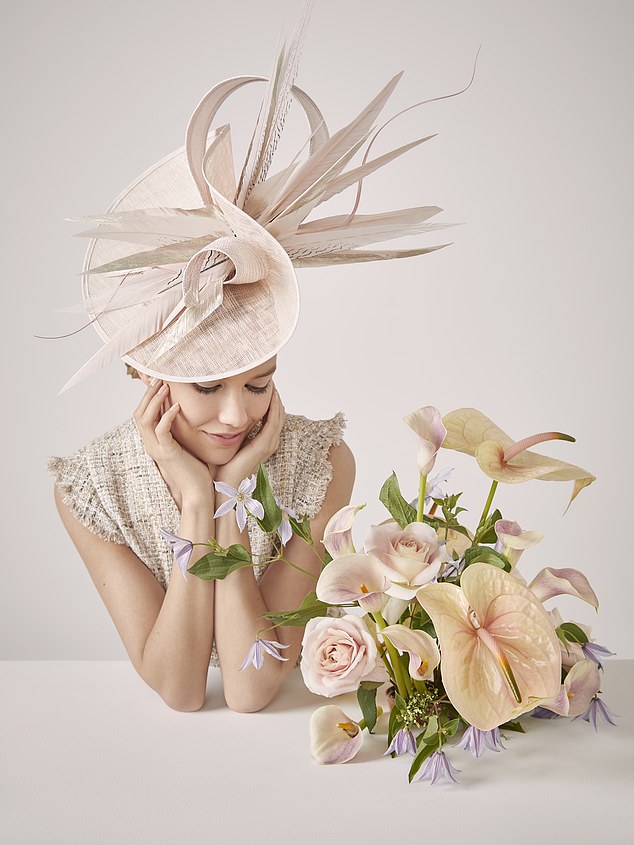 Vivien Sheriff’s feather piece is slightly more understated in a fresh nude colour, but bold in it’s shape and design

Meanwhile Philip Treacy OBE called the hat he created for the collection ‘a lifetime combination of craft and technique combined with new raw materials.’

He described the hat, which costs £2,995, saying : ‘This is a handblocked calotte I have been working on since last summer. I designed different versions. It’s an ode to British tradition adapted for contemporary society.’

Awon Golding also picked up on the idea of two world’s meeting, commenting that their £880 hat was inspired by ‘classic millinery with a hint of My Fair Lady glamour.’

While some of the hats focued on a bold but mainly monochrome design, others were more vibrant and playful. 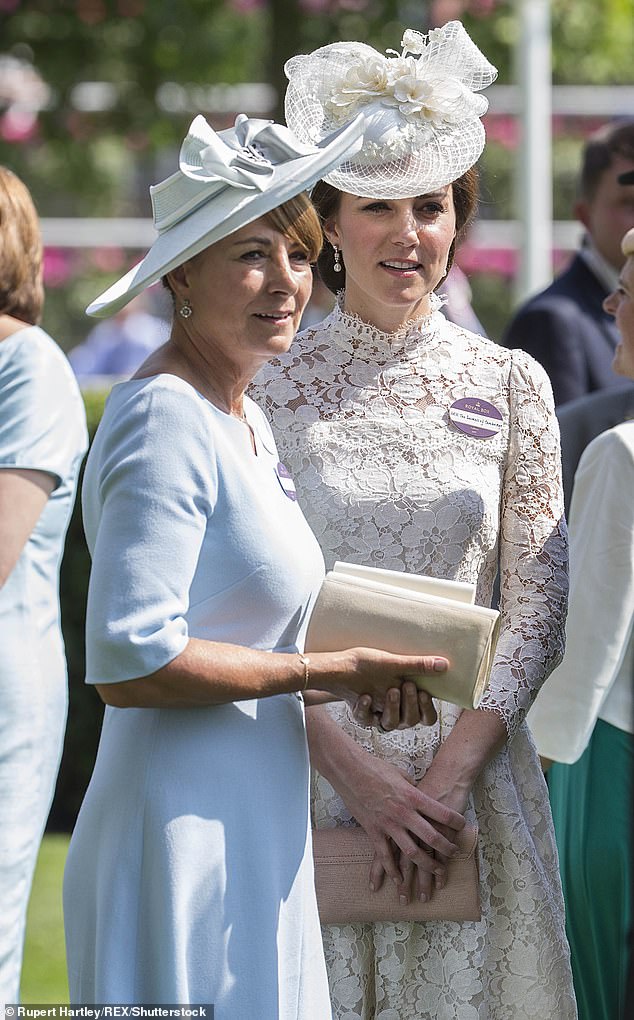 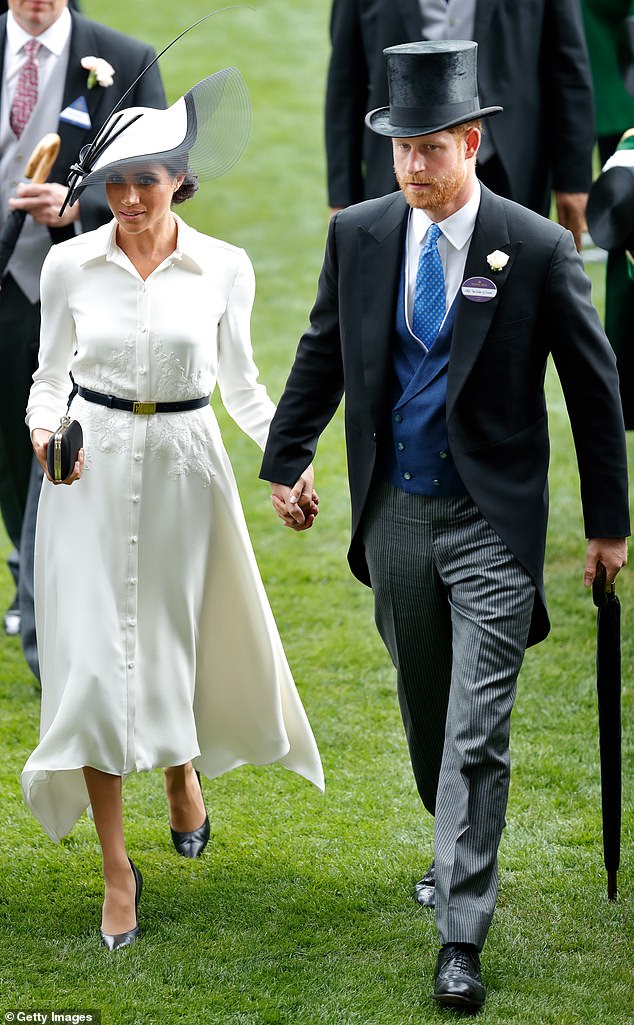 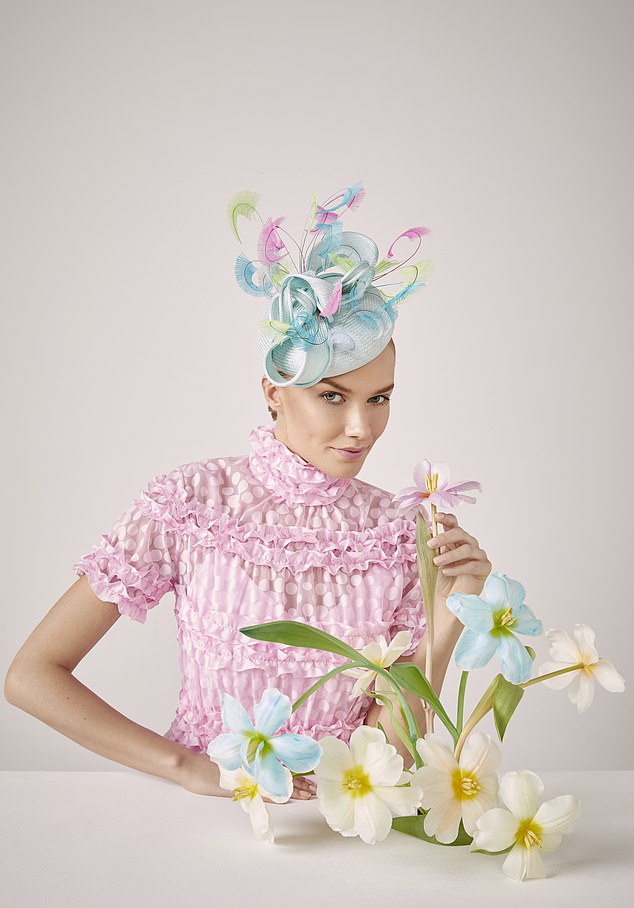 Siana Yewdall produced a fun and fluttering hat that costs just £550, saying the whole point of the event was to feel confident and happy: ‘I always like to advise choosing a hat that makes you feel happy and confident, and if you are happy and comfortable in your hat, you will forget you have it on! The right hat will make you smile!’

Merve Bayindir also put together a piece with a huge brim, saying: ‘The design for this piece took about a month. The base colour was very important, and it was hard to get it right.

‘We then had to get the custom leaf cut and colour each leaf before sewing each of them on to a very large base. It is a special hat and like everything special, it took time and intricate detail to make it.’

Royal Ascot is Britain’s most valuable race meeting, attracting many of the world’s finest racehorses to compete for millions of pounds in prize money. 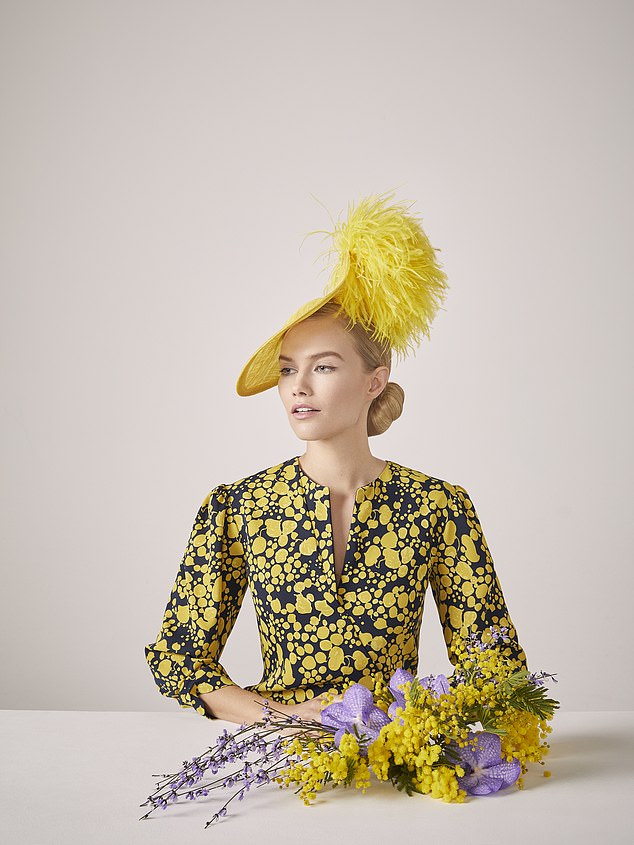 Layla Leigh’s is one of the most vibrant in colour in the collection, with the designer incorporating feathers into their design. It’s also one of the more affordable, and costs just £295 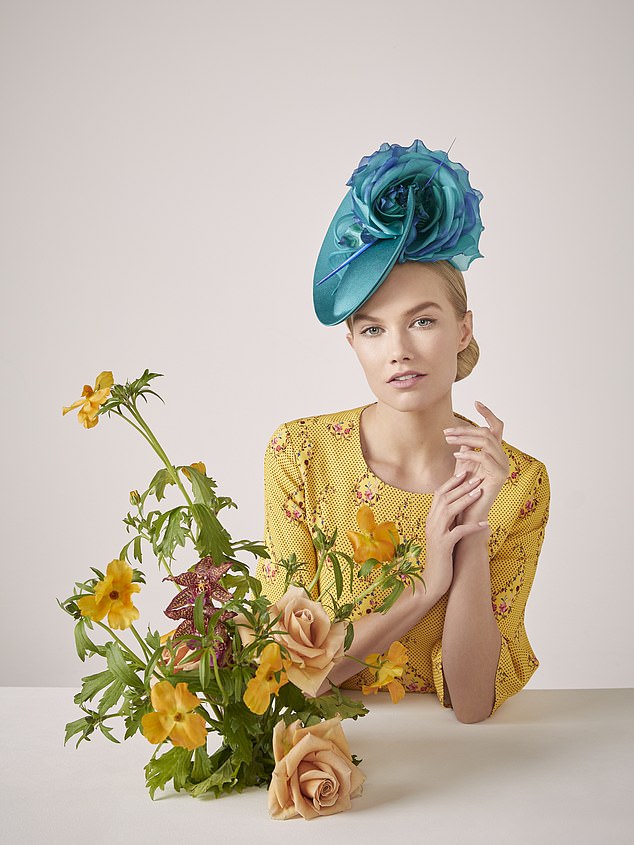 Juliette Botterill’s bold blue and turquoise piece has a bright rose like quality to it, that is reminiscent of a shell, £610

Whether it’s the arrival of the Royal Procession at 2pm sharp, six world-class races throughout the afternoon or the communal singing around Ascot’s Bandstand early evening, each day is an unforgettable whirlwind of excitement and colour.

Also synonymous with sartorial elegance, guests are welcomed to contribute to the sense of occasion.

Each year the racecourse is awash with colourful classic and contemporary fashions as well as the most magnificent and spectacular millinery creations. 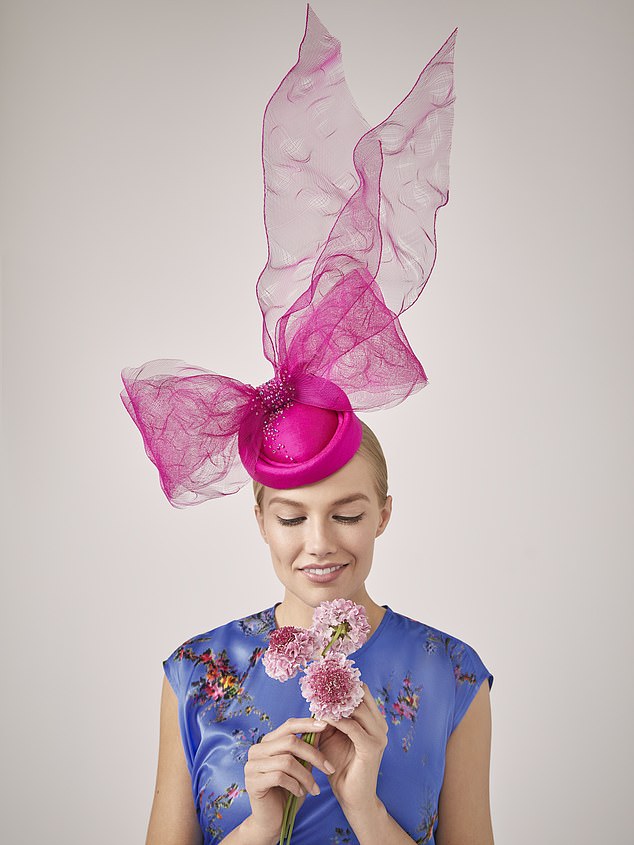 Bundle McClaren also admitted they took inspiration from statement bows and bold block colour for their towering piece, priced at £495 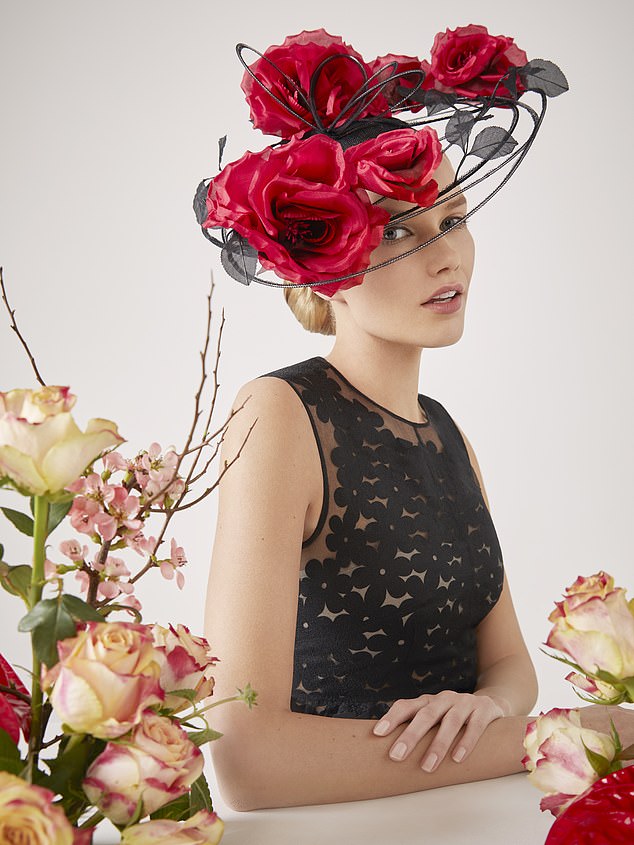