The Queen’s former chef reveals Buckingham Palace Her Majesty’s corgis used to have their own ‘a la carte menu’ – and says he whipped up rabbit, liver and beef for the dogs

The Queen’s former chef described Buckingham Palace kitchen as a restaurant for the royal corgis and said he used to cook them fresh food daily.

Darren McGrady, 58, who spent 15 years cooking for the royals, took to YouTube to share how he used to cook meats like rabbit and liver mixed with cabbage and rice for Her Majesty’s corgis, explaining there was a ‘menu’ of dishes to choose from.

At the time Darren worked at the palace the Queen had 12 corgis, which slept in wicker baskets in the ‘corgi room’ and were looked after by two footmen who collected the dishes from the kitchen.

The Queen’s former chef Darren McGrady (pictured), took to YouTube to reveal the process used to prepare food for the royal dogs 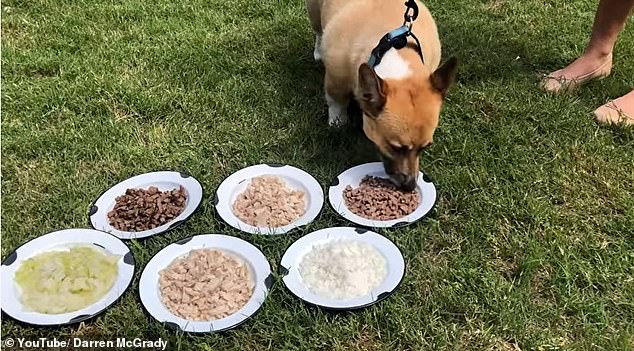 Darren prepared a selection of beef, chicken, liver, rabbit, cabbage and rice (pictured), explaining that each meat had to be finely cut

‘I did eventually, but one of the first jobs I had was cooking for the corgis. Making fresh food everyday, their own menu.’

Darren explained the most important thing was to ensure there were no bones left in the meat in case the corgis choked so he would brunoise the meat into tiny chunks.

Once the food was prepared, the footmen would take the food to the corgis and the Queen would often feed her dogs herself. 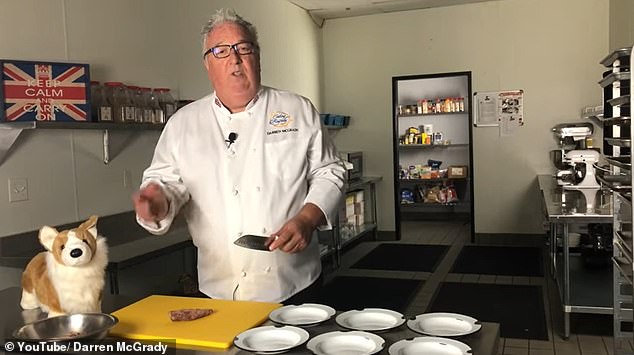 Darren told how the corgis used to travel with the Queen and her staff between the palaces and explained how at the ‘smaller’ houses, like Sandringham, the corgis would run into the kitchen.

‘In the royal kitchens it was like being a normal family, dogs running in and out of the kitchens all the time.’ 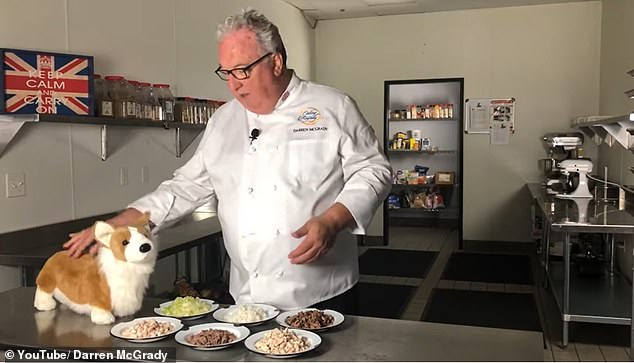 Darren (pictured) concluded that corgi’s favourite food is beef, after getting his own dog to chose between the dishes

The chef explained the royals have had corgis since 1933, when the Queen’s dad brought a corgi home called Dookie.

‘The Queen was given a corgi for her 18th birthday and called it Suzanne and she’s had over 30 corgis since then,’ he added.

Darren explained the monarch no longer has corgis, but instead has a cross between corgis and dachshund.

The post was met with excited comments from his delighted fans.