The REAL 1984! A new book reveals the horrors of North Korea

Writer David John has a whole string of stories that sum up the madness and tragedy of North Korea. Perhaps oddest of all was the day a fellow tourist in Pyongyang, the capital of the rogue state, tried to take a souvenir photograph of one of the country’s traffic policemen. The officers, all women and all chosen for their good looks, direct traffic at intersections with signals from hands clad in sparkling white gloves. ‘He was stopped by police shouting, “No pictures!” ’ says John. ‘We thought it was because we were not supposed to have an image of anyone in uniform, but it was because the traffic sign behind her was rusty and the North Koreans only want to show the country at its best.’

The country has long tried to hide the terrible realities of life under the Kim dynasty, but John’s new novel, a timely political thriller, Star Of The North, strips them bare. It may be fiction, but it’s so rooted in authentic detail its publisher is understood to have asked cyber-security specialists for help in defending itself against revenge hacking by the regime.

John, 52, who lives in north London, gathered his information first-hand by making a risky tourist trip to Pyongyang. He stayed in the Yanggakdo hotel, which has a fifth-floor listening station to spy on all its guests. In 2016 the Yanggakdo became notorious as the scene of a prank that cost American student Otto Warmbier his life. The economics major stole a propaganda poster and was sentenced to 15 years in a labour camp. When he was released after 17 months, he was comatose with severe brain damage and died soon after his return to the US.

‘North Korea,’ says John, ‘is not on everyone’s bucket list.’ As a lifelong aficionado of dictators, despots and tyrants it was, however, always on his. His two-week holiday there in 2012 is about to pay a massive dividend on its £3,500 cost. Star Of The North, set between the kind of gulag in which Warmbier was imprisoned, Pyongyang and Washington DC, is expected to be a global bestseller.

John’s fiction borrows from North Korea’s real-life atrocities to tell the story of a young American woman, Soo-min, who disappears from a South Korean island, believed snatched by Pyongyang’s agents. (Such abductions were indeed once a weapon of the North Korean state.) Star Of The North begins 12 years later, as her twin sister Jenna is recruited by the CIA to go in search of her sibling. Thus far, then, it’s in traditional thriller territory.

Where John’s work departs from the genre is in its heartbreaking scenes of starvation and terror, of neighbour informing on neighbour and of children orphaned and left to beg by the state’s law that three generations of a family must pay for any thought crime. (In North Korea, even allowing a picture of leader Kim Jong Un to get dusty is a punishable offence.)

The mortal hardships of the labour camps, human experimentation, the torture of political prisoners and the hypocrisy of an elite who live lavishly while ordinary citizens are condemned are all forensically examined.

The book even features the country’s semi-secret armoured train, whose 17 bullet-proof carriages, painted dark green with a sunshine yellow stripe, are stocked with everything from fine French wines to satellite comms. It made a rare real-world appearance in March this year transporting the North Korean leader to Beijing.

It is, however, the characters that resonate. From the decent Colonel Cho, an emissary to the UN who humiliates himself by telling New Yorkers that Kim Jong Il invented the hamburger (a ‘true fact’ in North Korea) to the aged Mrs Moon, who discovers a latent talent for black-market capitalism, the author reminds us that ‘the people’ are divisible from the regime.

Says John: ‘North Koreans are completely normal: they worry about their careers, fret about money, find joy in their children, drink too much bad beer… it’s just that they do it under the most perfect form of tyranny the world has ever seen.

‘Their country is in ruins. You criss-cross it on roads cratered and broken and glimpse women washing clothes in polluted rivers, men breaking rocks by hand in the fields and others doing nothing and waiting for nothing. Saddest of all are the children who should be in school getting an education, who are simply practising for mass gymnastic displays.

‘Who can forget the crowds after Kim Jong Il’s death was announced in 2011? It was as if they were under a spell, prostrating themselves in the snow and appealing to the sky with their hands. It was all about fear – even the children understood the gulag was waiting for anyone who shed too few tears.’ 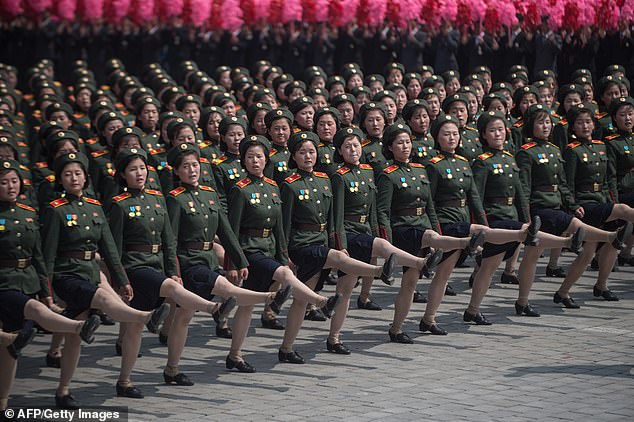 Says John: ‘North Koreans are completely normal: they worry about their careers, fret about money, find joy in their children, drink too much bad beer… it’s just that they do it under the most perfect form of tyranny the world has ever seen

This was the image that finally persuaded John to go to North Korea. He was working as a children’s books editor in 2012 when he published his first novel, set in Hitler’s Berlin, and then took a sabbatical for the trip that would give him such rich material for his second. Later he immersed himself in Korean culture, with two temporary moves to South Korea, once that same year to start his book and again in 2016 to finish it.

His timing could hardly be better – the novel is benefiting from a global PR campaign headed by Donald Trump and Kim Jong Un, who have just made a diplomatic swerve away from nuclear apocalypse by agreeing to come to the negotiating table.

Their historic peace talks, heralded by the release last Wednesday of three US citizens accused of spying by North Korea, will draw the world’s gaze to what John labels a ‘hereditary Marxist monarchy’. They’re still unlikely to do much for its tourist industry, though.

The author can now never go back.

‘I don’t think that would be wise,’ he says, despite the encouraging slogan on a T-shirt given to him as a memento of his last visit, which says ‘See you in Pyongyang!’

‘Star Of The North’ by D B John is published by Harvill Secker, priced £12.99