The real reason why you suffer anxiety after drinking alcohol

A sobriety coach has revealed exactly why drinking can make you feel anxious and depressed – and it’s bad news for people who drink regularly.

According to Annie Grace the more alcohol you consume the more likely you are to ‘feel numb’ to activities which used to make you happy.

In a post on Instagram the American Naked Mind founder explained the human body is intelligent and quickly builds up a tolerance for alcohol, which means the drinker doesn’t ‘lose control’ or get drunk as quickly.

But as this tolerance builds, with the help of a hormone called dynorphin, so does the body’s tolerance for other ‘joyful’ things like ice cream, sex and social relationships.

‘When alcohol enters your system, it releases an artificially high level of dopamine – you get a massive hit of pleasure. Your brain knows that this isn’t right, so in order to calm things down, your brain releases a chemical called dynorphin,’ she said.

Every drink after leads to the drinker feeling even more down, before they finally become numb. 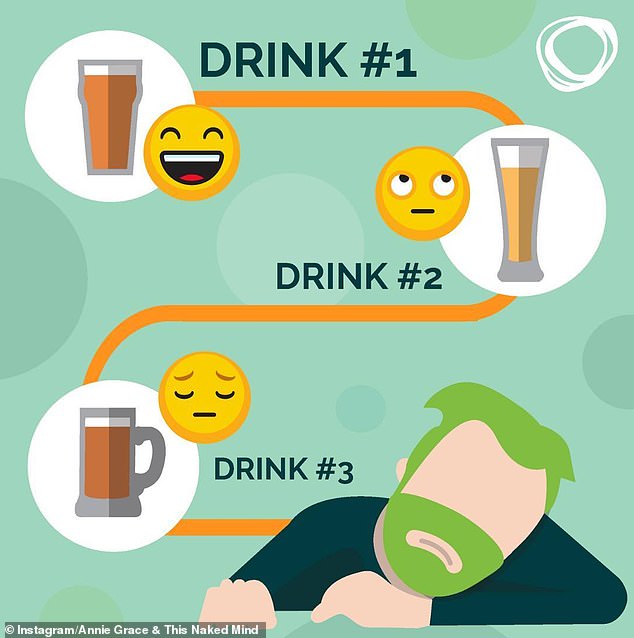 Every drink after the first leads to the drinker feeling even more down, before they finally become numb, Annie said

‘The endorphins don’t work as well and you never rise to the same level you were at just one drink ago.

‘Each subsequent drink brings you lower and lower until you fall well below the baseline of happiness you started with,’ she said.

Your brain soon gets used to the artificially stimulated hormones and then it can be hard to enjoy everyday activities, according to Annie who had her own toxic relationship with alcohol in her younger years.

‘Dynorphin affects the pleasure you get from everything,’ she said.

‘Pleasing doesn’t do it for you anymore. You have to return to using alcohol in higher and higher quantities until you become more and more focused on your next drink.’

Her message rang true for many of her followers who said they felt ‘hollow’ at the peak of their drinking.

Some admitted to feeling like they can’t register pleasure at all anymore, prompting them to ask more questions.

‘So, can you get the pleasure back if you quit alcohol altogether?,’ one woman asked.

And people were quick to respond.

‘It took me about three months to starting feeling joy in the small things again,’ one woman said. 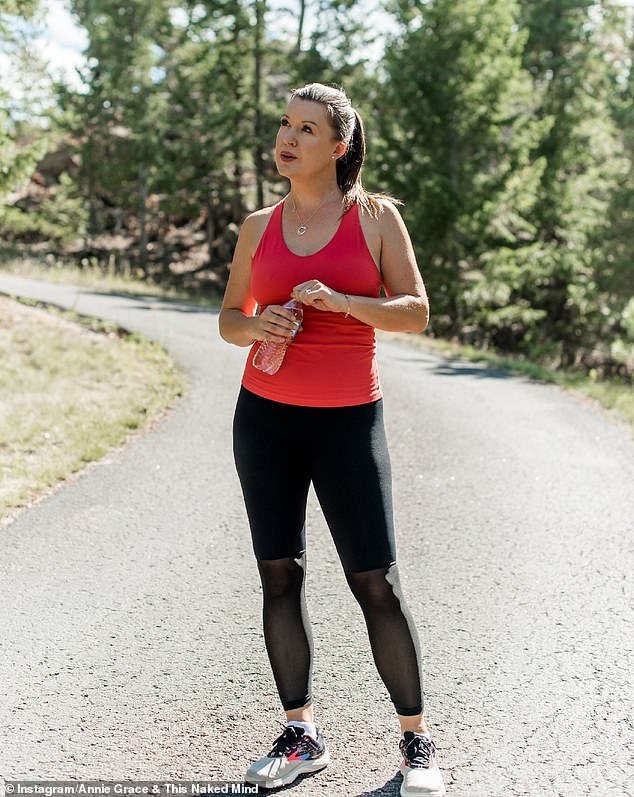 One woman said she would never go back to drinking after being sober for 11 years.

‘I would not exchange my natural joy for artificial, short term joy. EVER,’ she wrote on the post.

But others have found it takes a little longer to get ‘that feeling’ back.

‘I’m 2 1/2 years sober and I haven’t found/felt it yet… I’m actually to the point all I want is to feel like I did when I was drinking,’ one woman said.

Annie has 123k followers on Instagram and is very open about her own experience with alcohol.

She likes to adopt a science-based approach to drinking with her clients and provides a safe-space for people to understand their relationship with alcohol, and get sober.