The reason why mosquitoes bite some people more than others

There are more than 3,000 different species of mosquito.

Yet, perhaps surprisingly, only a fraction of them actually feed on human beings – and, even when they do, they discriminate when choosing who’s their next meal.

Some people end up covered in bites, while others escape with only a nibble or two. So why does this happen? And what factors might influence the mosquito’s choice?

Here, as detailed in The Conversation, Richard Halfpenny, a lecturer in biological sciences at Staffordshire University, explains what makes us worth biting.

Getting personal: This mix of bacteria and funghi on our skin produces an odour, which tells mosquitoes how tasty we’d be – but this varies from person to person

WHAT ARE THE OLD WIVES’ TALES?

There are many old wives’ tales on the matter, some more plausible than others.

Some think that blood type, having fair skin, being sweaty and even eating foods with garlic or apple cider vinegar can influence biting rates one way or the other.

For the most part, these don’t appear to have much influence when scientifically tested.

What we do know, however, is that all mosquitos use carbon dioxide as a long-range indicator that a host is nearby.

This initially alerts them, then – when they get closer to us – lactic acid, which is much more prevalent in human odour than other animals, further attracts them.

Other significant attractants are carboxylic acids, acetone and sulcatone.

Of course, this doesn’t tell us why some are generally bitten more than others, it just explains why humans end up as a mosquito’s meal and not a bird, cow or lizard.

The best evidence for what motivates a mosquito’s choice between different people is the variation in our skin microbiota.

We have an estimated 1m bacteria per square cm of skin, often comprising hundreds of species.

The odour this emits from our pores and hair follicles is the critical factor in telling mosquitoes how tasty we’d be.

In other words, mosquitoes don’t select somebody for their inner biology, but rather for the micro-organisms that live on their skin.

The composition of our skin microbiota mostly depends on our environment – what we eat and where we live.

Everything we touch, eat, drink and wash with has the potential to introduce new microbes, but genetic variation is also thought to affect how hospitable our skin is to the various species of microbes.

This may be through genetically controlled production of proteins in the skin that act as barriers and prevent microbes from establishing and growing on the skin, or through more mundane aspects such as a person’s tendency to sweat or how oily their skin is.

It’s worth remembering that, as pure sweat has no discernible odour, sweating itself may not be responsible for attracting mosquitoes. 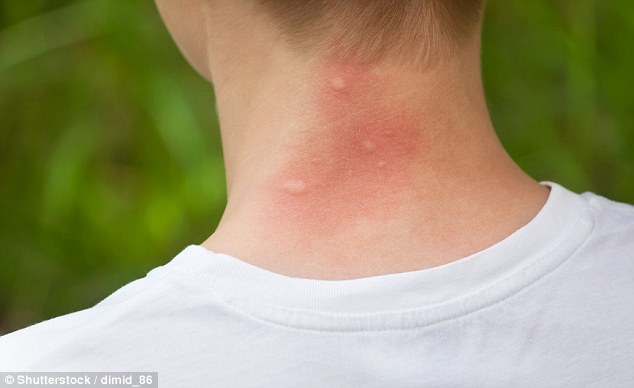 Fact: As pure sweat has no discernible odour, sweating itself is not be responsible for attracting pesky mosquitoes during the warm weather

Rather, the variation in the chemical composition of sweat, and sweat production rates between people, might result in beneficial conditions for some microbes that can attract mosquitoes.

While we’re pretty sure that mosquitoes choose their human hosts according to the bacteria which live on our skin, it’s less clear why they prefer the odour signature of some skin’s microbial life over others.

If we could learn this secret, perhaps we could change our skin’s bacterial composition to make ourselves less appetizing targets.