For almost half a century I have been making programmes for Radio 4, hundreds of broadcasts (probably thousands) about all sorts of subjects — but not until now have I been involved in one that I believe can fundamentally change people’s lives.

That’s a bold claim but read on, especially if you are a young parent or an older person who suffers occasional ‘senior moments’ and lives in fear of the onset of dementia.

The programme, Poetry By Heart, was commissioned to test my instinct that learning poetry by heart is ‘a good thing’. It turns out that it is, of course, but much more fundamentally than you could ever imagine.

My head is full of snatches of poetry — as is yours, I expect.

Mine is mostly verse learned as a child — and if you’re post-war baby-boomer, too — it’s likely to be similar stuff. A A Milne (‘They’re changing guard at Buckingham Palace …’), Lewis Carroll (‘Twas brillig, and the slithy toves …’), John Masefield (‘I must go down to the seas again …), Rupert Brooke (‘If I should die, think only this of me …’).

Bits and pieces I learned at home or at school, the first few lines of which have stayed with me across nearly seven decades, rattling around inside my head. And I’m not alone. Making this radio programme, I met a number of my contemporaries and found that we had very similar stocks of stored memories.

Michael Rosen (poet and former Children’s Laureate) and I overlapped at university and, 50 years on, found ourselves able to recite, in unison, Shelley’s Ozymandias — or at least the beginning of it:

‘I met a traveller from an antique land,

Who said — ‘Two vast and trunkless legs of stone

I began my research with the Duchess of Cornwall. She has recently taken over from the Queen as patron of the Royal Society of Literature and kindly invited me for tea at Clarence House.

Her taste in poetry isn’t as conventional as I had expected. She knew Ted Hughes and he read some of his poetry to her children.

One of her favourite poems is The Christmas Truce by the Poet Laureate, Carol Ann Duffy. ‘It moved me to tears,’ she told me.

Was poetry part of her childhood? I asked. ‘Very much so,’ she said. ‘My mother loved poetry. Her favourite was Right Royal by John Masefield.’ It’s a narrative poem that tells the story of a steeplechase, the winning horse and the jockey’s relationship with his beloved which is placed in jeopardy by the race — all rather apt, I suggested, given the Duchess’s love of horses and her own royal story. 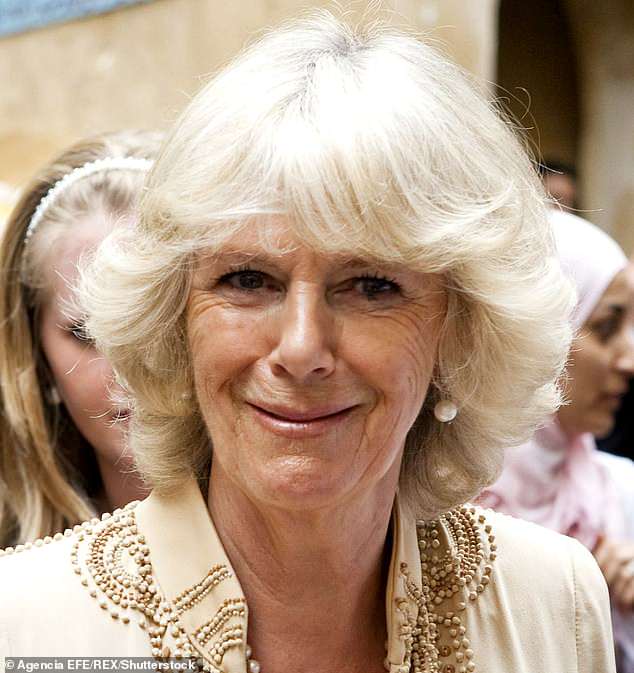 Poetry was very much a part of Camilla, Duchess of Cornwall’s childhood

She laughed and agreed.

‘At school, I had a Scottish teacher who got me into Burns.

‘My heart’s in the Highlands,

‘And a wonderful teacher who read to us from Chaucer’s Canterbury Tales.’

Her favourites from her schooldays include Christina Rossetti, Walter de la Mare, John Betjeman (of course), but not Byron.

‘But I love the poetry of Oscar Wilde. I still read Wilde.’

The poems that have stayed with the Duchess are ‘the poems with rhyme and rhythm’.

‘This is the night mail crossing

Bringing the cheque and the

Letters for the rich, letters for

The shop at the corner, the girl

Can she remember the first poem she learned as a girl? ‘Oh yes, definitely, Matilda’ — one of Hilaire Belloc’s Cautionary Tales designed ‘for the Admonition of Children between the ages of eight and 14’.

‘Matilda told such Dreadful Lies, It made one Gasp and Stretch one’s Eyes’ . . . I think I was made to learn it because of some fib I’d told. I can still remember most of it.’

I put the Duchess to the test and she managed a good few lines, without resorting to the copy of Belloc she’d brought with her.

‘It’s not so easy when you’re under pressure. I knew it all last night,’ she told me.

‘It’s much easier for you because you’re an actor.’

Only now and then; but I do know someone who is indisputably the real thing, so leaving the Duchess (more of whom later), I went on to see Dame Judi Dench.

I found her in her country garden, enjoying the late summer sunshine, sitting with a friend who was helping her learn her lines for her next screen role.

She was in a happy mood and, though it was only mid-morning, generously offered me champagne (which I declined) and an avocado (which I accepted: I am on a low-carb diet).

What was the first poetry Dame Judi had learned by heart? Was it A A Milne? Or Hilaire Belloc? Or Edward Lear?

‘Oh, no. It was Shakespeare. Even when I was very little, I knew lots and lots of Shakespeare.

‘I don’t know if I understood much of it, but I loved it.

‘I learnt lots of Shakespeare when I was a girl: the plays, the sonnets. I can give you lots of sonnets — and I can do all of Twelfth Night and all of A Midsummer Night’s Dream, every word, I promise you.’

I believe her. Her love of Shakespeare is palpable. ‘My sight’s going now,’ she said. ‘If we had to go on stage now and read a sonnet, you’d have it written on just one page, but for me the print would be so big I’d need 14 pages.’ She laughs, but she’s not joking.

‘Now I learn my lines with my friend, Pen. She reads me the lines and I repeat them. I can’t drive any more and I find that difficult, but I manage. But I couldn’t live without Shakespeare.’

Dame Judi has reams of poetry in her head and, like the Duchess, agrees that it’s the stuff with rhythm and rhyme that’s easiest to remember.

‘Shakespeare’s verse goes with the beat of your heart,’ she says —and she’s right.

Which brings us to the science — and the important bit.

In the Memory Laboratory at Cambridge University’s Department for Neuroscience in Education, I found Professor Usha Goswami. With an Indian father and German mother, and clearly a bit of genius herself, she’s doing extraordinary work that one day may help find a cure for dyslexia.

Her research provides measurable proof of what my gut instinct has long told me: as you start out in life, having your parents recite poetry and sing songs to you will help you with your linguistic skills; as you grow older, learning poetry will, without question, keep dementia at bay.

You will find the detail in her learned paper, A Neural Basis For Phonological Awareness? An Oscillatory Temporal Sampling Perspective, published by the Association of Psychological Science.

Professor Goswami has been studying what goes on inside the brains of babies and young children — measuring the neural oscillations (the brainwaves as it were) that encode the signals through which we begin to learn and understand speech.

The metrical structures and rhythmic patterns of nursery rhymes coincide with the brain’s neural oscillations — starting with a trochaic rhythm (as in the beat of ‘The cat sat on the mat’) and quickly going on to the rhythm of the iambic pentameter (as in Shakespeare’s verse) which explains why Dame Judi Dench could quite easily have been spouting Shakespeare from the age of three or four.

The professor and her team can measure the speech-sound awareness of babies, toddlers and young children and, on the basis of the data, accurately predict speech, reading and (wait for it!) even spelling development. Never mind the scientific gobbledygook, what the professor’s studies establish is that the more you recite poetry to your children — before they are born as well — the better they will be able to communicate, both when it comes to spoken and, later, even when it comes to written language. It’s amazing stuff.

Why do we remember best the poems we learnt as children, I asked the professor?

‘First in, last out, is the principle of it,’ she explained. And why is the stuff we’ve learned later more difficult to recall?

‘It’s all still in there,’ she said, reassuringly. ‘It’s just sometimes difficult to retrieve because there is so much in there.’

The brain is a computer into which we are loading more and more stuff as the years go by. Those ‘senior moments’ occur not because we have lost anything but because it has been temporarily mislaid. It’s a retrieval issue, not a memory one. Concentration should be able to bring it back.

‘At whatever age you are,’ according to the professor, ‘you still have the capacity to learn new things if you put your mind to it. There’s no shortage of brain cells as you grow older.’

According to the scientists at Columbia, gradual mental decline ‘is not the inevitable process many of us think it is’.

They found this after counting the number of new cells growing in the hippocampus — the part of the brain that processes memories and emotions. They found that around 700 brain cells were created each day even in the oldest people they studied, and that there was no difference in the hippocampus in young and old brains.

Back at Cambridge University, Professor Goswami is unequivocal: learning poetry by heart is good for the brain.

‘You’ve got the keep the brain active. The exercise and discipline of learning a poem by heart is certainly going to help keep dementia at bay,’ she says.

Did you hear that? There is no excuse. If you want to do it, you can. The great actress Dame Sybil Thorndike lived into her 90s and made herself learn a new poem every day of her life to keep her brain active.

Dame Judi Dench, 83, is learning hers for her next film. Dame Maggie Smith, 83, has just learnt hers for the Downton Abbey film she’s currently making. And my friend Nicholas Parsons, 95 next month, is not only as razor-sharp as ever on Radio 4’s Just A Minute, he is also touring with a one-man show about Edward Lear in which he recites poem after poem after poem after poem — and doesn’t hesitate once.

Learning poetry by heart will make you a better parent and give you a longer, mentally-active life. Fact.

The Duchess of Cornwall agrees.

‘It helps young children with their language skills and that’s wonderful, too.’

According to everyone I met making my radio programme, the poems that are easiest to learn are ones with a strong rhythm — and ones you have a feeling for.

‘You’ve got to love the poem you want to learn,’ said Michael Rosen.

For her part, Professor Goswami explained that you need to learn your poem by saying it out loud. Hearing the words and feeling the rhythm are important.

Pick a poem you like and speak it out loud, then learn it, repeating it line by line, in the shower, in the kitchen, in the car or out of doors when you are on a walk.

I have seven grandchildren and for Christmas I want each of them to learn a poem for me. Michael Rosen suggests Benjamin Zephaniah’s ‘Be nice to yu turkeys dis Christmas’; Dame Judi hopes at least one of them tries a Shakespeare sonnet; the Duchess recommends any of Hilaire Belloc’s Cautionary Tales.

It will be a challenge, but if they manage it, the poems they will learn will be with them for the rest of their lives — good companions jostling around in the rattle bags of their minds.

And if the grandchildren can do it, so can the grandparents.

Whatever your age, for the sake of your mind learn a poem by heart before Christmas.