A baby boy who was given just weeks to live after he was born prematurely to a heroin-addicted mother is now thriving against all odds.

The tot needed a ventilator and tracheotomy tube to help him to breathe and eat.

He had been abandoned at a hospital in Indiana and was then taken to a medical facility where he received care.

However things took a positive turn for the brave toddler after a lady named Kelly Lively heard about his tragic story.

Lively, 56, works as a nurse and was volunteering with sick children when she overheard a case worker talk about Marcus.

She immediately knew she wanted to meet him after being struck by the youngster’s plight.

Mother and son met for the first time in February 2017 at a medical facility in Shelbyville where Marcus was being treated through the Indiana Department of Child Services.

A few months later, he left the center to live with Lively in her home on the south side of Kokomo. In December, Lively, 56, officially adopted Marcus as her child.

She told Kokomo Tribune:  ‘He smiled so big when I kissed his cheek, and I knew I was going to do everything I could to give this baby a chance. 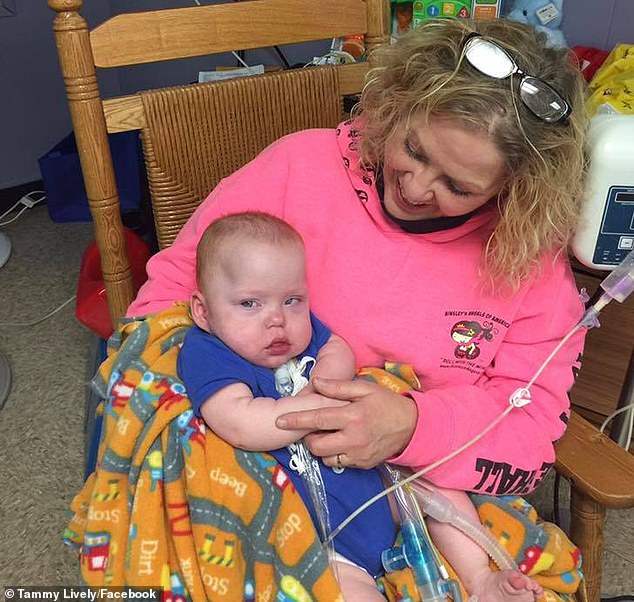 Baby Marcus was born three months prematurely to a heroin-addicted mother and weighed just one pounds. He has several medical conditions and needs a ventilator to breathe

‘In my heart, I felt he had just been waiting for me. It gave me chills. I knew he was my son.’

Marcus was 18-months-old when he came home to live Lively. At that time he could barely lift his head or hold anything and his eyes couldn’t focus.

He also never wanted to be touched, having spent more than a year in a medical facility where he was accustomed to little human interaction.

Before he came to live with Lively, doctors said Marcus only had a 30% chance he would live to see his second birthday.

But Lively claimed: ‘He’s beat the odds. He’s been so successful. Marcus is truly a miracle. The doctors have said the same thing.

‘They said, “Whatever you are doing for this child, keep doing it.” They can’t believe it.’

Lively claimed she wanted to find joy again after nursing her mother through cancer and she had lost her father eight years previously.

She traveled to Florida to volunteer with the Make A Wish Foundation to take care of medically fragile children.

She was at a house where she was caring for a terminally ill child, who was being overseen by the Department of Child Services.

She then overheard the child’s case worker talking to a foster care worker. They spoke about Marcus, claiming he was very sick and may die soon. 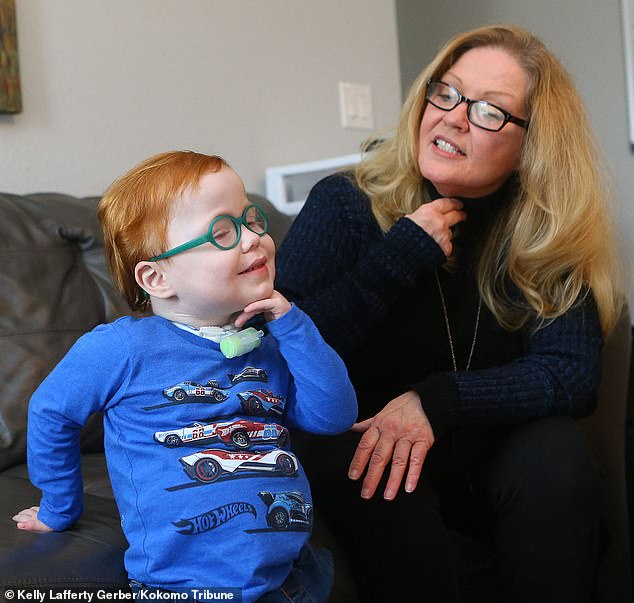 Before he came to live with Lively, doctors said Marcus only had a 30-percent chance of living beyond his second birthday 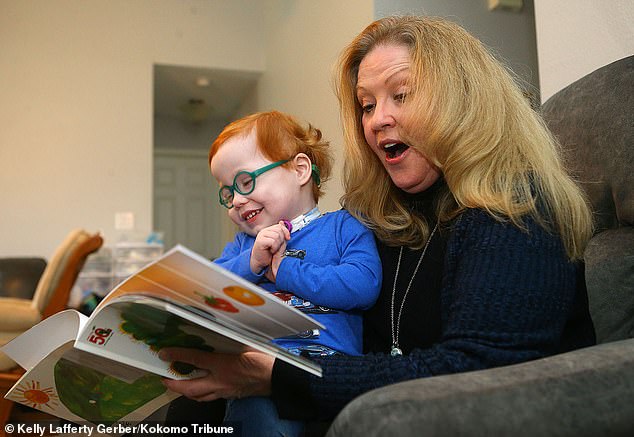 She added: ‘They told me that no one wanted him. That just broke my heart. These kids deserve a loving home as much as the next.

‘They can’t help they were born with disabilities or born early. I couldn’t allow Marcus to just end up in an institution.

‘The same day that broke my heart when I lost my mom was the same day I met my joy. I know that God brought us together.’

When she took him home, Marcus couldn’t speak, so Lively started teaching them both sign language. It took months before Marcus finally started picking up a few basic signs. 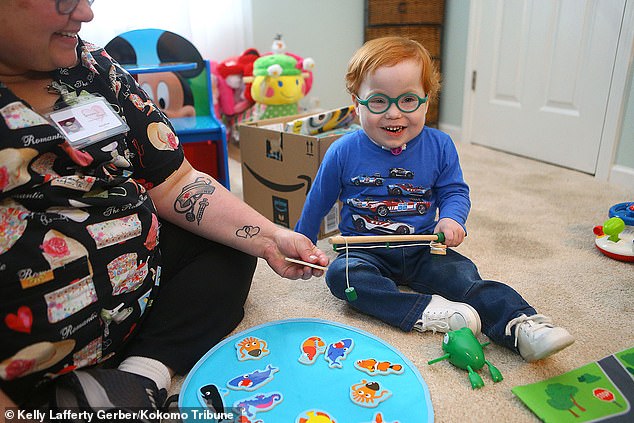 When Lively adopted him, she took a course in specialized care to look after Marcus, who is now three-years-old and is thankfully thriving with his new mother at home in Indiana 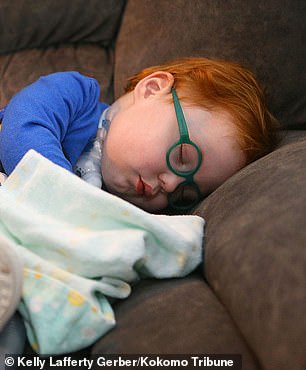 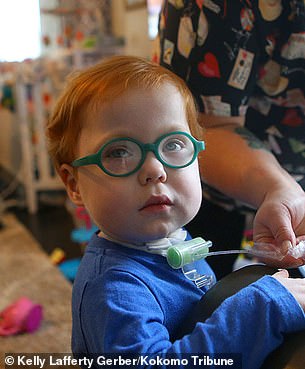 Once he knew how to say ‘yes’ and ‘no’,  she started asking him if she could hold him or touch him.

It was ten months later that Marcus, for the first time, fell asleep on Lively’s lap.

She explained: ‘It was exhausting. But it was exhausting in such a beautiful way. That’s because I could see him making progress, and that energized me and spurred me on. I knew he had it in him to do well and succeed.

Marcus is now a happy, healthy three-year-old little boy who loves to read. He still needs a tube to breathe and can’t speak, but he can say more than 100 words through sign language. 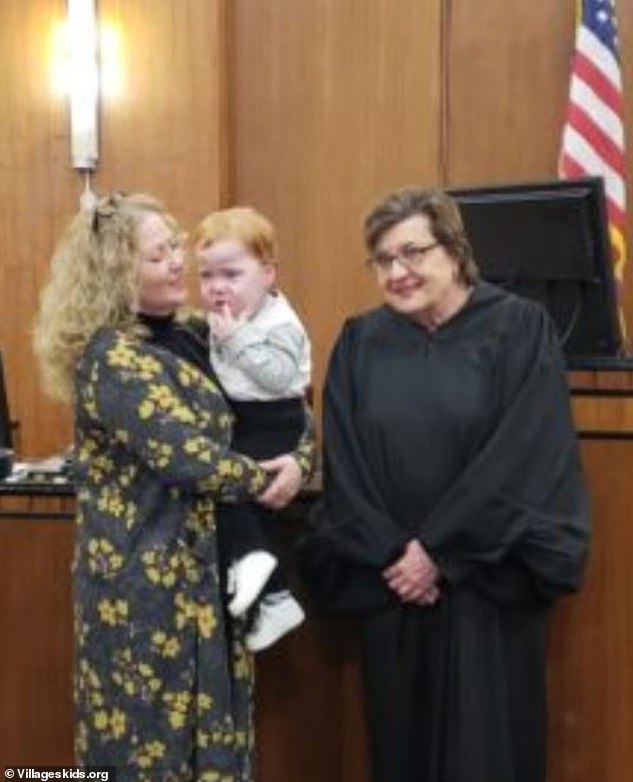 In December, the 56-year-old nurse officially adopted Marcus as her child (pictured) and she said she is determined to give him a good life despite his physical challenges 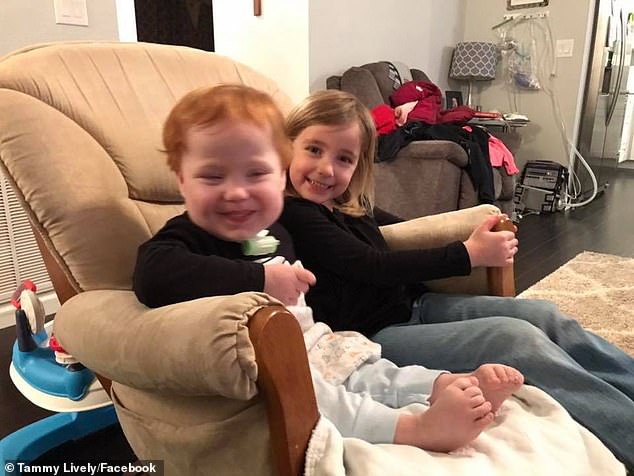 Lively still works full time as a nurse, but she’s able to do her job from home. She and Marcus both sleep at the same time and she gets groceries delivered to the house.

She’s already doing in-home preschool lessons with Marcus, and he’s quickly learning his shapes and colors. She hopes to send him to kindergarten to be with other children providing he is well.

‘I told the doctors I wasn’t going to place any limits on what he could do,’ Lively told the Kokoma Tribune.

‘Marcus was going to place his own limits. He’s not aware that he has any disability, and that’s just the way I want it.’

Livesly explained that she was never able to have children. She began the specialized training to become medically certified to take Marcus home.

She is determined for Marcus to have the best life he possibly can despite the challenges he faces.

She added: ‘He’s the greatest joy of my life. ‘It’s a lot of tears and a lot of sleepless nights and mixed emotions, but it’s worth it. It’s so worth it.’