The RIDICULOUS excuse one couple gave police for crossing border

The RIDICULOUS excuse one couple gave police after being slapped with a $1,000 Covid-19 fine for driving ‘hundreds of kilometres’ from Victoria to NSW

A couple who drove hundreds of kilometres from Victoria to New South Wales claimed they were going to recycle cans.

Police did not believe them and gave them with a $1,000 fine for breaking coronavirus restrictions.

A couple who drove hundreds of kilometres from Victoria to New South Wales claimed they were going to recycle cans.

He said: ‘Overnight, there were around 15 additional tickets written for non-isolation.

‘Most were individuals again who had multiple warnings, one was a couple that had driven hundreds and hundreds of kilometres from Victoria into New South Wales to allegedly recycle cans.’

Five more residents at Newmarch House care home in western Sydney have been diagnosed with the virus after a nurse worked for six days with the disease.

Working with a ‘scratchy throat’, she unwittingly passed the disease to nine residents and five colleagues and is ‘mortified’.

The National Cabinet will meet today to discuss how to lift restrictions, including getting schools back up and running.

Scott Morrison will lead the meeting with state and territory leaders, some of whom are maintaining strict advice about keeping children at home during the coronavirus pandemic. 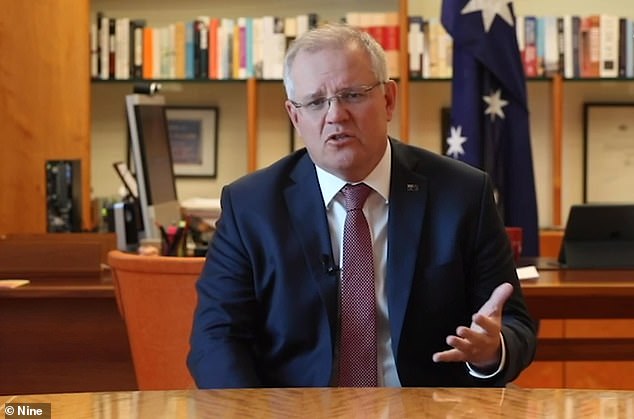 Mr Morrison is worried about too many students being forced into distance learning.

‘I’m very concerned about the quality of education that’s going to be delivered to our kids this year,’ he told 6PR radio.

Deputy chief medical officer Nick Coatsworth says the leaders will look at how to make schools safe, but added that won’t include teachers being made to wear personal protective equipment such as face masks.

He said there were 136 coronavirus cases, or about two per cent of all cases, in Australians aged between five and 18-years-old.

‘It quite clearly affects a lower proportion of children,’ he told reporters in Canberra.

The federal government is also working on an app to track people’s movements that could quickly help trace contacts of those newly diagnosed with the virus.

Singapore, where about 20 per cent of people have signed up to the app, has provided coding information to Australia for development.

Treasurer Josh Frydenberg discussed the state of the global economy again with his G20 colleagues overnight.

Mr Frydenberg stressed the need for government to coordinate economic policies, and for central banks to synchronise their actions on monetary policies.

He also reiterated calls for borders to remain open to allow the free flow of urgent medical supplies and equipment needed to fight the pandemic.

The International Monetary Fund expects the Australian economy to shrink by 6.7 per cent this year, more than double the global rate, amid the coronavirus crisis.