The rise of the Netflix face!

A leading psychologist has revealed how streaming services such as Netflix have come to cast leading women with ‘angular, feline’ faces in leading roles as the shape shows ‘power and control’ and ‘creates a distinct personality’ with viewers.

The Queen’s Gambit, Sex Education and Squid Game are some of Netflix’s biggest shows of 2021 – with millions of viewers tuning in.

But it’s not just rave reviews and viral fame the shows share – all their leading ladies have angular cat-like looks with a small nose and raised brows.

Dubbed ‘the Netflix face’  the phenomenon is down to psychology in how the mind perceives and records facial recognition – it’s also favoured by producers, as it works well on smaller screens because angularity provides contrast and works well with make-up free skin giving the appearance of a more realistic scene, a leading aesthetics doctor has claimed.

Stars with the look include Emma Mackey, 25, who plays Maeve Wiley in Sex Education – Anya Taylor-Joy, also 25, who wowed audiences in The Queen’s Gambit and HoYeon Jung, 27, who won critical acclaim for her debut as Kang Sae-byeok in Squid Game. 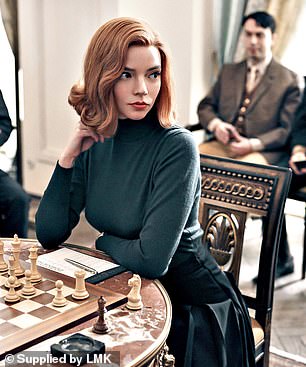 A leading psychologist has revealed how streaming services such as Netflix have come to cast leading women with ‘angular, feline’ faces in leading roles as the shape shows ‘power and control’ and ‘creates a distinct personality’ with viewers. Stars with the look include Emma Mackey, 25, who plays Maeve Wiley in Sex Education (left) – Anya Taylor-Joy (right),  also 25, who wowed audiences in The Queen’s Gambit 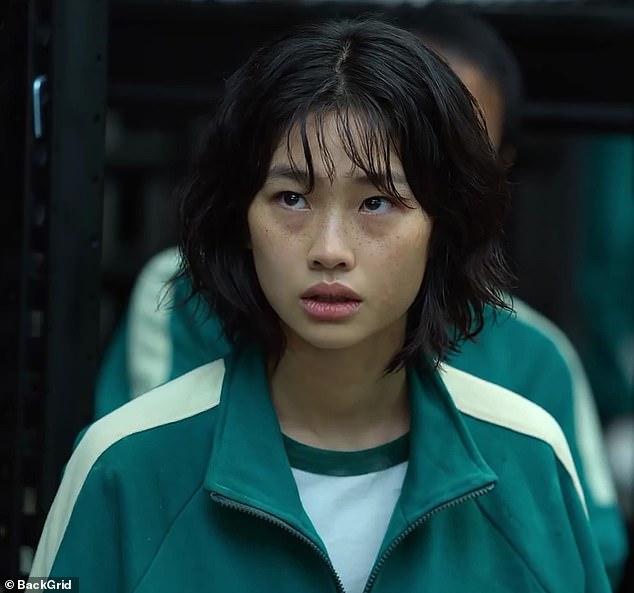 He added that the shape – also popular with surgically enhanced models like Kendall Jenner, Bella Hadid and Emily Ratajkowski – is key to success in front of the camera because people are drawn to the look which has become a major trend in modern beauty.

Meanwhile,  Dr Martin Nimmo, a leading aesthetician and founder of The Nimmo Clinic added that it’s a face shape also reflects your personality and ‘that those with high cheekbones and dominant jawlines were found to have characteristics such as showing power and being in control’.

‘Females with higher cheek bones and strong jawlines are more likely to conform to the “golden proportion” a mathematical ratio of natural aesthetic beauty running through nature and art,’ he added.

‘This will make them look more attractive and feminine. The strong jawline also gives an air of authority to these leading female roles and it’s great to see the rise of strong female leads across these Netflix series.’

Aaron agrees adding that the way the mind receives and records modern facial recognition is favourable to more angular faces because they are ‘scientifically proven to be beautiful. 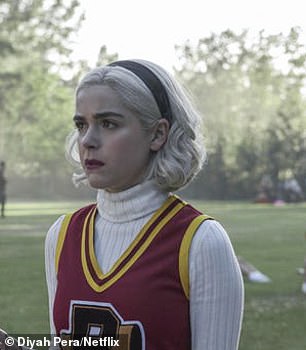 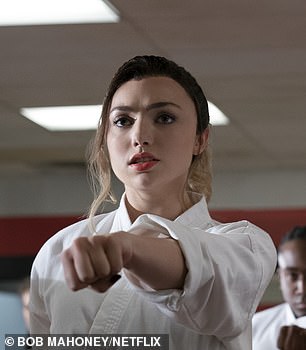 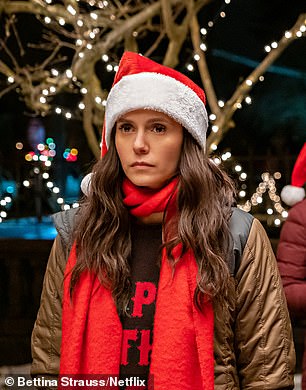 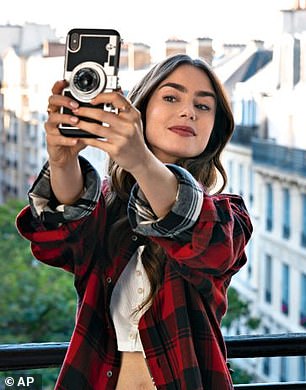 ‘An angular face usually has prominent eyes, wide cheekbones, a broad forehead and a pronounced jawline,’ he explained.

‘Beauty and physical symmetry constitutes as part of what is seen as a “beautiful and striking” face. It is scientifically proven to be amongst the most beautiful face shapes.

‘There is therefore little wonder why stars such as Anya-Taylor Joy, Jung Ho-yean and Emma Mackey have landed themselves big roles as the composition of their facial features helps capture attention and focuses the viewer on their expressions.

‘Physical attractiveness creates a powerful first impression on the mind. The psychology behind choosing an actor who has this particular face make up may be strategic by the director but it may also be down to chance.

‘The casting team may be selecting this type of face shape because most people are drawn in naturally to the beauty and there is a familiarity about them.

‘This helps connect with the audience as they feel like they know the actor personally. 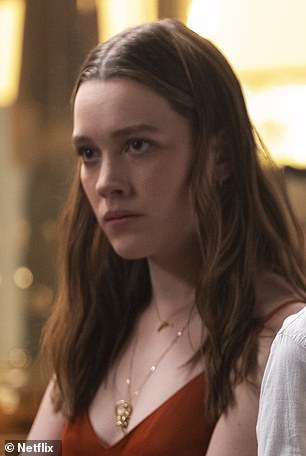 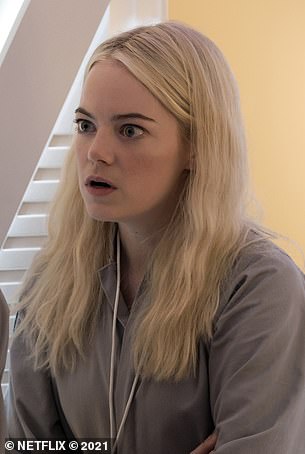 Victoria Pedretti – who starred in three Netflix Original series, The Haunting of Hill House, The Haunting of Bly Manor and You (left) has a ‘Netflix Face’. Pedretti has a doppelganger in Emma Stone, the Oscar-winner who Netflix scooped up for their miniseries Maniac (right) , where she plays Annie Landsberg, a woman with borderline personality disorder who undergoes a drug trial 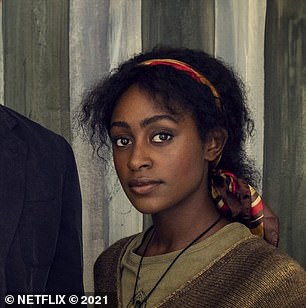 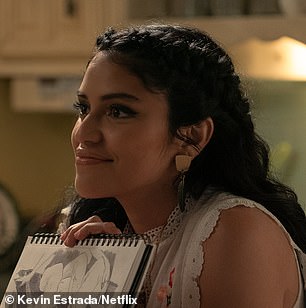 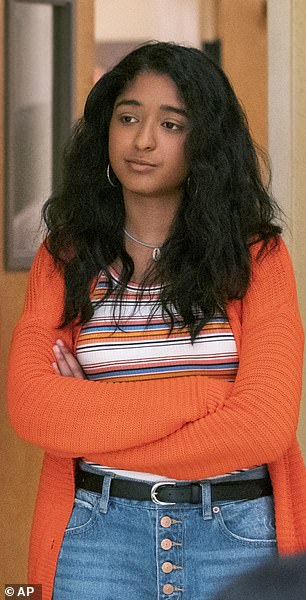 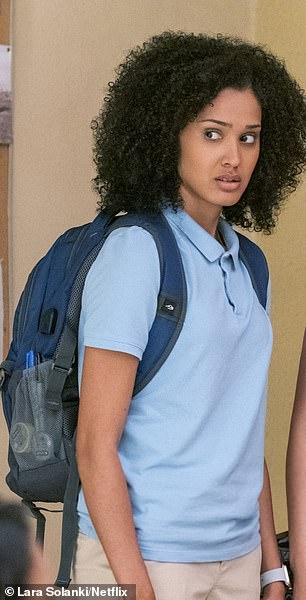 ‘When we find someone attractive, signals go to our brains and we feel a broad range of emotions such as admiration, fascination and awe.

‘This is why we are seeing what is being known as a ‘Netflix face’ with or without realising it’.

The surgical enhancements to get a ‘Netflix face’

Harley Street doctor, Dr Frati said: ‘Feline beauty is held in high regard as being sexy and youthful, not many are born with such characteristics, but there are ways to help achieve them with a combination of surgical and non surgical treatments;

For the eyes – canthoplasty procedures can lift the corner of the eye. A blephroplasty can widen the eye and a brow lift will pull the brow up into the forehead vertically.

For the lips – a lip lift will open the mouth creating a seductive pout, lip fillers can define lips.

For the jaw – FaceTite and Morpheus8 will tighten the skin, Vaser liposuction will remove fat and a lower facelift will snatch the jaw and define.

The look is associated with leading ladies – and often those who are powerful roles – rather than the damsel in distress, a common trope in 20th Century cinema.

In Sex Education, Maeve Wiley is the resident ‘bad girl’ who looks fends for herself while still in secondary school because her drug addict mother abandoned her.

Meanwhile, Anya Taylor-Joy’s protagonist of the Queen’s Gambit Beth Harmon, is an orphan who becomes a world champion chess player.

Similarly,  HoYeon Jung’s Squid Game character is a North Korean-defect who competes in the deadly game to get money for her family.

And they’re not the only characters with high cheek bones, and small noses.

Pedretti has a doppelganger in Emma Stone, the Oscar-winner who Netflix scooped up for their miniseries Maniac, where she plays Annie Landsberg, a woman with borderline personality disorder who undergoes a drug trial.

‘I first remember seeing the feline beauty type in Carmen Electra, in around 1995.

‘This look has shaped ‘ beauty’ today and actresses who possess the ‘Netflix face’ are extremely sought after.

‘This look is becoming increasingly popular, clients are coming to our office wanting to achieve this look every day.’ 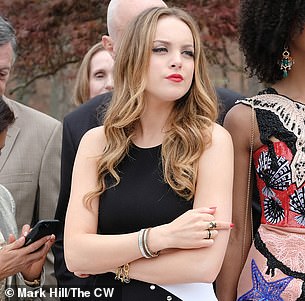 Abigal Cohen of Fate: The Winx Saga (left) and Elizabeth Gillies who stars in Dynasty (right) both have the ‘Netflix face’ 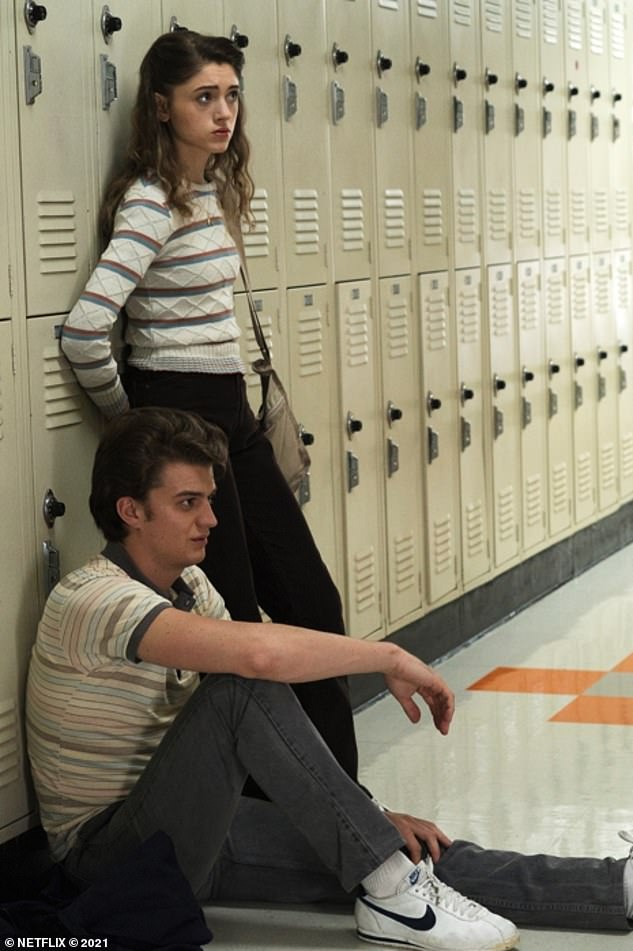 Fellow Harley Street  aesthetic doctor, Dr David Jack, added that the Netflix face works particular well on smaller screens – such as phones and laptops – which is where much of the streaming services traffic comes from.

What is so attractive about the Netflix face? Harley Street doctor reveals it’s because it’s ‘ultra feminine’ and

Dr Galyna of the Dr Rita Rakus Clinic in London, explains: ‘Over the years aesthetic medicine saw a number of trends, let’s agree, some absolutely bizarre.

‘On a more scientific note, large volume of studies looked into correlation between facial features and levels of attractiveness. Focus lies on feminine traits, sexual dimorphism (difference between male and female face), symmetry, and averageness. When it comes to jawline, strong angular face was in fashion on Hollywood film sets not so long ago.

‘Researchers agreed that, even though there is a variation on the width of the jawline, in general narrow-angle jawline is considered a feature of attractiveness in women.

‘In fact, this was agreed by men and woman (Samizadeh S Et al 2019). It is no wonder that a number of cosmetic procedures focus on slimming of the mandibula angle, ranging from botulin toxin injections to actual plastic surgery to shave off the bone.

‘In my opinion, having been bombarded with lateral photos of before and after jaws on social media, a narrower angle of the jawline is a more natural look that doesn’t require aesthetic enhancement.

‘More importantly, no matter what your facial features are, definition and healthy looking skin is the key! So I suggest we all chase that glow! And it’s easier to achieve with noninvasive treatments and skincare.

‘Over the last few years, both social media and streaming TV services such as Netflix has exposed us to more diverse faces, with a more angular and slimmer face shape appearance seemingly becoming more commonly seen in the big stars, on screen and on our phones,’ he explained.

‘Since younger people are the largest users of these platforms, I think there has been a move towards actresses who have more petite but angular faces, with the focus on healthy-looking skin with minimal makeup.

‘The example of Joon Ho-yeon is an excellent example of this, particularly as society is finally embracing the importance of ethnic diversity in mainstream media.

‘This face shape also works well on screen as it is interesting and works well with screen light, the angularity providing contrast and the un-madeup skin giving the appearance of a more realistic scene.

‘I also think that this sort of face shape works well when actors are playing characters at different ages, as the strong bone structure provides a good base for makeup to age or reduce the age of the character, as this angularity and contrast will be maintained more or less throughout life.

‘These types of features tend to fit in many different roles or characters,  when they smile it lights up the screen, and when they are angry its sparks fire.

‘They can transform in an instant. Hence feline angular faces are meant to be attractive , and due to there clean-cut features they tend to have a strong , sexy personality and aura .

‘As a facialist and with a background of being a makeup artist, I would say feline face actors, need very little effort to prepare for the shoot and with less on photoshop or airbrushing photos,’ she went on.

The look is perhaps a step away from the classic beauty of cinema’s past, and the look associated with the likes of Marilyn Monroe,  Sienna Miller and Blake Lively, but it’s set to become a timeless trend.

Dr Ross Perry Medical Director of Cosmedics Skin, adds:  ‘All the faces have a fairly angular profile which means that they have relatively high cheekbones and wide open eyes but then also a slimmer jawline and this is often not a classical beauty sort of shape.

‘However it can be very useful for creating distinct personalities and characterisations of certain people I wouldn’t go as far as to say it looks quirky but it is certainly different yet not unattractive and I think the facial structures for these suit their roles that they have been chosen for.

‘Classical beauty typically tends to have a more proportioned face in terms of where the cheekbones are in relation to the nose and the jaw are and that would often tend to gives more of an attractive appearance.