As the ball fizzed through the air and thunked into the back of the net, it sealed England’s progress to the World Cup semis — and stardom for the defender behind the stunning goal.

So it’s hard to believe that 27-year-old Lucy Bronze, described this week as ‘the best player in the world’ by manager Phil Neville, once dreamed of being an accountant — or had to work at Dominoes Pizza to make ends meet while in the England under-19 squad, playing in the Euros.

As her mother Diane, 60, a maths teacher, said: ‘The lads she was working with couldn’t believe she’d won something like that and was still working there.’

Lucy’s journey to England glory started aged three when she began kicking a ball with her older brother Jorge at their home in Alnwick, Northumberland. She fell in love with the sport and was the only girl in the local boys’ team.

She says. ‘It became clear quite early on that I was better than a lot of the boys, so they’d be jealous and would tackle me even harder, but that just toughened me up.’

Along the way, Lucy’s skills were also sharpened by the fact she lived on the same street as England team-mate Lucy Staniforth. At 12 and 11, they’d film each other on their phones copying soccer skills from the Nike ads.

It’s hard to believe that 27-year-old Lucy Bronze, described this week as ‘the best player in the world’ by manager Phil Neville, once dreamed of being an accountant — or had to work at Dominoes Pizza to make ends meet while in the England under-19 squad, playing in the Euros

Aged 12 she was told that FA rules meant she could no longer play as a girl on her team Alnwick Town and her coach begged her mother to find a girls’ team.

However, at 16, she might have ended up in different colours after the Portugal women’s team sent her parents a message on Facebook asking if she’d like to try out for them, as her father Joaquim is from Lisbon.

A serious knee injury in 2009 also almost derailed her career, and at one point it was feared she’d lose her leg. After training with Sunderland Women’s side she joined Manchester City Women in 2013, the same year she won the first of 73 caps for England. While many have pointed out the huge pay gap with the England men’s team, Lucy says she feels sorry for her male counterparts. ‘We see the media pressure they come under. We’ve had jobs and studied, they have to give up everything from 12 or 13. We won’t ever make as much as them, but it’s amazing how much the women’s game has grown.

‘When I went to my first FA Cup final, we had to pack bags in Tesco to raise enough money for a bus to London.’

While further football glory beckons, Lucy may yet go back to the career she considered as a little girl. Speaking two years ago, she said: ‘I want to go back to school, get my masters, and do the accountancy thing at last. You know, get back to the dream. The real dream, that is, not the football dream.’

But now it looks like Lucy is helping to make that football dream a reality. 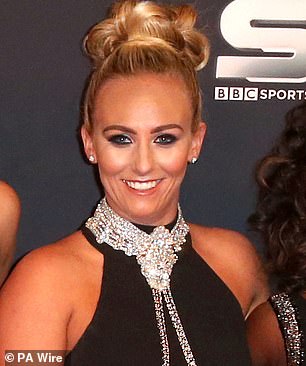 Toni, 27, from Liverpool became the first English player to be signed by Barcelona since Gary Lineker

In 2017 Toni, 27, from Liverpool became the first English player to be signed by Barcelona since Gary Lineker.

It’s a long way from her start in an under-eight team known as the Jellytots. On salaries, she says: ‘When people ask me: “Should I earn the same money as the men?”

‘No, I don’t, because they’re on a bigger scale than me, they have more fans, are more popular. I believe the girls should be better paid but not the same as the men.’

A fan of social media, she regularly shares snaps of her and her boyfriend on Instagram.

Ellen, 30, started in football because her father Jon ran a soccer academy in Aylesbury, Bucks, and was scouted aged eight. She’s now a forward for Manchester City,

As the World Cup’s joint top-scorer, with five goals so far, viewers love her trademark ‘goggles’ celebration. She’s a fan of Cologne striker Anthony Modeste, who celebrates the same way.

Ellen lives in Nottingham with husband, Callum Convery, a sports development officer for the FA.

She says: ‘If we have a knock around together, he usually ends up in goal.’ 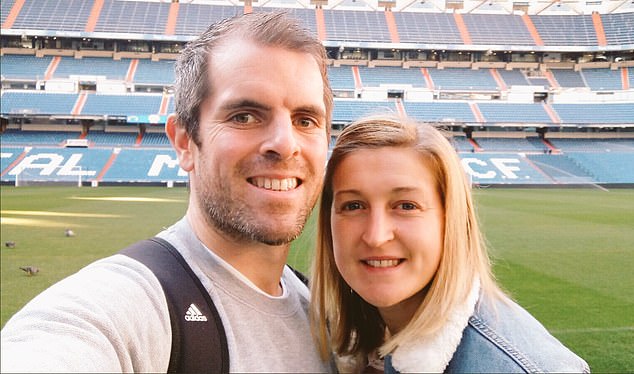 Ellen lives in Nottingham with husband, Callum Convery (pictured together), a sports development officer for the FA 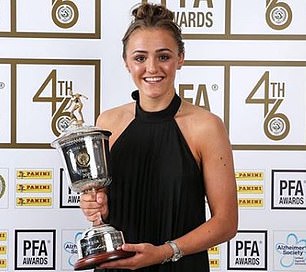 Georgia Stanway is the current PFA young player of the year

Current PFA young player of the year (she is pictured with the trophy), at three she was already training with her siblings’ under-7s team.

From the start, Alex, 25, says she knew she was as good as boys, who respected her talent, and loves inspiring young girls.

The Man Utd player says: ‘My concern is not that man who thinks I should be in the kitchen. My concern is for a little girl who should be playing football.’ 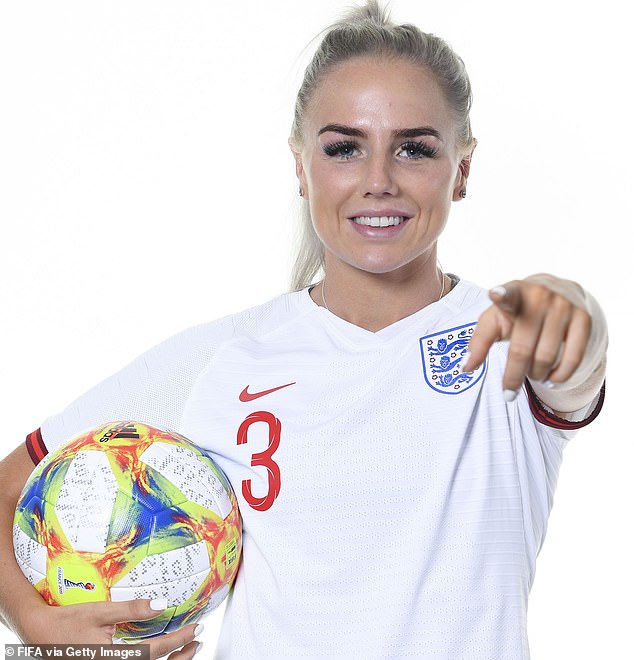 Alex Greenwood, 25, says she knew she was as good as boys, who respected her talent, and loves inspiring young girls 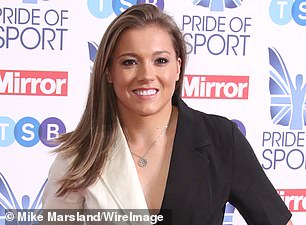 The Chelsea forward, 25, was just 14 when her mother Denise died of a brain haemorrhage.

England’s victory over Argentina was on the 8th anniversary and Phil Neville gave her a big hug after the match.

After her mother’s death, Fran gave up football for two years. But she rediscovered her love of the game at 19. She joined Chelsea not long after.

Determination clearly runs in the family for this 25-year-old forward from Toxteth, Liverpool: her half-sister is Olympic boxer, Natasha Jonas. She finished a degree in Sports Development last year and plays for French club Lyon.

Nikita is known as the joker of the squad. ‘I would say the best one was putting salt in (coach) Phil’s tea instead of sugar. He took a big sip and spat it out like: “Urgggh, was that you?” He knew straight away it would be me.’ 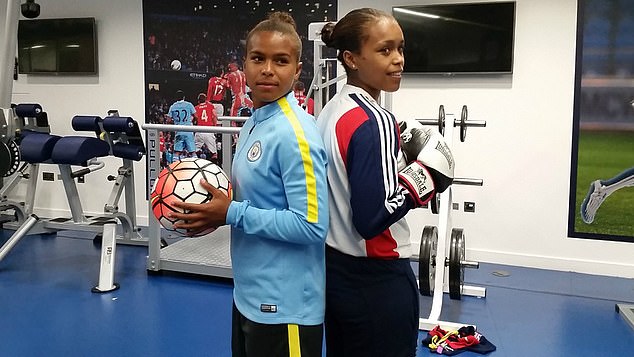 Determination clearly runs in the family for Nikita Parris, 25, from Toxteth, Liverpool: her half-sister is Olympic boxer, Natasha Jonas 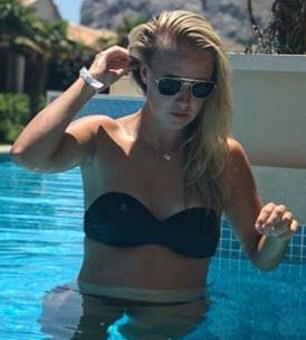 Beth, 24, joined Middlesbrough’s centre of excellence football academy at the age of ten.

Her mother, a teaching assistant, worked an extra job to pay for the petrol to take her to training sessions.

Two years ago, the Arsenal player escaped tragedy when her car spun around three times and hit a lamp post after she swerved to avoid hitting a deer on the way to training.

Two days later, she scored a hat-trick against Chelsea. Phil Neville describes her as: ‘The nicest girl in the world.’

This England captain kicked her first ball at three, and grew up with posters of David Beckham on her wall. As a 14-year-old, she also drew inspiration from the 2002 film Bend It Like Beckham.

She nearly didn’t make it to this World Cup, because of husband’s illness. She married ex-Liverpool and Bolton player Stephen Darby in June last year, but just four months later, he was diagnosed with Motor Neurone Disease.

Steph says of the World Cup: ‘I’m here because I feel I’m right to be here and it’s driven by Stephen. He wants me to go.’

She received an MBE in the New Year Honours in 2016 and has played for England over 100 times. 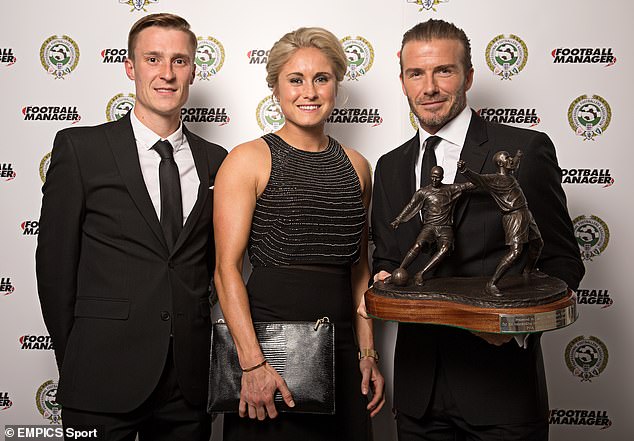 This England captain kicked her first ball at three, and grew up with posters of David Beckham on her wall 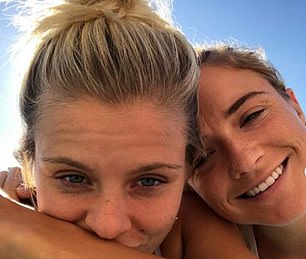 Rachel Daly, 27, lives in Texas and plays for the Houston Dash. She is in a long-term relationship with Kristie Mewis (right)

Defender Rachel, 27, began playing in a boys’ team in Harrogate, North Yorkshire — the only girl in the side — which she says made her tough. After stints for Leeds United and Lincoln Ladies, she moved to America to take up a sports scholarship.

She lives in Texas and she plays for the Houston Dash. She’s in a long-term relationship with team-mate Kristie Mewis, 28.

Kristie is the sister of U.S. team star Sam Mewis.

Her 5ft 11in height has earned Jill the nickname ‘Crouchy’ after 6ft 5in striker Peter Crouch — and the 32-year-old has even performed his celebration robot dance.

Playing in boys’ teams as a a child, the Man City mid-fielder says boys’ parents used to shout ‘kick her!’ to stop her showing their sons up.

She says: ‘I’m always joking off the pitch but I’m very competitive on it.’ 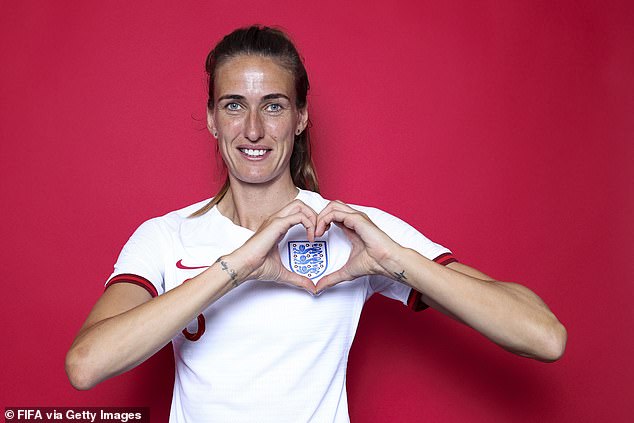 A childhood in California meant Karen grew up wanting to be a whale trainer. She qualified to play for England because her parents are originally from Stockport.

The 5ft 11in Man City player (pictured, right, with Ellen White on a team bonding weekend) landed a three-match ban once after punches were thrown with a Birmingham player.

Karen 34, is studying for a Master’s in Sports Directorship. 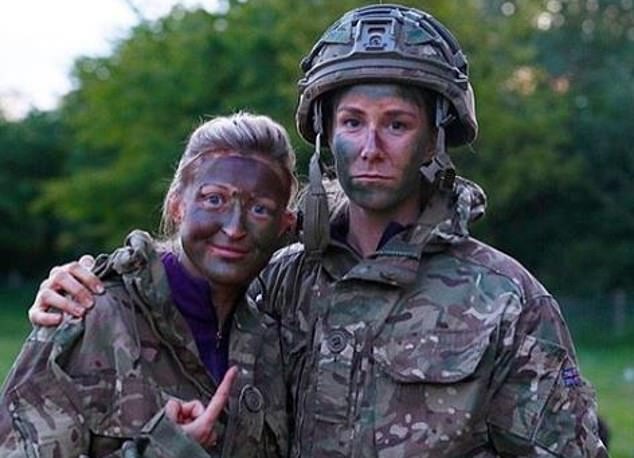 Much of the Lionesses’ success has been put down to the leadership of manager Phil Neville, 42

Much of the Lionesses’ success has been put down to the leadership of manager Phil Neville, 42. Known as the ‘Mr Nice Guy’ of football, he is busy developing his team’s ‘mean streak’.

He’s left star players on the bench while encouraging the women to ‘give each other an old-fashioned b********g’ for shoddy play. But the Bury-born manager is keen to understand his team, using a string of WhatsApp groups to keep abreast of every element in his player’s lives — from their training regimes to the names of their pets.

‘When I first got the job, I wanted to be out there on the grass,’ he said. ‘But I’ve spent much more time finding out what makes my players tick, learning about their families. I need to know all that is happening in their lives.’

As a player — first at Manchester United and later Everton — he represented England 59 times before moving into coaching in 2012 — first with England’s under-21s and later at United. He was appointed head coach of the England women’s team in January last year.

Neville is cheered on by his wife Julie, 43, a nutrition specialist, and they have two children together, Harvey, 17, and Isabella, 15. Harvey recently joined the Manchester United youth team.

Phil’s brother Gary was a United legend, while his twin sister Tracey is head coach of the England women’s netball team.

He asked her if he should take the Lionesses job.

She was unequivocal: ‘You’ve got to. This will be the biggest and best thing you ever do.’