The Romeo reverend who conned his way round the world

The Professor & The Parson: A Story Of Desire, Deceit And Defrocking

Vicars have long walked hand in hand with scandal. In the old days, no Sunday newspaper was complete without a story of a vicar caught in the wrong bed, or in the right bed, but with the wrong woman.

These tales of clerical wrongdoing still pop up pretty regularly. Headlines I’ve culled from the past year or two include: ‘Vicar Filmed Snorting Drugs’; ‘Philandering Vicar Banned Over Affair with Parishioner’; ‘Vicar Dubbed “Randy Rupe” and Female Curate’s Secret Affair Exposed’; and ‘Sacked Sex Scandal Vicar Back in the Pulpit’. 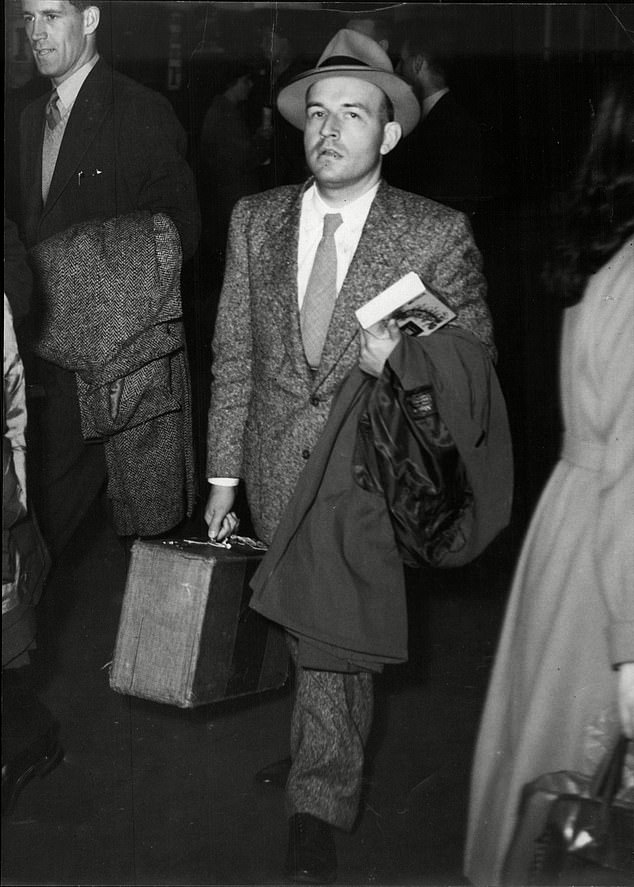 Robert Parkin Peters in 1955. Virtually everything he ever said about his life was a lie 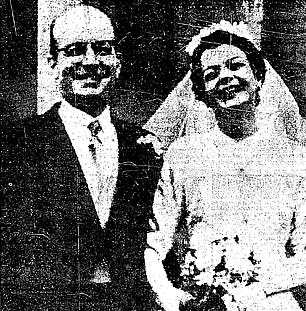 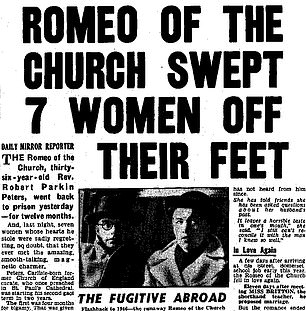 Peters at his wedding to Marie Baillie in 1958 (left); In 1955 Peters was he was the subject of this headline (right)

We still take an interest in the juxtaposition of virtue and vice, and, in the public imagination, vicars still represent old-fashioned rectitude in a way that, say, bank managers or mayors or members of the Royal Family no longer do. But one senses that, with the dwindling of Sunday worship, and the proliferation of the revered celebrity, the golden age of the scandalous vicar is now over.

Virtually everything he ever said about his life was a lie. He was born in 1918, but often claimed to be ten years younger. Within two years of becoming a priest, he had his licence withdrawn. He went on to achieve an amazing variety of clerical and academic posts – Principal of the Anglican Divinity School in Ceylon, Rector of the Anglican church of Virginia in the Orange Free State, Head of Religious Education at Aylestone School, Hereford, Bishop in the Old Polish Catholic Church, to name but a few – virtually all of them by forging letters of recommendation, and boasting of degrees he never had.

He somehow managed to continue these frauds up to his death in 2005, despite the fact that he had been unmasked on countless occasions, and was no stranger to prison. Nor was he a slouch on the sex front: even his meticulous biographer finds it hard to keep up with his marriages – many were simultaneous, and thus bigamous – but they numbered at least seven or eight.

‘Romeo of the Church Swept 7 Women Off Their Feet’ ran one newspaper headline in 1955, after he had been sent to prison for a year for stealing a car, and obtaining an engagement ring by passing a false cheque. ‘Last night, seven women whose hearts he stole were regretting, no doubt, that they had ever met the amazing, smooth-talking, magnetic charmer,’ the story continued.

You might have thought that this publicity would have put an end to Peters’ disgraceful ways, but far from it. On his release from prison, he was immediately employed as a secretary by the trusting Bishop of Birmingham. Peters repaid this kindness by tricking him into putting his signature to a letter he had written himself, saying what an excellent employee he was.

Around this time, Peters contacted Hugh Trevor-Roper, the illustrious Regius Professor of Modern History at Oxford University, to complain that he was being persecuted by the Bishop of Oxford.

For a brief time, Trevor-Roper was convinced that Peters was a victim of injustice, and took up his cause. But he soon discovered that Peters was a fantasist and a fraud who didn’t have the first-class degree from Oxford that he claimed to have, and who, furthermore, had failed the equivalent of A-levels in all three of his chosen subjects. 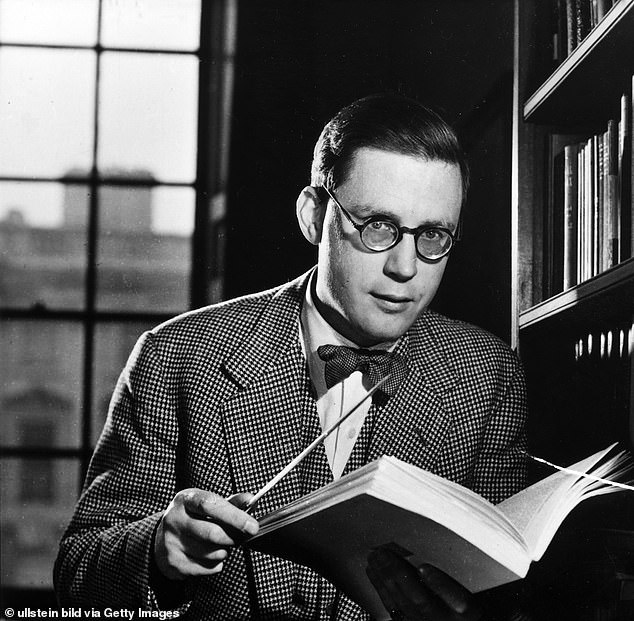 Modern history professor Hugh Trevor-Roper, who kept a file detailing the many hoaxes of Peters

On top of all this, Peters was ten years older than he claimed to be, had been defrocked, and had forged all sorts of letters of recommendation, among them one describing him as ‘a young man of considerable academic brilliance, who should have a most interesting and successful career’.

It took very little digging for Trevor-Roper to find that, as Adam Sisman puts it, ‘Peters was such an inveterate liar that it was impossible to believe a single word that he wrote or said’. From then on, for the next 25 years, he started keeping a dossier, detailing every fresh hoax perpetrated by Peters, assisted by clerics and academics the world over.

One of the most infamous conmen, Victor Lustig, in 1925 convinced a merchant that the Eiffel Tower was to be sold off for scrap.

Trevor-Roper vaguely planned to write a book about Peters, but never got round to it, perhaps deterred by the possibility of Peters taking out a lawsuit against him. He may also have been put off by the terrible humiliation he suffered in 1983 after he had mistakenly verified another, more famous, fraud – the fake Hitler diaries.

He died in 2003. Adam Sisman was in the process of writing his biography when he came across the Peters files. He then discovered fresh material, gathered by other distinguished academics, and decided to write this weirdly compelling, and often very funny, little book about the Professor’s pursuit of the Parson as he skipped from one post to another, fooling hapless institutions, and even more hapless women, the world over.

The two men’s paths crossed only once after their initial meeting. In 1965, Professor Trevor-Roper was attending an international historical congress in Vienna, half-listening to academics droning on about heresy in the 17th century, when, says Sisman, he was ‘startled into wakefulness when the French president of the session called upon “Monsieur le Professeur Peters de l’Université de Manchester” to speak, and looked up, to see his “old friend”, on his feet, ready to commence a learned intervention’.

At this point, the two men exchanged glances: Peters exited the moment the session came to an end. At a reception later, the 47-year-old Peters was in the middle of propositioning Trevor-Roper’s 21-year-old daughter, when he suddenly realised who she was, and nipped away.

Sisman has been a diligent detective, somehow managing to chart Peters’ never-ending trail of frauds from one country to the other. One minute, he is applying for the Chair of Social and Cultural History at the University of Malaya in Kuala Lumpur, the next he is digging out his old dog collar to transform himself into the Principal of St Aidan’s College in Shropshire, telling his students to address him as ‘Father’. After a time, I gave up trying to keep track of all his various wacky posts: Sisman provides a neat summary at the back for readers who feel similarly exhausted.

Even though the Bishop of Bloemfontein called him ‘the wickedest man I have ever met’, I found it hard not to warm to the old rogue as he cons his way around the world. He had chutzpah, particularly where women were concerned. Being found out never seemed to deter him: he simply played the same trick again, this time on somebody else. ‘There is something rather engaging about the way he pursues his career of fraud and deceit without the slightest regard for occasional setbacks,’ observed Professor Boxer of Yale University.

His story also has a period charm about it: nowadays, frauds like Peters would be uncovered by a few minutes of Googling. Sisman disagrees, saying that fraudsters ‘seem to be as active today as they have ever been’. This may be so, but they are a different type of fraudster, often concentrating their operations on the internet itself. These days, frauds must find it much trickier to falsify jobs and qualifications, to change their identities or to bury criminal convictions.

In 1983, Peters popped up on TV’s Mastermind, once again wearing a dog collar. He was introduced as the Director of Religious Studies at a college of Lancaster University, an institution with which he had no connection whatsoever. His chosen subject was The Life of William Temple, the former Archbishop of Canterbury. He didn’t do too badly on the General Knowledge, but he still came joint last.

What motivated him? He was in pursuit of status, not money, and in particular the peculiar status conferred by preaching from the pulpit. Sisman suggests he suffered from Narcissistic Personality Disorder, though it was always those around him who suffered, rather than Peters himself.

Like many frauds, he created such a hall of mirrors around himself that the real Robert Peters remains elusive, however entertaining the pursuit.