A schoolboy who has collected 150 vacuum cleaners and carries out repairs on broken hoover is raking in thousands of pounds by selling them on – with his teachers among some of his customers.

Matthew Lock first became interested in vacuums aged two when he got his first toy Henry, and by the age of five was hoovering the family home.

The 13-year-old now says he’s earning good money from fixing old machines and selling them while carrying out repairs on every cleaner on the market.

Matthew, from Maghull, Merseyside, said: ‘I remember in year four or five having a rough idea how to take them apart and looking into how to make them run, that’s when the collecting started.

Matthew Lock first became interested in vacuums aged two when he got his first toy Henry, and by the age of five he was hoovering the family home

‘I started finding machines, getting parts and being able to put them together to make a new vacuum.

‘I became more and more interested in getting rarer machines.

‘I get them off eBay or on Facebook selling sites. I find them in skips and people have even started leaving them outside my back door.

‘Some of the Henrys I have are 40 years old. I like to fix them but if they’re beyond repair I will make a good one out of two hoovers.

‘They are all in my workshop in my garden which is where I do all my vacuum repairs.’ 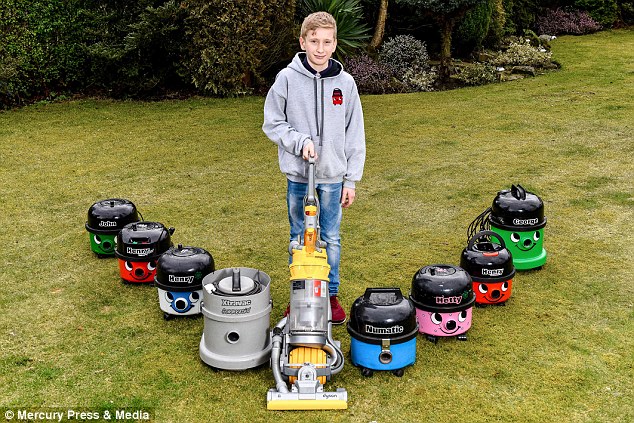 Matthew, who spends around 10 hours a week fixing broken vacuums, estimates he has fixed around 500 and sold 300 machines.

Once he’s fixed them up and sold them he reinvests the cash into another five machines.

Matthew said: ‘I just find it so satisfying getting them from places like builder’s yards where they’re full of plaster – being able to clean them up, make them look nice and get them up to a really good standard.

‘I’d love to be able to construct a vacuum that could do all jobs perfectly.’

For his 13th birthday the vacuum fan, who even does his own invoices, asked his dad to take him to the Numatic factory in Chard, Somerset.

Matthew said: ‘I picked up two rare machines during the trip. There’s an original Hetty which was used as a prototype and a marble effect Henry, nobody else has got them.

‘I have at least 100 that I wouldn’t want to sell because they are rare and are worth quite a lot of money.

‘Some are original Henrys and metal Numatics – some are the original vintage upright ones.

‘Some of the older metal Henrys could go for more than £500 on eBay.

‘I think my favourite hoovers are the Henry, which has the best cylinder, the Sebo Felix which is the best upright one and the Dyson V10 is the best cordless.

‘I like to try them out and test them against younger brands. 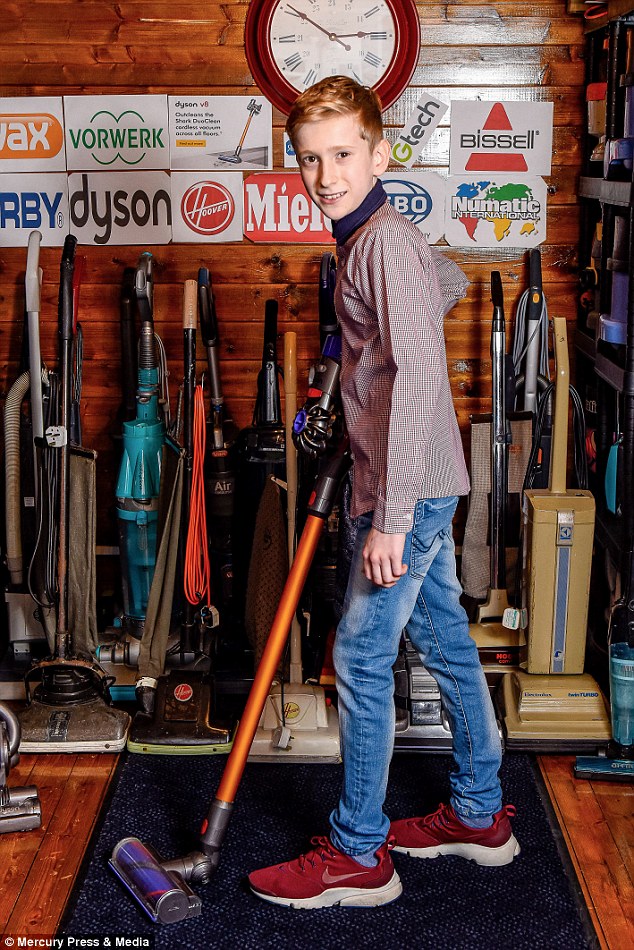 Matthew said the secret to a good vacuum is something that is built to last for at least 10 years, is lightweight, compact and with high suction

‘There are two that I really want – one is the 1950s hoover constellation and a Numatic Wendy – both are extremely rare.’

Matthew said the secret to a good vacuum is something that is built to last for at least 10 years, is lightweight, compact and with high suction.

During services he’s found keys and seven pound coins in one he bought from eBay which he joked paid for the postage.

For the past year Matthew has also been reviewing hoovers for American company Shark and sharing his thoughts on his social media channels.

Matthew said: ‘They got in touch with me about eight months ago.

‘I’m very honest about whether they are good machines. I wouldn’t want to spend hundreds of pounds on something that does not pick anything up.

‘I’m honest and people trust you more for it.’

Matthew said his inspirations are James Dyson and Chris Duncan – who invented the Henry hoover.

He said: ‘I want to emulate them and design and build my own vacuum.

‘I would love to visit the James Dyson Foundation and study engineering at the Dyson institute of Engineering and Technology.’

Matthew said: ‘My friends are very understanding, one of them really likes it and he helps me with videos for YouYube.

‘The response I’ve had is mostly positive – people are impressed that I’m so young and have a little business.’