On this night, there were no mind games. No crassness or fake gestures. These emotions, these tears, were all too heartfelt and fervent.

Inter Milan had just completed a historic treble after beating Bayern Munich in the 2010 Champions League final in Madrid. Jose Mourinho’s Italian project was complete and he knew, everyone knew, that a parting of ways was inevitable.

So seeing the Portuguese, at the highest of heights after claiming his second European Cup, welling his eyes out with centre back Marco Materazzi outside the Santiago Bernabeu – his soon-to-be home – was a surreal scene. Two of football’s supposed bad cops, embracing in a very real showing of raw passion. 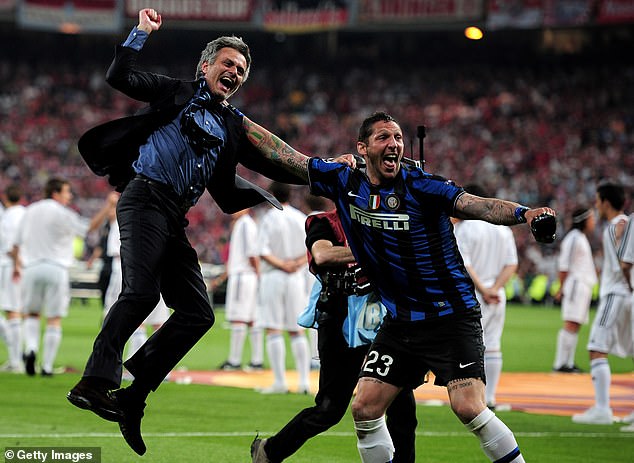 For all of Mourinho’s stunning triumphs, at Porto, Chelsea (twice) and Madrid, his two-year stint at Internazionale was his greatest feat. A feat never before accomplished in Italy’s rich footballing history and not accomplished since.

Not even Arrigo Sacchi or Carlo Ancelotti’s star-studded sides across town won every major trophy in one season. Diego Maradona down south at Napoli didn’t come close in the European Cup, while the domestic dominance of Juventus in the last decade is yet to translate to Europe’s ultimate prize.

But to understand how this legendary year emerged, how Barcelona’s best ever team was overcome and how Materazzi’s tears embodied everything 2009-10 Inter Milan stood for, we have to take this back to the beginning, and the departure of a certain Zlatan Ibrahimovic. 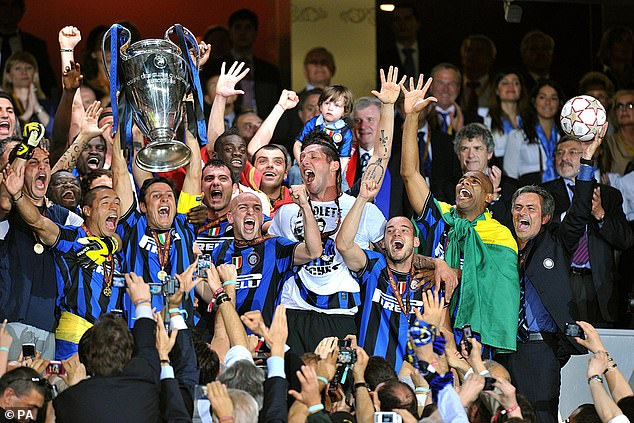 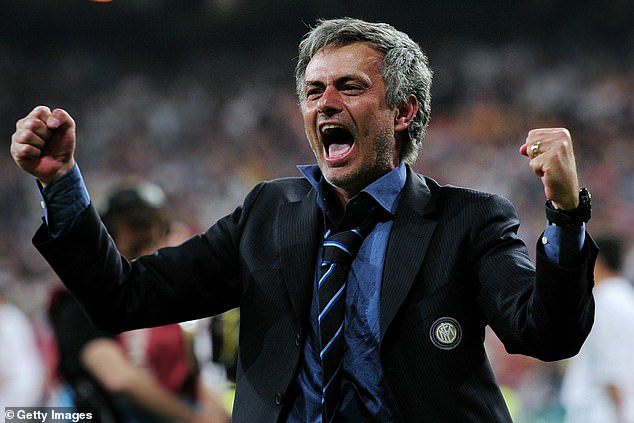 In Mourinho’s first season at Inter Milan, winning Serie A by a ten-point margin was not enough. Owner Massimo Moratti had specifically dispensed of predecessor in the dugout Roberto Mancini due to his ineptitude in Europe, despite three successive Scudettos.

When Inter deservedly crashed out to Manchester United in the last-16 of the Champions League, Mourinho was reeling. He, more than anyone, knew a change in mentality was needed.

So when Pep Guardiola, fresh from a debut-season treble of his own, wanted the Nerazzurri’s top-scorer and irrepressible star at the Camp Nou, on paper, Inter’s European hopes were taking a severe blow.

What’s more, Mourinho liked Ibrahimovic a lot. Parallels in egotism and charisma made the pair a perfect marriage, but in the summer of 2009, Jose saw the deal as an opportunity.

He let the Swede go, in exchange for the small matter of £59m and Samuel Eto’o, who’d scored against Manchester United in that year’s Champions League final. In hindsight, this was a Mourinho masterstroke.

Using the funds as he pleased, he also acquired Diego Milito and Thiago Motta from Genoa, veteran centre back Lucio from Bayern Munich, versatile forward Goran Pandev from Lazio and Wesley Sneijder from Real Madrid, yet to unleash his full potential.

Suddenly, the nucleus of Mourinho’s side had taken shape. Players full of skill and operating in their prime but, most significantly, prepared to run a thousand miles and more for their manager – something Zlatan innately wasn’t built to do. 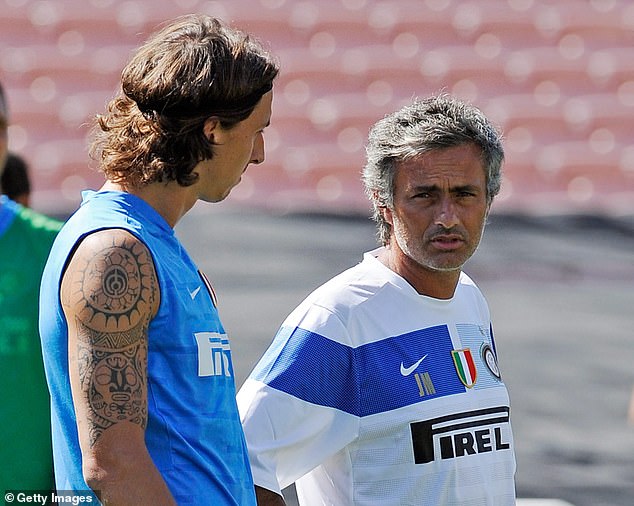 Though the pair got on, the loss of Zlatan Ibrahimovic was a blessing in disguise for Mourinho 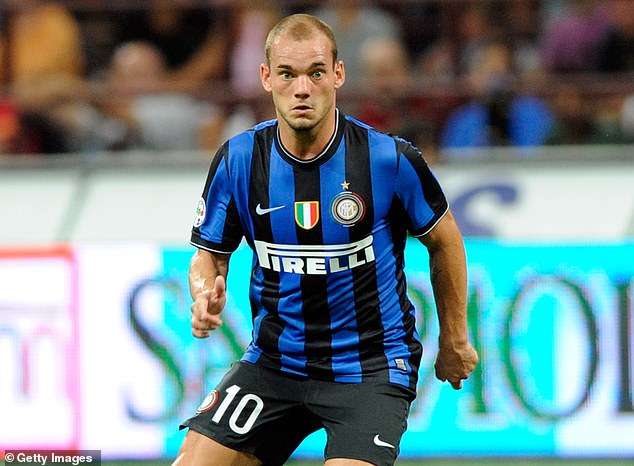 What people often forget though is that Inter actually met Barca earlier that season in the group-stages of the competition. Mourinho and Co stumbled to second-place, unable to record a victory against the Catalans.

But by the turn of the year, riding high again domestically, something changed. A stockade mentality, against anything and everything opposed to Mourinho’s way of operating, had developed not just within the squad, but within the entire club.

For example, Mourinho, in his irrevocably forthright manner, was upset with refereeing decisions going against his team in Italy’s top-flight.

All too aware of the power of his actions, an unforgettable handcuffs gesture to the cameras sent administrative pulses racing in February. A three-game ban. Do you think Mourinho cared? 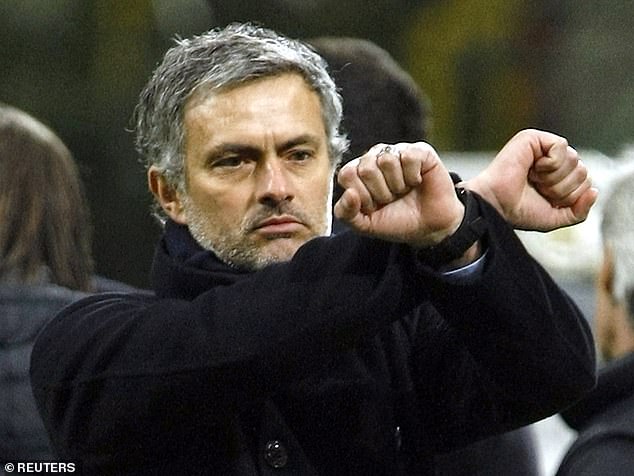 Up against former flame Chelsea in their first European knockout obstacle, this unison sieged was in full flow against Carlo Ancelotti’s side – one of Chelsea’s best, who’d go on to win the double.

After Inter won the first-leg tightly, 2-1, Mourinho returned to Stamford Bridge as the star of the show, from chatting up his ex-players in the tunnel to outfoxing Ancelotti over 90 gruelling minutes. A late Samuel Eto’o strike sealed a last-eight berth, and an even later Didier Drogba red card exemplified how Inter’s doggedness and resilience could toy with the world’s best.

This was the first sight of the Serie A side’s ‘shut-up-shop’ mentality and for all its critics, teams consistently couldn’t find an answer to Mourinho’s Italian Job. Play to win but above all else, don’t dare lose. 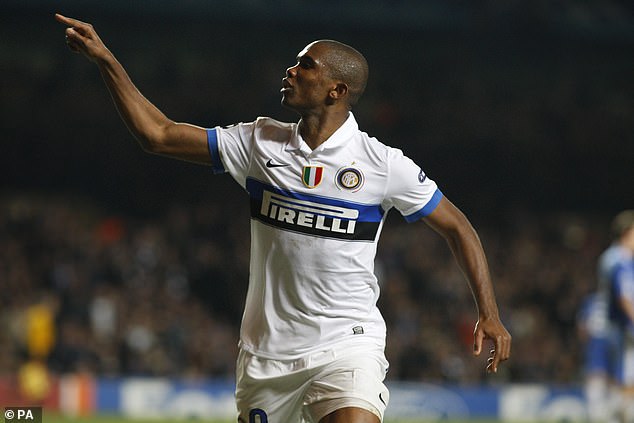 But after a straightforward victory against CSKA Moscow in the quarters, the last-four pitted Mourinho against another former flame. He was about to declare war on Tiki-taka in all its glory.

Books have been written about Jose Mourinho’s tumultuous relationship with FC Barcelona. Once a translator, then a coach, but never top-dog.

Before joining Inter, Mourinho was in-the-running to become the next head coach at the Camp Nou. Presentation pitched, ideas conveyed. Yet Barca, much to the Portuguese’s dismay, went in another direction, wary of conflicting personal and footballing ideologies. And Mourinho – king of grudges, if you will – never forgot it.

These two games, with the treble on the line, were the ultimate challenge for Jose Mourinho. How do you stop Lionel Messi and Pep Guardiola?

In match one, at the San Siro, a near-perfect performance of tactical discipline and conversion of chances meant Inter held a 3-1 lead going into the second-leg.

Battlelines drawn, pressure ramped up to the maximum, Mourinho threw down the gauntlet.

‘This is not an obsession, it’s just a dream. We have a dream to play in the Champions League final.

‘For them, this is not a dream anymore. It’s an obsession and the obsession is called Madrid, and Santiago Bernabeu.’ 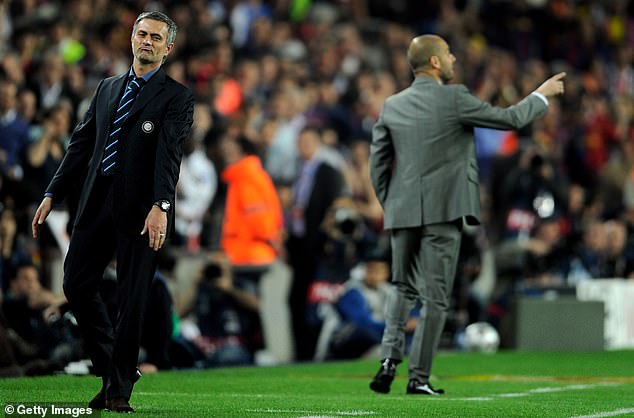 Journalists were drooling. Never have such few words formed so many news-lines. This was peak Mourinho – all his barmy, captivating eccentricities rolled into one 60-second period. Call it what you will – confidence or cockiness, perhaps both –  but Mourinho only played mind games of this ilk when his belief was at unshakeable levels. This was one such moment in his career.

You knew ahead of the game that he’d have a plan of cunning proportions. A method, one way or another, to halt the Barca juggernaut in its tracks. And deep down, you knew this second-leg wouldn’t be one for the purists.

The phrase ‘Parking the Bus’ has often been carelessly chucked around in recent years, to represent a team operating in a deep, defensive manner. But this was where that phrase was first coined. Or to go further, as Mourinho would say afterwards, ‘we parked the plane.’

Barcelona prodded and toiled, but it wasn’t enough. Not even after Inter had Motta sent-off in the first-half, courtesy of some exceptional Sergio Busquets play-acting. Not even after Gerard Pique scored with six minutes to go.

Never has a late 1-0 loss felt so rewarding. Inter were heading for Madrid and not even a hot-headed teenager by the name of Mario Balotelli, at the beginning of his controversy-ridden career, could steal the limelight.

Not usually one for humility in victory, Mourinho basked in his triumph, sprinting on to the pitch and motioning straight up to the directors’ box. Not even a livid Victor Valdes, racing over to confront him, could stop ‘The Translator’ now.

Afterwards, a purring Mourinho said: ‘I’ve won big matches, I’ve had great moments in my career. This one is the best one.’ 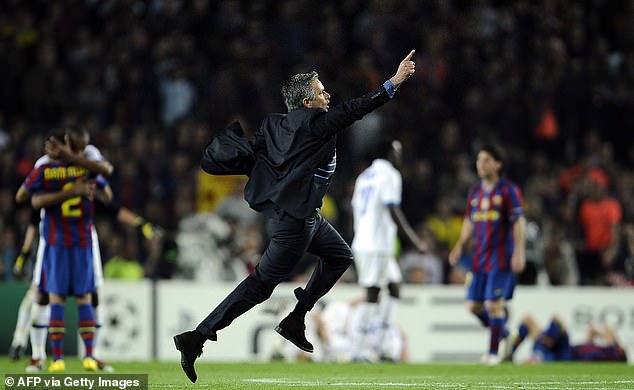 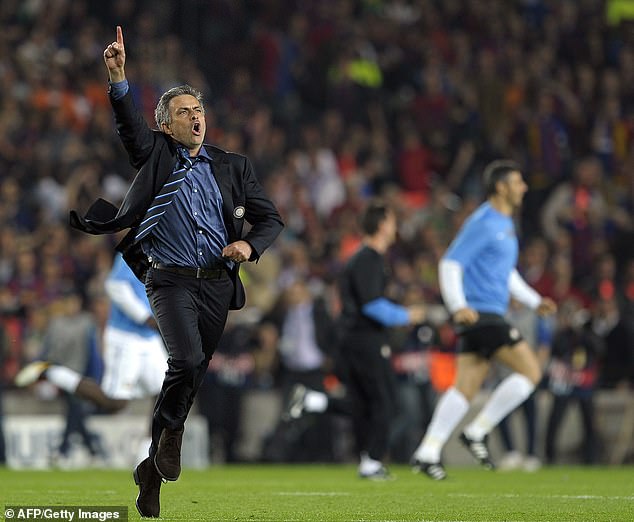 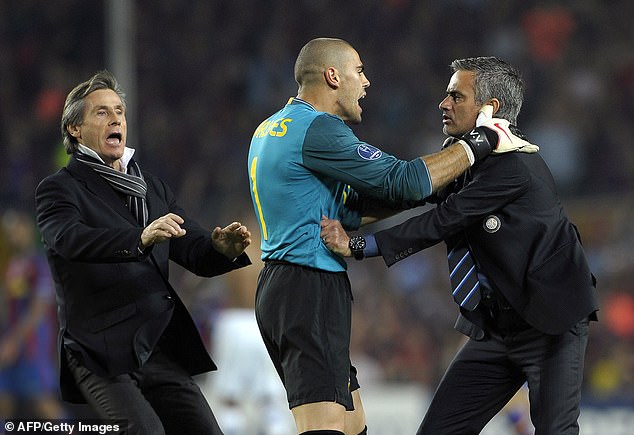 After leading for so long, Inter eventually stumbled over the line on the final day to clinch Serie A by two points from Roma. 11 days earlier, they won the Coppa Italia, courtesy of a Diego Milito strike against the same opponents in the Italian capital.

From then on, with the treble tantalisingly close, all roads led to Madrid and though opponents Bayern, coached by Mourinho’s tutor of years gone by Louis Van Gaal, were hitting a peak in their cycle, Mourinho would have his fitting swansong. 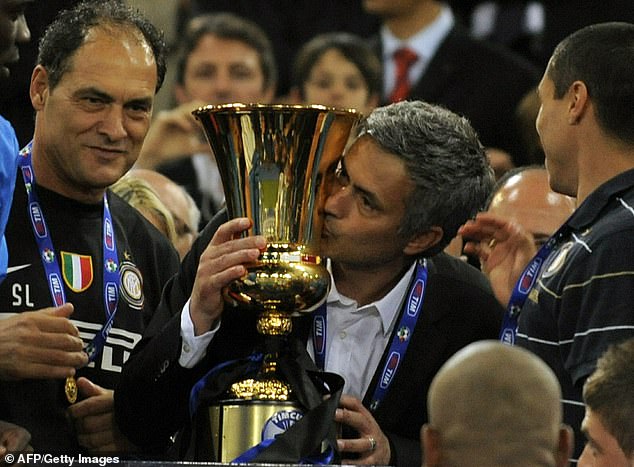 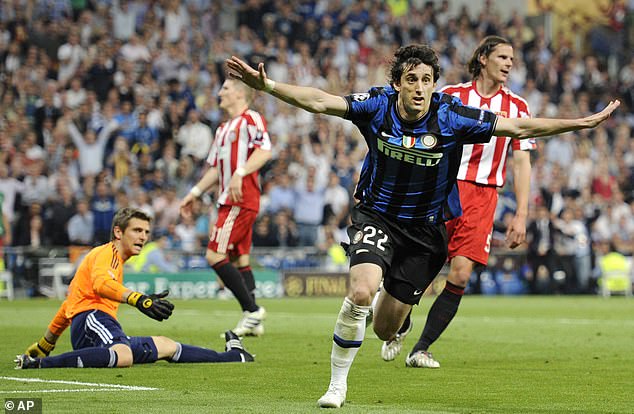 On the night, it was a final which never really came to life – just how Mourinho foresaw it. A double from top-scorer Milito, a clean-sheet and a season for the ages, which defied all odds, was complete.

Poetically, Mourinho saw his conquest at an end and the scene of his final triumph would be his next destination. Triggered by his adversarial nature, he fancied a bit more of Pep and Barcelona. Real Madrid appointed him manager six days later.

But it’s worth remembering that season in which a football club were the wholehearted embodiment of their manager. Courage, defiance and disobedience, the Internazionale institution swarmed to Mourinho’s win-at-all-costs mentality like bees to honey.

To see the way the man has changed in recent years, amid turmoil in London, Manchester, and back to London, is disheartening for lovers of the game. Perhaps inevitable in the topsy-turvy career that is football management, but disheartening nonetheless. 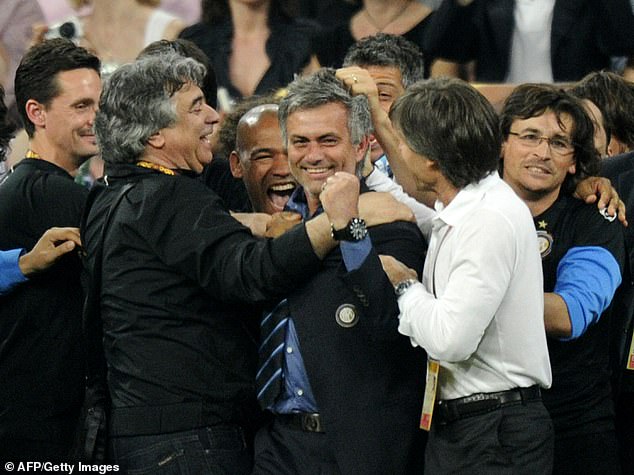 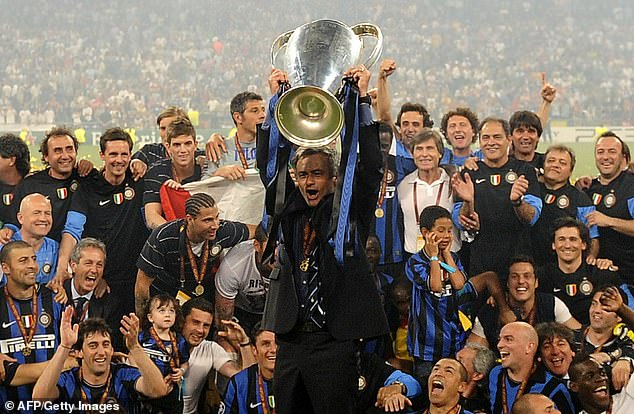 Which is why his time at Inter ten years ago should be remembered so fondly. Still eager to prove to himself, and to the world, that he was the 21st century coaching gift from the stars, the grey-haired footballing genius hit a glorious peak. His players peaked too, and struggled to adapt when Rafael Benitez arrived that summer.

But most heartwarmingly, Mourinho had a desirable, yet undeniable rapport with his players, never so clearly displayed in that moment of intimacy with Materazzi, a 92nd-minute substitute on the night.

An immeasurable bond that Mourinho has rarely seen since, in his subsequent decade in management. Not often does professional sport have such a perfect crescendo, concluding with the pinnacle. Inter 2010 is the modern-day anomaly.