‘The second wave of coronavirus is already in Germany’, senior Merkel ally says

‘The second wave of coronavirus is already in Germany’, senior Merkel ally says, as he admits ‘we have new clusters of infections every day’

A senior ally of Angela Merkel has said that a second wave of coronavirus has already hit Germany and that they are seeing new clusters of infections every day.

Politician Michael Kretschmer, premier of the eastern German state of Saxony, gave the warning this weekend as daily infections rose to 800 on Friday and Saturday.

The country’s R rate, which measures the number of infections caused by an individual, also rose above 1 to 1.08 on Saturday, up from 0.93 on Thursday.

A member of a medical team wearing protective clothes walks inside a farming compound in Mamming, southern Germany. At least 174 seasonal workers have tested positive for the virus at the farm

‘It is already taking place every day. We have new clusters of infections every day which could become very high numbers.’

The number of cases fell to 300 on Sunday but weekend figures are often lower than those during the week due to delays in reporting.

Health authorities have said the new cases have been caused by large celebrations or gatherings as well as returning travellers.

In addition, some 500 workers were sent into quarantine on a large Bavarian farm at the weekend in order to contain a mass coronavirus outbreak. 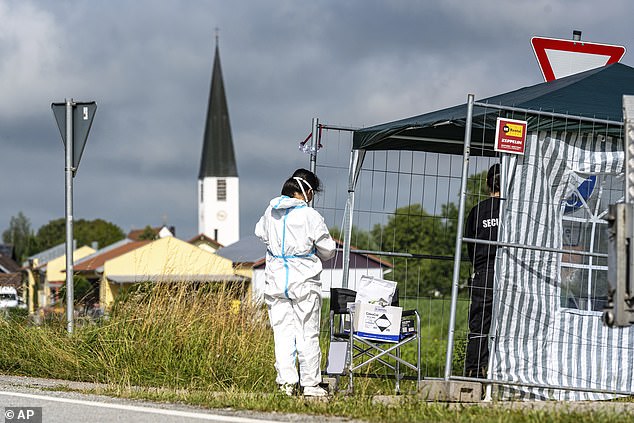 At least 174 seasonal workers have tested positive for the virus on the farm in the municipality of Mamming. Pictured: a woman in protective clothing stands outside the farm today

At least 174 seasonal workers have tested positive for the virus on the farm in the municipality of Mamming, most of them from Hungary, Romania, Bulgaria and Ukraine.

It comes as anyone coming back into Germany will be offered a free coronavirus test as they pass through the airport. The measure was introduced on Friday.

Berlin’s health minister Dilek Kalayci said that those coming back from high-risk countries should be tested and those returning from non-risk countries will also have the option. 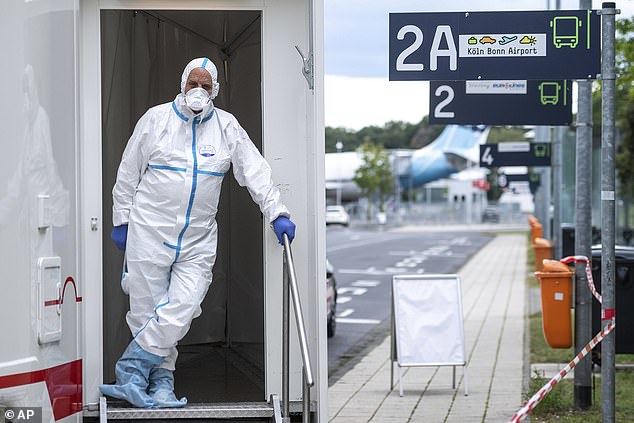 A person in protective clothes stand at the entrance to a test station for coronavirus at Cologne Bonn Airport in Cologne, Germany

She said the tests would initially be non-mandatory and the cost would be covered by the state in all cases in the new measure that was agreed by the health ministers of Germany’s 16 states.

A spokeswoman from the Robert Koch Institute (RKI), told the German Press Agency the institute was concerned with the increase in the country’s R-rate.

She said: ‘This development is very worrying and will continue to be monitored very closely by the RKI.’

‘A further exacerbation of the situation must be avoided.’

Despite the rise in cases, Germany has seen a relatively low mortality rate compared with its European neighbours, recording a total of 9,118 deaths so far. They have recorded a total of 205,609 infections.

However, the economy has still been battered, with 640,000 becoming unemployed due to the pandemic.

The country has also been hit by repeated coronavirus outbreaks at slaughterhouses, keeping authorities on high alert.