The secret behind Elton John and Bernie Taupin songwriting partnership

With a musical partnership spanning 50 years – producing more than 30 gold and platinum albums and a mountain of hits – songwriter Bernie Taupin concedes that his relationship with Elton John is more akin to a marriage. Though he adds, ‘We’ve probably had fewer arguments than most.’

It may seem incredible, but Taupin, who’s been married four times, says he and the notoriously tempestuous Elton have never had a major falling-out. At worst he’s given the superstar the cold shoulder. ‘But that was because of his sartorial choices,’ he says, grimacing. ‘They were hideous, some of them.’

Instead, they have quietly complemented each other for over half a century, since they were introduced in London in 1967. Taupin was 17 and Elton (then Reg Dwight) 20. Elton admitted he could write tunes but not lyrics, while Taupin could write only words. It was, they’ve both subsequently remarked, kismet that they met.

Elton John and Bernie Taupin, New York, 1970. Taupin, who’s been married four times, says he and the notoriously tempestuous Elton have never had a major falling-out

Taupin, however, says he was in awe of the young Elton. ‘I was the quintessential country bumpkin and he was sophisticated. He lived in London and played in clubs! So he looked out for me. He was like a big brother.’

Elton is a flamboyant extrovert and Royalist (their tribute version of Candle In The Wind to Elton’s friend, the late Princess Diana, is the biggest-selling pop single of all time), while Taupin, the man behind the voice, is a huge fan of America (he has lived there for over four decades) and is ‘not really a Royal person’.

Yet Taupin, estimated to be worth about £54 million, has managed to fit in. ‘I’ve had tea with the Queen Mother and I’ve been to Kensington Palace and split my pants [trousers] in front of Princess Margaret. She said to her lady-in-waiting, “Take Mr Taupin into my office and sew his trousers up.” I was just amazed at how much [Princess Margaret] chain-smoked. I remember her turning to one of the footmen and saying, “Where are my f****** Winstons?”’

We meet in Santa Barbara, California, close to his ranch, and while he may be responsible for some of pop’s most nuanced and emotional songs, at first glance he resembles an off-duty bouncer – stocky and muscular, with sunglasses clamped to his face. Now 68, the farmer’s son from Lincolnshire says, ‘I grew up wanting to be an American. Everything I listened to or read as a child was American. I think I was meant to live here.’

It’s his obsession with Americana that’s led to his and Elton’s latest project, Restoration, an album featuring the world’s biggest country stars, including Dolly Parton, Willie Nelson, Emmylou Harris and Johnny Cash’s daughter Rosanne, who have re-imagined some of the duo’s most beloved songs. Taupin, a country fanatic, enlisted his good friends, country legend Vince Gill and The Eagles’ Don Henley, to record one of his personal favourites, Sacrifice.’ Miley Cyrus gives her very individual take on their Seventies hit The Bitch Is Back, though Taupin noticed that as a vegan, she’d removed all the references to meat. 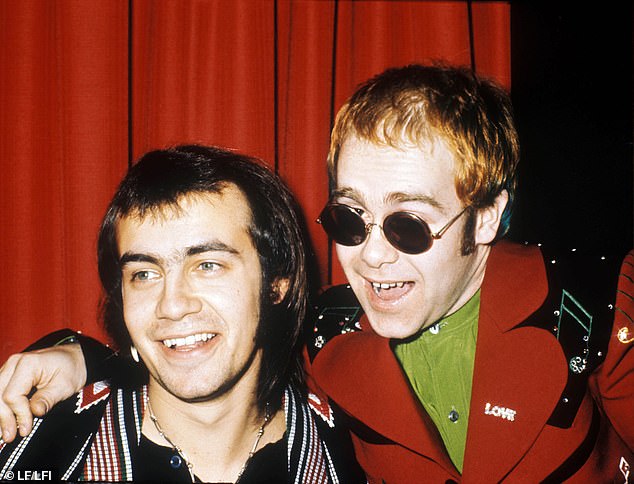 Elton and Taupin at a party in California, 1973. Elton is a flamboyant extrovert and Royalist, while Taupin is a huge fan of America and is ‘not really a Royal person’ 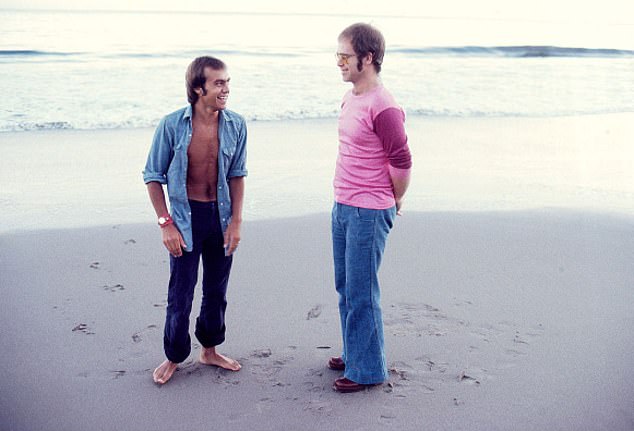 Elton and Taupin lived and worked together in the late Sixties, sharing the flat of Linda Woodrow – a pickled-onion heiress who got engaged to Elton, before he came out as gay 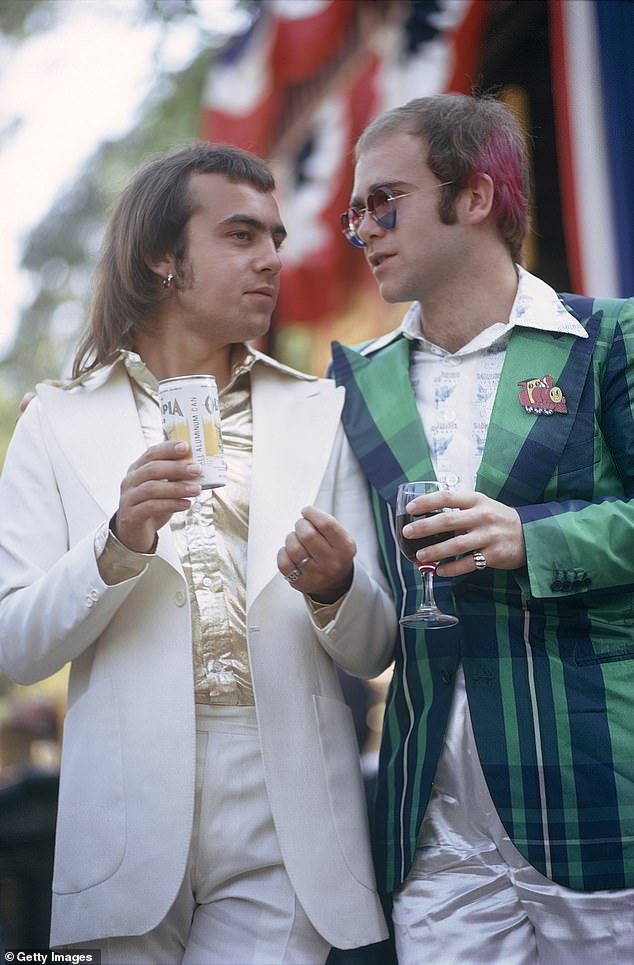 Elton has been vocal about his past addictions, but Taupin is loath to engage in what he once called ‘all that idolising of alcoholism and drug addiction’

Legend has it that the ‘bitch’ in question is in fact Elton himself, and that when he was in a bad mood, Taupin’s first wife, Maxine Feibelman, would utter, ‘The bitch is back.’ ‘It probably was about Elton,’ says Taupin, but seems reluctant to attribute the inspiration for it to his first wife, perhaps because his fourth wife, Heather Kidd, with whom he has two daughters, is sitting with us.

Elton and Taupin lived and worked together in the late Sixties, sharing the flat of Linda Woodrow – a pickled-onion heiress who got engaged to Elton, before he came out as gay. ‘It was a total mismatch, obviously,’ Taupin recalls. Indeed, so confused and depressed was the young singer that one afternoon Taupin returned home to find Elton on the kitchen floor with his head in the oven attempting suicide, though as Taupin later remarked, ‘He’d only turned the gas on low, he had left the window open and he’d even thought to take a cushion to rest his head on.’

It inspired the song Someone Saved My Life Tonight – a nod to Taupin and singer Long John Baldry, who both tried to convince their friend not to go through with the marriage. After breaking up with Woodrow, Elton moved back into his mother’s house in Pinner, taking Taupin with him and it was here that the duo forged their collaboration.

Even then, they never sat and worked together. Taupin would work on the lyrics and deliver them to Elton, who would then create the song. It’s a system they’ve stuck to, though Taupin adds, ‘There are a lot of discussions. I’ll visit him on the road and we’ll have frequent phone calls. It’s just that both of us prefer to work in a solitary manner.’ 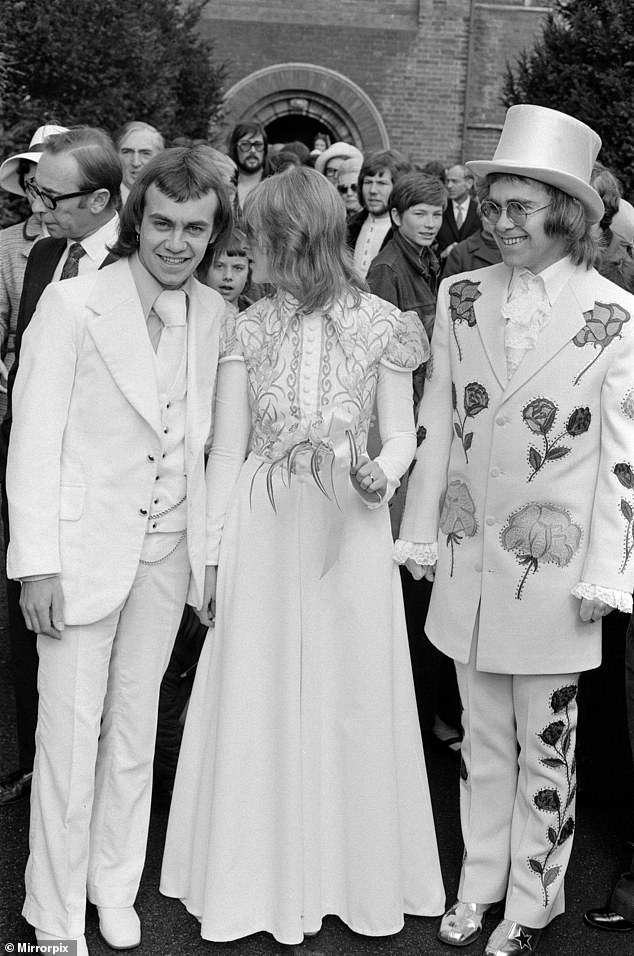 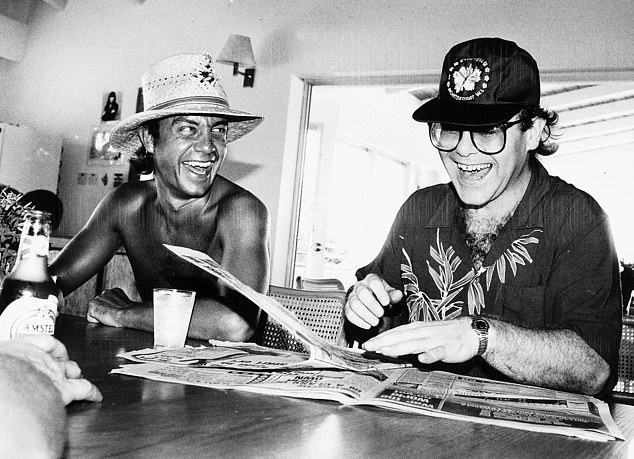 Taupin and John, in 1982. In 1983 they released the platinum-selling album Too Low For Zero, which spawned the hit I’m Still Standing – a nod to Elton’s resilience in the music industry

Their first hit, Your Song (which Taupin once said, ‘could only have been written by a 17-year-old who’d never been laid in his life’), came in 1970, and prefaced a decade of success with hits such as Crocodile Rock, Bennie And The Jets and Rocket Man. Their success, says Taupin, was gradual, and while he didn’t splurge on luxuries he did ‘get into a lot of trouble’. He had a fondness for vodka, women and cocaine. After his first marriage he checked into a clinic in Acapulco to clean up.

Elton has been vocal about his past addictions, but Taupin is loath to engage in what he once called ‘all that idolising of alcoholism and drug addiction’. But he’s irritated when people use ‘survival’ about musicians who have conquered their demons. ‘I can’t stand that word. To label someone a survivor is giving them way too much praise for bad behaviour. You get out of it if you want to, or you crash and burn.’

Was there a turning point for him? ‘Yeah, of course. You just wake up one day and go, “Well, I’m not doing this any more”, and that’s what I would do. Tried it. Done it. Next.’

It was helpful that he always wrote when he was straight. Even Rocket Man (‘Zero hour: 9am/And I’m gonna be high as a kite by then’)? ‘Absolutely,’ he says, ‘because I was driving at the time! What did Robin Williams say? Cocaine is God’s way of saying you’re making too much money. He got that right.’

Their respective excesses saw Taupin and Elton drift apart after the 1976 album Blue Moves, but a few years later they were back working together. In 1983 they released the platinum-selling album Too Low For Zero, which spawned the hit I’m Still Standing – a nod to Elton’s resilience in the music industry. But their biggest hit was to come in 1997 with their tribute to Princess Diana, Candle in the Wind, a reworking of their original 1974 song. ‘I know there’s something [in it] about “England’s rose”,’ says Taupin, ‘and I think I came up with that idea. But I didn’t know her or meet her. I did it for Elton, as a friend.’ 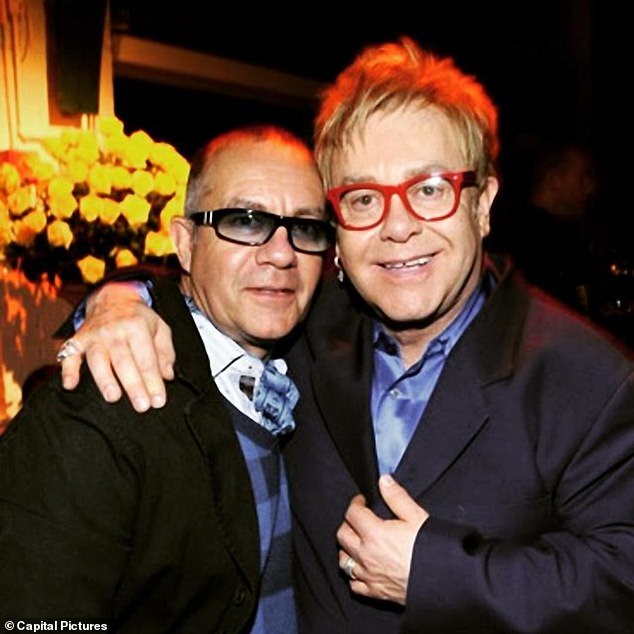 Bernie Taupin and Elton John in 2016. Taupin says of their early years: ‘I was the quintessential country bumpkin and he was sophisticated. He lived in London and played in clubs! So he looked out for me. He was like a big brother’

Taupin says he and Elton have talked about another new album in the next year or so. Next year, too, will see the release of the film Rocketman, a biopic-cum-fantasy musical starring Taron Egerton as Elton and Jamie Bell playing the diminutive Taupin.

He may be one of pop’s most successful songwriters but Taupin says, ‘Songwriters are people who sit in rooms all day and sweat blood trying to write songs. I don’t do that. I just write when the time comes along.’

‘Restoration’ is out now on Decca Records. countryline.tv