Even lockdown can’t ruffle Nicola Sturgeon’s perfect crop: How Scotland’s First Minister has been cutting her own DIY-coloured locks with guidance from a Zoom hairdresser and ‘proper scissors’

Scotland’s First Minister Nicola Sturgeon has been maintaining her perfectly quaffed locks by chopping and dying her hair  at home under the guidance of a Zoom hairdresser.

Edinburgh-based hairdresser Julie McGuire, 50, who’s been tending to the politician’s style for the past six years, revealed the secret behind Ms Sturgeon’s, 49, tidy haircut to The Telegraph.

Julie said she has been leaving hairdresser supplies, such as colour formula and ‘proper’ hairdressing tapering scissors, outside her own front door for Ms Sturgeon to collect.

Julie revealed: ‘Like many of my clients, Nicola has been cutting and colouring her own hair during lockdown, with my guidance over Zoom.’

Julie McGuire, 49, from Edinburgh, has revealed how she has been helping Scotland’s First Minister Nicola Sturgeon to keep her hair neat and tidy during lockdown by offering guidance over Zoom

Julie has been working as the politician’s hairdresser since she became First Minister six years ago.

She revealed how she gave Ms Sturgeon’s hair a final cut and style shortly before the lockdown but confessed that since then the politician has been tending to her locks herself.

Julie revealed that she gave the Scottish politician an extra pair of tapering scissors, which had a serrated edge, allowing the First Minister to ‘take some weight’ out of her locks.

The hairdresser then guided Ms Sturgeon to ‘lift away her fringe’ from her face, cutting a tiny bit at a time in order to ‘avoid a hard heavy line.’ 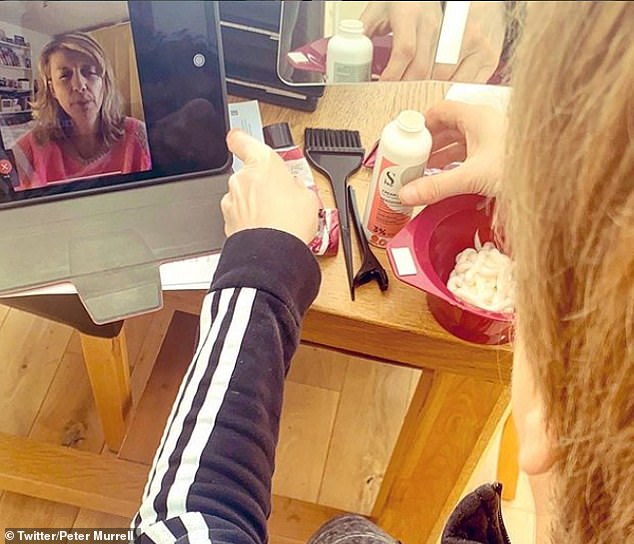 Julie revealed how she left dye formula and tapering scissors outside her front door for the politician to collect, before offering her guidance on hairdressing over video call

And it’s not just a small trim that Ms Sturgeon has been keeping up with at home, with Julie revealing how the First Minister has also been dying her hair during lockdown.

While some of Julie’s clients have been keen to simply maintain their hair by disguising greys and topping up their roots at home, she said that has not been the case for the First Minister.

Julie explained that the politician wanted to ‘go for the whole lot’, with the dye formula ‘a bit darker’ than the colour she normally goes for at the salon.

The First Minister went on to mix up the colour formula at home and applied the colour to sections all over her head, under the helpful eye of hairdresser Julie over a video call. 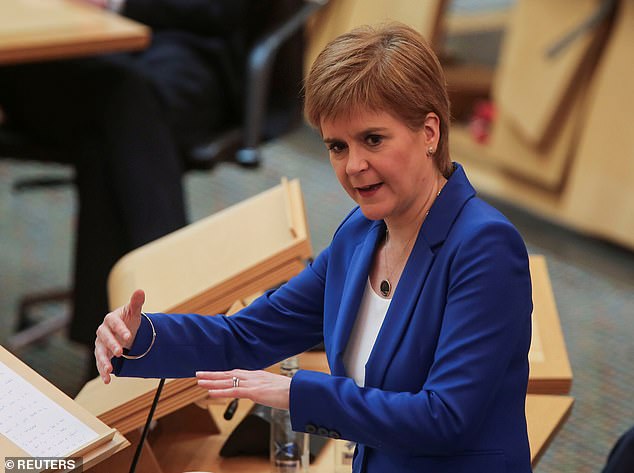 She also revealed how she would normally add lighter highlights through Ms Sturgeon’s hair, but she advised amateur hairdressers from trying anything ‘too technical’ at home.

And while Julie explained that while she never thought she would be in this position, she had joked with the politician about cutting her own hair.

She revealed: ‘I joked that I should give her a pair of hairdressing scissors to keep with her if she ever needed a quick touch-up, but she said ‘oh no, do not give them to me’.’