No Sunday roast is complete without a liberal helping of roast potatoes – but achieving perfect spuds can prove quite the challenge.

Luckily, Michelin-starred chef Heston Blumenthal has now revealed his trick for achieving roasties that are crispy on the outside, fluffy on the inside, every time.

The experimental chef does subscribe to the tried and tested method of parboiling ahead of roasting, but he says the trick is to extend the boiling time.

While many cooks will agree that parboiling potatoes for 10 minutes is more than enough time, Heston tells The Guardian they should be left bubbling away for at least 20 minutes.

Living up to his reputation for the unconventional, the chef also recommends adding the potato peelings to the boiling water, a trick he says enhances the flavour.

Heston isn’t the only chef to have an unorthodox approach to his potatoes with The Guardian reporting that MasterChef winner Steven Edwards forgoes parboiling entirely.

Steven instead puts his spuds in the microwave for 4-5 minutes so that roasting time is bought down to ten minutes rather than 30.

This isn’t the first time that cooks have come forward with cooking hacks for their potatoes with a food blogger baffling foodies with her approach to cooking baked spuds in April. 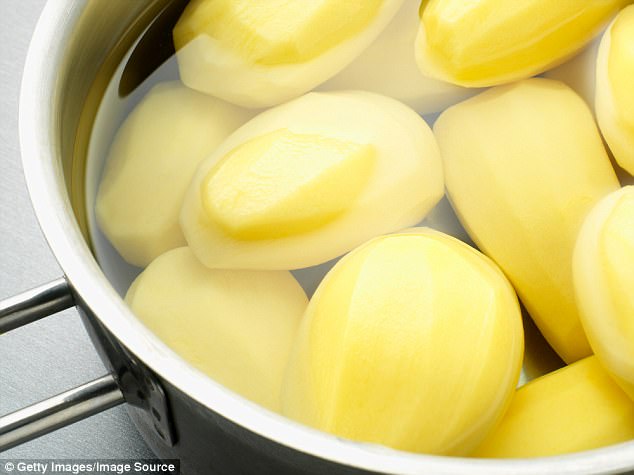 Instead of just wrapping your potato in foil and bunging it in the oven for an hour, blogger Tonia Larson of The Gunny Sack, from Minnesota, reveals there’s some lengthy – but crucial – preparation work to do before you put the spud in the oven.

She calls her recipe ‘The Bloomin’ Baked Potato’ after the way she cuts the potato to look like a blooming flower before she puts it the oven.

Cutting it in this way turns the skin crispy while leaving the potato inside creamy and soft, she says.

The expert cook told Popsugar that the age old method of boiling, draining the water and then mashing is incorrect, as you’re throwing all the flavour away with the cooking liquid.

Instead, he recommends cooking the potatoes in cream and butter and then collecting the resulting liquid to use to mash the potatoes with. 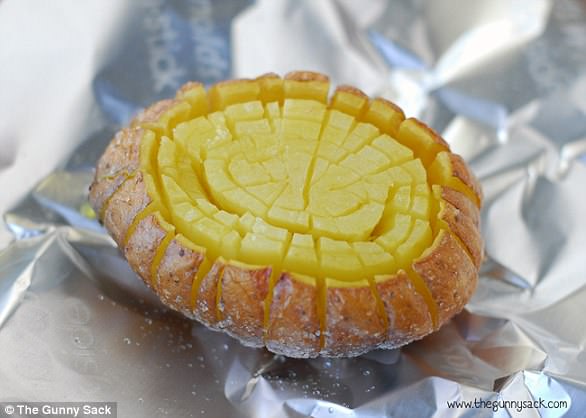 Tonia has photographed every stage of her Bloomin’ Baked Potato recipe. This is after the potato has been cut and brushed with olive oil and sea salt

2. Cut the bottom off the potato so one surface is flat and use a small knife to make rings around the inside of the potato.

3. Then flip the potato over so it’s resting on the flat surface and make vertical cuts around the side of the potato. Leave a space at the top that is uncut. The cuts should go all the way into the centre of the potato.

4. Brush the potato with olive oil and sea salt. Put the potato on a sheet of foil and bake for 30 minutes. 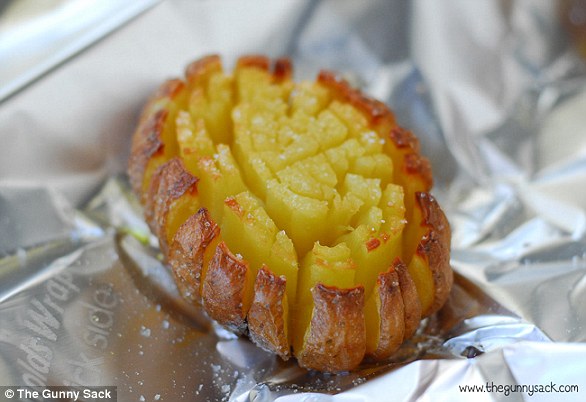 After one hour of baking, your potato should look like this

5. Take out of the oven and brush with more olive oil and sprinkle again with sea salt. Return it to the oven for another 30 minutes.

6. If you like, add grated cheese to the top and bake for another five minutes until the cheese is toasted and melted.

7. Remove from the oven, top with crispy bacon pieces and serve.