The Shark Whisperer: Diver calms giant predator with a touch of his hand

Pierrick Seybald is fearless in his quest to get up and close with one of nature’s greatest sea predators – said to be second only to the great white in its frequency of attacks on people.

In fact, the 34-year-old diver has made a living taking others for a swim in the deep blue sea off the waters of French Polynesia alongside the fearsome sea creature known as the tiger shark.

Named for the dark, vertical stripes, found mainly on the juvenile population, tiger sharks are large, blunt-nosed predators that have a well-earned reputation as man-eaters.

But, as the National Geographic said, because the creatures do not have a discerning palate, unlike the great white, the tiger shark is less likely to let go once it has bitten a human.

Not a risk many would be prepared to take when going for a swim in the sea. 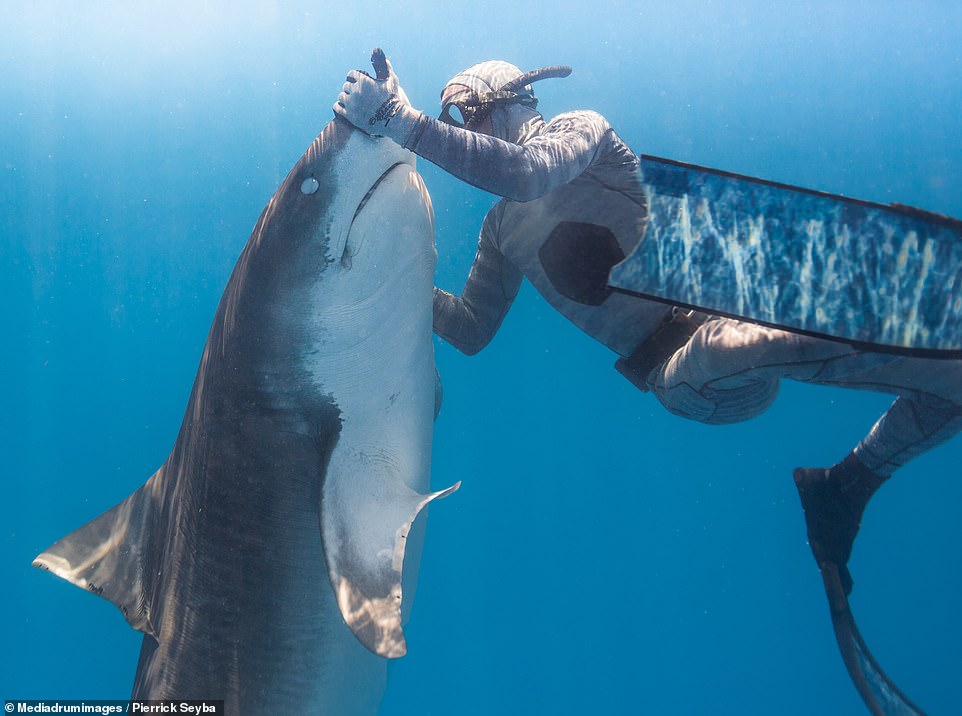 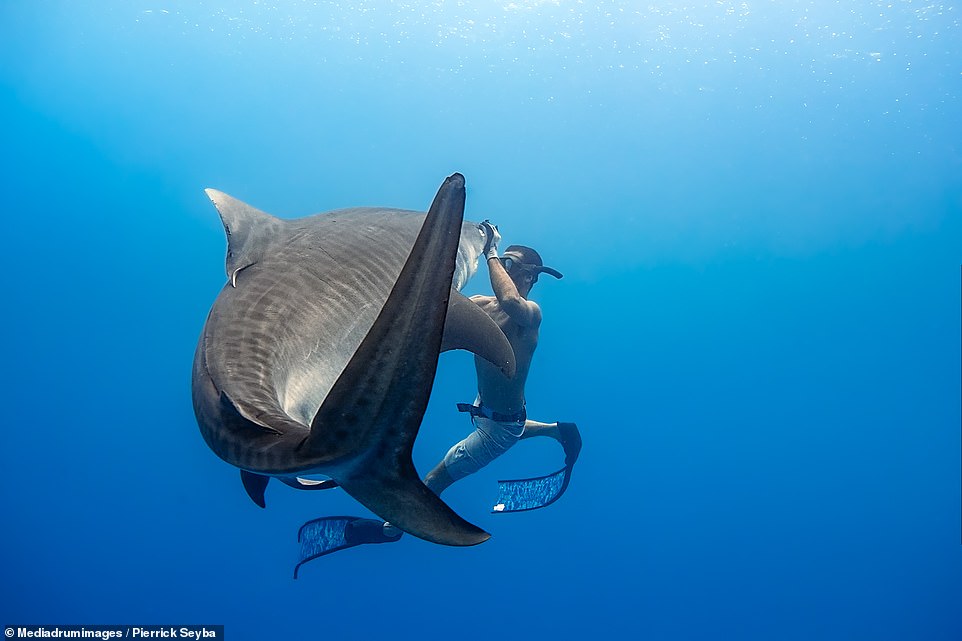 The diver says an up and close encounter with the sharks is not for beginner divers. But he said done with professionals there was nothing to fear

But for this diver, from Moorea, swimming with the sharks is just his typical day on the job.

Stunning images and video of the man, dubbed the ‘shark whisperer’ show how the French Polynesian diver directs the giant tiger sharks with the gentle touch of his hand, in the waters off the Tuamotu Islands.

The images, taken by photographer Cam Grant, portray the beauty of nature, while simultaneously sending a shiver of fear down the spine of anyone even slightly fearful of the huge fish.

And as he swims in close, a number of sharks issue a challenge, opening their large mouths subsequently exposing their huge array of teeth, in a clear sign of dominance.

But Mr Seybald said the encounters posed no threat – if you knew what you were doing.

‘I’m a shark safety diver and I do shark feeding in specific areas to attract sharks and provide a great experience for my guests,’ he said.

‘Sometimes you can have more than 10 tiger sharks in the water in competition for food and they often come to challenge you. No beginners or guests can go there, just very experienced shark divers.’ 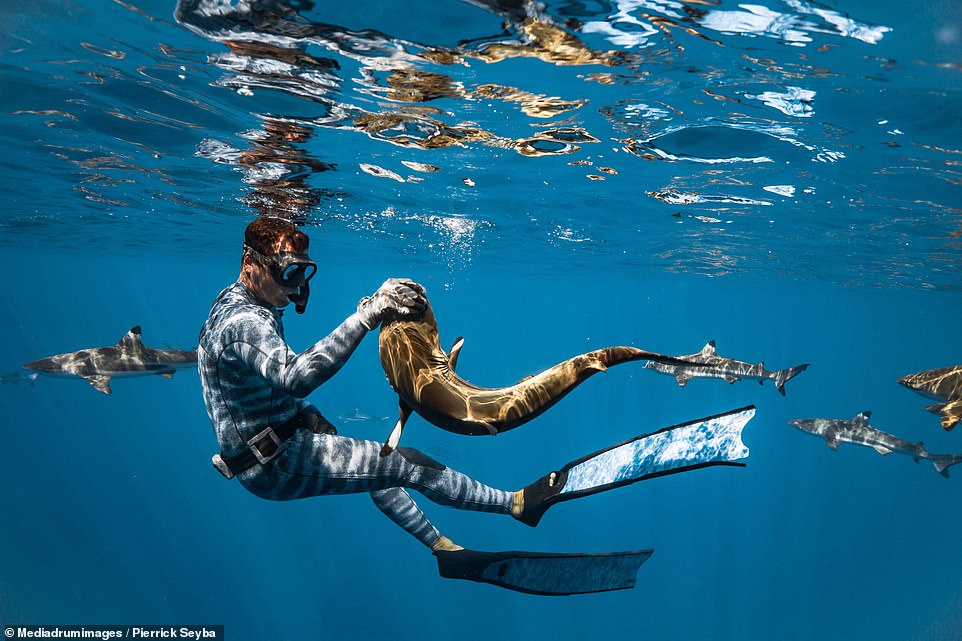 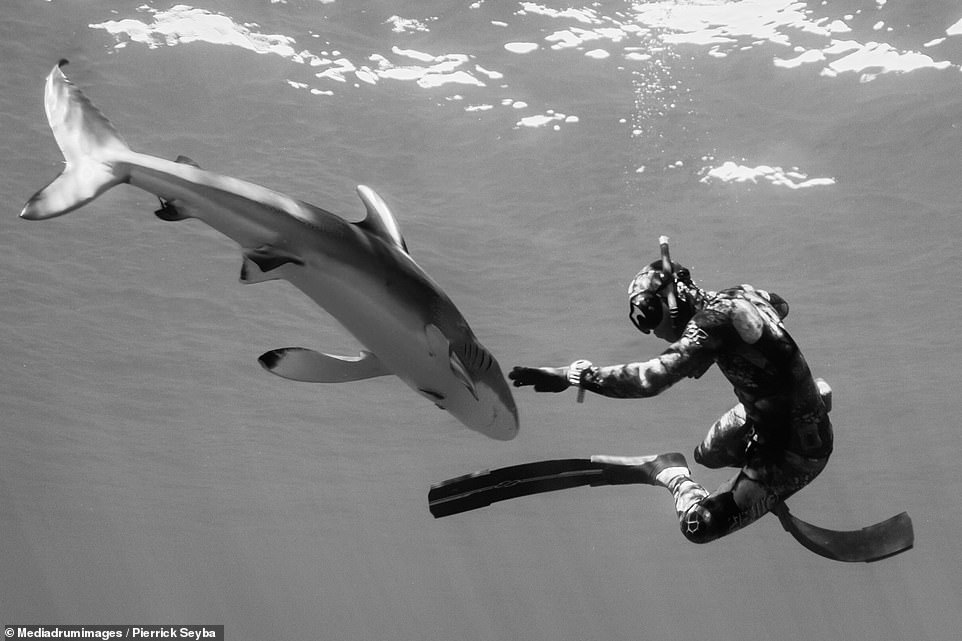 Learn all about the great sea predator the tiger shark

Tiger sharks are named for the dark, vertical stripes that are mainly found on juvenile sharks

The large, blunt-nosed predators have a reputation as man-eaters

Scavengers by nature, tiger sharks have an almost limitless menu of diet items

They have sharp, teeth and powerful jaws that allow them to crack the shells on sea turtles and clams

They are listed as near-threatened

The keen diver said when a shark opened its mouth, this was more of a symbolic gesture than an eminent warning the creature was about to attack.

Though he said, it was still a sign to be wary of.

‘When these big female tiger sharks come to challenge me with their mouth open I have to be ready to control or redirect them.

‘They don’t really want to attack me and just want to show me their dominance. If a shark really wanted to attack me, trust me I would not be here today. Sharks are very smart and they know we are not at all in their food chain.’

The experienced diver said he had a number of tricks on hand to calm the sharks after a show of dominance.

‘I often calm them by stimulating the ampullae of Lorenzini with my hand. We call that the tonic immobility and we use that method to remove hooks that sharks got from fisherman.’

The ampullae of Lorenzini are special sensing organs called electroreceptors that forming a network of jelly-filled pores on the fish.

These sensory organs help fish to sense electric fields in the water.

Tonic immobility is a natural state of paralysis that animals enter, often called animal hypnosis. Its function is not certain. It may be related to mating in certain animals like sharks. It may also be a way of avoiding or deterring predators.

Mr Seybald said the creatures were a part of the marine ecosystem and it was important to change the negative perception many people had around sharks.

‘We have to replace shark fishing with ecotourism activity that brings more money and preserves sharks,’ he said. 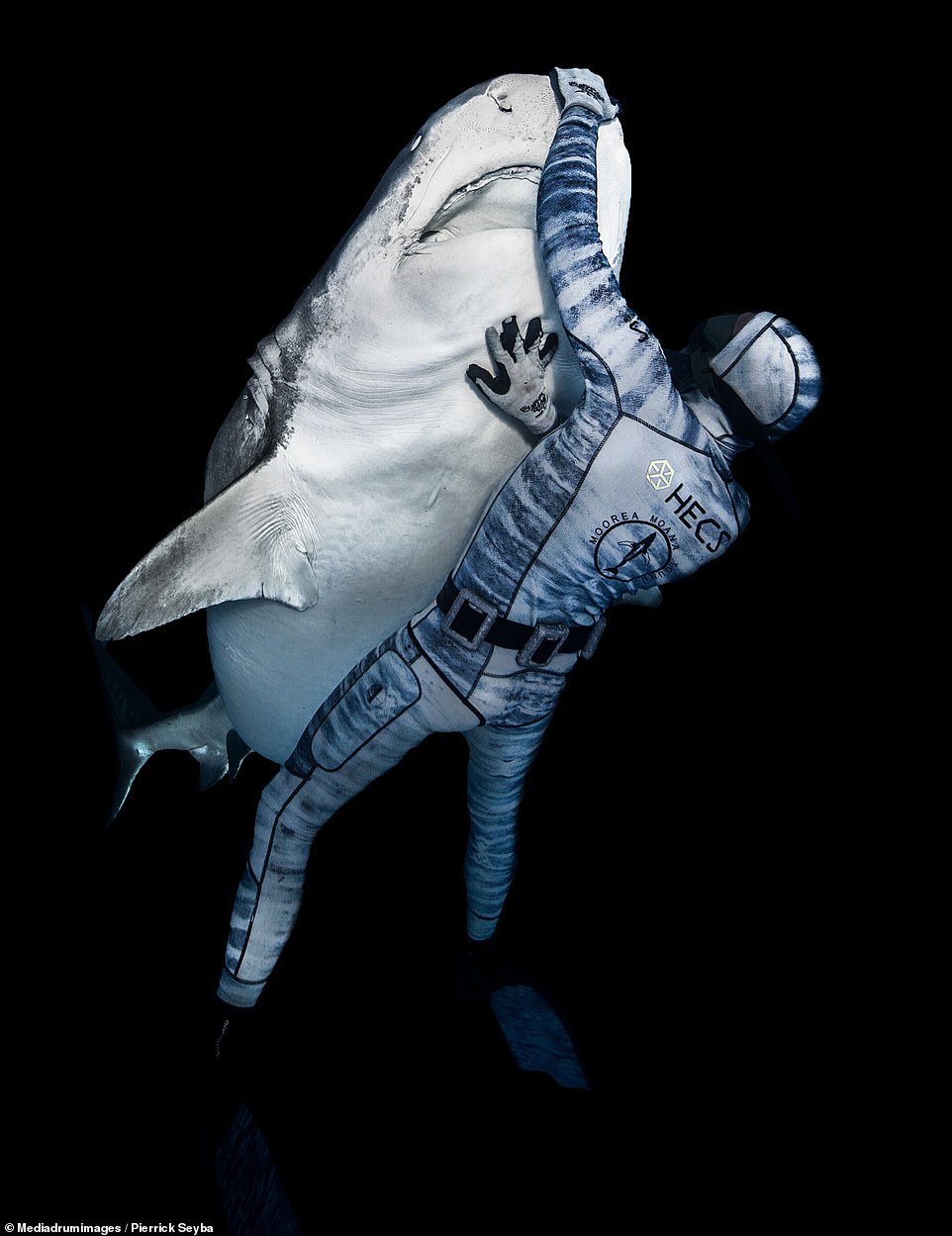 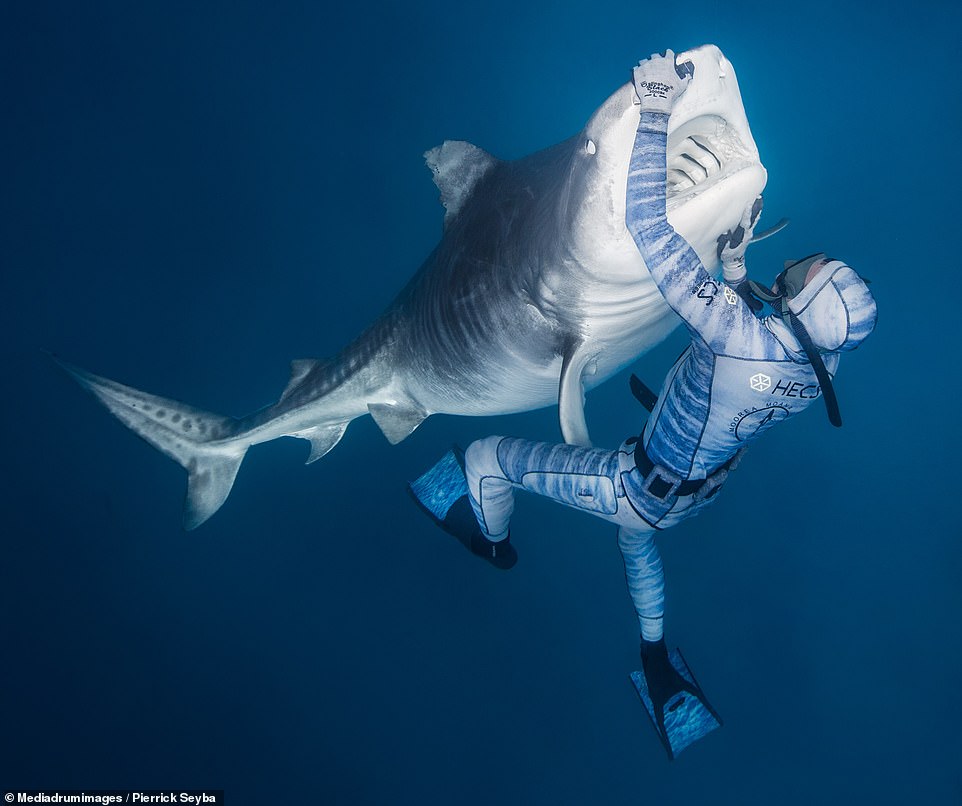 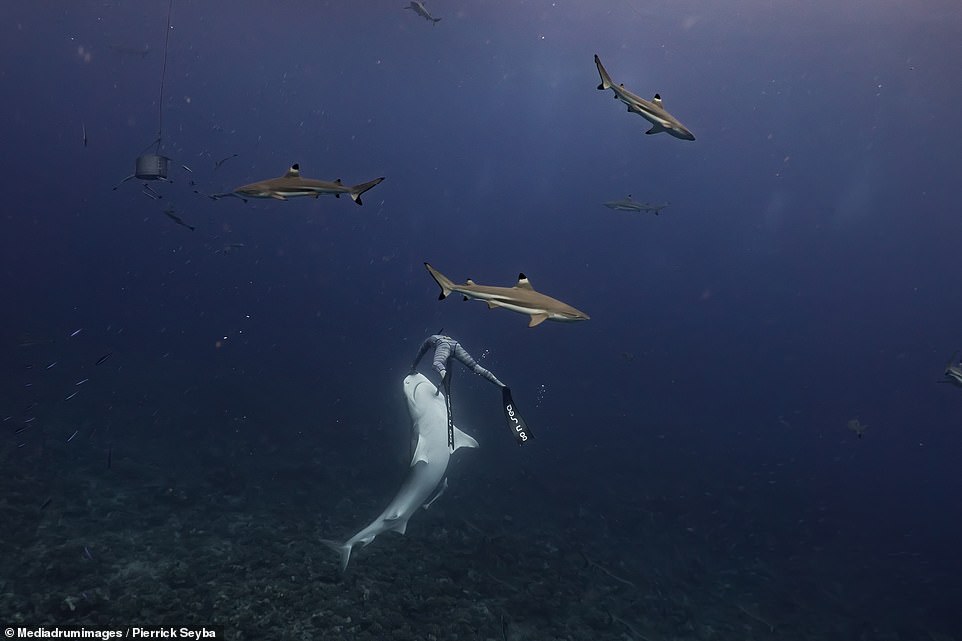 Mr Seybald said the area around the Tuamotu Islands was the ideal place to study the behaviour of the tiger shark population.

‘With my ecotourism business MooreaMoanaTours I show my guests how amazing it is to observe sharks and swim with them. After that their fear often disappears and their idea of sharks totally changes.

‘With our foundation Ma o Mana Foundation we help research, we educate kids and fisherman about the importance of shark for the marine ecosystem.

‘I want people to love sharks, protect sharks, swim with them but also show them that a shark stays a shark.

‘Some situations in shark feeding can be complicated and people have to go with professionals to avoid accidents. Accidents always reinforce the bad reputation that sharks have and increase the numbers being killed.’ 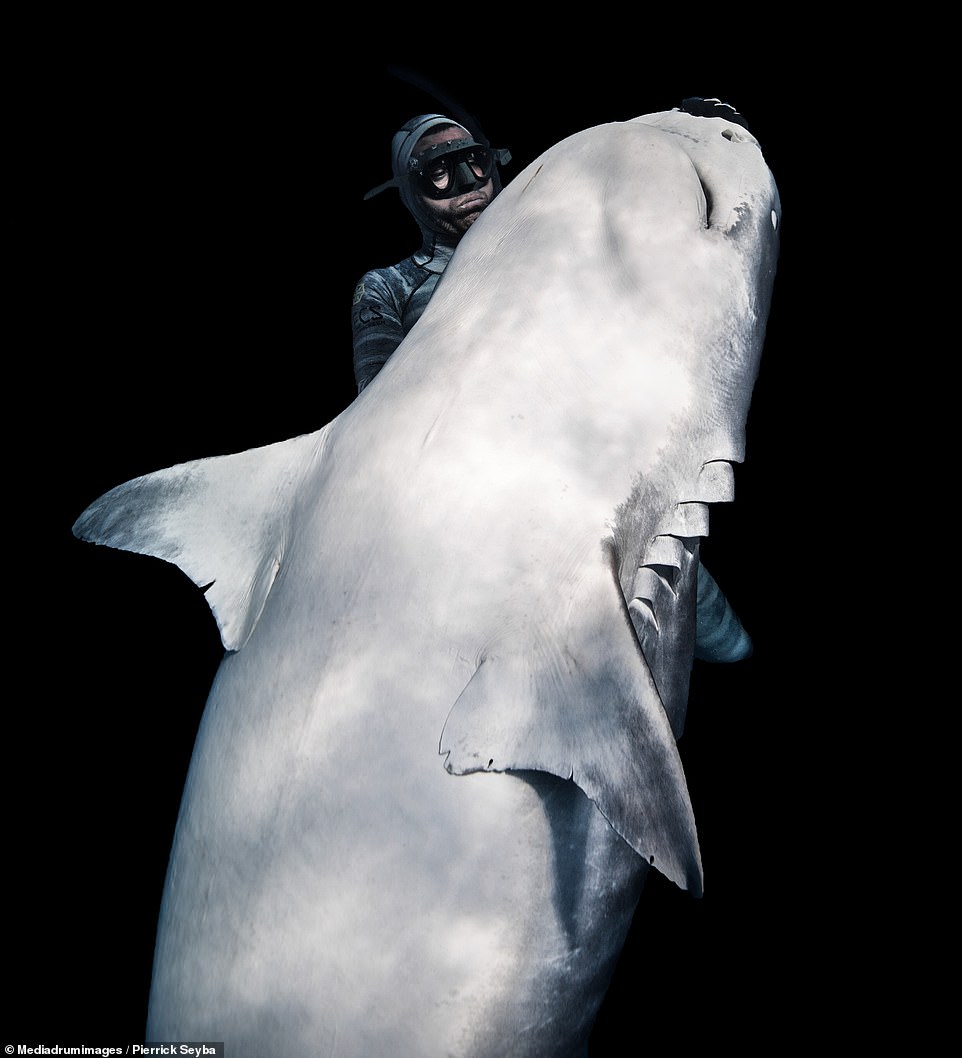 Pierrick Seybald, who owns MooreaMoana Tours, said humans were not part of the shark’s food chain, so as long as you knew what you were doing an encounter with the creatures was safe 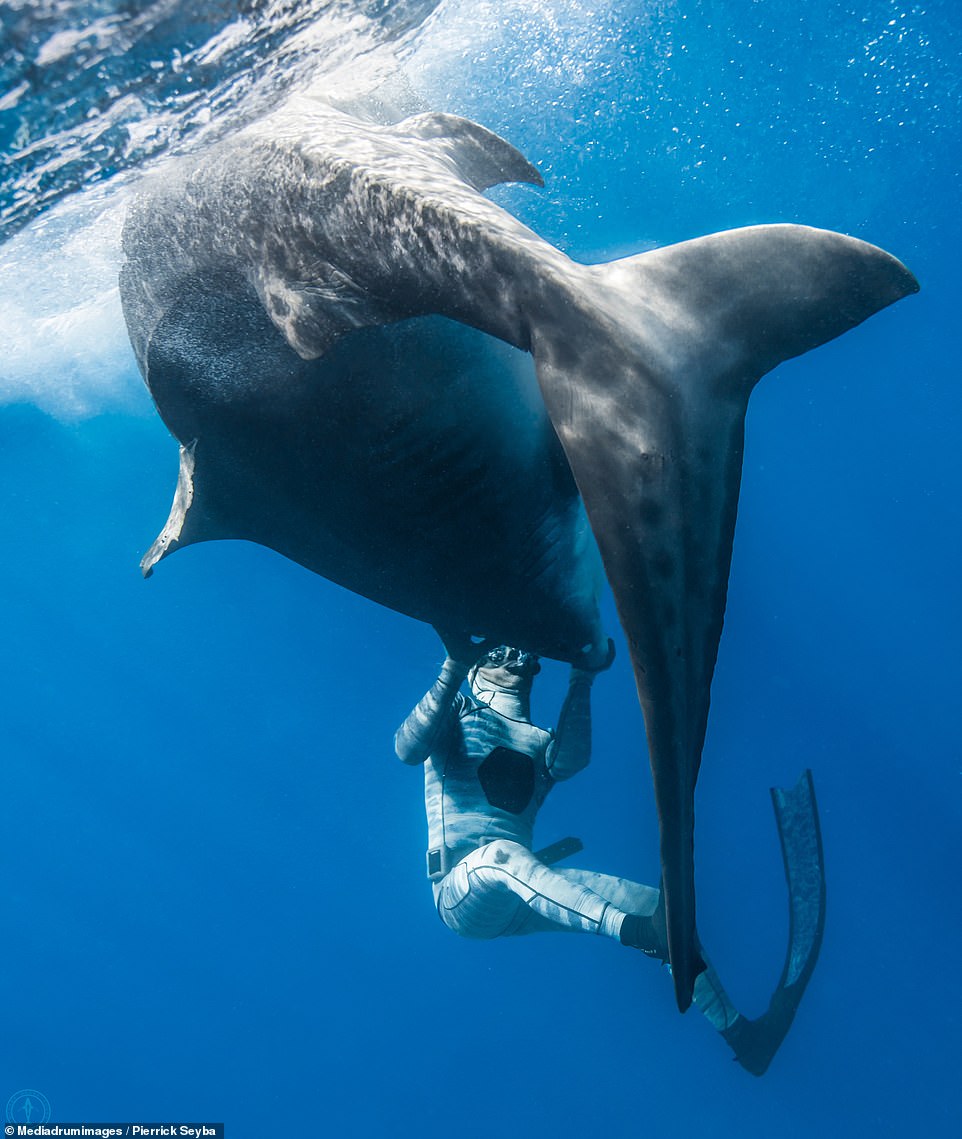