Shocking footage has captured the moment officers surrounded and arrested a man who led them on two separate police chases.

The footage, shot from a mobile phone, shows police surround the man’s white truck while it is stopped in heavy traffic in Sydney’s CBD.

The 20-year-old man was travelling in a stolen vehicle when he failed to stop at a roadside breath test in Tenterfield, northern NSW, at 10.45pm on Friday night, police said.

This led police to initiate a chase, however, it was stopped a short time later due to dangerous driving.

At 7pm on Saturday, officers again spotted the stolen Toyota Landcruiser on the Pacific Highway in North Sydney and police initiated another pursuit, which led across the Harbour Bridge and into the CBD.

Eventually the man, originally from Queensland where the vehicle was reported stolen, had to stop due to traffic, allowing police to surround the vehicle and apprehend the man.

Police allege the man, at one point, drove onto the footpath to try to avoid traffic. 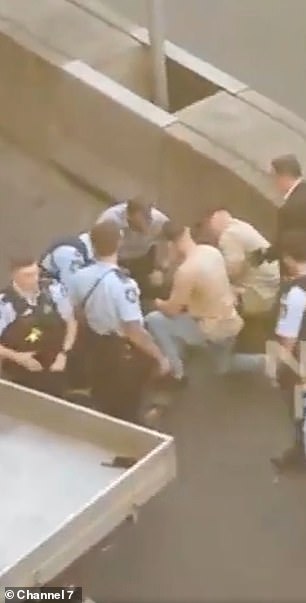 Police smashed a window to get to the driver and ammunition was also found during a search of the vehicle.

Noone was injured although several vehicles were damaged in the pursuit.

The driver has been charged with offences in connection with stealing a vehicle, the police pursuits, driving dangerously, and unlicensed driving.

He was refused bail to appear before Parramatta Bail Court on Sunday.