Experts have revealed the shocking tweaks that can add hundreds of calories to your meals, and why a healthy-looking dish isn’t always going to be good for your waistline.

The founder of the Australian weight loss program The Healthy Mummy Rhian Allen explained that very often the issue with weight loss is that we don’t realise that we’re making unhealthy choices.

‘Small changes can really change the nutritional details and calories in the meals you’re eating, and can give you more of an opportunity to enable you to reach your weight loss goals,’ Rhian said.

She illustrated this with several food examples, and revealed how changing just a few things can make your dishes healthier. 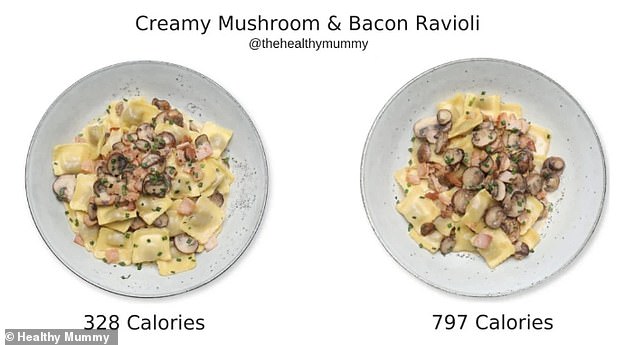 With the larger pasta dish, more ravioli was added, as well as regular fat thickened cream and more bacon (pictured)

When looking for a comfort dish, many turn their attention to pasta and something like creamy mushroom and bacon ravioli.

But with this dish, it’s easy to go overboard and your meal can quickly end up with close to 800 calories.

‘With this comparison, the larger calorie meal increased to 185 grams of beef ravioli and we used 100mL regular fat thickened cream as opposed to reduced fat,’ Rhian said.

They also increase the bacon by 54 grams (or by two rashers), and increased the meal to 10mL of extra Virgin olive oil.

If you want to keep the calories down in your pasta dishes, Rhian recommends you keep the cream to a minimum and bulk out the pasta with additional vegetables, be they mushrooms or broccoli. 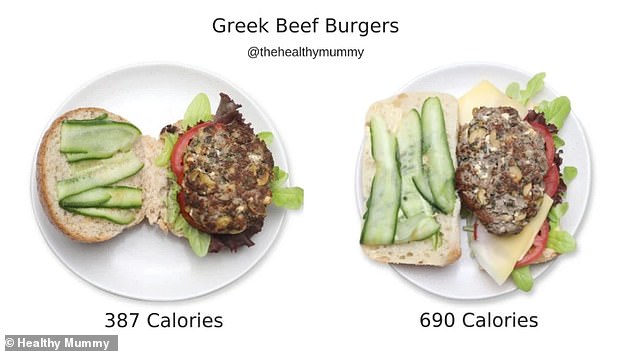 The second thing Rhian looked at was Greef beef burgers, a weekend treat for many families. In the larger dish, Rhian said she increased the beef mince, switched the bread, added butter and more feta to the patties (pictured)

The second thing Rhian looked at was Greek beef burgers, a weekend treat for many families.

‘In the 690 calorie version, we increased the beef mince to 120 grams, changed the wholegrain bread roll for one medium Turkish roll and added one teaspoon of butter to the roll,’ Rhian said.

She also said she increased the amount of feta cheese inside the burger patty to 25 grams and added one slice of regular fat cheddar cheese (20 grams) to the burger fillings.

All of this resulted in more than 300 calories of difference. 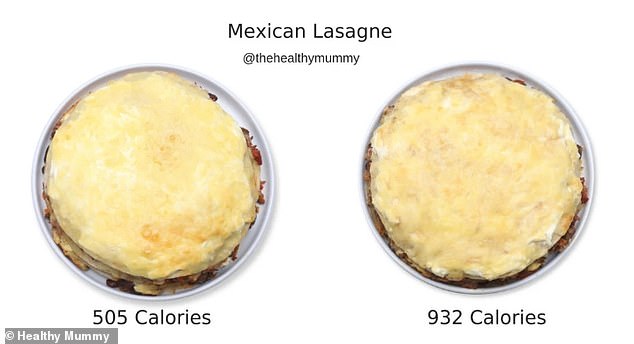 With this Mexican lasagne (pictured), Rhian said she increased the mince and kidney beans, used full fat sour cream and cheese and added white sauce to make up more than 400 extra calories

The difference between these two Mexican lasagnes for four people is a massive 427 calories.

While the two dishes look remarkably similar, the healthy eating expert explained that by making just a few small tweaks, you can make your dish healthier. 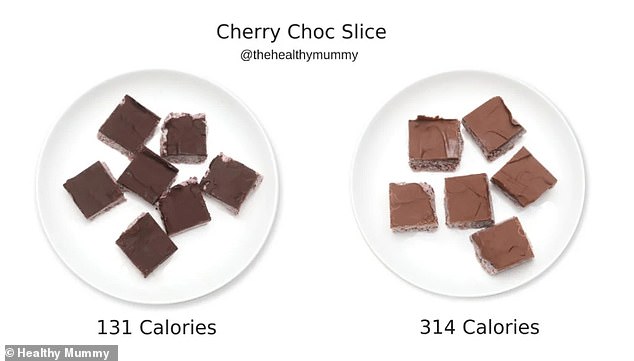 Rhian illustrated how desserts or snacks can quickly add up, with a cherry chocolate slice, which could either set you back 131 calories per slice or 314 calories (pictured)

It’s not just main meals where you can easily double up your calories, but desserts and snacks too.

Rhian illustrated this with a cherry chocolate slice, which could either set you back 131 calories per slice or 314 calories.

‘With the more fattening one, we changed the dark chocolate to 150 grams of milk chocolate, we increased the shredded coconut to 85 grams, omitted chia seeds and made the portion size slightly larger,’ Rhian said.

Keep an eye on your portion size and remember you should never be eating anything that is bigger than your fist. 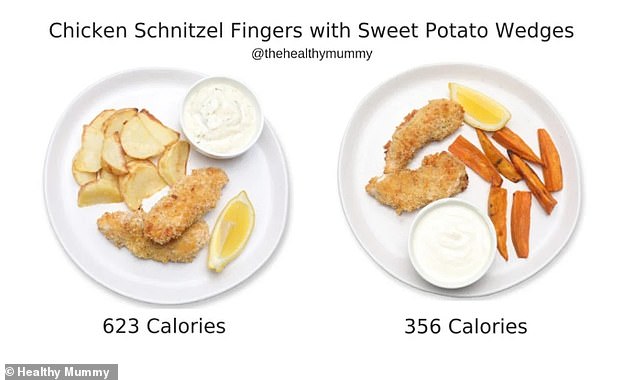 By switching the potato for sweet potato and using yoghurt instead of aioli, you could save yourself hundreds of calories with this chicken schnitzel dish (pictured)

Finally, Rhian said a simple dish like chicken schitzel fingers with wedges can quickly add up to 623 calories per serve, provided you’re not careful.

‘We also increased the oil to two tablespoons.’

If you’re trying to be healthy, limit things like aioli and make healthy substitutions.