The simple jab helping women get over a wee problem

Thousands of women suffering embarrassing bladder problems could be spared risky and invasive surgery thanks to a simple jab.

The injections treat a form of the condition called stress urinary incontinence (SUI), which is more common with age and among women who are overweight or who have had children.

Studies show that eight in ten women find the procedure effective, meaning it could be a viable alternative to the now banned mesh-implant operation previously offered to patients.

Four out of ten mothers experience difficulties ‘holding on’ after giving birth. Among those affected is actress Kate Winslet, 42, who owned up in 2015 to suffering accidents while sneezing.

Five million British women are said to suffer from some sort of urinary incontinence.

SUI is caused by a weakness in the pelvic-floor muscles and prevents the urethra, the tube that carries urine out of the body, from closing fully. When sudden pressure is put on the bladder, urine can leak out – and this can happen during normal daily activities such as walking, or when coughing or laughing.

Until recently, the most popular and effective treatment for moderate to severe SUI was to insert a mesh implant to support the bladder. But health watchdogs last year warned against offering the procedure after reports of post-operative complications with healing, which left women suffering severe pain. Now there could be a safer, non-invasive alternative. Called Bulkamid, it involves having up to four injections in the tissue surrounding the neck of the bladder.

The injections contain a smooth, watery gel that stays pliable. This plumps or bulks up the tissue in the neck of the bladder to stop urine leaking.

The injections are administered under local anaesthetic in a procedure lasting just 15 minutes. 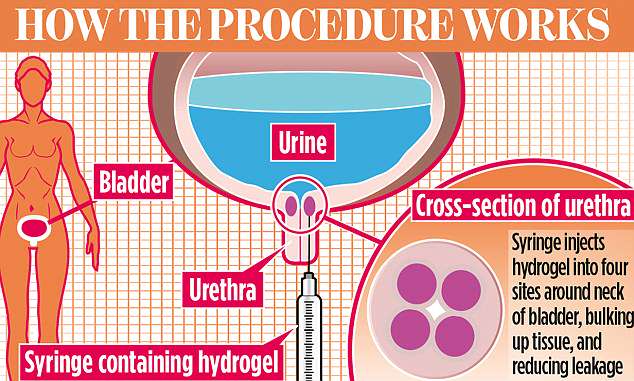 Bulkamid was originally developed in 2006, and experts say there is now enough evidence on its effectiveness that it can be considered a viable alternative to mesh surgery.

The treatment was originally reserved for older women who were considered not fit for surgery. Initial trial results showed the success rate – defined as patients needing only one round of treatment – was about 50 per cent.

But changing the positioning of the injections around the neck of the bladder and offering them also to younger women has pushed up the success rate to 80 per cent. There are no known side effects, apart from the pain of the injection, which has been likened to a dental anaesthetic jab.

Success rates with the mesh had been quoted as high as 90 per cent.

A 2015 study published in the Central European Journal Of Urology looked at how effective injections were among 250 women after three years. It showed 82 per cent were either cured or had a significant improvement in their symptoms.

Helen Johnson, a leading specialist in urogynaecology at Hinchingbrooke Hospital in Cambridgeshire, has been using the injections for years as an alternative form of treatment. She says: ‘The injection has taken a back seat in recent years while the mesh and tape – another surgical option that is still available – have been promoted. Initially, that made sense as results from injections were nowhere near as good.

‘Now, thanks to advances with the injection, its success rate is not far off the mesh or tape. Therefore it makes sense to offer many the injections as a first choice.

‘Some patients suffer stress urinary incontinence because of a prolapse of the womb due to childbirth. In severe cases, surgery is likely still to be the best option.’

Steve Foley, a urogynaecologist at the Royal Berkshire Hospital in Reading, adds: ‘The great thing about the injections is they are minimally invasive and we now have good data on safety and effectiveness.’

During the procedure, 2mm of gel is injected into three or four areas of the bladder neck and it looks like a puffed-up cushion when seen on a scan image.

Ann Wells, 71, from Reading, was first treated with Bulkamid five years ago. She then had a ‘top-up’ injection earlier this year. ‘Mr Foley recommended the injection as the most appropriate and least invasive option,’ she says.

‘It made such a difference to my life. I didn’t need to wear pads again and those embarrassing leaks when coughing, sneezing or walking up a hill were a thing of a past.

‘I was advised at the time that I might need a top-up jab within a few years. So when I became aware of a few little leaks again, I didn’t think twice about asking for a referral.

‘Once again, the results have been remarkable and I would have no hesitation in recommending the treatment to others.’