The smart way to tick up cash of luxury watches rockets

Elegant: The Princess of Wales wears a Cartier Ballon Bleu, helping to raise its appeal

Despite impending austerity, the appeal of luxury timepieces has never been stronger as investors increasingly seek tangible assets as an alternative to equities and cash.

The value of the most sought-after luxury watches has soared by an average of 64 per cent since the start of 2020, according to data collector WatchCharts.

The FTSE All-Share Index, a barometer of UK stock market performance, has fallen 9 per cent over the same period.

Nicola Whittaker, manager of the watch department of auctioneer Fellows, says: ‘Investing in vintage watches is no longer the preserve of the old boys’ club. These days, younger people are increasingly seeing them as a shrewd investment they can turn to in times of uncertainty.’

He adds: ‘Women are also attracted to timepieces as beautiful pieces of jewellery. This growing demand has helped push up watch values.’

There is a hardcore of watchmakers that excite investors. The biggest name is Rolex, but Patek Philippe, Audemars Piguet and Vacheron Constantin are also highly desirable.

Other brands that are sought-after include Omega, JaegerLeCoultre, Breitling, Breguet, A Lange & Sohne, Cartier and Tag Heuer.

The brand is only the starting point as each watchmaker provides myriad models to suit all tastes – as well as wallets.

The market for practical, luxury watches was created 96 years ago when Rolex introduced the ground-breaking Oyster. This was the world’s first waterproof watch – promoted as ‘the wonder watch that defies the elements’.

Richard Smith, a manager at watch trader Blowers, says: ‘Rolex is still the name that attracts the most attention from investors with models such as Daytona, Sky Dweller, Day-Date and GMT-Master II remaining top of their want lists.’

The value of many watches soars before they hit the shops. For example, the Rolex Daytona retails at £12,600, but buyers are willing to pay £28,000.

‘Instead, you must go on a prospective buyer’s waiting list. Such lists are usually only open to favoured customers – individuals who have bought from them before and will buy more than one watch.’

It means that if you fancy a new luxury timepiece, you could struggle to get your foot in the door.

Even favoured customers might be on a waiting list for at least five years. Blowers’ Smith says: ‘The challenge customers face in getting a brand new timepiece has helped fuel the vintage watch market. Over the past five years, the price of the best older luxury watches has increased by up to 20 per cent. We expect this trend to continue.’

This compares with a retail price of £6,600 – if you are lucky enough to get your hands on one. If prices continue to rise as expected, it could be worth five figures within a couple of years as demand outstrips supply.

While investment quality watches are often chunky Rolex timepieces, Smith says the skill of the watchmaker is also key. He adds: ‘Makers such as Patek Philippe make clear-backed timepieces where you can see all the watch movements.

‘These are often made of scratch-resistant sapphire crystal so they do not get damaged.’

Among his favourites is a five-year-old white gold Patek Philippe Annual Calendar that can sell for £50,000. The new retail price of this watch is £46,000. 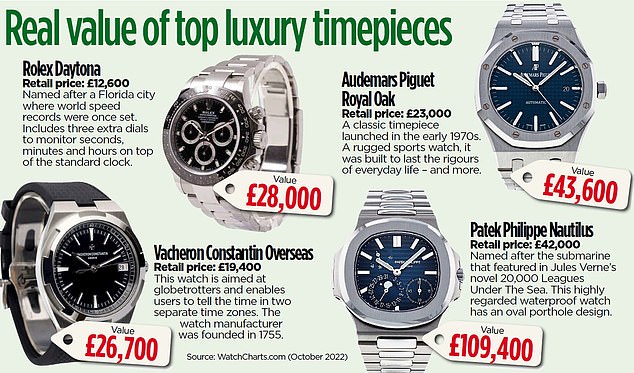 Those without such deep pockets could consider a timepiece from the 1970s. Relative bargains can still be found from this once unloved era. During this decade, traditional wristwatches fell out of fashion as cheap digital watches became mainstream.

One of the first digital examples – the Hamilton Pulsar ‘time computer’ as worn by the actor Lee Majors in the 1970s hit show The Six Million Dollar Man – can sell for as much as £1,000.

Smith says: ‘In the 1970s, the way people wore watches changed dramatically – with many preferring a cheap timepiece rather than a classic old watch. But as they are being rediscovered, prices are going up.’

He adds: ‘Nowadays the modern smartphone is being used like the old pocket watch – with people taking it out to check the time. It means the traditional wristwatch is no longer required as a necessity to check time, but is increasingly worn as a luxury accessory for special occasions.’

This appeal of wearing a finely engineered work of art on your wrist that doubles as jewellery is attracting women investors.

Whittaker, of Fellows, says: ‘Female celebrities help increase the appeal of certain watches and raise their value. For example, the Princess of Wales wears a Cartier Ballon Bleu while Princess Diana used to enjoy having a Cartier Tank Louis on her wrist.

‘These are beautiful timepieces that are also practical.’

Condition is key when it comes to investing in a vintage timepiece – most watches depend on more than 150 intricate parts to make them work. As a result, it is best to buy face-to-face from a specialist dealer who can provide you with a 12-month warranty against any faults.

Ideally the price you pay for a watch should include the cost of a service. A luxury watch should be serviced at least every five years.

Whittaker says: ‘Unfortunately, the vintage watch market is flooded with fakes and so-called Frankenstein watches that look fine on the outside, but where the internal mechanisms are not original. A professional watch trader will check on the provenance of any watch.’