Packaged up to entice the health-conscious, we are led to believe drinks bursting with fruit or vegetables are better for us.

But healthy smoothies sold across the UK can contain the same amount of sugar found in nearly eight Krispy Kreme doughnuts.

A MailOnline investigation has revealed some 750ml bottles – often drank over the course of a day – have almost 100g of sugar.

In comparison, one of Krispy Kreme’s Original Glazed doughnut contains 12.6g of sugar. While smoothies have health benefits from vitamins and fibre, experts have branded the findings ‘shocking’.

Manufactures have stated the sugar found in smoothies is naturally occurring and a 150ml serving counts as one of your five-a-day.

However, nutritionists hit back and said people rarely take notice of portion sizes and it’s unhealthy to consume high amounts of any form of sugar.

So-called healthy smoothies have up to eight times the amount of sugar than a Krispy Kreme doughnut, with up to 97.5g of sugar in a 750ml bottle (ASDA and Innocent Pomegranate Magic)

Adults should have no more than 30g of free sugars a day – roughly equivalent to seven sugar cubes.

In real terms, this means adults could have three times their daily recommended sugar allowance by guzzling a whole smoothie bottle.

Katharine Jenner, a nutritionist at Action on Sugar said: ‘These results are quite shocking when it comes to sugar content.

‘Even if they have some added vegetables like spinach or kale, they are still likely to be high in sugar.’

Free sugars, also known as added sugars, include those added to doughnuts, as well as yoghurts, cereals, biscuits and fizzy drinks.

While the sugar content in smoothies is mostly derived from fruit and vegetables, they technically count as free sugars.

This is because when fruit and veg are blended, the natural sugars are released from within the cell walls and become ‘free sugars’.

Dr Saul Konviser, from the Dental Wellness Trust, said: ‘Many people are not aware just how sugary these supposedly “healthy” smoothies really are.

‘There are no “good” sugars as such.’ 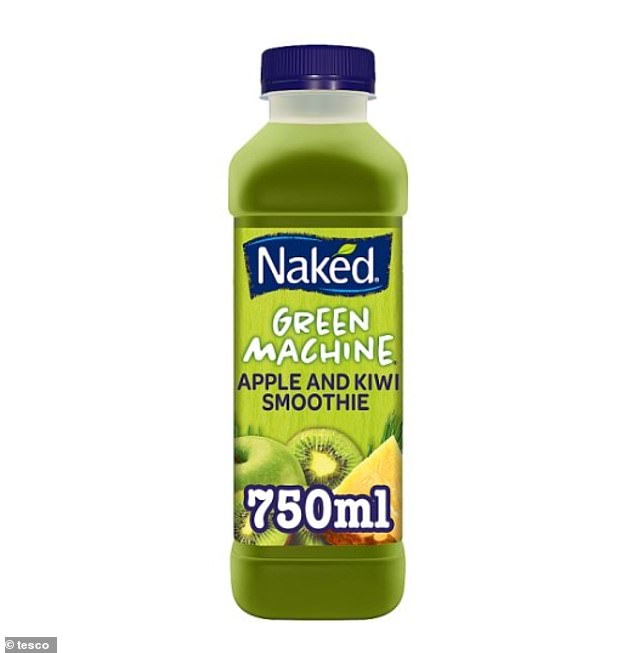 Smoothies are often branded to entice the health-conscious consumer. But their sugar content has been labelled as ‘shocking’ by Action for Sugar. Pictured, Naked Green Machine containing 82.5g in its 750ml bottle

All of the products were sold as 750ml. The smoothie that had the lowest sugar content – Savse Super Blue Smoothie – contained 66g.

By comparison, a can of Coca Cola contains 10.6g of sugar per 100ml, according to nutritional information on the drink giant’s website.

While doughnuts have less sugar than the smoothies, they aren’t comparable in fat, calories, or nutritional benefit.

A fruit smoothie will contain vitamins, minerals and fibre, whereas a doughnut has virtually no health benefits.

Children aged four to six years old should be limited to a maximum of 19g per day, according to Government guidelines.

Smoothie brands told MailOnline that their products contain no added sugar and they recommend drinking 150ml or less as a normal serving size – the same sizing recommended by the NHS.

However, experts say it’s unlikely a consumer will stop there. 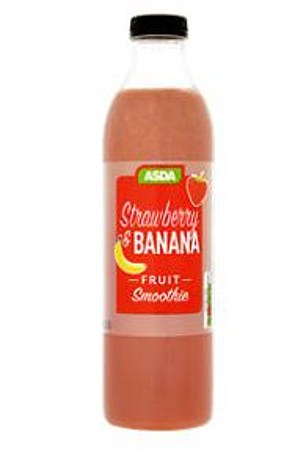 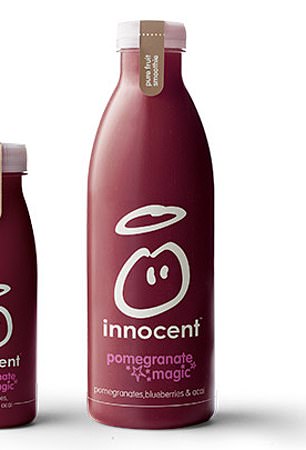 ASDAs Strawberry and Banana smoothie was one of the worst offenders, with 97.5g of sugar per 750ml. Innocent Pomegranate Magic also came high in sugars

HOW TO UNDERSTAND NUTRITIONAL INFORMATION ON YOUR FOOD

The vast majority of packaged foods in the UK come with nutritional information printed on the label.

The main things to look for are fat, saturated fat, salt (which may be called sodium), fibre and sugar – which is often listed as ‘of which sugars’ beneath carbohydrates.

Some supermarkets also label nutritional value with a traffic light system, in which more green points to healthier food.

The NHS advice on what is high or low is as follows:

An adult’s recommended daily allowance (RDA) of fat is around 70g.

High: more than 5g of saturated fat per 100g

An adult’s RDA of saturated fat is around 20g.

Sugars (aka of which sugars)

An adult’s RDA of sugars is around 90g.

An adult’s RDA of salt is 6g or less.

Kim Pearson, a qualified nutritionist based in London, told MailOnline: ‘In reality this is a very small serving and many of us consume far more.

‘It’s very possible to consume a full 750ml bottle in a day. Especially if you think you’re drinking something healthy.

‘Many of us don’t spend much time reading labels and we’re much more strongly influenced by the overall look of the product rather than the detail.’

She added: ‘The marketing of “green” and “berry” smoothies make us believe they’re healthy.

‘But the truth is that consuming large amounts of sugar, whether from natural or processed sources, is not good for our health.’

Action of Sugar is demanding mandatory front of pack labelling clearly outlining the sugars from free sugars on all products.

The issue is that companies are only legally required to label ‘total sugars’, making it impossible for consumers to know how much of those are added.

Aisling Pigott, a spokesperson for the British Dietitian Association, agreed that labels can be difficult to understand.

She said: ‘These smoothies are often served in large bottles which exacerbates the problem. One smoothie container can actually contain three or four portions.

‘Drinking a smoothie or juice is less filling than eating the same volume of fruit or veg, which makes it easier to over-consume.’

Ms Pigott added: ‘This highlights the importance of being aware of recommended portion sizes.

‘There is nothing wrong with either doughnuts or smoothies and both have pros and cons. Portions size and frequency consumed are key to health.’

Adults in the UK consume more than double the recommended amount of sugar, according to Public Health England.

WHAT DO THE MANUFACTURERS SAY?

All the supermarkets and brands named in the article have been contacted for comment by MailOnline.