Members of ‘The Squad’ have approved of Nancy Pelosi’s announcement to launch an official impeachment inquiry into President Donald Trump.

They encouraged the House Speaker’s condemnation of Trump for allegedly ‘calling upon a foreign power to intervene in his election.’

It’s claimed that he instructed aides to withhold military aid days before speaking to Ukraine’s leader Volodymyr Zelensky about Joe Biden and his son Hunter.

The conversation in July was believed to be about digging-up dirt on his potential future opponent for the presidency.

On Tuesday, the President admitted that ‘there was pressure put on with respect to Joe Biden,’ while stranding next to wife Melania at the United Nations General Assembly.

He added: ‘What Joe Biden did for his son that’s something they should be looking at.’ 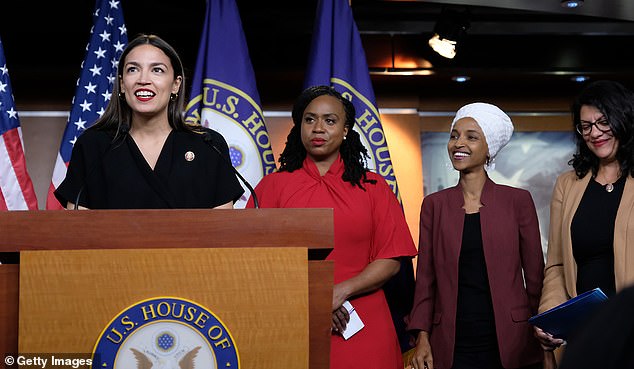 Members of ‘The Squad’ seemed to relish in the news online and in interviews. The group consists of (L-R) Representatives Alexandria Ocasio-Cortez (NY), Ayanna Pressley (MA), Ilhan Omar (MN) and Rashida Tlaib (MI) 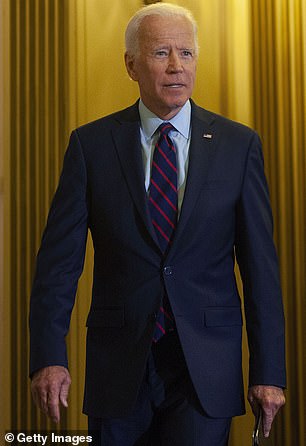 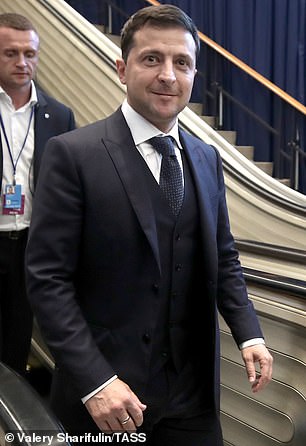 The decision to take action was made after Trump allegedly withheld foreign military aid from the Ukraine before speaking to President Volodymyr Zelensky (right). On the phone call it’s claimed that Trump put pressure of the leader to investigate Joe Biden (left)and his son Hunter

Previously, Pelosi and some other members of the Democrats had seemed reluctant to pursue impeachment proceedings against Trump.

But after 172 Democrats in the House of Representatives came out in support of the plan, she revealed the plan to impeach to the public.

Pelosi said that the actions constituted a ‘violation of the law’ that would ‘undermine both our national security and our intelligence.’

‘The Squad’ – who consist of Alexandria Ocasio-Cortez, Ilhan Omar, Ayanna Pressley and Rashida Tlaib –  have come out in favor of the call during interviews and online.

During an interview with CNN, Omar praised Pelosi for biding her time before she took action against the President.

She and the other three progressive members of the party had previously pushed for impeachment earlier.

‘I think that as the speaker used to say, “This president is in the process of self-impeachment” and this is the straw that broke the camel’s back,’ Omar said.

She went to add that ‘the President clearly thinks he is above the law’ by pressuring a foreign power ‘to dig dirt on a potential presidential opponent.’

‘That is very unconstitutional and we must hold him responsible,’ she added.

Meanwhile Ocasio-Cortez claimed that Trump had committed ‘several impeachable offences’ that she felt could be taken into consideration, while talking to reporters. 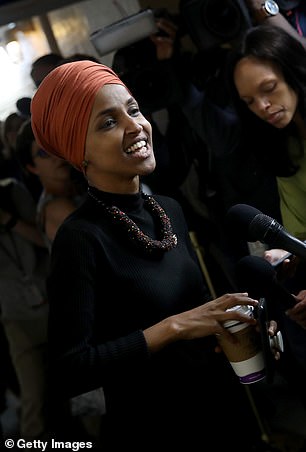 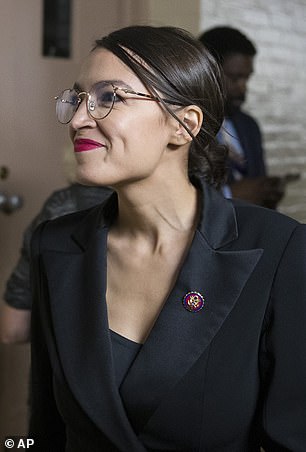 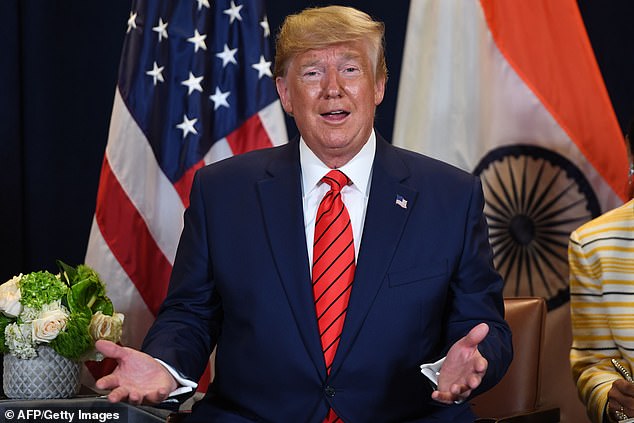 President Donald Trump (above) has fought back against the attacks by Democrats declaring  it as a ‘total witch hunt.’ Later he announced that his team had been given permission to release a transcript of his conversation with Ukrainian President Zelensky 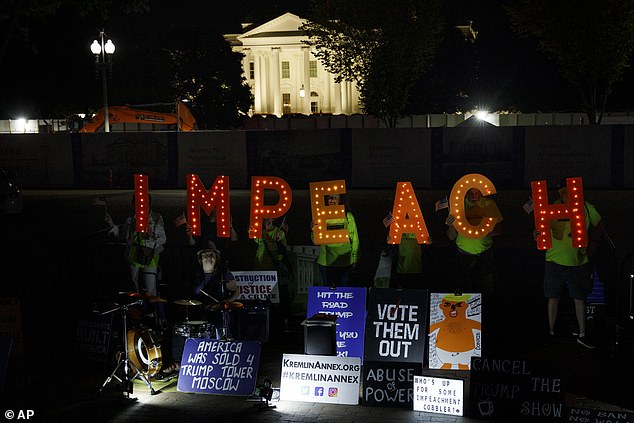 Protesters with ‘Kremlin Annex’ called to impeach President Donald Trump in Lafayette Square Park in front of the White House in Washington, on Tuesday evening

She was asked about a comment she made, where she stated that not moving forward with impeachment would be a bigger scandal than Trump’s actions.

Ocasio-Cortez said: ‘We have to hold this president accountable and we have to protect our democracy, and I believe that we’ll be doing so right now.’

Tlaib posted on Twitter ‘In light of today’s news, #TickTockTrump’ and accused him of ‘putting his personal interests before our country.’

‘EVERY member of Congress must go on record and decide if they will finally use their power to hold Trump accountable,’ she also wrote.

Tlaib was greeted by cheers earlier on Tuesday by supporters shouting ‘time to impeach’ who applauded her.

Pressley also wrote: ‘Good morning, it is absolutely time to impeach the occupant of the @WhiteHouse.’

Late on Tuesday, President Trump tweeted that Secretary of State Mike Pompeo had received approval from the Ukraine Government to release the transcript of the phone call.

‘They don’t know either what the big deal is. A total Witch Hunt Scam by the Democrats!’ he added. 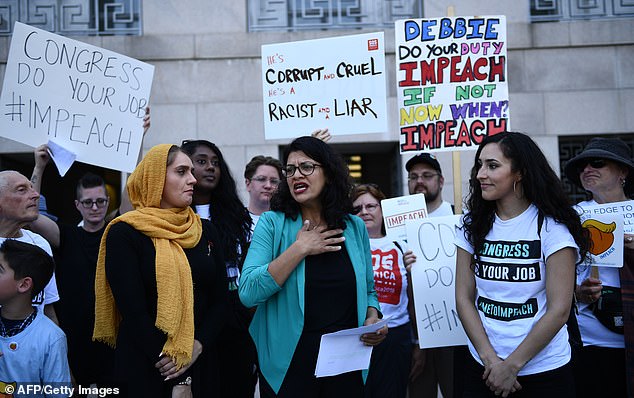 Tlaib (center) joined activists asking for impeachment of US President Trump as they gathered on Capitol Hill on September 23 in Washington D.C. 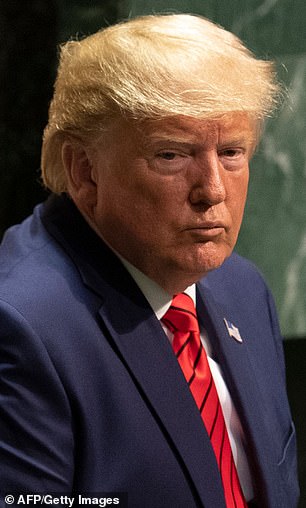 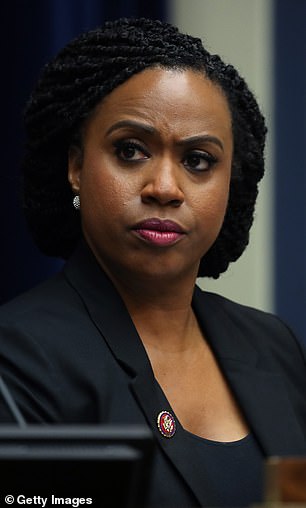 Trump has blasted the comments by the Democrats as ‘Presidential Harassment’ online. put Pressley (right) wrote in a short statement on Twitter that it was ‘absolutely time to impeach the occupant’ of the White House

Before the tweet he had condemned the Democrats for ‘PRESIDENTIAL HARASSMENT’ and accused their actions of being ‘So bad for our Country!’

Other Democratic representatives also spoke out in favor of impeachment including John Lewis of Georgia who said: ‘The future of our democracy is at stake.’

‘This is the president basically saying “Yes I colluded, what are you going to do about it?”‘ said Tom Malinowski, of New Jersey

Dean Phillips of Minnesota said: ‘I think we have no other choice… This behavior at best is unethical and corrupt, at worst it’s treasonous.’

Joe Biden also spoke out in favor of the call for an impeachment inquiry.

In a tweet he wrote: ‘Pressuring the leader of another nation to investigate a political opponent — to help win an election — is not the conduct of an American President.’ 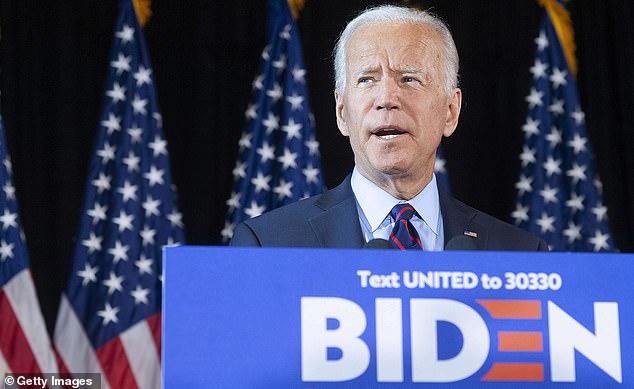 Biden added: ‘President Trump’s actions are an abuse of power. They undermine our national security. They violate the oath of office.

‘If we allow a President to get away with shredding the United States Constitution — that will last forever.’

‘Pursuing the leader of another nation to investigate a political opponent to help win his election is not the conduct of an American President.’

Senator Mitch McConnell tried to downplay the incident while speaking to the press, where he stated: ‘Well we’re going to find out what happened.

‘Fortunately it finally happened and I’m glad about that.’